RS Chairman Venkaiah Naidu has once again refused to revoke the suspension of 12 opposition MPs, saying actions of MPs amounted to ‘sacrilege’. 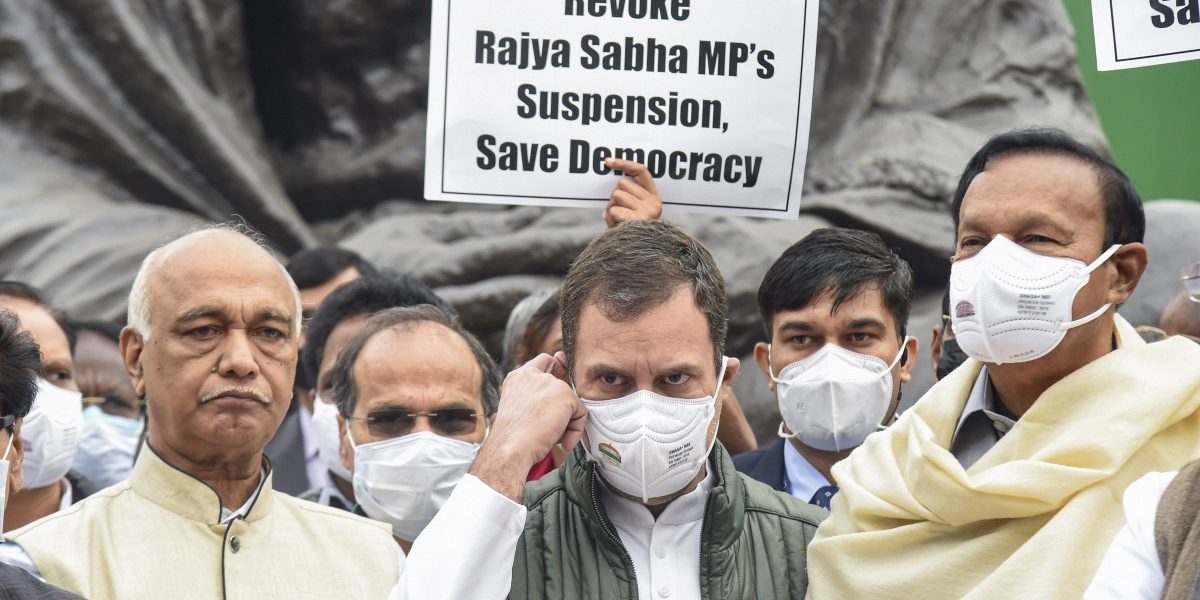 Congress MP Rahul Gandhi and other leaders during a protest over suspension of 12 Rajya Sabha MPs, near the Mahatma Gandhis statue at Parliament, in New Delhi, Wednesday, Dec 1, 2021. Photo: PTI

New Delhi: As the Opposition members in the Rajya Sabha again continued with their protest seeking revocation of the suspension of 12 MPs, Chairman Venkaiah Naidu adjourned the house once again.

Meanwhile, suspended MPs continued with their protest in front of Mahatma Gandhi’s statue in the Parliament complex, where they were joined by Congress leader Rahul Gandhi.

As soon as Rajya Sabha assembled for the day at 11 am, opposition members demanded that the suspension of the 12 MPs, who had been suspended in connection with their protests on the last day of the Monsoon Session in August, be revoked.

However, Naidu refused to do so and termed the actions of the suspended MPs “disdainful”.

Addressing the members who raised the issue in the house today, Naidu said: “Some of the respected leaders and members of this august House, in their wisdom, chose to describe the suspension of 12 members as ‘undemocratic’. I have struggled to understand if there was any justification in that kind of a narrative being propagated but could not.”

The Chairman said that the actions of the suspended MPs amounted to ‘acts of sacrilege’.

He added: “While calling this suspension undemocratic both within and outside the House, not even a word is being said about the reasons given for the suspension, the disdainful conduct of some members during the last session, which I have categorically called as ‘acts of sacrilege’ on the last day of last session.”

Not satisfied with the chair’s explanation, opposition members continued with their protests and raised slogans. At this Naidu adjourned the House. The house is later expected to take up The Dam Safety Bill for consideration and passing. It has been on the agenda since Monday.

The Lok Sabha rules also state that “the Member who gives notice may make a short statement and such of the Members as have previously intimated to the Speaker, may be permitted to take part in the discussion. The Member who raises the discussion has no right of reply.  At the end of the discussion, the Minister concerned gives a brief reply.”