The evasive defences put forth all point to one simple question: when and how did the Reliance and Dassault joint venture come about?

An Indian Youth Congress member carries a model of plane during a protest over Rafale deal issue outside the AICC office in New Delhi, on Saturday. Credit: PTI Photo/Ravi Choudhary

New Delhi: Forty-eight hours after former French president Francois Hollande’s remarks re-ignited allegations of crony capitalism over the 36-aircraft Rafale deal, the Modi government has remained on the back-foot, relying on weak denials and pushing forth evasive narratives that seek to place blame on the previous UPA-II administration.

Over the past two days, there have been two statements from India’s defence ministry, one from the French government, one from Dassault Aviation, a couple of political party press conferences and most recently a statement put out by finance minister Arun Jaitley.

At the end though, here’s how the most relevant parties roughly stand:

1. Modi government: We had no role in selecting an offset partner.

2. French government: We had no role in selecting an offset partner.

3. Dassault: Selecting Reliance was our choice .

4.  Former French president who negotiated deal: We were told by India to partner with Reliance.

Reliance Defence, which over the last few months has sent a large number of defamation and cease-and-desist notices to media houses, has chosen to maintain silent in the face of the controversy triggered by Hollande’s remarks, although presumably it agrees with Dassault’s statement.

What is the Centre’s defence?

The Modi government has settled on two primary means of going on the offence. The first is to point towards news agency’s AFP reporting on Saturday, in which it quoted Hollande as saying he was unaware if India had put pressure on Reliance and Dassault to work together and that “only Dassault can comment on this”.

Jaitley, in particular, has used this to imply that Hollande is either contradicting himself or a victim of mis-reporting.

As The Wire and others have pointed out, this claim is wrong on two counts.

Firstly, the English-version of the AFP report is a trimmed-down copy of its French version, the latter of which Le Monde has published. The French copy includes an extra paragraph (shown below) that states Reliance’s name appeared in the context of a new Rafale deal, which was decided by the Modi government after it came to power.

English translation: “Asked by Agence-France Press on the sidelines of a conference in Montreal on Friday, Mr. Hollande said that the name of Reliance Group had appeared as part of a ‘new formula’ in negotiations over the Rafale deal, decided by the Modi government after it came to power.”

This lines up with Hollande’s earlier remark – that it was the Indian government that proposed Reliance as a partner – rather than contradicting it, as Jaitley claims.

Secondly, it’s possible that during the formal negotiations – or informal discussions – over the inter-governmental agreement, the Modi government did put forth Reliance’s name and then let Dassault and the Anil Ambani-led firm negotiate on the finer points.

This would gel with Hollande saying that he was “unaware” of whether India had exerted “pressure” specifically on Dassault to work with Reliance.

Will Hollande speak more? This seems almost a certainty now that the Indian government has chosen to specifically highlight the conflict of interest issues that the French media has raised against the former president.

Mediapart, the French investigative website that broke the story, has indicated that it has audio recordings of the interview with Hollande, which could also be released at some point. In any case, Hollande’s office told NDTV on Saturday that the former president stood by what he had told the French website.

What about the Mukesh Ambani-Reliance narrative?

The other defence put forth by the Modi government is to show that in 2012, Dassault Aviation had entered into an MoU (memorandum of understanding) with the Mukesh Ambani-led Reliance Industries to ostensibly implement offsets as part of the earlier 126-aircraft Rafale deal if and when it was eventually green-lighted by the UPA-II government.

The existence of the 2012 MoU with Anil Ambani’s brother has been used in a number of ways, even though the two siblings run completely different corporate groups and do not enjoy good business relations. The defence ministry and law minister Ravi Shankar Prasad on Saturday tried to imply that the seeds for the current Reliance-Dassault partnership – which has attracted criticism from Opposition parties – was sown back in 2012.

A few defence commentators have tried to make similar arguments, indicating that one is an implicit continuation of the other or at the very least that Anil Ambani was chosen as an offset partner because of Dassault’s earlier partnership with his brother.

Jaitley goes one step further, nothing that “Rahul Gandhi’s misplaced criticism [on the current Rafale deal] could equally apply to the 2012 MoU”.

This line of argument by the defence ministry and Jaitley is questionable.

They both leave out many things including:

3) The 2012 partnership between RIL and Dassault was effectively dissolved in 2014. Dassault then went in search of new partners and actually approached other companies.

4) There was no charge of cronyism against Mukesh Ambani’s partnership with Dassault in 2012. That allegation exists now in light of a hastily-changed deal that dropped Hindustan Aeronautics Ltd and Reliance Entertainment’s indirect funding of a film production headed by Hollande’s partner, Julie Gayet.

When was the Reliance-Dassault JV formed? And did they know the deal was going to be changed?

Both the Modi government’s defences actually raise two other questions: When did Dassault know that the deal was going to be changed from a 126-aircraft sale involving co-production with HAL to a smaller 36-jet purchase? And when was the Dassault-Reliance JV formed?

As The Wire has reported in detail, the decision by Modi to change the deal was taken under highly secretive and confidential conditions. Manohar Parrikar, the-then defence minister, was hurriedly told just before the prime minister left for Paris to make the announcement.

India’s foreign secretary at the time was not kept in the loop. And to add to the confusion, Dassault CEO Eric Trappier had made an on-the-record statement only two weeks earlier where he noted that the 126-aircraft deal was “95% complete” and that a work-share agreement had been signed with HAL.

While news of the Reliance-Dassault joint-venture was only formally announced in October 2016, it’s clear that the partnership was in the works just weeks (minimum) or a couple of months (maximum) after the new deal was announced by Modi in the first week of April 2015.

A Dassault Aviation press release from 2018 notes that the JV was formed in April 2015 – within days of Modi making the announcement to change the deal. 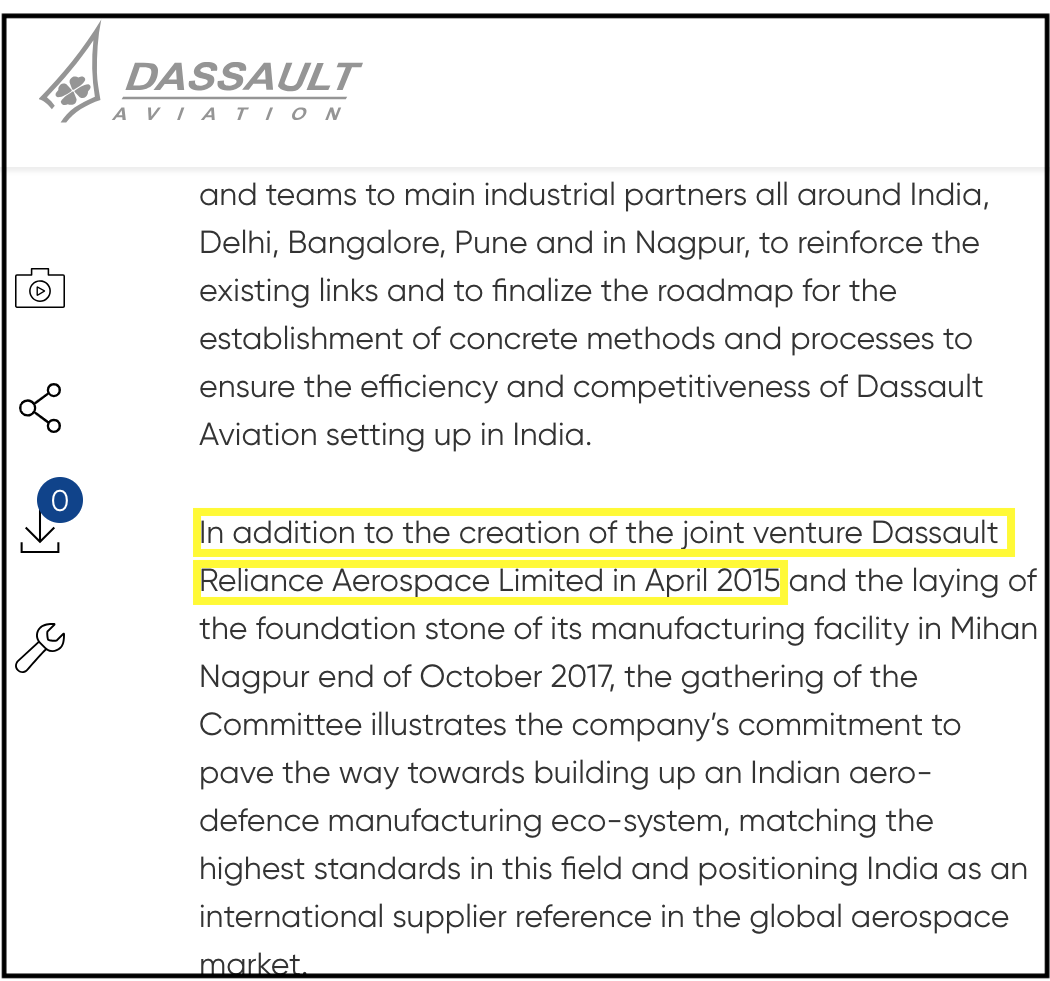 The Wire has sent a questionnaire to the company to double-check the information put out in their press release. But even if this happens to be a mistake, it’s clear that Anil Ambani and Dassault quickly forged an arrangement in the following weeks.

Some time in June 2015, the Reliance Group made a presentation to the Maharashtra state government for the allotment of 289 acres of land at a special economic zone (SEZ) outside Nagpur. When it was eventually allotted two months later, the company announced that it would invest Rs 6,500 crore in building a greenfield aerospace equipment manufacturing centre.

In the allotment letter dated August 27, 2015, which is available at the website of the state government-run Maharashtra Airport Development Company, the authorities note that the land is being allocated to Reliance Aerostructures Ltd as a “co-developer with a globally acclaimed original equipment manufacturer (OEM).” This OEM, as it turned out, was none other than Dassault Aviation.

A quick timeline, therefore, is in order.

In March 2015, Anil Ambani’s Reliance acquires Pipavav Defence, an acquisition that it has used as a justification for being chosen as an offset partner in the Rafale deal, noting that it is a leader in “several areas of defence manufacture”.

A month later, in April 2015, the prime minister announces a huge change in the Rafale deal, that by all accounts, takes everybody by surprise. “Anil Ambani, who attended Modi’s meeting with defence chief executives in Paris, reportedly held a long discussion with Dassault chief Eric Trappier,” defence journalist Ajai Shukla wrote on rediff.com on April 14, 2015.

While formal incorporation of Dassault Reliance Aerospace Ltd took place in February 2017, depending on various publicly available documents it would appear that the joint venture between Reliance and Dassault began functioning as an effective partnership in the same month as Modi’s announcement or at the very least, within the space of a few weeks after the announcement.

All of this lends credibility to Hollande’s full remarks to AFP, which state that Reliance’s name came in the context of a “ ‘new formula’ of negotiations in the Rafale deal, decided by the Modi government after it came into power”.