Gandhi also alleged that the deal was struck to save Anil Ambani, who was carrying a Rs 45000 crore debt at the time, from bankruptcy as there was no reason that his inexperienced company should have replaced an aerospace giant like the HAL. 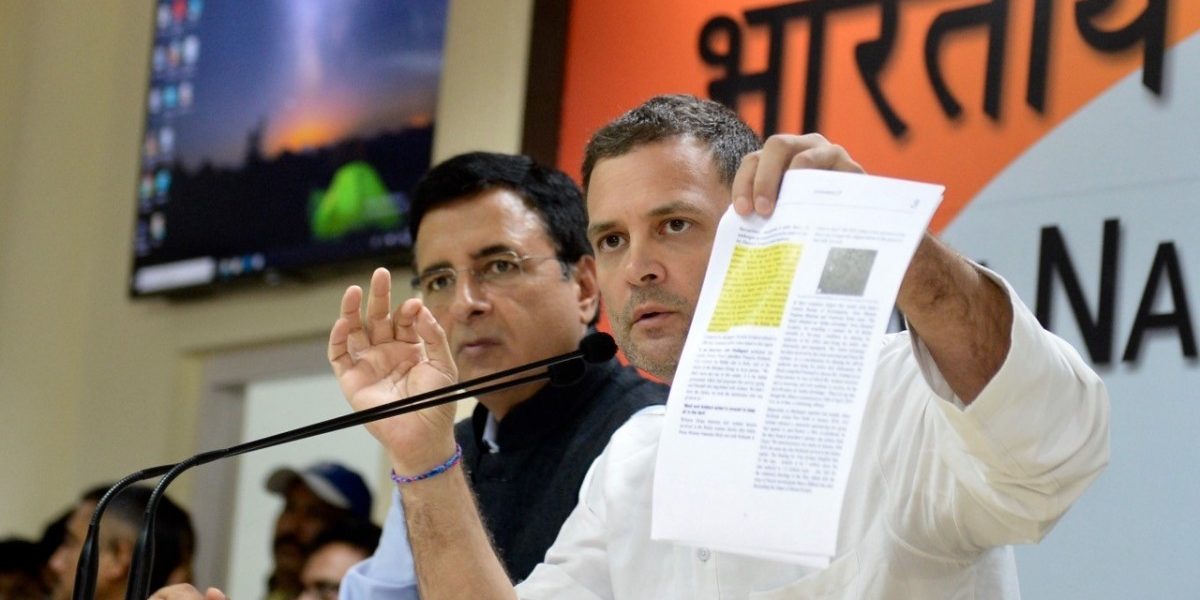 New Delhi: In light of admission by the Dassault Aviation’s senior executive that the partnership between the French aerospace company and the inexperienced Anil Ambani-owned Reliance Defence Limited (RDL) was “mandatory” and “imperative” to secure the Rafale contract, Congress president Rahul Gandhi launched yet another attack on the Narendra Modi government, calling the PM ‘corrupt’, and reiterating his allegation that the aircraft deal was nothing but a blatant case of cronyism.

Addressing a press conference in Delhi on October 11, Gandhi said that after Francois Hollande – the former French president who struck the deal with Narendra Modi – divulged that it was the Indian government that suggested RDL as the offset partner in the contract, Dassult’s deputy chief executive officer Loik Segalen’s statement clearly indicates that RDL’s sudden entry into the scheme of things was a result of the prime minister’s benevolence.

“According to an internal document from Dassault obtained by Mediapart, the alliance between the French Company and Anil Ambani’s Reliance Group was a “compensation” for the purchase of Rafales. The document contains a summary by staff representatives, who were present in presentation of the Dassault Reliance Aerospace joint-venture plant in Nagpur made to them on May 11, 2017 by Dassault Aviation’s chief operating officer, effectively the group’s second most powerful executive, Mr. Segalen. According to the summary, Mr. Segalen told the representatives: ‘it was imperative and obligatory for Dassault Aviation to accept this compensation in order to obtain the Rafale India export contract’.”

The purchase of 36 Rafale fighter jets by the Modi government in 2015 blew into a full-blown controversy after the RDL replaced the public sector undertaking Hindustan Aeronautics Limited (HAL) as the offset partner of Dassault. Moreover, the cost at which the jets were bought was almost three times higher than what was negotiated by the UPA government.

In this context, Gandhi said that the deal was struck to save Anil Ambani, who was carrying a Rs 45000 crore debt at the time, from bankruptcy as there was no reason that his inexperienced company should have replaced an aerospace giant like the HAL.

“The prime minister had said he did not want to become a prime minister but a chowkidaar (security guard for the nation). But we now know that the PM is not the PM of India but the PM for the Ambanis. The farmers of India are facing their worst-ever crisis, but our PM is guarding Anil Ambani. Now that both the French President and the second senior-most executive of Dassault have confirmed our allegations, we are again demanding a joint parliamentary probe, which the government had dismissed earlier,” Gandhi said, adding that Modi helped Anil Ambani pocket crores of Indian people’s money.

Corroborating these charges, he once again said that the current French President Emmanuel Macron had told him personally that there was no secret pact between the two nations about keeping the prices of Rafale jets a secret. The Congress president first made this claim in the parliament, during the no-confidence motion against the government a few months ago.

Although the opposition has been raising serious issues on Rafale for more than a year now, the NDA government has chosen not to respond to the charges against it and has not come out with factual rejoinder on the issue as of now. This has caused further embarrassment for the NDA government for its failure to take on the charges against it in a transparent and comprehensive way. Most of the BJP members have either laughed the charges off or have presented incomplete arguments.

The Congress president has been addressing the press directly on Rafale deal in an attempt to turn the government’s silence to his party’s advantage. “…the reality is that the Prime Minister is corrupt. The Prime Minister of India is a corrupt person but he came to power on the expressed promise of fighting corruption,” Gandhi said.