The chariot festival was well-organised only on paper. 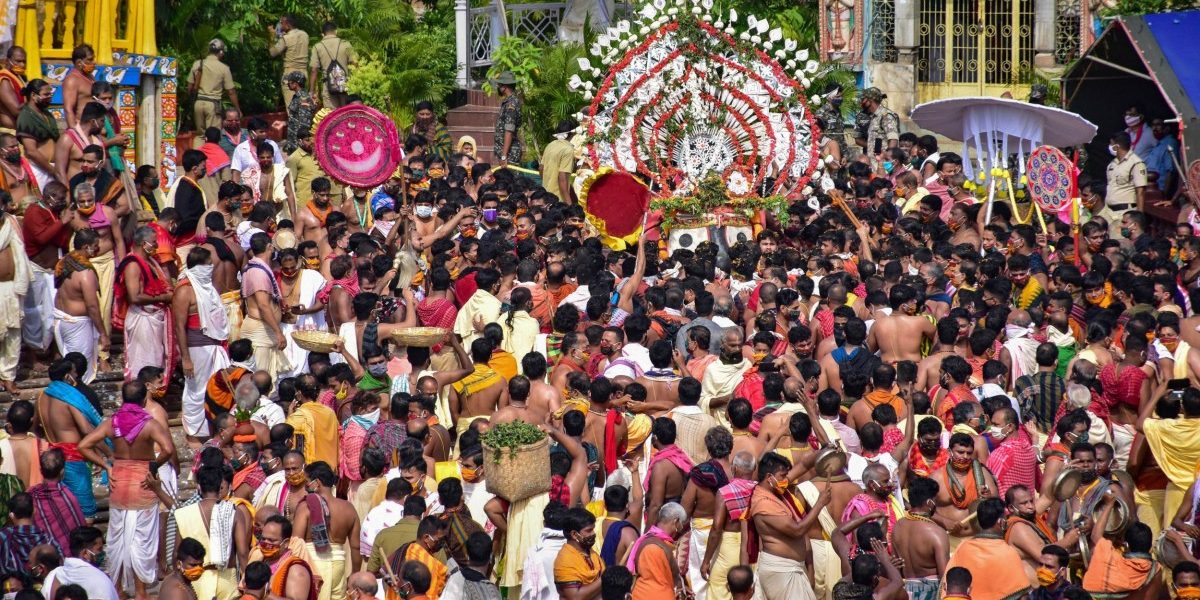 Devotees during the Puri Rath Yatra on Tuesday. Photo: PTI

The way the Ratha Yatra – or Rath Jatra in Odia (as this author personally prefers) – of Lord Jagannath in Puri, Odisha, is being handled, it’s likely to remain a significant issue as the novel coronavirus epidemic rages through India, assisted by poor state planning and poorly implemented public health protocols like physical distancing. After the Chief Justice of India reversed his own decision in a matter of days to allow the chariot to roll on the Grand Road of Puri, the Government of Odisha, the Union government and the Supreme Court of India now stand accused of allowing a bad problem to become much worse.

The chariot festival got underway earlier this week much to the elation of millions of Odias, with live TV taking the place of devotees thronging the streets. The chronology seems to have been as follows, in hindsight. The state government was first not sure what had to be done and allowed preparations for the festival to proceed. It remained mum even as the number of COVID-19 cases increased, and eventually passed the buck to the Centre, which until then had been opposed to large religious gatherings. Then, an NGO, allegedly backed by the state government, filed a PIL in the Supreme Court asking for a stay on the festival. The state counsel agreed to it, but then public sentiment seemed opposed to the idea of skipping the festival. So at the last minute, the Centre and the state agreed to make arrangements, and Chief Justice S.A. Bobde reversed the court’s pronouncement from his home in Nagpur. And so the yatra began.

Odisha’s response to the novel coronavirus outbreak received favourable feedback until recently. But in the month preceding Ratha Yatra, the state reported an 80% increase in the number of COVID-19 cases even as its testing rate dropped. Hindustan Times reported that a breakdown of critical testing facilities, skilled manpower shortage and were to blame.

By way of caution, the apex court ordered all 1,143 functionaries involved in the rituals to be tested. The district administration complied – and complied quickly. This is curious because the court’s order came late in the day and over 1,100 samples had to be tested, yet so many RT-PCR tests could be conducted so quickly. One functionary did test positive, which is a matter of concern.

From an epidemiological point of view, as the number of COVID-19 cases are on the rise in every part of India, and its doubling rate holding at once every 18 days, a large gathering – whether of devotees or of rallies by opposition political parties, which have also been happening – would be a strict no-no. One wonders what Dr Srinath Reddy, a top public health expert whom the Odisha government has been consulting for its COVID-19 response, might have said.

Anyone who has watched a Ratha Yatra knows that physical distancing – as the apex court ordered – is simply not possible. There is also no way  the Ministry of Home Affairs’ guidelines on reopening religious centres in the phase of the lockdown’s easing will be followed. Footage of the yatra earlier this week also shows that nearly none of the people out in the streets were wearing masks. So as such, the festival was well-organised only on paper. In practice, it risks causing the number of cases in the state to surge, as well as set a poor precedent for the conduct of future festival, congregations, etc.

There is also the ethical question. While Odias in general approved of the Rath Yatra, it is anyone’s guess as to how many demanded that the thousands of police personnel, hundreds of healthcare workers and scores of administrators putting themselves at risk to organise and conduct the festival were afforded additional protection, both during and after. 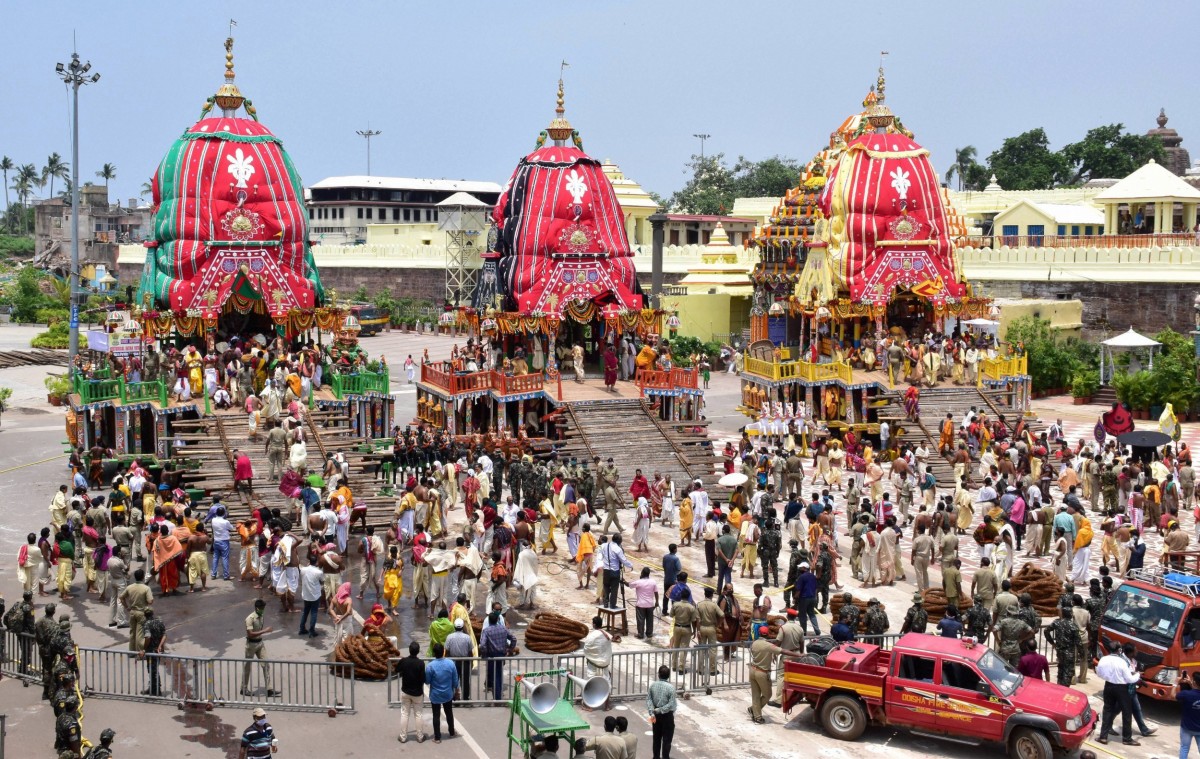 Devotees during the Puri Rath Yatra on Tuesday. Photo: PTI

All said, the Supreme Court’s conduct takes the cake – for getting into everything it has acknowledged it shouldn’t be getting into. CJI Bobde had said in an interview that the executive with its ‘three Ms’ – money, men and material – was better suited to handling COVID-19 issues. But in his first judgement, CJI Bobde said that Lord Jagannath would not forgive him and his fellow judges if the Ratha Yatra was allowed to take place.

Subsequently, the court listed the PIL, heard the matter twice, and the second time even moved it to a three judge bench even as it was listed for review before the lone Justice S.R. Bhat. It seems even the Supreme Court of India, like god, acts in mysterious ways. In this time, the Odisha government went from insisting that it wouldn’t be able to prevent a large crowd – of 10-12 lakh – on the streets of Puri during the festival to saying it could conduct the festival without any congregations.

The apex court had first cited Article 25 of the Constitution to stay the festival; it admits health concerns as a reason to restrict religious activities. But senior advocate K.V. Viswanathan, arguing in favour of the yatra, said that by conducting the festival as well as streaming it live, the Odisha government would be able to “correctly balance” both Articles 25 and 26 of the Constitution. (The latter pertains to the “freedom to manage religious affairs subject to public order, morality and health”.) Perhaps it will only be a matter of time before religious organisations of all hues throng the courts promising such ‘correct balancing’.

In India, COVID-19 and religious congregations have come to be synonymous with the Tablighi Jamaat congregation. The Tablighi Jamaat is a missionary movement and its annual meet in Delhi in early March this year came to be called a “super-spreader” after hundreds of its participants tested positive for the novel coronavirus. However, a nationwide demonisation followed after political leaders as well as some sections of the mainstream press began to accuse all Muslims of hampering the country’s response to the pandemic and singled the congregation out for blame for the rising number of cases.

Also read: No, the Supreme Court Didn’t Cause the Economic Slowdown

While the yatra’s organisers have defended themselves by saying it was conducted only after testing all individual participants – which wasn’t the case with the Jamaat – we have also become aware of the limitations of testing, including at which stage of the disease, as well as the importance of contact-tracing, physical distancing and wearing masks in public.

If the Tablighi Jamaat was wrong to have organised its convention in the middle of a pandemic, and at a time when we knew little about the virus or how to deal with it, the 2020 Rath Yatra was wrong as well, as it has been conducted at time when we know only marginally more about the virus and its effects. Indeed, for most of June, India has been reporting over 10,000 new cases each day and the epidemic’s peak is nowhere in sight. Religion could very well have taken the backseat – but didn’t.

In the final analysis, the Ratha Yatra of 2020 seems to have been a political football that regional and national parties have abused to score brownie points. Both the state government and the Centre seem intent to take responsibility for the things that went right and pin blame on the other for those that went awry – including, as the next few weeks will tell, the COVID-19 trajectory in Odisha.

The Ratha Yatra holds a special place in the hearts of most Odias (including this author). A dominant narrative of the yatra is that the Lord Jagannath will exit his abode and meet his devotees, who have come to visit him from different places. But the year 2020 hasn’t been a normal one in many ways, most of all due to the coronavirus pandemic, but neither court nor government allowed this to affect the festival – at least not beyond forcing the lord to visit devotees through a television screen or smartphone. Could there have been an alternative more in keeping with scientific knowledge? Perhaps, especially if the state government had started planning in advance. Then again, when was the last time religion and science were on the same page in India?