What Is Affecting the Performance of the Public Sector?

Most of the ‘reforms’ that are being introduced to address poor delivery of social services are silent on the issue of inadequate human resources, among other shortfalls in capacity. 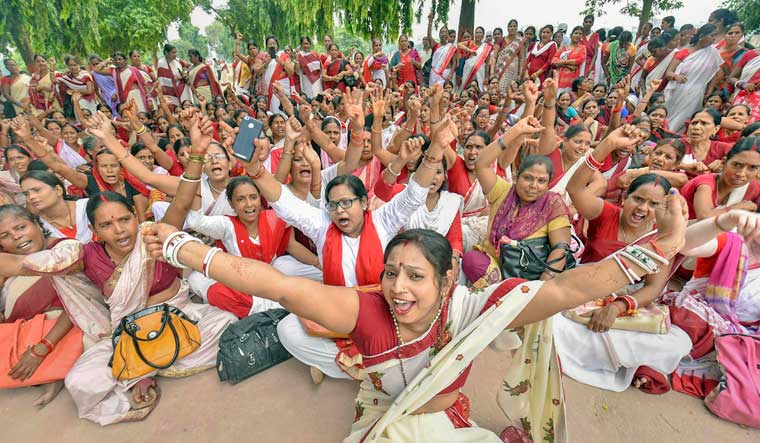 Mobile phones for anganwadi workers for real time data-entry are useful only when there are enough CDPOs – the block level officials to handle the data collected. Credit: PTI

The poor performance of the public sector especially in education, health and other social services has been the subject of a lot of debates in the last few decades. The dominant narrative has attributed implementation failures to corruption, lack of accountability, poor incentive mechanisms and over-sized government – aspects of inefficiency and rent-seeking assumed to be inherent in state systems. Solutions put forth therefore focus on circumventing the system, through technological interventions, or non-state participation that is aimed at either replacing the government system completely or partially through public-private partnerships. While it cannot be denied that the system is far from perfect, the suggested solutions do not address the core institutional shortcomings that exist. Hence, they might show some positive results in the short-term, but are neither sustainable nor scalable.

One of the glaring problems affecting the performance of the public sector is the acute shortfall in human resources throughout the implementation structure. This is reflected not just in the absence of numbers, but also in the inadequacies of training and qualification of the personnel involved. In fact, far from having an over-sized government, that has prompted calls for “minimum government”, India has one of the smallest governments in the world in relation to its population.  The US, for instance, not considered a proponent of large government, has 668 government employees per lakh population, compared to 139 in India.

The shortages in the crucial areas of education and health fall below internationally accepted norms as well. Hence, WHO data show nursing and midwifery personnel in India at 2.094 per 1000 population, compared with 5.229 in South Africa, 4.124 in Malaysia and 7.444 in Brazil. In fact, the shortfalls exist even when measured against the government’s own benchmark of staffing requirements. Rural health statistics for 2018, for instance, show vacancies to the tune of 37% for male health workers at sub-centres and 24% for doctors at primary health centres. In education, the situation is no better. The annual work plan and budget documents (2016-17) of the education ministry, show more than ten lakh [10,31,122] teachers’ posts vacant in government schools across the country. In Jharkhand, this amounted to 38.4% vacancies; in Bihar 34.4%; in UP 23.4%; and in Delhi 25%. And this is not accounting for the teacher requirement for the millions of children currently out of school [estimates range from six to 40 million]. What is worse is that 25% of teachers that are appointed do not possess the requisite qualifications [U-DISE 2017-18], reflecting another dimension of poor capacity, besides being a violation of the RTE Act.

While these figures reflect the lowest rung of government, the shortages extend to the block and district levels as well, adding to the burden of inefficient delivery. For instance, a recent study of five states (Rajasthan, Odisha, Himachal Pradesh, Karnataka and Delhi), conducted at the Centre for Policy Research, showed that 70% of the district education officers and 42% of block education officers had ‘dual charge’, i.e, they were in charge of more than one district or block. With each district catering to hundreds of schools, this is no mean task. Further, only 30% of the Block Resource Coordinators and 54% Cluster Resource Coordinators had received training for their jobs. For the ICDS programmes too, Child Development Protection Officers (CDPOs) – in charge of 100 or more anganwadi centres – have to double up for the 39% vacant positions in their ranks. Similarly, in health, the gaps extend beyond the frontline to specialists in hospitals, with a 67% shortfall in paediatricians and 68% in total specialists at community health centres.

Also read: The Modi Government is Losing the Plot on Public Sector Banks

Even as these shortfalls abound, the range of tasks expected by the lower bureaucracy has only grown, without commensurate training or assistance for the increased work load. For instance, in addition to the regular work of dispensing finances, appointments, transfers, and other provisioning, education officials are now expected to collect and collate larger amounts of data (hundreds of formats collated at the block level), follow up on ever-increasing legal cases and be available for a myriad other government duties. But there are no legal assistants or data enumerators (only data entry operators) in the system. It comes as no surprise then that a recently concluded study by NIEPA has found that teachers are able to devote only 19% of their time to teaching – the rest being consumed by non-teaching tasks imposed on them. Read along with the shortages in staffing it is no wonder that learning levels have declined in the manner they have.

Unfortunately, most of the ‘reforms’ that are being introduced to address poor delivery of social services are silent on the issue of inadequate human resources, among other shortfalls in capacity. It does not take much to see that without trained staff to oversee the technological revolution, digital classrooms cannot work, in addition to the fact that most rural schools have little or no digital penetration. After all, school tutorials provided through mobile apps can serve to provide additional support but do not address the basic shortcomings in the classroom, most importantly the absence of a teacher.

Similarly, mobile phones for anganwadi workers for real time data-entry are useful only when there are enough CDPOs – the block level officials to handle the data collected. But with 39% of sanctioned positions for CDPOs and 35% for sector supervisors lying vacant in 2017, it is hard to see technology itself do the job. Unfortunately, in a rush to find ‘solutions’ and at low costs, academic and policy circles are neglecting to open the ‘black-box’ of implementation to identify the fundamental problems – structural and systemic – that plague the system without which any solution is unlikely to have a lasting impact.

While capacity issues extend to other facets of the system as well, it is important to recognise that without sufficient human resources, especially at the lower ends of the delivery chain, no amount of tinkering with technology, performance pay, surveillance or private sector management, can achieve the results we seek and at the scale we do.

Kiran Bhatty is with the Centre for Policy Research, New Delhi, and Dipa Sinha teaches at Ambedkar University.