Police have suspended internet services in parts of the district after agitation against remarks by BJP leaders against Prophet Mohammed grew violent. 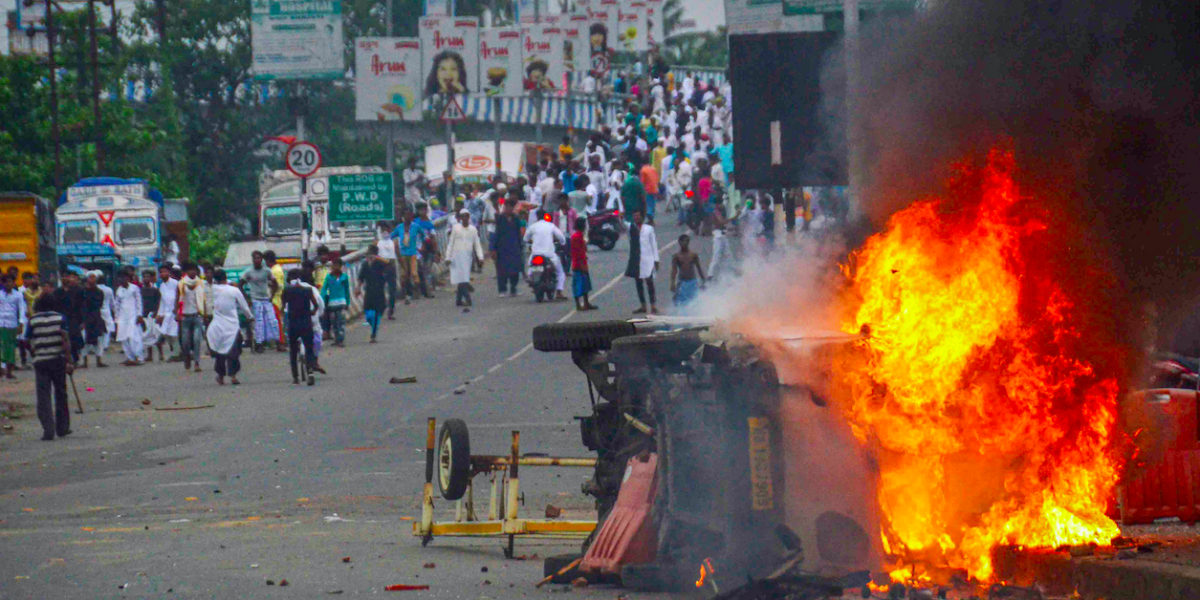 Flames and smoke rise from a vehicle on fire during a protest over remarks by BJP leaders against Prophet Mohammed, in Howrah, Friday, June 10, 2022. Photo: PTI

Kolkata: Amidst curfew and internet suspension orders in parts of Howrah in West Bengal – which has seen protests for two days now against remarks by BJP leaders against Prophet Mohammed – violence continued in pockets on June 11, Saturday, with several buildings in the Panchla area having been set on fire.

After protests escalated on Friday, police clamped Section 144 of the Criminal Procedure Code on the area and suspended internet services.

Curfew orders have covered stretches of National Highways and railway stations under the jurisdiction of Uluberia-Sub Division, covering Uluberia, Panchla and Jagatballavpur, of Howrah.

Assembly of five or more people in procession or carrying any dangerous weapon or any act that is likely to cause disturbance to public tranquility and breach of peace is prohibited in these areas till June 15. Internet suspension across the district will continue till June 13.

Local media has reported that a senior citizen passed away in the waiting Secunderabad-Shalimar Superfast Express near Deulti station while returning home from Hyderabad where he had gone to seek treatment while the railway lines were blocked by protesters for hours.

Police initially claimed that at present there is peace in the areas. However, reports say protesters have been violent and have continued to clash with police in pockets, including at Panchla Bazaar in Howrah. Several shops and buildings were set on fire there.

Sec 144 CrPC imposed in & around the stretches of National Highways & Railway Stations under the jurisdiction of Uluberia-Sub Division, Howrah extended till June 15 pic.twitter.com/tmBYROTz5M

Chief minister Mamata Banerjee, who had earlier asked protesters to maintain peace, said in a tweet on June 11 that she suspected a political hand in violence.

“I have said before, for two days Howrah has been at a standstill as hateful incidents are being caused. Behind this are some political parties and they want riots, but this will not be tolerated and strong steps will be taken against the. BJP is at fault and the people will suffer?” she wrote in Bengali.

“Bengal and Kashmir are the same now,” he told local reporters. “If the chief minister cannot, leave it to us, we will stop it in 30 minutes,” Majumdar added.