Central assistance up to Rs 2.5 lakh per house made by private builders will be provided to buyers, even if the construction is on private land. 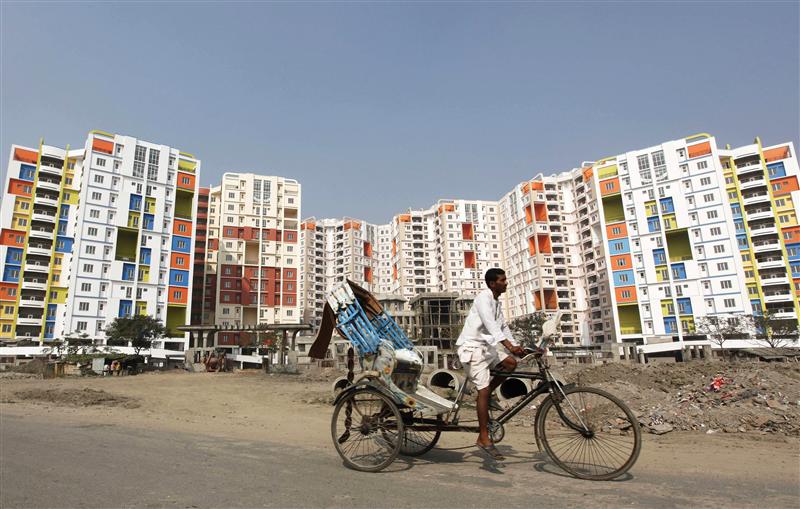 For representational purpose. A man rides his cycle rickshaw past newly-constructed residential buildings on the outskirts of Kolkata December 29, 2010. Credit: Reuters/Rupak De Chowdhuri

New Delhi: With the aim of attracting private players in the affordable housing sector to meet the ‘housing for all’ target by 2022, the government has unfolded a new public-private partnership (PPP) policy that allows extending central assistance up to Rs 2.5 lakh per house built by private builders, even on private land.

The policy also envisages opening up potential for private investments in affordable housing projects on government land in urban areas.

The two PPP models for private investment in affordable housing on private land include extending central assistance of about Rs 2.5 lakh for each house as an interest subsidy on bank loans as upfront payment under the credit-linked subsidy component of Pradhan Mantri Awas Yojana (Urban). Under the second option, central assistance of Rs 1.5 lakh will be given for each house to be built on private land, in case the beneficiaries do not intend to take bank loans.

Speaking at the real estate infrastructure investors’ meet in Mumbai, Puri expressed concern over the private sector not entering the affordable housing sector despite “scope” under the Pradhan Mantri Awas Yojana (Urban) and what he called an enabling ecosystem put in place through several concessions and incentives offered, including the grant of infrastructure status for this segment.

Puri maintained that eight PPP options, including six for promoting affordable housing with private investments using government land, have been evolved after extensive consultations with states, promoter bodies and other stakeholders.

Also read: This is Not the Right Way to Think About Housing for All

Last week, a time-bound review of floor space index and floor area ratio norms in 53 cities with a population of a million and above and state capitals was announced to enable better utilisation of scarce urban land parcels.

The minister said that a decision would soon be taken on allowing urban housing projects in peripheral villages and talks are on in this regard with the Ministry of Rural Development.

Online mechanisms for time-bound approvals for building plans and construction permits has already been introduced in Mumbai and Delhi, and the same will happen soon in 53 cities with a population of above one million each, he said.

Adding that a Model Tenancy Act and National Rental Housing Policy would be announced soon, Puri exhorted private developers to seize the investment opportunity in affordable housing in the prevailing enabling environment, saying, “It is time to stop debate and swing into action”.