To comply with the oath he has taken under the constitution, Modi must declare publicly that he is attending the event in his personal capacity. 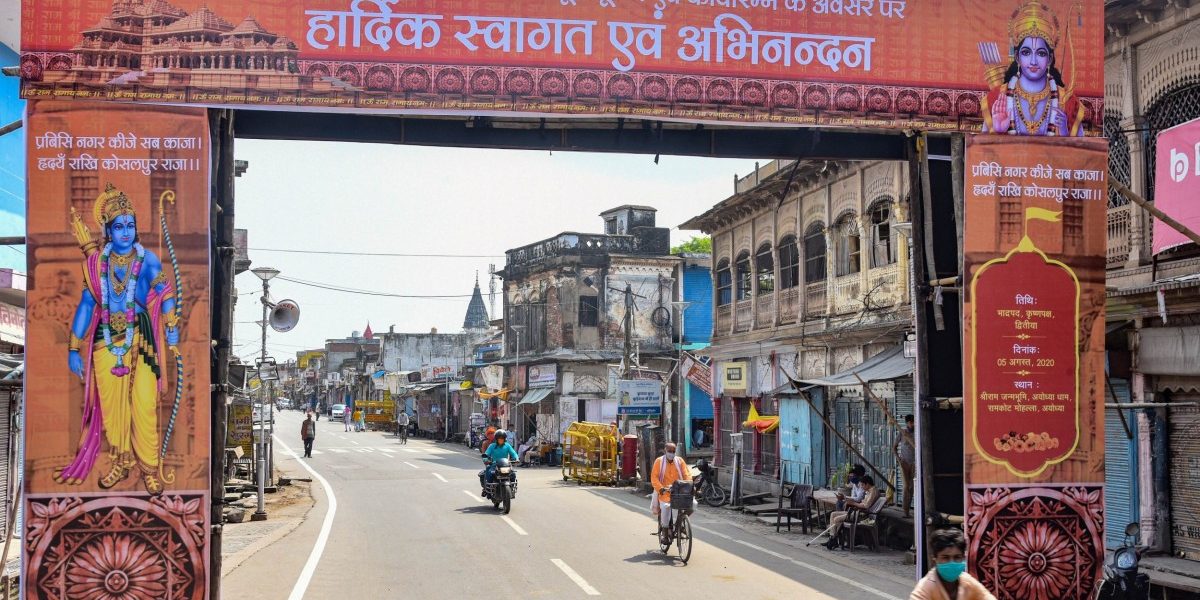 Preparations in Ayodhya ahead of the Ram temple bhoomi pujan on Wednesday. Photo: PTI

According to the formal invitation card that has been issued by the organisers, Narendra Modi, prime minister of India, is set to take part in the August 5 ‘bhoomi pujan’ marking the beginning of construction work for a Ram temple in Ayodhya, at the site where the Babri Masjid once stood.

The temple owes its existence to a historic yet unsigned written judgment by the Supreme Court last November, when it granted the entire 2.77 acres of disputed land in Ayodhya to the Hindu litigants. In the very same judgment, for balancing equities, the court directed the Central and Uttar Pradesh governments to allot an alternative five acres of land to the Muslim party to build a mosque.

However, under the  Indian constitutional principle of secularism, can a prime minister attend this religious function?

This takes us back to the first few years of the republic, when, on the eve of the inauguration of the newly built Somnath temple, India’s first prime minister, Jawaharlal Nehru, had certain disagreements with the first president, Rajendra Prasad, regarding Prasad’s acceptance of an invitation to inaugurate the Somnath temple.

In a letter to Prasad, Nehru wrote:

“I confess that I do not like the idea of your associating yourself with a spectacular opening of the Somnath Temple. This is not merely visiting a temple, which can certainly be done by you or anyone else but rather participating in a significant function which unfortunately has a number of implications.”

By the “number of implications”, Nehru presumably meant that the inauguration of a temple by the president would be a challenge to the secular fabric of the Indian republic. Prasad ignored Nehru’s advice and said, “I would do the same with a mosque or a church if I were invited.”

Eventually, Nehru wrote to all the chief ministers, saying that the function is not governmental and the Central government had nothing to do with it. He added that nothing should come in the way of the state being secular.

Had Prasad been visiting in his individual capacity, his presence that day would not have had any such implications. At that time, India was a newborn republic in a debilitated state, healing from communal riots. It was the inherent responsibility of the state to give a sense of security to all, especially minorities who had opted to stay in India. By no stretch of imagination could India’s leaders have afforded to give the impression that any one particular religion, Hinduism in this instance, was being favoured by the state, thus leading to a trust deficit with its non-Hindu citizens.

Rather than referring to future ceremonies in mosques or churches as a defence for attending the Somnath inauguration, Prasad could have simply avoided it, thereby setting a healthy precedent or convention in the spirit of secularism, to be emulated by his successors. Even after that incident, India has an unfortunate history of capitalising on religious differences for short-term political interests. For instance, Indira Gandhi inaugurated the Bharat Mata Mandir, constructed in 1983 with the support of the Vishwa Hindu Parishad.

Secularism, in the Indian context, doesn’t just encapsulate the idea of the state being secular. It’s a rainbow platform where various colours of our religions co-exist harmoniously. We are allowed to be what we are or what we want. That also gives every citizen (including the prime minister) the right to practice her or his own religion and have their own personal faith. But while there is nothing wrong with Modi the citizen attending the foundation stone-laying ceremony for the Ram Mandir, the same act may not be completely right for a prime minister.

As noted, the invitation cards refer to Modi’s official designation, and unless he makes an unequivocal declaration that he is attending the event in his individual capacity, his visit will be treated as an official one. Secondly, there is no clarity about the costs or expenses associated with his participation in the event. 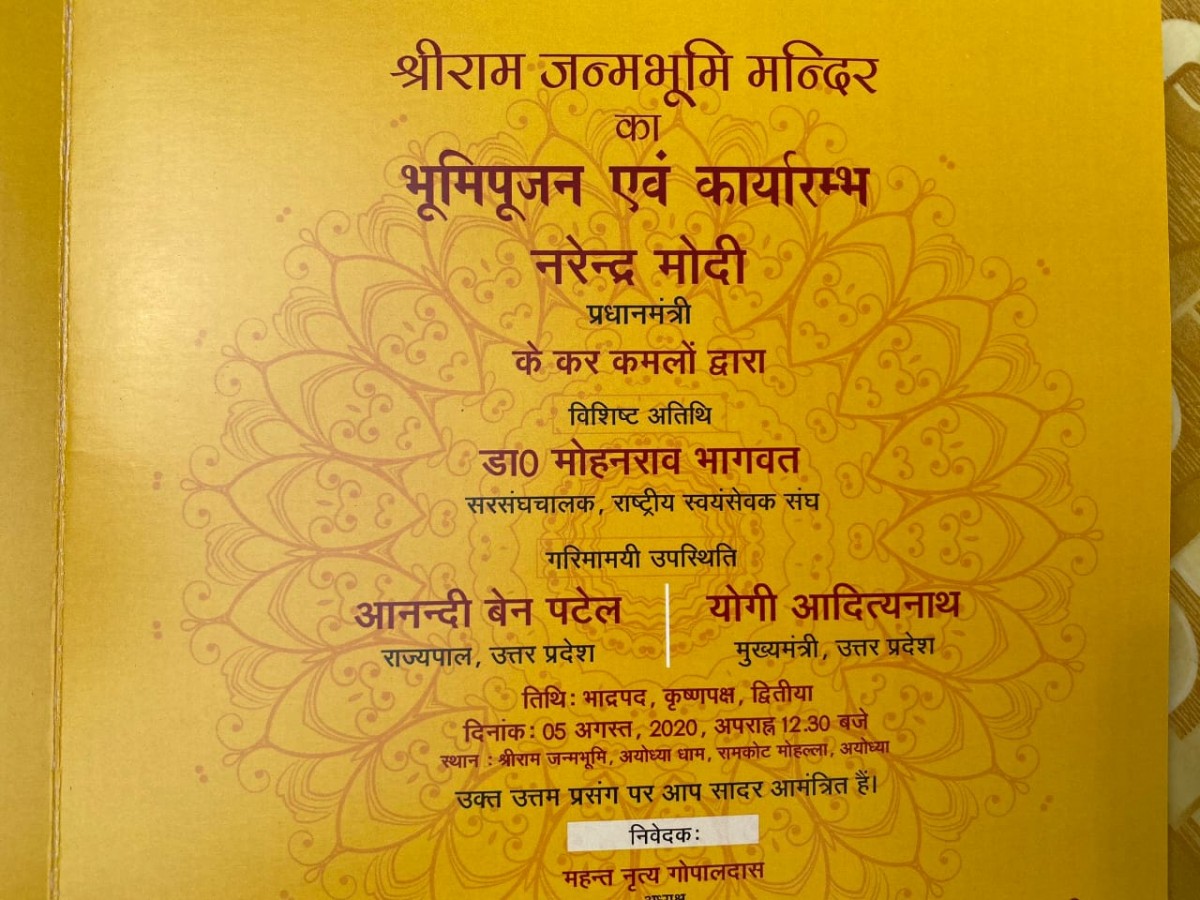 The invitation sent out for the August 5 bhoomi pujan in Ayodhya. Photo: Special arrangement

The prime minister, who is primus inter pares in India’s system, in a way represents the collective conscience of the country. He may be a Hindu, he may have campaigned for Hindu votes, but after being voted to power he must represent citizens of all faiths equally. He is in the North, but with the responsibility to work for the South as well. He hails from Western India, but has a duty to take care of people in Eastern India. He has to meet the high standards of secular credentials attached with the office of the prime minister.

As Justice P.B. Gajendragadkar wrote in 1963:

“It is true that the decision regarding the question as to whether a certain practice is a religious practice or not, as well as the question as to whether an affair in question is an affair in matters of religion or not, may present difficulties because sometimes practices, religious and secular, are inextricably mixed up. This is more particularly so in regard to Hindu religion because as is well known, under the provisions of ancient Smritis, all human actions from birth to death and most of the individual actions from day to day are regarded as religious in character. … Though the task of disengaging the secular from the religious may not be easy, it must nevertheless be attempted.“

“Our Constitution-makers certainly intended to set up a Secular Democratic Republic the binding spirit of which is summed up by the objectives set forth in the preamble to the Constitution. No democratic political and social order, in which the conditions of freedom and their progressive expansion for all make some regulation of all activities imperative, could endure without an agreement on the basic essentials which could unite and hold citizens together despite all the differences of religion, race, caste, community, culture, creed and language. Our political history made it particularly necessary that these differences, which can generate powerful emotions, depriving people of their powers of rational thought and action, should not be permitted to be exploited lest the imperative conditions for the preservation of democratic freedoms are disturbed.”

The temple to Ram which Modi will inaugurate  in Ayodhya went through a chequered history. Unlike the reconstruction of Somnath, this history includes the demolition of a mosque, about which the court said in the Ayodhya title dispute case:

“…the Muslims were dispossessed upon the desecration of the mosque on 22/23 December 1949 which was ultimately destroyed on 6 December 1992. There was no abandonment of the mosque by the Muslims. This Court in the exercise of its powers Under Article 142 of the Constitution must ensure that a wrong committed must be remedied. Justice would not prevail if the Court were to overlook the entitlement of the Muslims who have been deprived of the structure of the mosque through means which should not have been employed in a secular nation committed to the Rule of law. The Constitution postulates the equality of all faiths. Tolerance and mutual co-existence nourish the secular commitment of our nation and its people.”

The Supreme Court judgment has merely decided the title of the property. Nowhere is this a judgment on what it, or Hindus at large, believe about Lord Ram and his birthplace, as the TV channels are asserting.

The prime minister is duty bound, constitutionally, to maintain the trust of all communities. In his personal capacity, this may be an event that marks the fulfilment of election promises made by the BJP (building the Ram Mandir), but in his official capacity, the message that is being conveyed by him attending the event is not in consonance with his oath under the constitution. In that oath, he affirmed to bear true faith and allegiance to the Constitution of India as by law established and to uphold the sovereignty and integrity of India. In the words of Justice Nariman in Kantaru Rajeevaru vs Indian Young Lawyers Association (the Sabarimala case review):

“It is important to notice, at this juncture, that so far as the Prime Minister and members of his Cabinet are concerned, not only does the form of oath contained in the Third Schedule require that all such persons will bear true faith and allegiance to the Constitution of India as by law established, but also that they will do right to all manner of people, in accordance with the Constitution and the law, without fear or favour, affection or ill will.”

Attending the bhoomi poojan in his official capacity will not set a healthy precedent and will undermine the cherished principle of secularism, which is part of the basic structure of India’s constitution. In the case of state-religion dichotomy, secularism is like judicial review, which ensures that all actions of the state are in conformity with the fundamental values enshrined in the constitution. Secularism merely demands that the prime minister attend this event in his individual capacity, and not as a constitutional functionary.

Though the majority of India’s citizens are Hindu, the ideals of secularism have allowed other religions to grow equally. In S.R. Bommai vs Union of India, wherein secularism was recognised as part of the basic structure of the constitution, Justice Jeevan Reddy held that the constitution does not recognise or permit mixing religion and state power, and the two must be kept apart. The court said:

“…….If the Constitution requires the State to be secular in thought and action, the same requirement attaches to political parties as well. The Constitution does not recognise, it does not permit, mixing religion and State power. Both must be kept apart. That is the constitutional injunction. None can say otherwise so long as this Constitution governs this country. Introducing religion into politics is to introduce an impermissible element into body politic and an imbalance in our constitutional system. If a political party espousing a particular religion comes to power, that religion tends to become, in practice, the official religion. All other religions come to acquire a secondary status, at any rate, a less favourable position. This would be plainly antithetical to Articles 14 to 16, 25 and the entire constitutional scheme adumbrated hereinabove. Under our Constitution, no party or Organisation can simultaneously be a political and a religious party.”

Saving himself from violating his oath under the constitution does not make Narendra Modi less of a Hindu; rather, it will set an example of true statesmanship, inspiring confidence, trust and a sense of belonging among all communities. In these times of distrust, this will be an unprecedented example that the prime minister can and must set for the greater good of the country.

Saaket Jain is an advocate practising at the Supreme Court of India.