The modern Indian state has kept on brutal colonial laws and has even hardened them to exercise control over its citizens.

Police officers advise women to maintain distance as they wait to collect grocery during an extended nationwide lockdown to slow the spreading of coronavirus disease (COVID-19), in Ahmedabad, April 16, 2020. Photo: Reuters/Amit Dave/File Photo

Beginning with this article, the author shall present a series of articles which will examine how various Indian laws and the criminal justice system lends itself ‘inherently’ to abuse by the police and those in power, and why the Indian state has not done anything in all these 74 years to address the issue.

A Kanpur businessman, Manish Gupta, was murdered by the police in Gorakhpur, Uttar Pradesh recently. The information available so far reveals that the police had barged into their hotel room, apparently in the name of some mysterious ‘checking’. Following an argument, the cops hit the deceased on the back of his head that led to his eventual death. The post mortem report seems to confirm severe beating. The heart-wrenching video of his disconsolate wife Meenkashi Gupta crying and demanding justice is so deeply disturbing that it must rattle the conscience of any normal person.

In political circles, it has been alleged that an extortion racket was linked to the matter. Despite the fact that extortions in the name of ‘checking’ for terrorists, criminals or prostitution have been common practice across the country since long, I will refrain from commenting on this part of the allegation because sufficient information is not yet available.

Sheer illegality of the act of police entering the hotel

The police do not have any powers to violate the privacy of citizens and carry out such raids on hotels etc. under the pretext that they had secret ‘intelligence’ about the presence of some mysterious terrorists or criminals on the premises. This argument is patently invalid because, carried to its logical end, it would mean that the police can concoct an intelligence report and barge into anybody’s home, office or hotel.

The Supreme Court in its judgment in the case of Kharak Singh (1962) had categorically ruled that the so-called ‘domiciliary visits’ by the police to the houses of even criminals in the name of ‘surveillance’ are violative of Article 19 of the Constitution. The court struck down the concerned regulation of the UP police that had provided for domiciliary visits. Then in Mohammed Shafi (1993), it was held that, in the name of surveillance, there should not be any physical appearance of cops causing any annoyance or invasion of the privacy of a citizen or entering the house of the subject. Even if there is secret picketing, it should not be used to offer any resistance to visitors – it should be used only to keep a watch and maintain a record of the visitors if it may be necessary.

Needless to say, the police raid on the hotel on ‘manufactured intelligence’ was absolutely illegal and if it was authorised by senior officers, they must be hauled for violation of Supreme Court orders.

Although following public uproar and keeping the proximity of the elections in mind, a murder case was subsequently registered against six cops, initially the police had sought to defend their heinous crime and the district SP is on record on video having said that the deceased had fallen in confusion or flurry, thereby sustaining the injury. This means that, given their way, the police would have justified even murder by such a ridiculous and puerile excuse.

Police abuse of the laws stems from two reasons. The first is obviously a desire of the policemen to wield undue power over powerless people and thus satisfy a sadistic urge. The psychological reasons of police highhanded behaviour have been discussed earlier.

Those who suffer from numerous personality disorders and complexes will indulge in such behaviour irrespective of the country or legal system they happen to be. That is how, even in the USA, we had incidents like the brutal murder of an African-American George Floyd by a white police officer.

The second reason is more fundamental. In the Indian context, police are able to indulge in a rampant abuse of the laws and the legal powers vested in them because, historically, the laws are so designed that, by virtue of an ‘intrinsic greyness’ in them they lend themselves to be abused easily.

Safeguards against abuse are not provided in the system because the colonial power that framed the laws, did not want any safeguards so that the powers of its agents remained untrammelled. For them, even a ‘daroga’ (sub-inspector) embodied the power of the Empire and an assault on him, physical or legal, amounted to an assault on the Empire itself, which was resisted with might and main.

After independence, irrespective of the political party in power, the Indian state continues to be absolutist and, far from giving up any of the colonial powers, is single-mindedly enacting more and more draconian laws that enhance its powers. 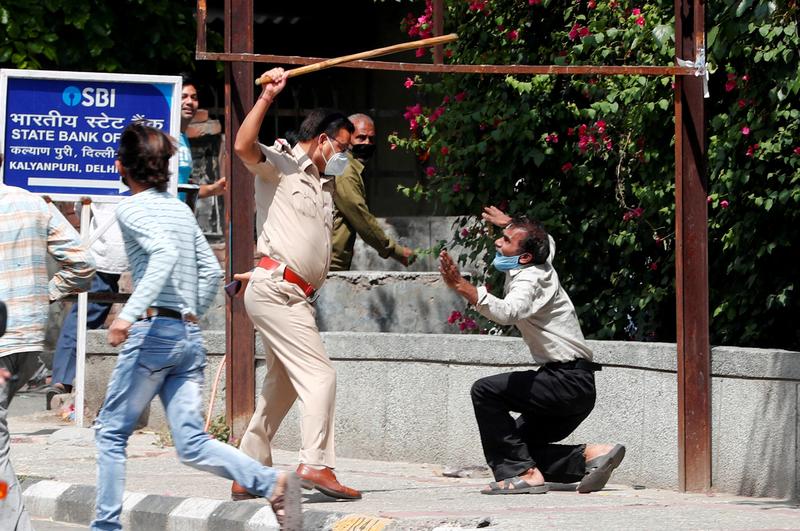 A police officer raises a baton at a man who, according to police, had broken the social distancing rule, outside a wine shop during an extended nationwide lockdown to slow the spread of the coronavirus disease (COVID-19), in New Delhi, India, May 4, 2020. Photo: Reuters/Adnan Abidi

Our laws and the legal system trace their origin to 1861 when, in the wake of the Sepoy Mutiny of 1857 (aka the First War of Independence), the British hurriedly imposed a criminal justice system upon us. The British were too keen to show to the world that, unlike like Portugal or Spain, they were not as brutal and exploitative colonial powers. The trick lay in appearing benevolent rulers who wanted to ‘enlighten’ the ‘primitive’ subjects and yet rule with an iron fist on the sly – the famous ‘white man’s burden’ disguised behind a veneer of British liberalism and European Rationalism and the Enlightenment embraced by Jeremy Bentham and John Stuart Mill et al.

Thus, the overriding concern of British imperialism in India was to exercise absolute control over the defeated race and yet make it cleverly appear that they were obliged to do it because they were ‘civilising’ them through laws and a legal system and it was vital to uphold the law at all costs – never mind, they themselves had created those ‘alien’ laws and the legal system.

Also read: The Policeman and His Toolkit Are Essential Props for a Government at Odds With the People

A usual plea of the state in its defence is that, the state, being an abstract body, can do no wrong and its actions cannot be imbued with any ulterior motive. By an extension of the argument, it tries its best to ensure that the officers of the State too, acting on behalf of the State, are not imbued with any ulterior motive in their acts of commission or omission that turned out to be wrong.  It is only in worst-case scenarios when it is cornered, it throws blame on individuals as a damage control measure, as has been done in the Gorakhpur case.

The state has been doing this since long even as in a catena of judgments including Circulate The Judgment Amongst… (2017), Vidhyawati (1962) and Nagendra Rao (1994), it has been held that the plea of sovereignty immunity, based on old feudalistic notions of justice namely the ‘King can do no wrong’, does not exist in the realm of  the welfare state and the state, like any ordinary citizen, is liable for  the acts done by its employees.

Moreover, there is another flaw in the argument of deflecting blame on the minions alone. Even if the state argues that some individual cops or other officials are to be blamed, it still cannot absolve itself of responsibility because it had selected, trained and nurtured those very cops. If cops regularly turn out to be villains, it would mean that there is something fundamentally wrong with their process of selection, training and continuation in job, all with the blessings of the state.

In the context of harassment of the citizens through malicious prosecution or implicating in false cases, the International Covenant on Civil and Political Rights 1966 (ICCPR), being one of the key international documents on miscarriage of justice, provides, vide Article 14(6), that if the conviction of a person is reversed, the person who has suffered punishment as a result of such conviction must be compensated according to law. Article 9(5) provides for compensation for unlawful arrest or detention also. However, it was for political parties to enact legislation towards this end. Most of the major democracies like the UK, USA, Germany and Canada have already done it.

Although India had ratified the ICCPR in 1979 itself, and we have judgments like Rudul Sah (1983) etc., the Indian state has not enacted any legislation. The position in 42 years has not changed in spite of governments of different political ideologies having been in power. This means that when it comes to the question of power of the State, all parties have been equally villainous.

The simple reason is that the Indian state does not want to do it and that because, historically, the state in India has enjoyed absolute powers. The absolutist state will incur a loss of face, if it were obliged to compensate people for the wrongs committed upon them by the state and its agencies or officials.

Similarly, in the context of torture, India has merely signed the Convention against Torture and other Cruel, Inhuman and Degrading Treatment or Punishment in 1997. To ratify the Convention, it is necessary to enact an enabling legislation to reflect the definition and punishment for ‘torture’, and bring domestic laws in conformity with the Convention. That is precisely what is not being done.

So far, there are no indications that the government of India has any intention to ratify the United Nations Convention against Torture (UNCAT) or enact a national law against torture despite the Law Commission of India having submitted the draft Prevention of Torture Bill, 2017 in October 2017 for enactment by the parliament. This was done after a Bill introduced in 2010 had lapsed with the 15th Lok Sabha. Interestingly, in not doing so, India is in the distinguished company of eight other great countries including Sudan, Brunei, Bahamas, Sao Tome and Principe, Angola, Comoros, Gambia and Palau. This list itself speaks volumes about India’s commitment to human rights.

Even if the Bill is passed in its present form just to satisfy international opinion, it will be an apology of a law as it leaves numerous loopholes.

Ulterior motives of the state

Arfa Khanum Sherwani points out that, in abusing their powers, the police and the state have forgotten that they are ultimately answerable to the Constitution and the people, not the state. The Indian state does not really want its agencies or its officials to be stripped of their draconian powers and ‘legal protection’ because the overbearing state in India misuses the police and other agencies for its vested interests. Any attempt at ‘weakening’ the police and other enforcement agencies is perceived as equal to ‘weakening’ the state itself; hence the fierce resistance of the state in letting go any of its powers.

The British had hung on to their draconian powers more for maintaining the ‘awe-inspiring aura’ of the Empire; the modern Indian democratic state hangs on to the same powers for no reason other than keeping the citizens under its thumb.

It is also evident from the fact that a much larger number of cases per lakh population are taken under sedition, 153A and 295A IPC (promoting enmity on account of religion, etc.), etc. after independence than in the colonial era.

Dr. N. C. Asthana is a retired IPS officer and a former DGP, Kerala. Author of 49 books, his latest book is State Persecution of Minorities and Underprivileged in India. He tweets @NcAsthana.