The PMO also refused information regarding the implementation of the national lockdown and how this decision was reached. 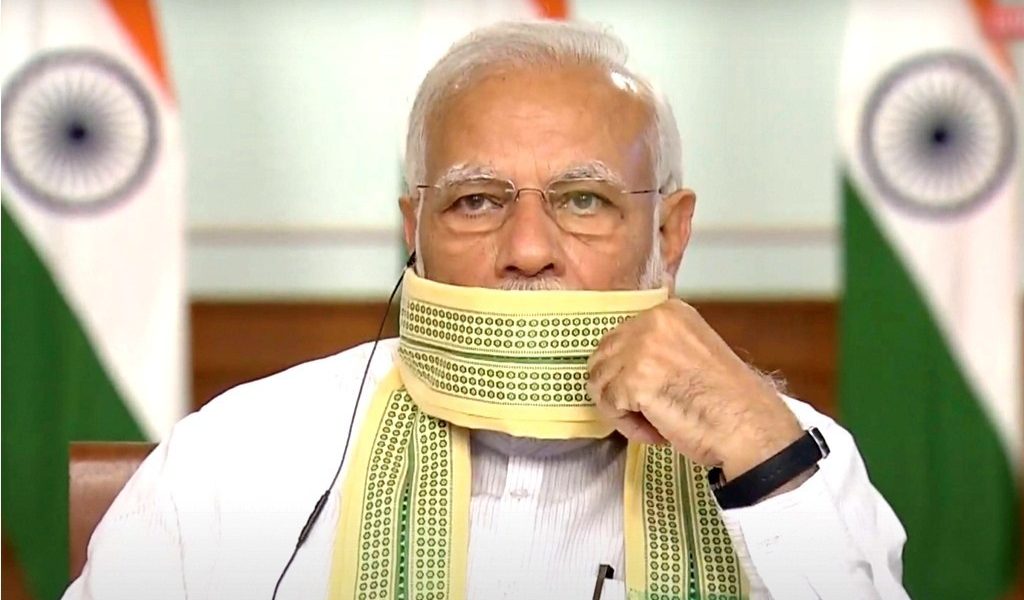 New Delhi: The Prime Minister’s Office (PMO) has refused to make documents related to the PM-CARES Fund public. The fund was set up to receive financial aid from the public to fight the coronavirus pandemic.

In addition, the PMO has also refused to make public details of high-level meetings on COVID-19 and on the decision to implement a lockdown, the correspondence between the Ministry of Health and the PMO in this regard, and files related to COVID-19 testing.

It is significant to note that the PMO has not refused to share information in a straightforward manner but among many reasons, cited a controversial statement made by a bench of the Supreme Court.

A resident of Greater Noida and environmental activist, Vikrant Togad, had filed an application under the Right to Information (RTI) Act on April 21, 2020 seeking information on 12 points from the PMO.

However, the PMO hurriedly sent a reply merely six days later, on April 27, refusing to furnish information citing that the application contains multiple requests on numerous and varied topics, as a result of which the information could not be provided.

The PMO wrote, “It is not open to the applicant under the RTI Act to bundle a series of requests into one application unless these requests are treated separately and paid for accordingly.”

The PMO’s response does not seem to comply either with the law or decisions of the Central Information Commission (CIC).

The Central Public Information Officer (CPIO) of the PMO, Parveen Kumar, has resorted to an order of the CIC and a statement of a Supreme Court bench in his response. However, it seems that Kumar has misinterpreted both the order and statement, because neither of them prevents officers from providing information.

First argument: A directive from the CIC

While refusing to provide information, the PMO has resorted to a 2009 order of the CIC in which the Commission had given its verdict regarding an RTI application which sought information on multiple topics. In 2007, Rajendra Singh, a resident of Delhi, had filed an RTI at the CBI headquarters seeking information on a total of 69 points.

The CPIO of the CBI sent these questions to the concerned departments to respond. One of the CPIOs sent a reply to Singh stating that he could receive information by depositing Rs 10 per question as the information sought by him was related to varied subjects.

Dissatisfied with the response, Singh did not submit the additional fees and instead filed a first appeal. However, the first appellate officer upheld the CPIO’s reply.

The matter then reached the first and then chief information commissioner, Wajahat Habibullah, where the appellant demanded that the information sought by him be provided and the CPIO be punished for demanding additional fees.

After hearing arguments from both the sides, the Commission reached the conclusion that out of the questions asked, only one question was related to a different subject. Therefore, the appellant should deposit Rs 10 separately for it, after which the CPIO would provide the information sought by the applicant.

It is noteworthy that contrary to the PMO’s argument, the Commission did not restrain concerned departments from furnishing information but to provide it after payment of additional Rs 10 for each different subject.

In his verdict, Habibullah observed, “The issue hinges around the application required to be made for obtaining information u/s 7 (1). Under this clause a CPIO, on receipt of ‘a request’ is expected to deal with it expeditiously when accompanied with a fee. It is, therefore, not open to the applicant under the RTI Act to bundle a series of requests into one application unless these requests are treated separately and paid for accordingly.”

However, the verdict further added, “We concede that a request may be comprised of a question with several clarificatory or supporting questions stemming from the information sought. Such an application will indeed be treated as a single request and charged for accordingly.” 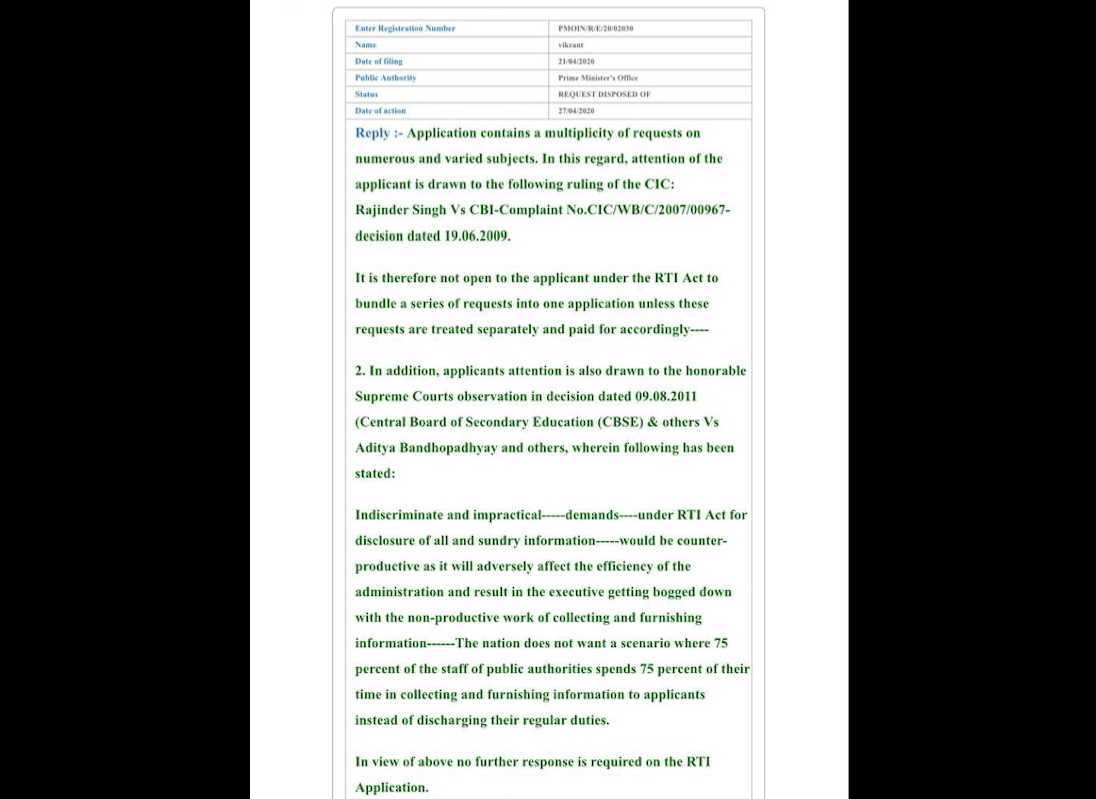 However, in 2011, then chief information commissional Shailesh Gandhi observed that no ‘legal basis’ has been given in the verdicts which restricted the scope of the RTI application to only one subject or sought additional fees on multiple subjects.

Overturning earlier rulings, Gandhi stated that ‘a ‘single subject matter’ has neither been defined in the RTI Act, nor the rules and regulations framed thereunder. Therefore, the fundamental right to information of citizens cannot be curtailed nor unnecessary money be sought from them.

In the matter of DK Bhaumik vs SIDBI and Amit Pande vs SIDBI, Gandhi further elaborated on whether a separate application fees of Rs 10 is required to be furnished in relation to each topic or head, or if there is a legal requirement on an applicant’s part to restrict the scope of an RTI application to only one subject matter.

Referring to a 2001 Supreme Court ruling in Gurudevdatta VKSSS Maryadit & Ors vs State of Maharashtra & Ors, Gandhi said, “The Commission respectfully differs from former Chief Information Commissioners regarding the definition of the term ‘a request’ mentioned under Sections 6(1) and 7(1) of the RTI Act. It is important to mention that no legal basis has been given by the then Chief Information Commissioners for interpreting the term.”

“If the golden rule of statutory interpretation, as laid down by the Supreme Court of India, is to be applied, then the term ‘a request’ must be given its natural and ordinary meaning, which certainly does not appear to mean ‘one category of information’. Even from a plain reading of Sections 6(1) and 7(1) of the RTI Act, there does not appear to be any embargo on the scope of such request or application,” added Gandhi.

“What constitutes ‘a single subject matter’ has neither been defined in the RTI Act, the rules and regulations framed thereunder and not even by the then Chief Information Commissioners in the said decisions. No parameters have been laid down by the then Chief Information Commissioners by which an applicant and the PIO can determine whether the information sought pertains to one subject matter,” the former CIC said.

“The exercise of such discretion by the PIO is likely to be subjective resulting in arbitrary curtailment of the fundamental right to information of citizens and unnecessary expenditure of money. In the absence of any clear definition of what ‘one category of request’ means it would only lead to arbitrary refusals of information under the RTI Act, leading to clogging of the appellate mechanisms,” he said.

Similarly, none of the various decisions of the CIC mentioned above refuse the provision of information on multiple subjects in a single RTI application. However, the PMO refused to furnish information regarding the PM-CARES Fund citing one of these orders.

Venkatesh Nayak, head of the Access to Information Programme of the Commonwealth Human Rights Initiative, says the PMO should have provided whatever information it had, and transferred the remaining part to the concerned department. “If the information is in various documents, then it should have allowed examination of files,” he says.

In the second argument, the PMO wrote in its response,

“The applicants attention is also drawn to the honourable Supreme Court’s observation in decision dated 09.08.2011 (CBSE & others Vs Aditya Bandopadhyay and others), wherein following has been stated:

Indiscriminate and impractical demands under RTI Act for disclosure of all and sundry information would be counter-productive as it will adversely affect the efficiency of the administration and result in the executive getting bogged down with the non-productive work of collecting and furnishing information.”

“The nation does not want a scenario where 75 percent of the staff of public authorities spends 75 percent of their time in collecting and furnishing information to applicants instead of discharging their regular duties,” it further added.

Although this statement of the apex court was considered anti-RTI and an excuse for PIOs unwilling to provide information, the court still directed the CBSE to allow inspection of answer-sheets and certified copies thereof to the examinees under the RTI Act.

Later, on the basis of this judgement, the Supreme Court directed the CBSE in 2016 to grant copies of answer sheets to students under the RTI Act at not more than Rs 2 per page.

It is generally observed that government departments resort to this ruling of the apex court for refusing to furnish information, while there is no basis for a rejection. The RTI activists and former information commissioners have criticised this.

Gandhi says that this statement of the Supreme Court has a negative impact on the RTI Act. “The statement was made without any legal basis. It was not needed at all. It does not suit the Supreme Court to make such statements regarding the fundamental rights of citizens,” he claimed.

In the analysis of 17 verdicts of the Supreme Court on the RTI Act by Gandhi and lawyer Sandeep Jain, this statement has been completely rejected. The assessment claims that only 3.2% of the staff need to work for 3.2% of the time while responding to RTI applications.

Despite this, however, public information officers of government departments keep denying public access to information while citing such reasons.