Documents Reveal That As Far Back as 2015, PMO Said Aadhaar Should Be Linked to NPR

At a time when a controversy over linking Aadhaar with NPR is raging, the minutes of the 2015 meeting led by the PMO shed considerable light on the official eagerness to make the collection of Aadhaar details mandatory.

New Delhi: That Aadhaar numbers should be mandatorily collected during the updating process for the National Population Register (NPR) was not merely recommended by the Union home ministry but has also been a longstanding direction of the Prime Minister’s Office (PMO). As far back as 2015, the PMO had said that the NPR should surely be linked with Aadhaar, official documents, a copy of which is with The Wire, reveal.

At an April 16, 2015 meeting presided over by the prime minister’s principal secretary at the time, Nripendra Mishra, discussions regarding Aadhaar, seeding and updating those numbers with the NPR took place.

The meeting was also attended by the director-general of the Unique Identification Authority of India (UIDAI), which authorises Aadhaar, mission director of direct benefit transfer (DBT), then Registrar-General of India (RGI) C. Chandramouli, additional principal secretary to the prime minister P.K. Mishra and many other high-level officials.

The minutes of the meeting, accessed by The Wire, note that the following decision was taken after the discussion: “For the Non-NPR States, seeding of NPR with Aadhaar must be started by July, 2015. For this purpose, a proposal may be prepared jointly by the Mission Director, DBT, RGI, DG-UIDAI.”

The minutes also show that the PMO’s preferences were given significant attention when the decision to update the NPR in April 2020 was taken. The Ministry of Home Affairs (MHA) was made a part of this file on the basis of which the decision to link Aadhaar with NPR was taken. The file has been marked as “very urgent”.

The documents show that the UIDAI and RGI were told to step up the process and complete their enrolments by the end of June 2015. Pointing out a few states like Uttar Pradesh and Bihar, where the progress was very slow, the UIDAI and RGI were told that the prime minister may also write a letter to the chief ministers requesting them to accelerate and complete the process within the prescribed period.

“From July, 2015, States/UTs may adopt the ‘challenge mode’ to cover the residual cases,” the minutes read. In the same meeting, the RGI was told to prepare a roadmap for Assam’s National Register of Citizens (NRC). The PMO also instructed the DG (UIDAI) and RGI to prepare a note to enumerate the achievements of the UIDAI and NPR, and asked them to send it to the secretary, information and broadcasting and joint secretary, PMO.

At a time when a controversy over linking Aadhaar with NPR is raging, the minutes of the 2015 meeting led by the PMO shed considerable light on the official eagerness to make the collection of Aadhaar details mandatory. In the face of mounting public criticism of this plan, the MHA recently said that the government would not force people without Aadhaar to submit their Aadhaar credentials to official enumerators. However, this, in reality, also means that almost everyone will have to submit their Aadhaar numbers to the NPR enumerators as the UIDAI has already issued Aadhaar cards to almost 124 crore Indians – almost equal to India’s total population. 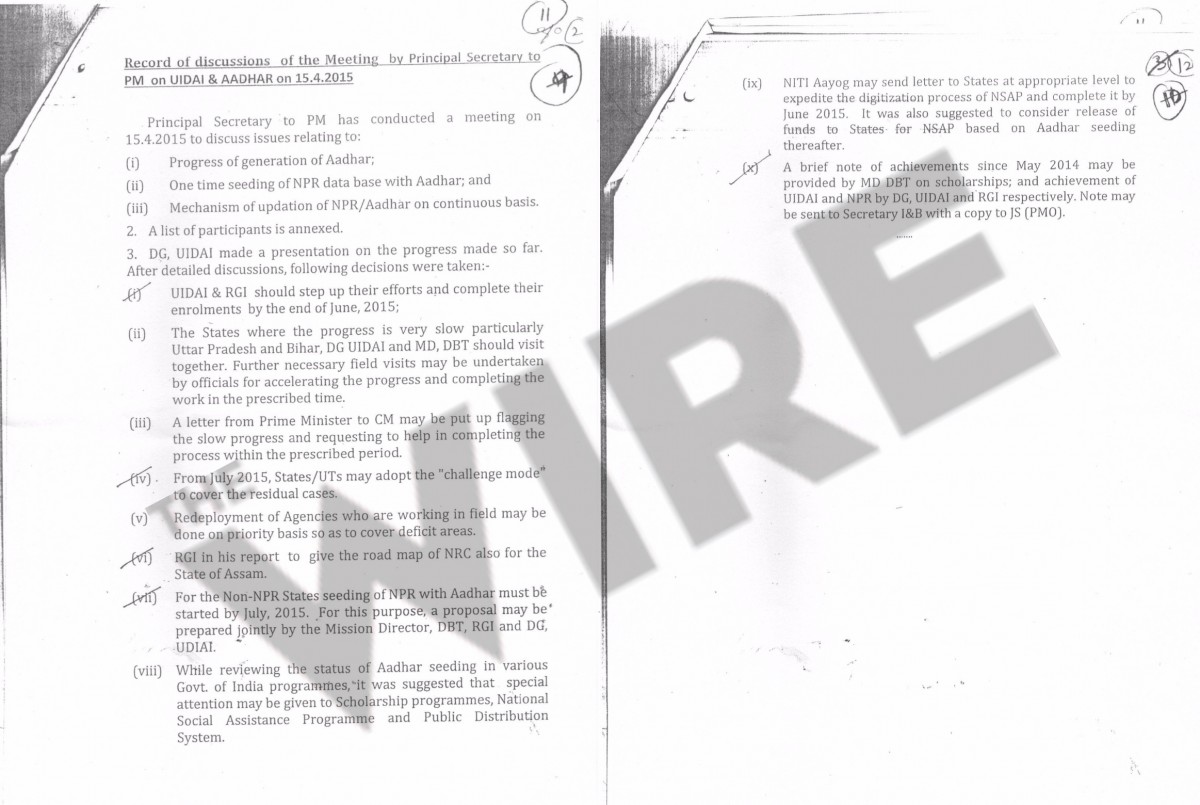 The Wire had earlier reported that the MHA in October 2019 had sought mandatory collection of Aadhaar details during NPR. In fact, the home ministry had been so insistent on it that it was even prepared to amend the Citizenship Act if needed in order to be able to legally ensure compliance from residents.

That is why concerns over Aadhaar collection during the NPR remain despite the MHA’s assurances. The Wire had also reported that even before NPR 2020 started, around 60 crore Aadhaar numbers – almost half of the total issued by UIDAI – had already been seeded with the NPR database. These numbers were seeded with the NPR database after the 2015 meeting that the PMO’s top officials led.

It is important to note that the office of the RGI (ORGI) in December, 2017, had rejected the request of some states to share the NPR data. The ORGI cited “privacy concerns” to reject the request of states, despite the fact that the Centre has access to the NPR data. States had asked for the data to improve the delivery of their welfare schemes, because, unlike Aadhaar, NPR has enumerated most information about families and businesses.

Chidambaram, however, has since said that the NPR exercise under the UPA was quite different from the one the Modi government is pursuing. He has alleged that the NPR under UPA regime had no links with NRC, and that with attempts to also question respondents about their parents’ place of birth etc in the current avatar of NPR indicates that it may be the first step towards the controversial NRC.