The More Piyush Goyal Shakes up the Railway Ministry, the More Things Stay the Same

It appears that one set of senior railway officials had Suresh Prabhu’s ear and another now has Goyal’s ear. Has the existing bureaucracy merely gained an upper hand again or has the bureaucratic animal been transformed? 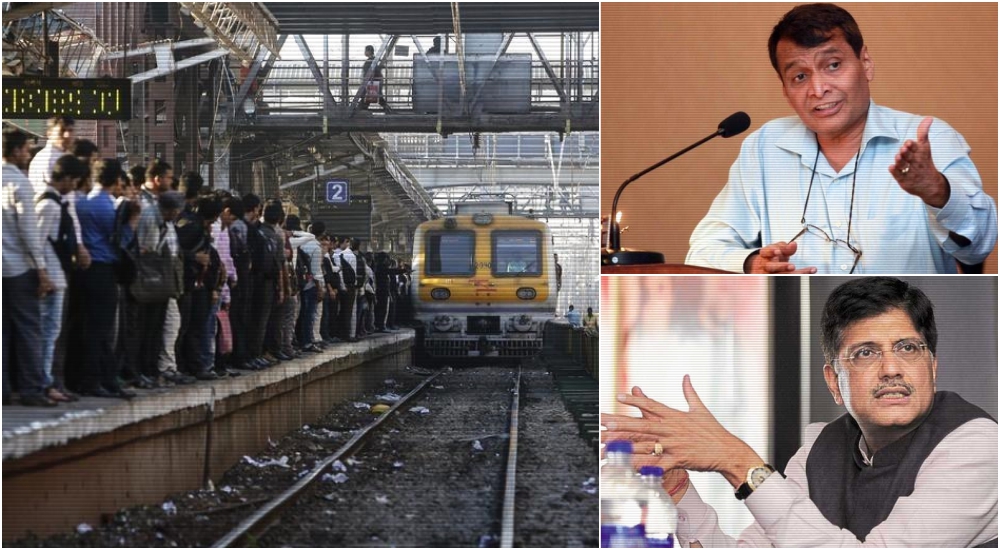 Piyush Goyal and Suresh Prabhu had the same goals. However, with Goyal’s recent and sweeping administrative changes, has he tamed the bureaucracy or merely given into it? Credit: Reuters

How is Piyush Goyal settling down as the head of the troubled, crisis-ridden Indian Railways?

Immediately after taking over, in his public utterances, he made all the right noises by focusing on eliminating unmanned level crossings, speeding up track renewal, using technology for track maintenance, getting railwaymen off duties at officers’ homes and back into operations and putting an end to the tipping of catering staff on board.

This is a good mixture of promising action where it is actually needed and playing to the gallery. And now, it’s time for the harder stuff of actual action. Goyal has taken three decisions which have overturned important ones of his predecessor Suresh Prabhu. Prabhu, now at the commerce ministry, had sought to put the railways back on its feet again.

One, Goyal has scrapped and rejigged the Rs 1 lakh crore station redevelopment plan of his predecessor. This is because the response to the bidding process for 23 stations has been lukewarm. Also going out of the window is the Swiss challenge system of bidding which Prabhu had opted for. Under such a system, a project authority asks for a bid and publishes it so that other bidders can better it.

Redevelopment of key stations is a high profile project aimed at adding zing to rail travel for the same people who would want to use bullet or high-speed trains. A key additional benefit for the railways will be income from real estate development at the stations but that can be bound by market cycles. If the commercial space market is down then that puts a damper on a project like this.

Secondly, and this is more serious, Goyal has decided to do away with a Rs 5,000 crore plan to give the railways a new information technology infrastructure by creating a separate directorate termed One ICT (information, communication and technology). This was a key step towards taking the railways down the digital route, something that this government is totally committed to.

Under this new (but now-scrapped) IT infrastructure, the railways’ operations like passengers, goods, assets and management functions were to be put on a single platform so that the management down the line could access up-to-date information on a dashboard. This is somewhat akin to what is delivered in a commercial concern through an Enterprise resource planning or ERP solution. Since the railways is huge, installing an all-encompassing solution would need a separate administrative setup which was created under Prabhu through a separate directorate.

Also read: Finding a Solution to the Increasing Number of Rail Disasters in India

To show his seriousness, Prabhu had raised the budgetary allocation for information technology by over 50% to just over Rs 500 crore for the current year (2017-18), in keeping with the plan to spend Rs 5,000 crore on IT over five years. There is no question that for the railways to survive in this day and age it needs top-notch IT infrastructure.

It appears that Goyal believes that whatever is needed can be delivered by pre-existing railway infrastructure.

Thirdly, Goyal has scrapped Prabhu’s decision to have a directorate to house the transformation cell which was set up to implement new ideas stretching across revenue, expenditure and passenger amenities. It was a focused group which would handpick specific ideas and see them through. Some of these ideas came out of the Rail Vikas Sivir organised late last year for railwaymen to come up with fresh ideas on how to do things better.

So, to sum up, Goyal has virtually disbanded the administrative configuration that Prabhu had created to deliver on new areas and areas of emphasis. This is a bit strange as both the ministers know what needs doing foremost is focusing on safety, track renewal and simply speed up the pace of doing things.

The unmistakable impression is that one set of senior railway officials had Prabhu’s ear and another now have Goyal’s ear. A reconfiguration of the administrative setup implies one set of officials will be happy as they will see themselves being put in place for high profile work and another set of officials who were in key positions earlier will see themselves as being shunted out. This implies that the existing bureaucracy which resists change has gained the upper hand again, whereas what is needed is to transform the bureaucratic animal.

The known overriding reality of the railways is “departmentalism”, or interdepartmental rivalry, which has stubbornly remained unchanged despite talk for years about changing it. The one way to get over this culture in the railways – of operating in silos – is to merge different cadres, but that has till now failed to take off. Over a year ago Prabhu devised a plan to merge the eight ‘group A services’ of the railways into two – technical and non-technical – but nothing came of it.

Most know what the railways needs to do: make it safer, speed up the way things work, modernise and go after revenue by transforming marketing. But to progress along all these lines the paramount need is to change the work and administrative culture in the organisation and lift its morale. If this is not done then it does not matter whether there is a new set of directorates or work continues through the existing structure.

Instead of boosting morale, the decision to merge the Railway Budget with the Union Budget has been followed by a decline in morale, which has made things more lackadaisical down the line and led to cutting of corners to meet stiff new targets. This and old, unreplaced rails giving up, have led to the recent spate of accidents.

A recent media report in the Business Standard notes that this kind of change used to happen earlier only when governments changed. But now this has happened with the change of minister under the same government.

One can only hope that there will not be another spate of accidents which will require the prime minister to install a new railway minister to show that he runs a government that can bring about effective change.