Social capital has its conceptual origins in 19th century philosophy. 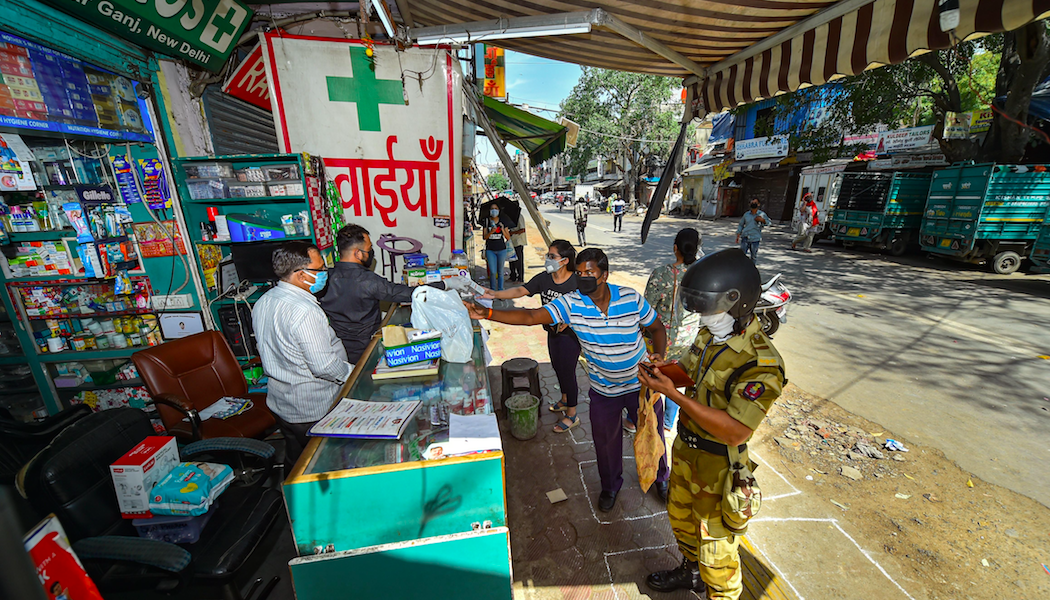 People stand in a queue outside a chemist shop while maintaining a social distance, during a nationwide lockdown in the wake of coronavirus pandemic, in New Delhi, Wednesday, March 25, 2020. Photo: PTI

The success of the ongoing nationwide lockdown to protect against community transmission of the new coronavirus in India will depend on how Indians collectively respond to the plea of physical distancing.

To be sure, the adoption of desirable health behaviour and an overall community resilience, especially during a disease outbreak, are key determinants governing the success of public health interventions. It may seem that the disease is turning the natural instincts of humans – to socialise – into a weakness but evidence suggests we will need a particular kind of social capital to recover from this crisis.

A long and distinguished line of scholarship has shown a persistent link between social capital and overall welfare through a complex network of ties, associations and relations that bind people together as a community.

As such, the idea of ‘social capital’ is a popular export of sociological theory to development policy, public health, democracy and organisation research. It has its conceptual origins in 19th century philosophy. The French sociologist Emile Durkheim, with his emphasis on group life as an antidote to anomie and suicide, and Karl Marx’s analysis of class consciousness and solidarity in the industrial proletariat, show early traces of the notion of social capital.

The concept, however, is not without opposition given its definition and questions about how it can be measured. For example, is it a property of individuals or of memberships and/or aggregations?

Notwithstanding these academic quarrels, the most enduring impact of the concept of social capital is its role in understanding civic engagement and trust in socio-political institutions, both of which have implications for health.

More recently, three public health experts at Harvard University recently published a study showing that bonding – cooperation among those who share similar social identity; bridging – cooperation among varying social classes and identities; and linking – norms of confidence and trust on institutionalised authorities may become critical during an outbreak. They can be established through community-based social norms that relate to healthy habits (such as, hand-washing and physical distancing), diffusion of health information and cohesive social networks offering affective support.

Braiding history, politics and empirical evidence demonstrates how the ‘linking’ dimension of social capital — which captures state-society relations the best — may explain how a society is likely to respond in transforming public health outcomes. Borrowing evidence from a range of studies, especially from poorer contexts, this line of inquiry shows that confidence and trust in representatives of formal institutions, such as the government, law enforcement, social work, healthcare providers, has a major bearing on community welfare.

For example, countries that are succeeding better in their containment efforts, such as Singapore, South Korea, Taiwan and, more recently, China, are also countries that seem to show more confidence in their public institutions. A recent interview with Prime Minister Lee Hsien Loong about Singapore’s impressive efforts to flattening the COVID-19 curve illustrates this point. He repeatedly emphasises the importance of shoring up trust during a crisis.

It is then tempting to ask if the communitarian appeal of physical distancing can yield substantive results in contexts known to have high levels of confidence and trust? Which countries are more likely to succeed in building trust and public reassurance, thus improving compliance, in these times? And should we bother at all with social capital under these exceptional circumstances?

Although not meant to offer any causal claims, the canonical World Values Survey (WVS) offers some insightful leads about the promise and limits of social capital. 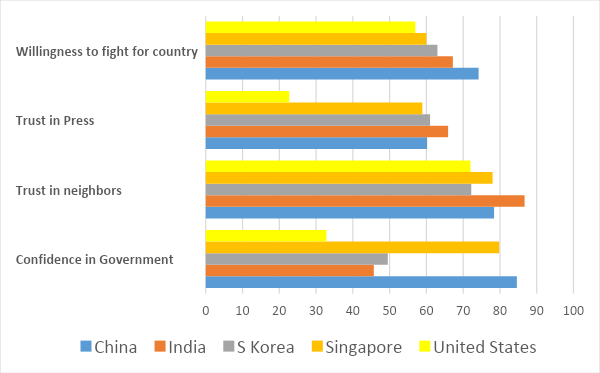 In India, sections of the media and the political class have evoked patriotism, especially with frequent use of combat metaphors. Prime Minister Narendra Modi assured the people in a national address that the coronavirus “war” will likely be won in 21 days, compared to the 18-day battle in the Mahabharata. It is interesting to see India and China reporting higher levels of patriotism in the WVS survey.

To be sure, neighbourhood social capital (trust) has been shown to facilitate higher health information flow with higher moral responsibility – which might be crucial in maintaining greater compliance during a pandemic. When the people have more confidence in institutions, the state has more of an opportunity to mobilise communities for action and holds promise to more effective public health interventions.

Unsurprisingly, public health research that focuses on pandemics recommends that governments and civil society organisations cultivate trust and confidence ahead of disasters. A growing body of scholarship also recognises the need to go beyond economic and demographic losses as a result of the pandemic, and recast our intellectual gaze on the long term consequences of ruptures in social trust.

For example, a recent study of the descendants of those who lived through the Spanish flu of 1918 argued that social disruption and generalised mistrust had devastating long-term consequences on individual behaviour and social interactions in later generations. The study further showed that this loss in social trust constrained economic growth for many decades to follow as well.

Can we count on this blessing – of higher confidence in institutions and overall trust – and data to conclude that India is a potential candidate to successfully flatten the COVID-19 curve? Perhaps not. It is unclear how each of these social capital dimensions perform under social and political duress such as citizenship protests, caste violence and lockdowns, each of which India has been seeing since mid-2019.

While we remain optimistic about the laudatory appeals to social capital, we should be wary of what the American political scientist Robert Putnam called its “dark” side. Simply put, the same set of informal norms and codes that bind communities together can become exclusionary and harmful when a particular in-group attempts to aggressively enforce compliance, creating an oppositional out-group. As Putnam said, “Social capital is often most easily created in opposition to something or someone else.”

The recent news of stigma and ostracism faced by frontline workers such as doctors and airline crew is perhaps social capital’s undesirable side breeding forceful self-surveillance and suspicion of those who are believed to contravene community norms.

So it remains to be seen how India will navigate these contradictory tensions of trust and heightened in-group solidarity under threat of panic and economic downturn.

Tannistha Samanta is a faculty member with the department of humanities & social sciences at IIT Gandhinagar. Her research lies at the intersection of family sociology and public health. She tweets @tannistha14.