In rural Bihar, poor nutrition is caused by interrelated factors like the low-intake of nutritious food, lack of healthcare, poor sanitation, early marriage and the lack of breastfeeding.

Children in Tuniahi Dakhinwari village of Madhepura. Poor nutrition leaves the children vulnerable to disease, susceptible to infections and diseases such as tuberculosis and cholera. Deprived of adequate nutrition in their formative early years, these children remain mentally and physically stunted for life. 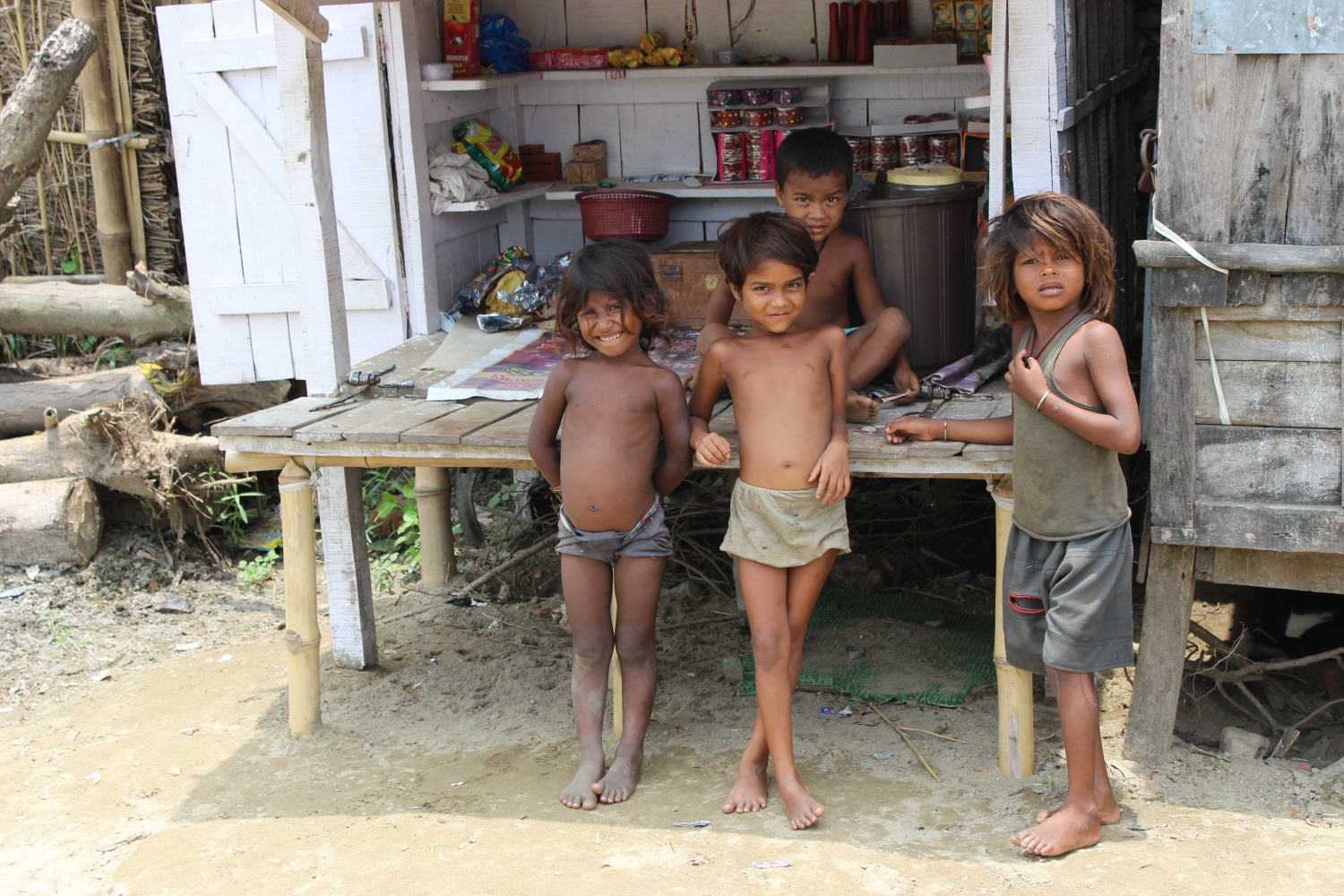 Children in Tuniahi Dakhinwari village of Madhepura. Poor nutrition leaves the children vulnerable to disease, susceptible to infections and diseases such as tuberculosis and cholera. Deprived of adequate nutrition in their formative early years, these children remain mentally and physically stunted for life. Credit: Abhijit Mohanty

World Bank data indicates that India has one of the world’s highest demographics of children suffering from malnutrition, said to be double that of Sub-Saharan Africa. Noble prize-winning economist Angus Deaton says:

“Malnutrition in India is not just related to calorie intake, but India’s dependence on a carbohydrate-based diet with low protein and fat content. Inadequate sanitation also increases in infection-borne deficiencies in nutrients.”

Every year, one million children under five die due to malnutrition related causes in India, according to the UNICEF. The statistics are alarming and far above the emergency threshold for ‘acute malnutrition’ as per the WHO classification of the severity of malnutrition.

According to the Global Hunger Index (GHI) for 2016, India ranked 97 among 118 developing nations, 15.2% of Indians are undernourished and 38.7% of under-five children are stunted. In fact, India’s malnutrition problem is even worse than its neighbouring countries like Sri Lanka, Bangladesh, Nepal and China.

Bihar, the hotspot of malnutrition

High infant and maternal mortality and malnutrition continue to be a scourge in Bihar, which has become byword for poverty, illiteracy and deprivation nationally. The poor nutritional status, especially in rural Bihar, is the outcome of complex and inter-related factors. These include the low-intake of nutritious food, non-availability of quality health services, absence of adequate community health workers, low institutional delivery, poor sanitation and hygiene. In addition, social practices such as early marriage, pregnancy and lack of breastfeeding also contribute to higher malnutrition rate. 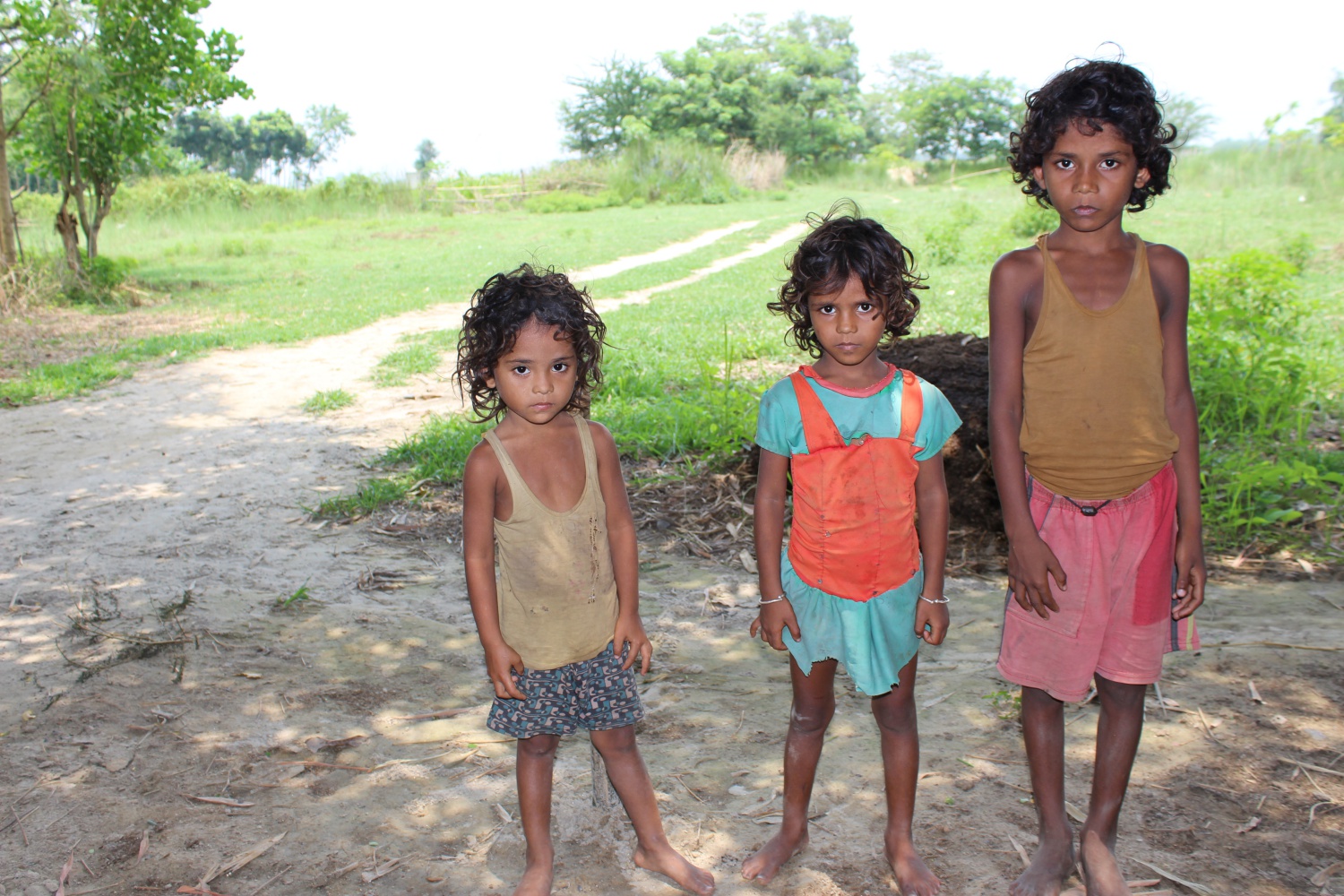 Children with marasmus, underweight, brown hairs, rickets legs, hollow eyes could be found in every other family in Tuniahi Uttarwari village of Madhepura. Credit: Abhijit Mohanty 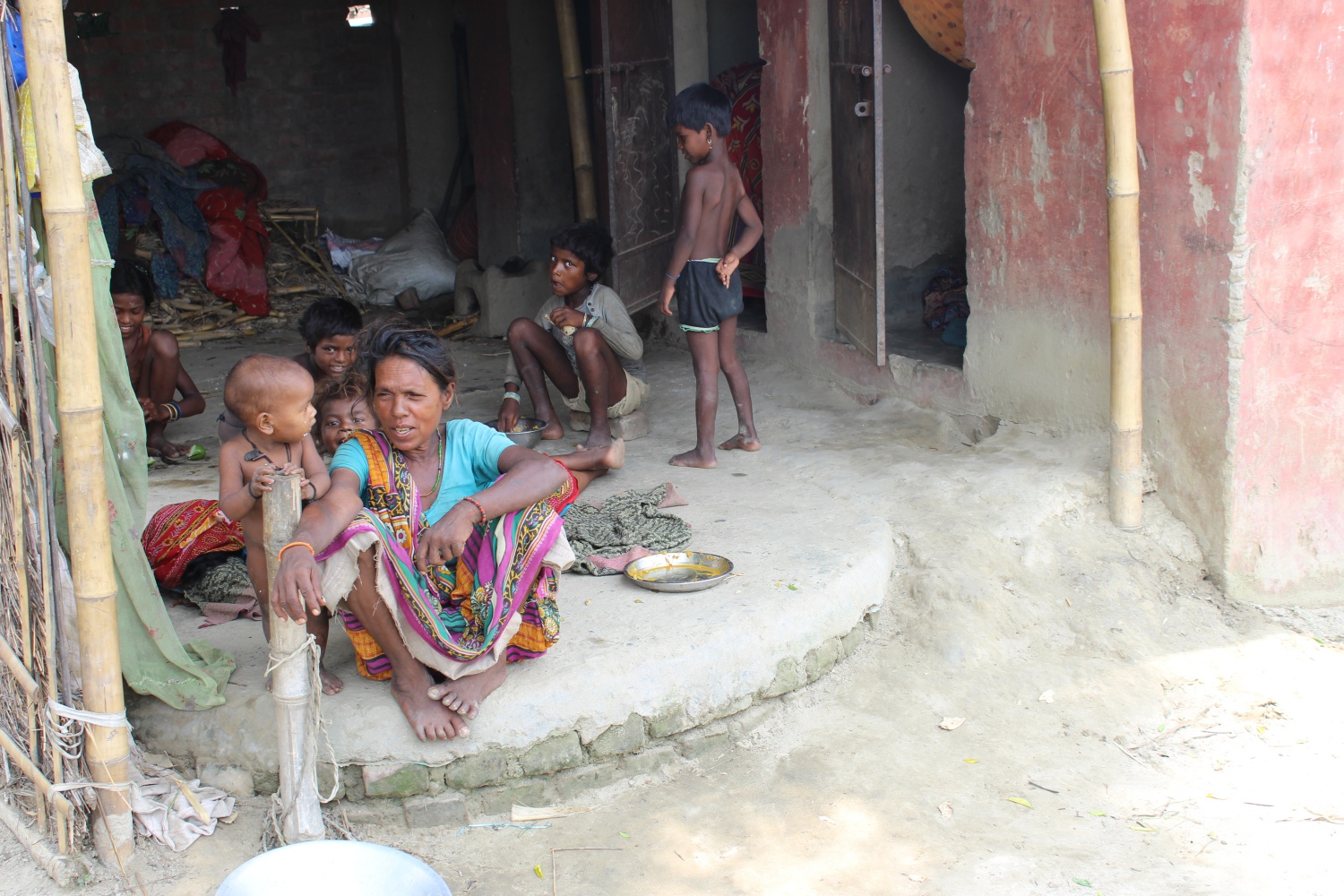 “Since we have a big family we don’t have enough rooms to accommodate all. We are poor people. We don’t have money to build new house. People in nearby village laughs at us. They tease us by saying ‘dekho dekho ye log to souchale main rahete he (Look these people live in a toilet)”. Geeta Devi along with her daughter-in-laws and two son lives in Ganeshthan village of Madhepura district. Credit Abhijit Mohanty

In the last two decades, several initiatives have been taken up to address malnutrition in the state, particularly among children, adolescent girls and women, but the results are not promising. Take for instance the ‘Bal Kuposhan Mukta Bihar’ (BKMB), an ambitious campaign to address malnutrition, launched by the government of Bihar in October 2014. The objective of BKMB is to reduce the malnutrition rate in the state and address Infant Mortality Rate related health problems in the long-run. The programme aims to reduce child malnutrition below 30% for 0-3 year olds from the current status by the end of 2017. 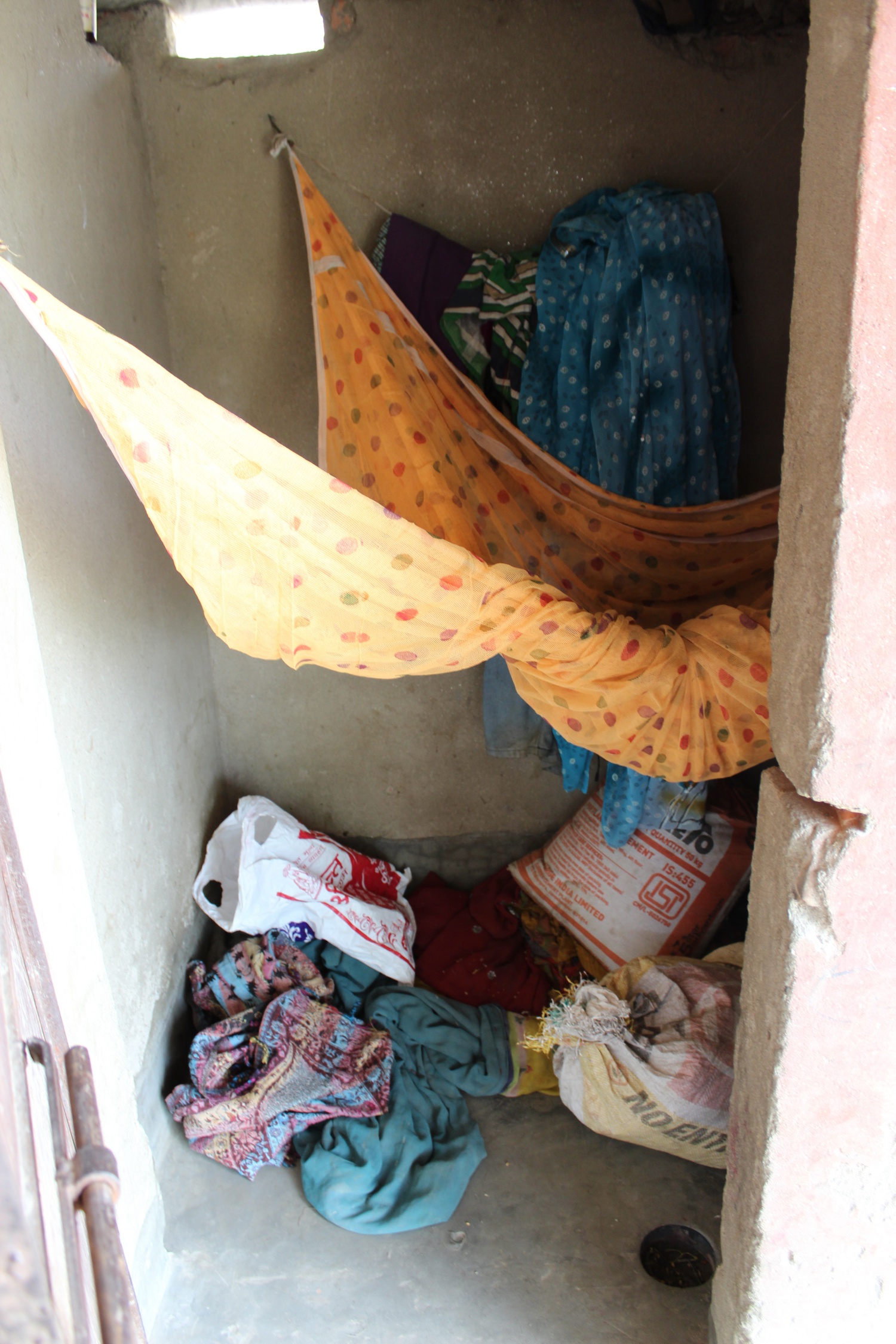 “This is a bathroom. You can see a small hole on the floor made for the drainage. But for us this is our store room. We keep our food grains and cloths here”, says Geeta Devi. Impact of poor hygiene and sanitation are not only restricted to health outcomes alone, it has implications on educational outcomes as sick children do not attend schools. Besides inadequate sanitation and toilet facilities for girls reduce their school attendance and therefore are a major constraints towards removal of gender disparity in education. Credit: Abhijit Mohanty 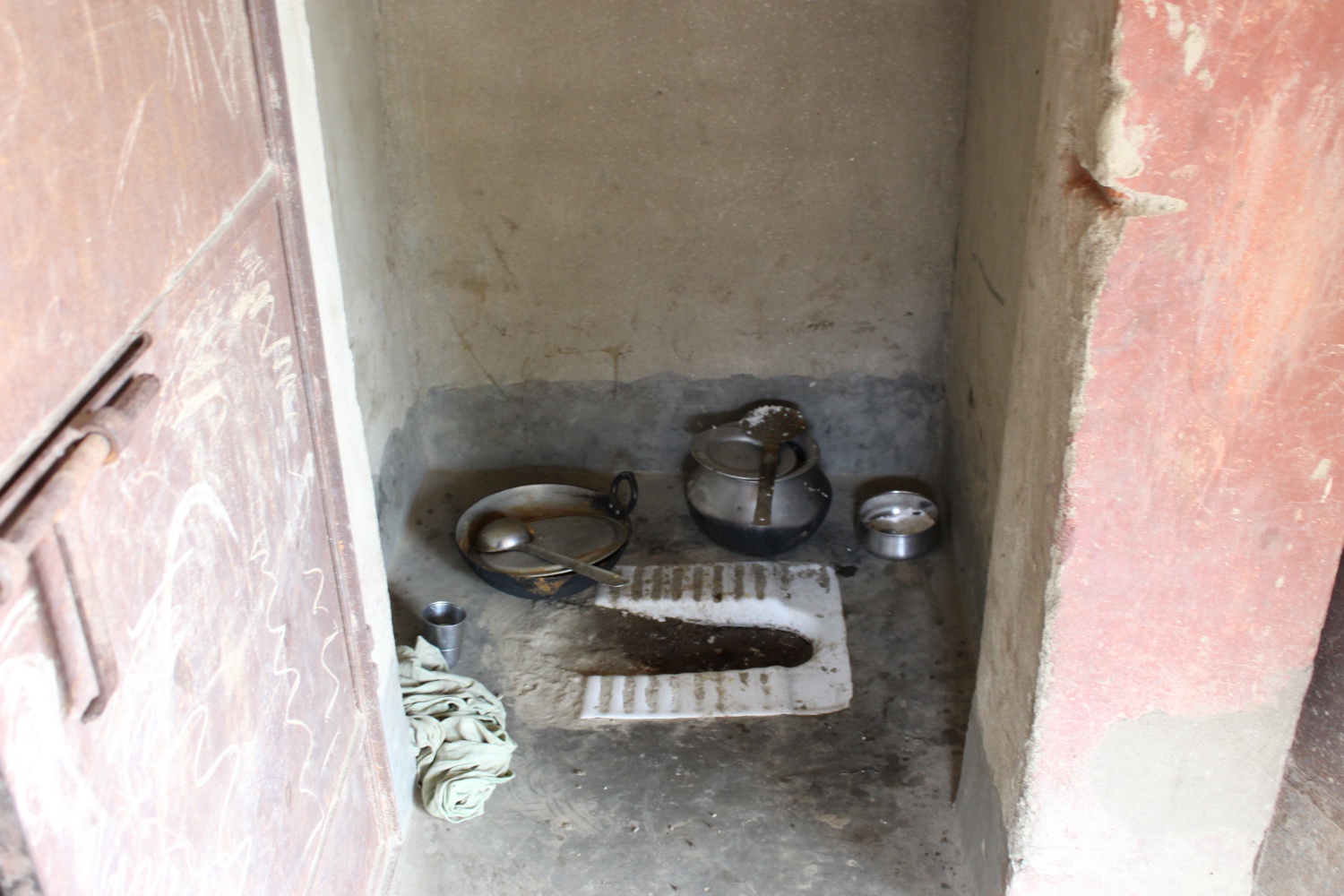 “We keep our cooked food in this toilet. Because it has a door that we can lock after placing food inside. We are forced to do this because there is no wall around us where we are living. If we keep food outside it will be eaten by stray dogs and cats”, says Geeta Devi. Due to persistence of widespread open defecation in the rural areas, children are usually exposed to transmitted infections. As a result small intestine gets affected, reducing the capacity of the body to absorb nutrients. Credit: Abhijit Mohanty

Similarly, the state government launched a new phase of the Integrated Child Development Services (ICDS) in 2008. This new phase of the programme, termed as ‘ICDS-IV’ aims to strengthen and improve its efficacy, targeting districts with high child malnutrition. And improve the outreach and quality of service delivery, strengthen institutional framework and need-based training of ICDS functionaries, as well as ensure increased involvement of local communities as key stakeholders. 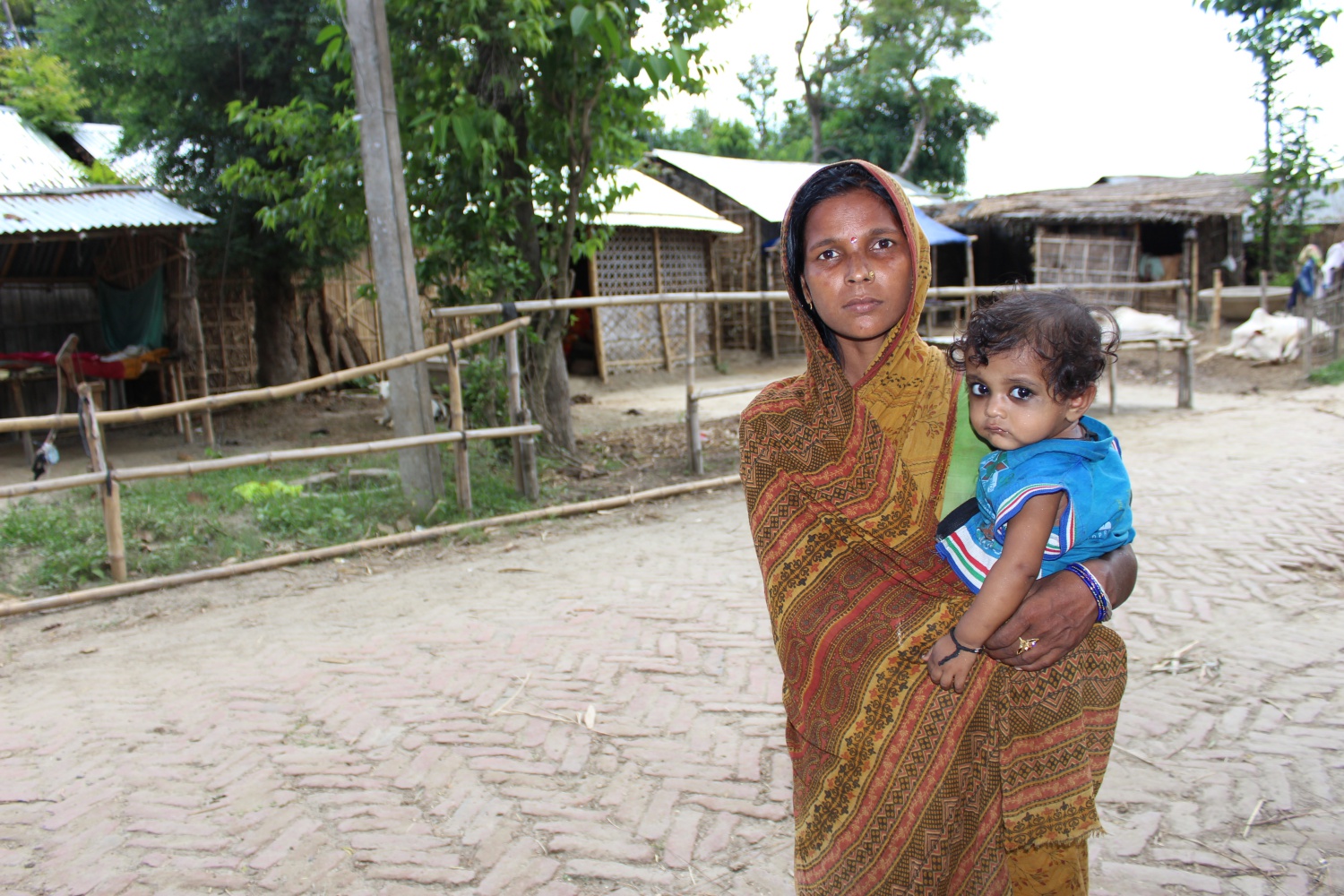 “We don’t take our children under 6 months of age to the field where we work. Because it will expose them to ‘Nazar’ (Evil eye). They will fall sick”, says Laxmi Sada a native of Ganesthan village of Madhepura. These means children are left at home for the duration of the work day, the child is not breastfed, in turn predisposing to become weak.

But all these programmes have never been implemented in its true spirit and letter at the grassroot, says activists. According to the National Family Health Survey-4 (NFHS-4) 2015-16 Bihar hosts 48.3% of stunted children – making it one of the most undernourished states of India. Only 7.5% of children in the state receive adequate diet. The survey further reveals that 63.5% of children aged 6-59 months are suffering from acute anaemia. While 58.3% of pregnant women in the age group of 15-49 years are suffering from anaemia, further indicating that juvenile anaemia is merely a manifestation of the malnutrition cycle transmitted through generations.

Mohua Chatterjee, who works as a Program Head at Child Rights and You, says:

“Almost two-third of children under the age of three years in Bihar is not breastfed within the first hour of birth. Child malnutrition is an irreversible phenomena in the lives of children, its effects are felt through adolescent and adult life.”

After the age of two or three years, the effects of chronic malnutrition in a baby become irreversible. This means, that to break the inter-generational transmission of poverty and malnutrition, it is essential that children at risk must be reached during their first two years of life. 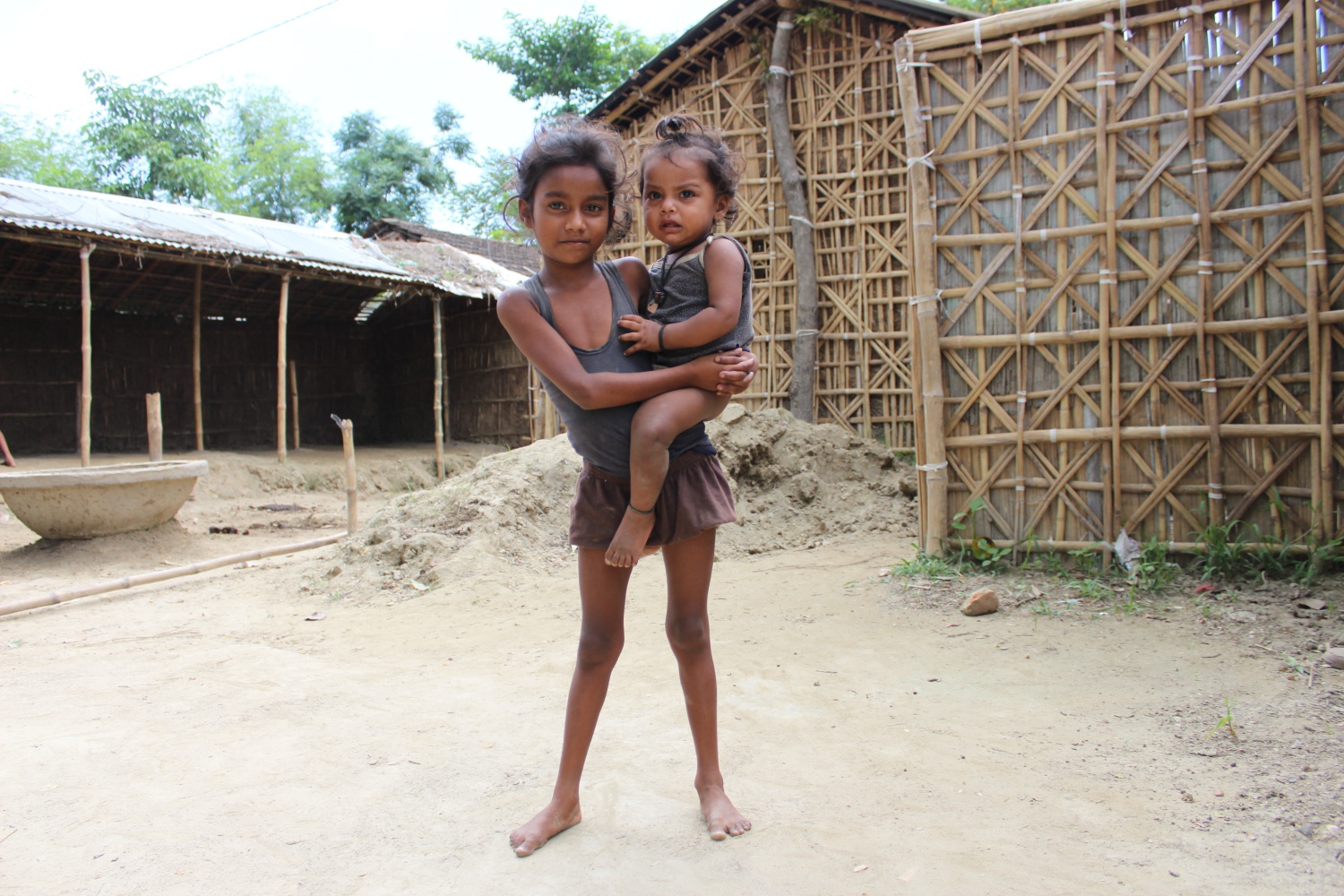 Rita carrying her younger sister. She is suffering from rickets legs. The most common cause of rickets is lack of vitamin D or calcium in a child’s diet. Rickets is among the most frequent childhood diseases in many developing countries. Credit: Abhijit Mohanty

Dipa Sinha, an activist associated with the Right to Food Campaign, explains:

“Generally girls in poor households are inadequately breast-fed and less likely to be provided with quality healthcare and access to sanitation. Overall, a girl is far more neglected than a boy, especially if she is a third or fourth child in the family.”

According to a study conducted by Medecins Sans Frontiers (MSF) India between 2009 and September 2011 in Bihar:

“More than 8,000 children admitted at Dharbhanga medical centre for the treatment of acute malnutrition, 62% were girls – even though girls younger than 5 years constitute only 47% of the local population”.

Ziaul Haque, who works as a Manager with the MSF, Dharbhanga,

“Girls constitute more than two-thirds of patients, who are admitted and also those who drop out before completing the treatment.”

“A healthy, five months old baby should weigh at least 5 kilograms, but we come across two years olds weighing that.” 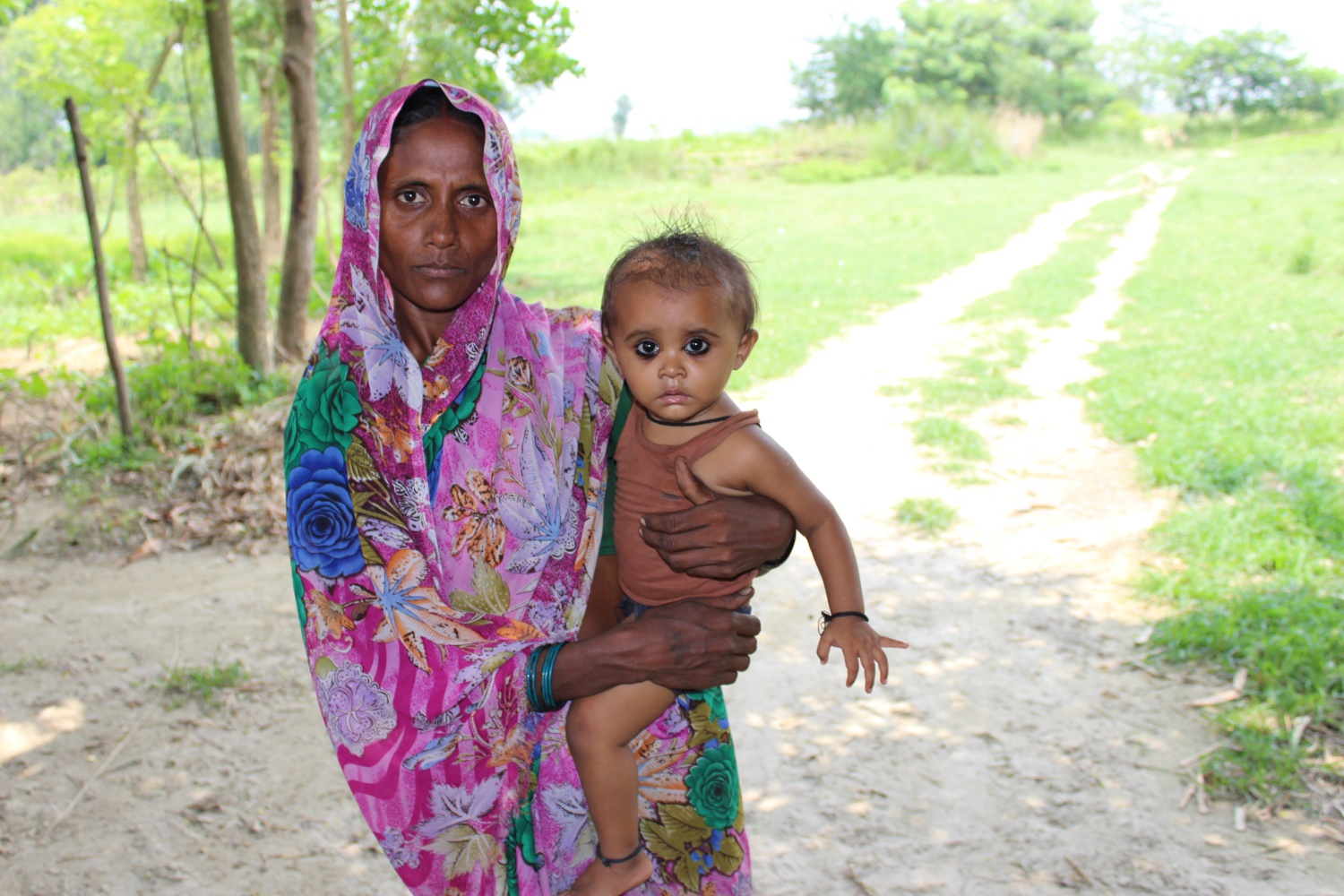 “My son Ramdhun contracted cold and fever when he was three months old. The fever did not subside, so I took him to the local doctor, who said he had pneumonia. Three days after he died”, says Jayanti Devi of Tuniahi Uttarwari village of Madhepura. 2 years after Jayanti gave birth to a son, she has lost almost half of her weight. Her pale face and hollows eyes speak the rest.

Around two-third women in child-bearing age are malnourished in Bihar – the highest in the country. It should be noted here that the ‘Mamta’ scheme, aimed at meeting nutritional requirement of pregnant women and ensuring safe motherhood has failed to have the desired effect in the state.

“There are several instances where women have not received their allowance even after delivery, they have to visit the Child Development Project Officer several times but to no avail,” said Mithlesh Vatsa, a Madhepura-based journalist. “Since many of the pregnant women are migrating in search of work outside, they are unable to receive their financial assistance on time”, adds Vatsa.

It has been reported that due to non-availability of assistance at the proper time, pregnant women remain deprived of iron and folic acid supplements, vaccination and medical checkups. As a consequences of which women are giving birth to malnourished and underweight babies. “Maternal malnutrition increases the risk of poor pregnancy outcomes including obstructed labour, premature or low-birth-weight babies and postpartum haemorrhage”, said M. K. Jha, a Patna-based doctor. 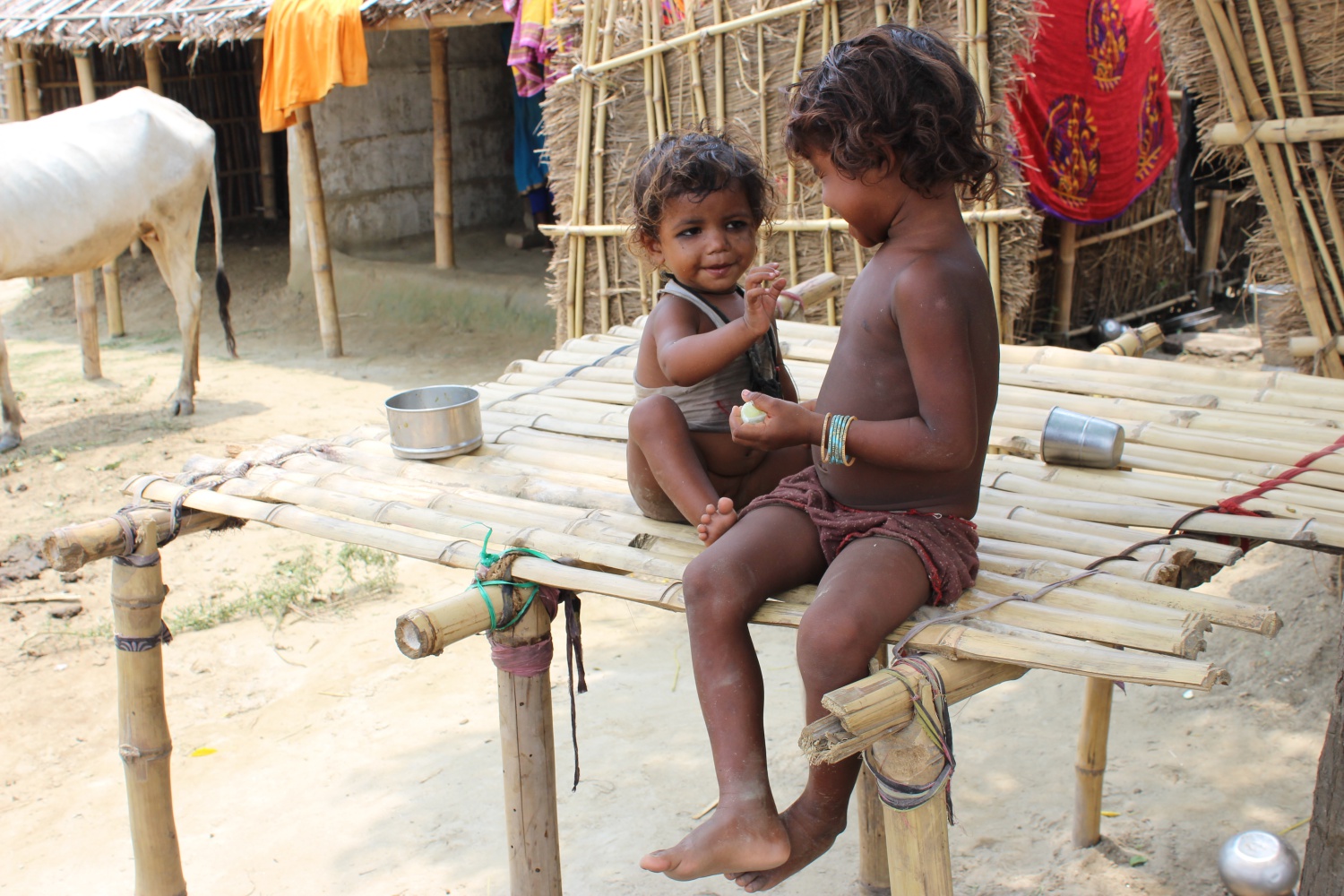 Scenes of mosquito bites all over the body among the children in Ganesthan village of Madhepura are quite common. India bears a huge burden of mosquito-borne diseases, contributing 34 percent of global dengue and 11 percent of global malaria. Despite of this, the government has made no headway in talking the mosquito menace.

In Bihar, Vitamin A deficiency amongst pre-school has long been a public health problem. But thanks to the UNICEF for working with the state government to strengthen the child development and nutrition programme’s outreach and target children who would otherwise be left out.

“The speciality of the Bihar campaign is the creation of additional sites for the rounds to reach uncovered areas and ensure vitamin supplementation to children from excluded areas. These additional sites has increased outreach to children, which is reflected in the fact that each site, on an average, gives Vitamin A dose to approximately 115 children during the round.”

“Our efforts are to create new additional sites as per the local conditions and reach more to the backward caste and tribal habitations.” 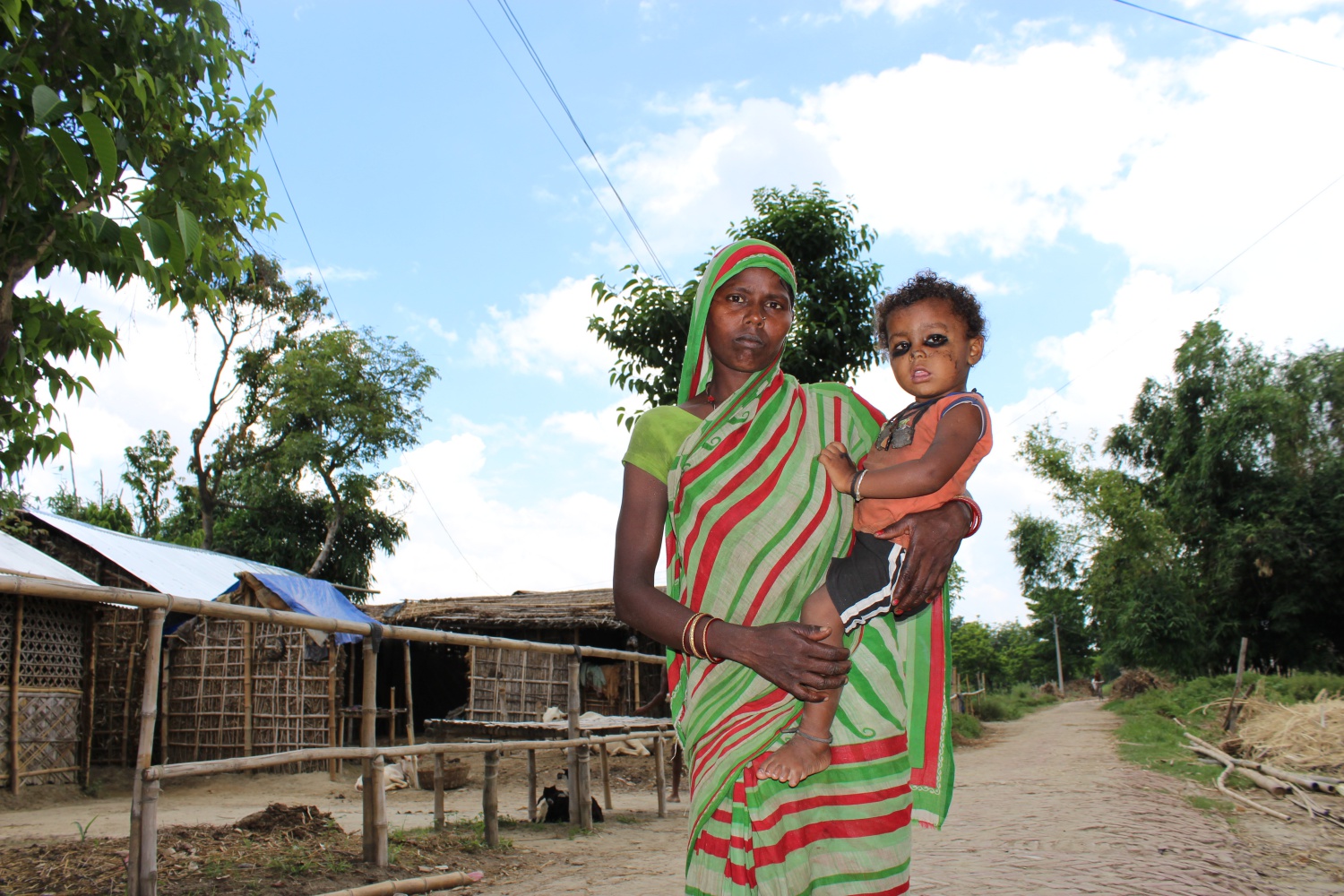 There is a pressing need to address the structural and sector-specific concerns, both in the short and long term to eradicate hunger and malnutrition. For instance, agriculture is a primary source of livelihood for the rural populace, therefore it is imperative to improve the agricultural pathways to nutritional security. “Government should promote traditional crops which are rich in multi-vitamins and resilient to local climatic condition. Such initiatives will play a key role in ensuring food and nutritional security in a sustainable way,” says Jintu Kalita, who works with a local NGO in Madhepura.

Pro-poor policies to tackle hunger need dovetailing of the longer-term standpoint through empowering the poor and improving their entitlements. It is therefore important that at the state and district level there should be an integrated and a coordinated approach to streamline and ensure effective implementation of the public delivery programmes.

Abhijit Mohanty is a Delhi-based development professional. He has worked with the indigenous communities in India and Cameroon, especially on the issues of land, forest and water.