Pellet guns have become the first line of attack for security forces against protestors in Kashmir, its unabated use blinding hundreds in the Valley. 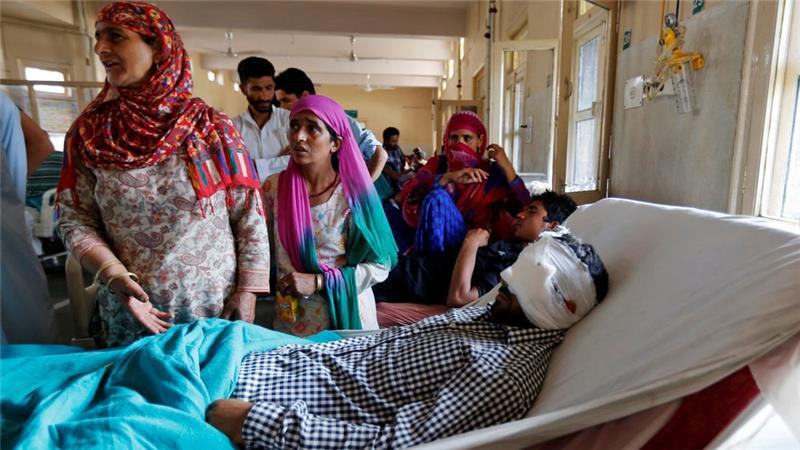 Srinagar: “He can’t see with his left eye. The vision in his other eye, which apparently looks good, will too fade away as pellets have pierced his optic nerve. It is a helpless situation,” a surgeon said in a hushed tone after examining Maisar Mir at the Shri Maharaja Hari Singh (SMHS) hospital in Srinagar.

Mir, a class X student, was caught in protests against mysterious braid chopping incidents in the Nowgam locality of the city on October 14 when, according to his uncle Bashir Ahmad, a policeman fired lead pellets directly at him. The pellets have bruised his face, crushed his eyelids and have caused a haemorrhage. Mir now stares at the prospect of complete blindness.

Apart from Mir, nine more victims, including Sonu of Nawab Bazar and Tufail of Chanpora were admitted to the hospital the same day, with eye injuries.

However, the condition of victims like Mir has attracted little media attention. There has been no reaction from the Jammu and Kashmir Coalition of Civil Society (JKCCS) which headed a campaign last year to seek a complete ban on pellet guns. And with the state government backing the use of pellet bullets, despite the huge humanitarian cost, pellet injuries seem to have become the new norm in Kashmir. Though the number of pellet injuries has significantly come down this year.

According to hospital records, since July 2016 – when the killing of the Hizbul Mujahideen commander Burhan Wani triggered a massive uprising in the state – Mir is the 75th person whose both eyes have been punctured by pellets.

“My son was a blossoming flower. I fear even to imagine that he will have to live the life of a blind person,” Mir’s father, Muhammad Ramzaan, told The Wire.

The pellet shotguns were introduced as a ‘crowd control weapon’ by the government in 2010. Today, they have seem to have become the first line of defence for security forces against protestors in Kashmir. Their unabated use has blinded hundreds of youths in the Valley. In the past 13 months, 1091 people, including minors and students, who were treated at the hospital’s ophthalmology ward have partially or completely lost vision in their eye(s).

An Indian policeman aims a gun towards the protesters during clashes after the Eid al-Adha prayers in Srinagar, September 2, 2017. Credit: Reuters/Danish Ismail

According to hospital records, out of these 1091 victims, 171 have no vision in their injured eye. Out of the 76 victims injured in both the eyes, 50 have no vision at all in one eye and minimal vision in the other, ranging from 10-40%. Another 20 victims have had one or both eyes removed due to the severity of their injuries.

At least 100 civilians were killed and scores injured across the Valley during last year’s uprising, with reports in local media putting the number of people with eye injuries from pellets at around 15,000.

Jammu and Kashmir chief minister Mehbooba Mufti, while speaking in the state assembly on January 10 this year, announced the formation of special investigation teams (SIT) at district levels to investigate the killings and injuries in order to ascertain if excessive force was used to handle the situations. After more than nine months after the announcement, there is still no word from the government about the  investigations.

Even the promise made by the chief minister that those blinded by pellets would be given free education and jobs hasn’t been implemented so far. Only 34 victims have got a compensation of Rs 1 lakh and Rs 2 lakh respectively for the loss of vision in one and both eyes, against the announcement of Rs 4 lakh. None have got  jobs so far.

Expressing concern over such cases, Amnesty International, on September 23, called for a complete ban of pellet guns in the state. The human rights watchdog came down heavily on the both state and central governments, saying that a weapon (pellet guns) meant to be deployed for ‘crowd control,’ has been responsible for blinding, killing and traumatising people in Kashmir.

“School-going boys and girls have lost vision in one or both eyes…and college students have had to give up their dreams of pursuing higher education. Young men and primary breadwinners say they have become a liability for their families,” the report brought to fore the appalling condition of the victims, highlighting that many pellet victims have not regained eyesight despite going through repeated surgeries. While some victims still have pellets lodged inside their eyes as it is medically too risky to remove them.

A fortnight after Amnesty International’s report, the Central Reserve Police Force (CRPF), on October 8, said that it sent 21,000 rounds of newly developed plastic bullets to Kashmir for tackling street protests, arguing the bullets are “less lethal” than pellet guns.

A senior ophthalmologist who has been treating pellet victims at the SMHS hospital for more than a year said they continue to receive eye injuries though the number has been “far less” than last year.

Also read: Use of Pellet Guns Has Caused a Public Health Crisis in Kashmir

“The pellets have ruined lives in Kashmir. Once an eye is hit by a pellet, there is no surety about regaining vision. Plus, the treatment takes so long that it exhausts a patient and his family – physically as well as financially,” the doctor told The Wire. He added that all eye injuries were “disabling” in nature and that in medical terms, the victims were “legally blind” – a condition where the field of vision is less than 20 degrees and visual acuteness is less than 6/60.

Danish Rajab Jhat is one such victim from Srinagar’s Rainawari locality. A close-range shot fired by security personnel on July 17, 2016, left his face and eyes bleeding. The impact of the shot was so strong that a full pellet cartridge was stuck in his left eye, forcing its removal. As a result, the 24-year-old youth, who was the lone bread earner in the family, lost his job. More than a year after, Jhat still needs support to walk.

“I had some vision in my right eye but that too is gone despite three surgeries. I can only see a shadow in front of my eyes now,” said Danish who was given a compensation of Rs 2 lakh for the injuries that left him blind. Jhat’s left eye socket is now filled with an artificial eyeball and the doctors are not hopeful that he will regain even ‘usable’ vision in his right eye.

After seeing the condition of the pellet victims, the Jammu and Kashmir high court bar association last year filed a petition in the court seeking a ban on the use of pellet guns. In response, the CRPF justified the use saying that in case the weapon was withdrawn, the only option left with them would be to open fire which can cause more fatalities. The court justified the use of the weapon, calling it as “inevitable”.

The ruling forced the bar to appeal before the Supreme Court. While the case is still being heard, each time a protest breaks out in Kashmir and forces resort to firing pellets, a new victim is added to the official statistics.

“It is appalling that nobody talks about us anymore. While the government is responsible for our condition, people too have forgotten us,” said 22-year old Adil Rehman from Karimabad in Pulwama, who suffered pellet injuries in both his eyes in June. His injuries forced him to drop out from college. He visits the hospital every fortnight for a checkup.

“This is what my life has become now. I wanted to become a teacher but this darkness has crushed my dream,” Rehman told The Wire. “At least this blindness is a constant reminder of the brutality that we have faced. Isn’t it?”