In January 2018 alone, biometric authentications for 31,199 ration cards through PoS had failed, denying rations to around 1,20,000 people. 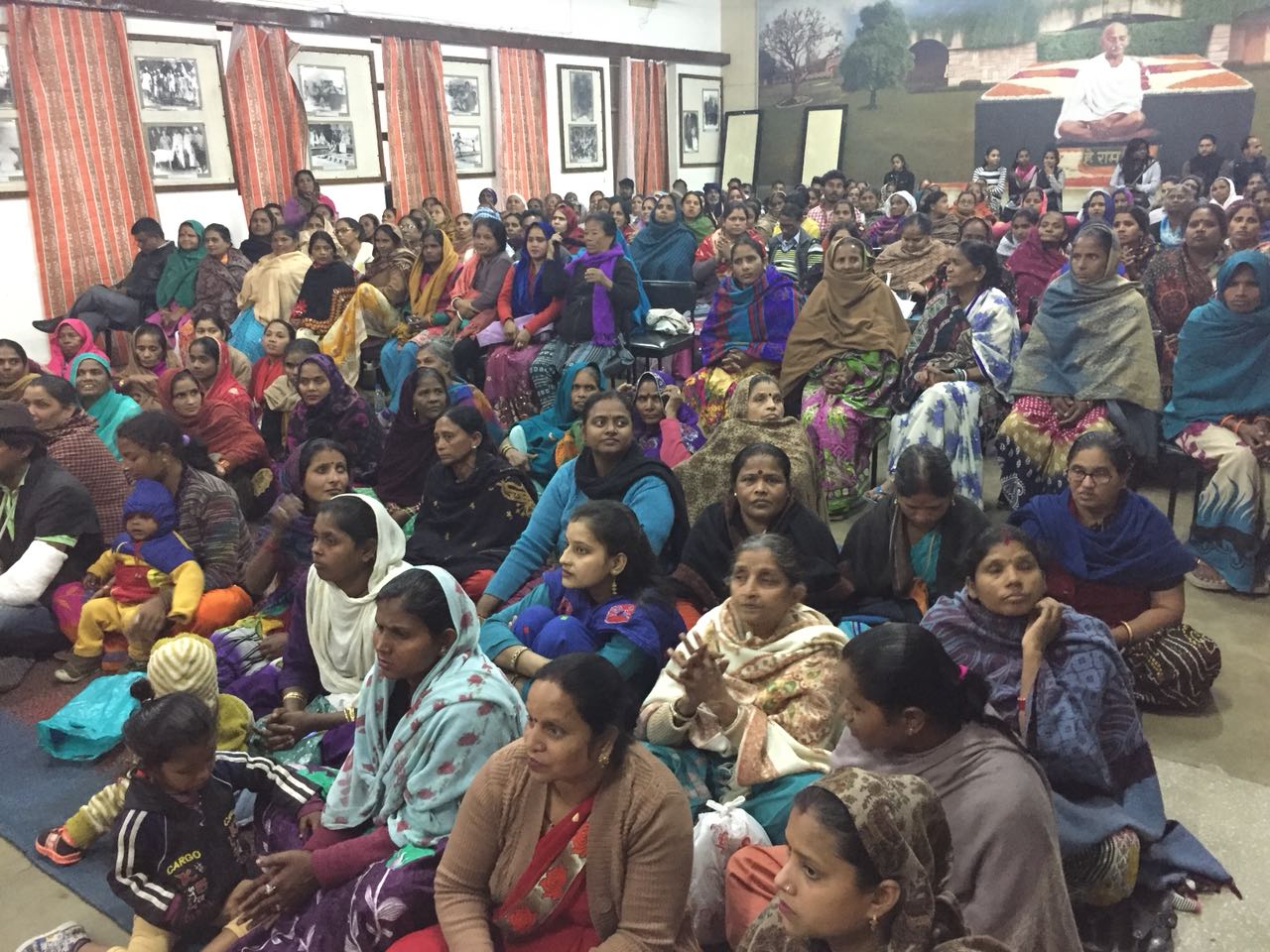 In January 2018 alone, biometric authentications for 31,199 ration cards through PoS had failed, denying rations to around 1,20,000 people.

New Delhi: The flaws creeping into the public distribution system (PDS) due to the failure of the biometric authentication mechanism is not just creating problems for ordinary citizens in accessing rations, especially the marginalised sections, but is also defeating the entire purpose of the exercise – to check pilferage of grains– as it has become a tool in the hands of unscrupulous shopkeepers.

At a public hearing organised by the Delhi Rozi Roti Adhikar Abhiyan (DRRAA) and Satark Nagrik Sangathan (SNS), hundreds of people, especially women, from different districts and various marginalised communities said they had not been able to access their legal entitlements of rations ever since the linkage of Aadhaar was made mandatory under the National Food Security Act by the Delhi government.

Aimed as a solution, Aadhaar-linkage has become a problem

Several citizens of Delhi spoke about how shopkeepers were exploiting the provision of mandatory Aadhaar-enabled authentication for denying rations to the beneficiaries and siphoning off the grains.

Mohini Devi, a 77-year-old resident of Kusumpur Pahari in South Delhi testified that while she did not receive her rations for January 2018 as her fingerprints could not be authenticated using the Aadhaar-enabled point of sale (PoS) device, the online PoS data showed that she had received five kg of ration on January 20 after Aadhaar authentication.

Similarly, Uma Shankar, another resident of Kusumpur Pahari, testified that seven members of his family were listed on the ration card and this entitles them to 35 kg of grain every month. He said when three of the family members had visited the PDS shop repeated in January but did not get the rations as their fingerprints could not be authenticated. However, the online PoS data showed that the family had received 35 kg of ration on January 24, after one person’s fingerprints got authenticated.

Citing these cases, the DRRAA and SNS claimed that these were stark examples of the grains being pilfered by the shopkeepers.

The food rights groups also highlighted how Aadhaar-based biometric authentication was being done through the PoS devices that have been installed in every ration shop. But, they charged that introduction of PoS has led to large scale exclusions of the poorest from their monthly legal entitlement to food. “Scores of people have been unable to access their ration as the fingerprints of family members, who are listed on the ration card, are not being authenticated through PoS,” the groups said. 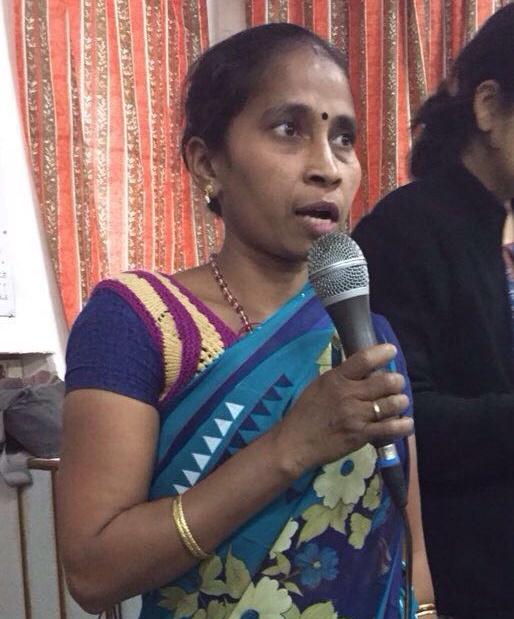 Phoolmati narrated how her biometrics couldn’t be authenticated but later she learnt from the online data that her ration status was showing ‘delivered’. The Food and Civil Supplies Department refused to take her complaint stating. Credit: The Wire/Gaurav Vivek Bhatnagar

“Therefore, despite possessing a valid ration card and having it linked to the Aadhaar number of family members, they are unable to access rations. The worst off are single member households like those of widows or disabled persons, where if the biometric authentication of one person fails, there is no alternative. Households consisting of only elderly people are also finding it extremely difficult to authenticate themselves,” the food rights groups said.

Citing a case in point, they presented the testimony of Devika Bai, a 75-year-old resident of Moti Lal Nehru Camp, Munirka who is the only person to be listed on her ration card. When she went to the ration shop in January, she was not given her ration as her fingerprints could not be authenticated using PoS. She made several attempts to get the authentication done, but failed. Since there is no one else listed on her ration card, she has been not been receiving the much-needed grains.

According to DRRAA and SNS, in January 2018 alone, biometric authentications for 31,199 ration cards through PoS had failed. With an average of four beneficiaries per card, around 1,20,000 people are expected to have been denied the rations during the month.

Families are spending hours to get rations now

The testimonies also revealed that often several members of a household had to present themselves at the ration shop before any fingerprints matched and that this was leading to a wastage of productive hours, and consequently a loss of earnings. In many cases, as with Meena, a resident of Motilal Camp, who had to make her son miss school to go to the ration shop, children are being forced to miss classes to help the family access their foodgrain entitlement.

The food rights groups said these problems were also highlighted in the pilot undertaken by the Delhi government, where the scheme for universalising PoS for all ration shops was pushed without addressing the problems.

The rights groups have also pointed out that exclusions due to PoS are in addition to the already existing exclusions due to Aadhaar being made mandatory for applying for a ration card. “Since 2013, when NFSA was rolled out in Delhi, the guidelines require each member of the household to possess an Aadhaar number. This is despite repeated orders of the Supreme Court that Aadhaar cannot be made mandatory for accessing entitlements or services,” they said.

Several residents also testified how children had been left out of the purview of food security as their names could not be added to the ration card because they did not possess an Aadhaar card at the time of applying for a ration card.

Another interesting testimony came from Anwar who works with the homeless in Delhi. He explained how out of the about 2 to 2.5 lakh homeless people in Delhi, only 5% possessed an Aadhaar card due to the lack of a proper address, and most poor citizens were left out of the food security scheme.

No rules for transparency, grievance redress and accountability

Members of DRRAA charged that the Arvind Kejriwal government has also failed to put in place the requisite framework for transparency, grievance redressal and accountability as mandated by the NFSA despite passage of more than four years since the enactment of the law in Delhi.

“The law requires the state government to set up a State Food Commission and appoint District Grievance Redressal Officers to ensure time-bound redress of complaints. Despite the Delhi high court and the Supreme Court specifically stating that there should be independent and full time positions, the government has failed to put in place the requisite framework,” they said, adding that till date there is also functional State Food Commission in Delhi.

Not a single social audit of ration shops so far

The group also noted that while the law requires the state government to set up a mechanism for periodic social audit in the functioning of ration shops and other programmes under the NFSA, till date the Delhi government has not undertaken a single social audit. It has also not promulgated rules to operationalise the accountability measures of the NFSA.

About the need for undertaking these measures, the group said an audit of 74 randomly chosen ration shops by the DRRAA and SNS showed that more than 80% were closed at the time they should have been open. Also none of the shops were found displaying the details of the statutory grievance redressal framework.

Anjali Bhardwaj of DRRAA said if the Delhi government was serious about addressing corruption in the system, it would have to put in place the requisite statutory framework of social audits, grievance redress and transparency.

An expert on law and poverty, Usha Ramanathan, who heard the peoples’ testimonies, said “They (the poor) are already living at the margins and Aadhaar being made mandatory has pushed them over the edge.”