As Millions Fear Starvation, Govt to Convert ‘Surplus’ Rice Into Ethanol for Sanitiser

While rights activists and researchers call for the PDS to be universalised, the Centre appears to have other plans. 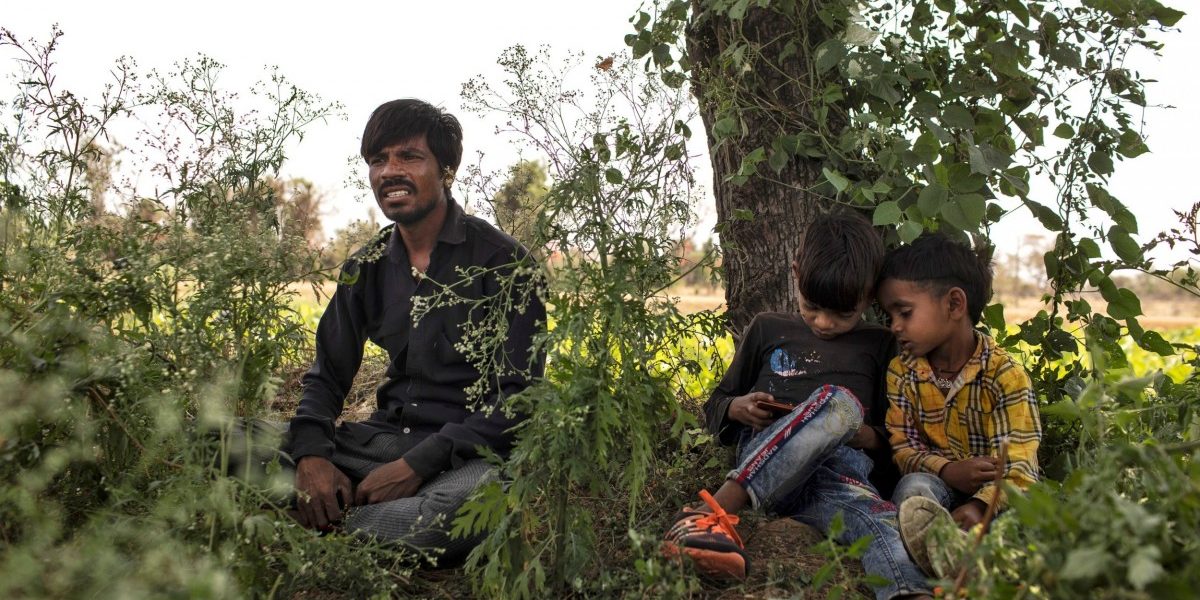 Dayaram Kushwaha, a migrant worker who returned home from New Delhi, takes a break from harvesting wheat as his children watch videos on a mobile phone, during nationwide lockdown in India to slow the spread of the coronavirus, in Jugyai village in Madhya Pradesh, India, April 8, 2020. Photo: Reuters/Danish Siddiqui

New Delhi: The Ministry of Petroleum and Natural Gas has announced that the ‘surplus rice’ available with the Food Corporation of India will be “allowed to be converted to ethanol for utilisation in making alcohol-based hand-sanitizers”.

The announcement came after a meeting of the National Biofuel Coordination Committee (NBCC) chaired by petroleum minister Dharmendra Pradhan. It cited the National Policy on Biofuels 2018, which says that if in a particular year there is projected to be excess supply of food grains, these surplus quantities can be converted into ethanol.

The ministry has so far not clarified what it means by ‘surplus quantities of rice’, at what price it intends to buy the rice from FCI and when.

“I am surprised that at this time we are talking about converting rice into sanitisers. Millions who are outside PDS are on the brink of starvation. We are already getting reports of hunger deaths from so many states across the country. At this time, the focus of the government should be on finding ways to ensure that the excess grain is distributed to those who need them and not on making sanitisers,” said politician and social scientist Yogendra Yadav.

Several hundreds of million who are outside the public distribution system net also face food insecurity, particularly now when incomes of several have been brought either to zero or close to zero.

As The Wire has reported, at least 108 million people are outside the PDS. Several million more are made vulnerable as economic activity has come to a standstill.

The clamour for universalising PDS has grown in the last few weeks. Nobel laureates Amartya Sen and Abhijit Banerjee and former RBI governor Raghuram Rajan too have called for the measure to be adopted at least for the next six months. “The cost of missing many of those who are in dire need vastly exceeds the social cost of letting in some who could perhaps do without it,” they said in their article for the Indian Express.

Interim president of the Congress party Sonia Gandhi has also said that those who are not covered under the National Food Security Act (NFSA) and face insecurity should be provided free rations.

According to a recent report by the Stranded Stranded Workers Action Network (SWAN) – started by a group of 73 volunteers on March 27 – a large proportion of the migrant workers who are away from their homes without ration cards are already facing hunger.

About 50% of the 11,000 workers they had been in touch with reported having rations left for less than a day. While 74% had less than half their wages remaining, 89% had not been paid by their employers during the lockdown despite Prime Minister Narendra Modi’s appeals to employers to ‘take care of their workers’.

The Wire’s analysis shows that India has the stock of food grains needed to universalise PDS for at least six months. If from the estimated population of 1.37 billion, 1.1 billion are to be provided 10 kg food grain per month for six months, it will require 66 million tonnes of food grain.

Assistant professor at Ambedkar University Dipa Sinha, writing for The Wire, also said that around 65 million tonnes of grain would be needed to universalise PDS for six months, assuming that the grain is provided to 80% of the population. “Therefore, universalising the PDS with a higher quantity of 10 kg per head for six months as an emergency response to the current situation is within the realm of the possible,” Sinha wrote.

Yadav also contends that the fact that the government is contemplating converting rice – that can feed millions who face starvation – into sanitiser – which is unlikely to be accessible to the poor – brings into focus the class bias in the government’s approach and inherent in society.

He goes on to say that this is perhaps the first time that the rich feel threatened as they are equally vulnerable to falling sick from COVID-19. “In each country, there are different euphemisms for the ruling class. In India, that euphemism is the middle class. And if the middle class feels threatened then the who world has to be turned upside down. The poor have to pay the price.”