Lok Sabha adjourns for an hour after paying respect to Pranab Mukherjee and 14 other serving, ex-MPs. PM urges unity over China issue while Congress questions doing away with Question Hour. 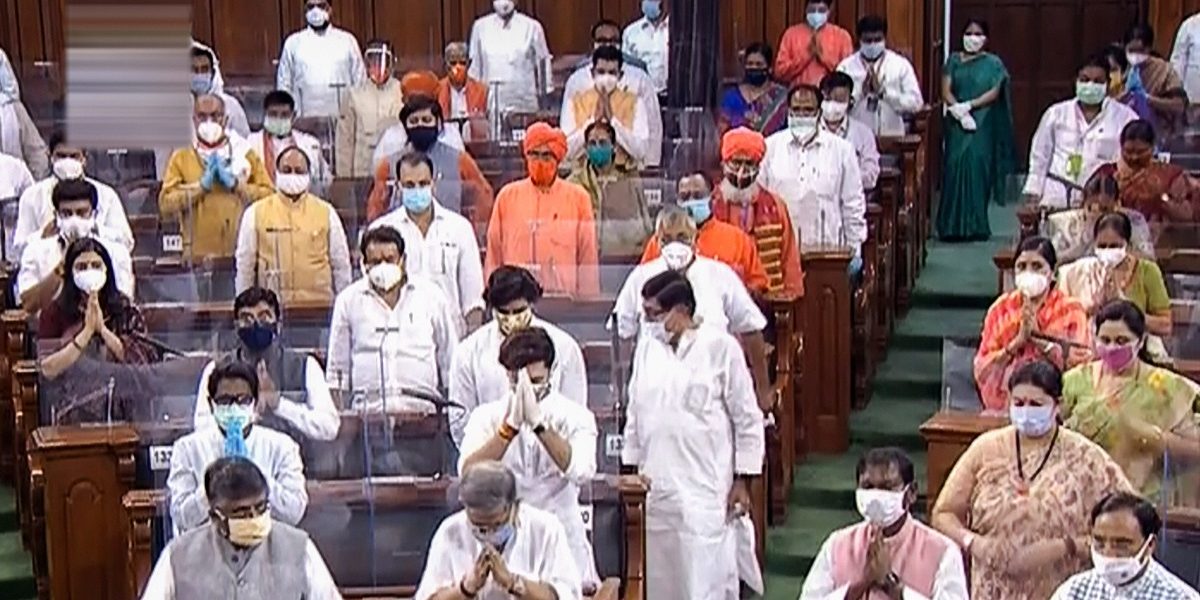 MPs pay tribute to ex-president Pranab Mukherjee and others who passed away this year, during the opening day of parliament's monsoon session at Parliament House in New Delhi, September 14, 2020. Photo: LSTV/screengrab via PTI

New Delhi: After a long delay due to the COVID-19 pandemic, the 18-day monsoon session of parliament began on Monday. The Lok Sabha proceedings began at 9 am under the new social distancing norms. The house, however, soon adjourned for an hour after offering tributes to former president Pranab Mukherjee, a former MP, and 13 former parliamentarians who passed away recently. The Rajya Sabha will sit from 3 pm.

During the session, for which several changes in procedures have also been made, parliament is expected to take up the India-China border issue, the situation arising out of the pandemic as also the naming of Communist Party of India (Marxist) leader Sitaram Yechury by the Delhi police in a supplementary chargesheet in the North East Delhi riots case.

The session is expected to see the opposition come together to oppose the Centre on several key issues. These parties have already announced they would be opposing four Bills, including three farm-related ones that are to replace ordinances, and demand that they be sent to the select committee of the Rajya Sabha.

The CPI(M) has also declared that it will oppose all 11 ordinances promulgated during the lockdown. Its MPs have moved notice for statutory resolutions opposing these ordinances and demanding their withdrawal in both houses of parliament.

The CPI(M) along with DMK has also given an adjournment motion notice over the ‘suicide of 12 teenage students due to NEET’.

The Congress would be raising the border standoff issue with China in a big way. Its MPs Adhir Ranjan Chowdhury and K. Suresh on Monday gave an adjournment motion notice in Lok Sabha seeking an immediate discussion on the issue of Chinese incursions in eastern Ladakh.

Meanwhile, Prime Minister Narendra Modi expressed the hope that during the session, MPs will speak in unison and express solidarity with the forces guarding the borders. He said the soldiers on the border with China have been bravely discharging their duty, despite the harsh hilly terrain and weather conditions. “I believe that all members of parliament will give an unequivocal message that the country stands with our soldiers,” he said.

Modi also spoke about the situation in which the session is being held. “Parliament session is beginning in distinct times. There is coronavirus and there is duty. The MPs chose the path to duty. I congratulate and express gratitude to them. This time, the Lok Sabha and Rajya Sabha will be held at different times during the day. It’ll be held on Saturday and Sunday too. All the MPs have accepted this.” 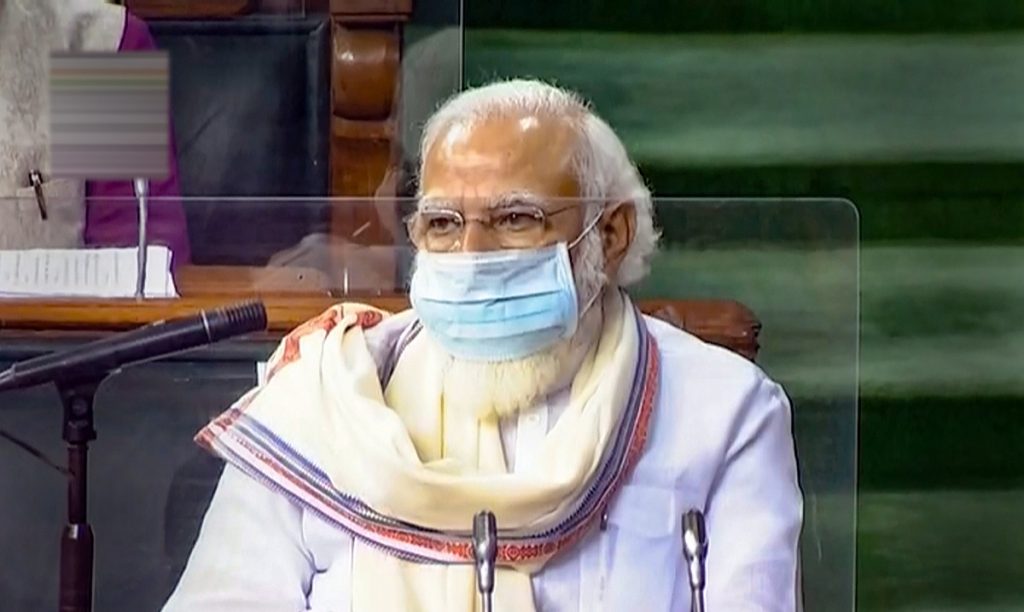 Reacting to the PM’s remarks, Congress leader Shashi Tharoor said: “The government is accountable to Parliament. When have they reported to us on talks between the defence and foreign ministers (of India & China)? The nation needs to be taken into confidence. The question of support for military is beyond debate; we are strongly with our Army.”

The session is also witnessing several firsts in terms of arrangements for COVID-19 prevention and procedural changes to provide for social distancing norms and reduce crowding.

The entry to parliament has been severely restricted this time. The entry, for the time being, has been barred for a large number of category of people who used to be allowed into parliament earlier. These include former MPs, MLCs, MLAs and personal secretaries, personal assistants, family members, personal guests and visitors, accompanying the sitting MPs.

In a controversial decision, which was opposed by several opposition leaders and constitutional experts, the Question Hour has also been dispensed with during this monsoon session. The reasoning given for this decision is that it required the presence of a large number of officials in the house and that would not have allowed proper social distancing.

Several parties criticised this decision, saying it was during Question Hour that MPs are able to hold the ministers accountable for the functioning of their ministries, since it is mandatory for them to reply to their queries, which are first submitted in writing, and then to also answer their supplementary questions orally, as permitted by the chair.

During the proceedings on Monday too, Congress’s Chowdhury raised the issue of changes with respect to Question Hour, saying: “The Question Hour is the essential of Parliament democracy. It is the soul of the House.  By removing it, the government is trying to stifle opposition views.”

For the session, the Zero Hour, during which members raise matters of public importance, will also be curtailed and Private Members’ Bills will also not be allowed. 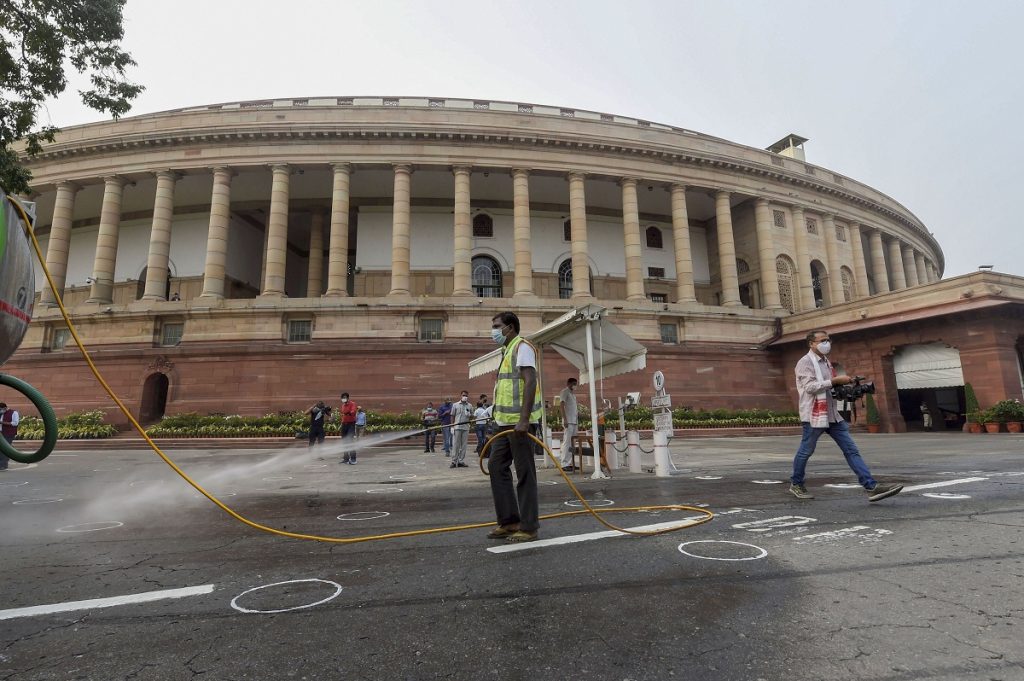 After the opposition accused the Centre of reducing parliament to a “notice board” through these restrictions, the parliamentary affairs minister Prahlad Joshi said the unstarred questions in which members get answers to their written queries will still be laid on the table of the house.

During the session, entry to only those ministers, MPs, officials, mediapersons and others would be allowed into parliament who have tested negative for COVID-19. They will have to undergo the test at least 72 hours before the start of the session.

The sitting plans have also been altered within the houses.