Parambir Singh, shunted out as police commissioner in the wake of the Antilia bomb scare case, accuses home minister Anil Deshmukh of running an extortion racket, while the latter plans to file for defamation over allegations he says have been made as an afterthought, to cover up Singh's own supposed failures. 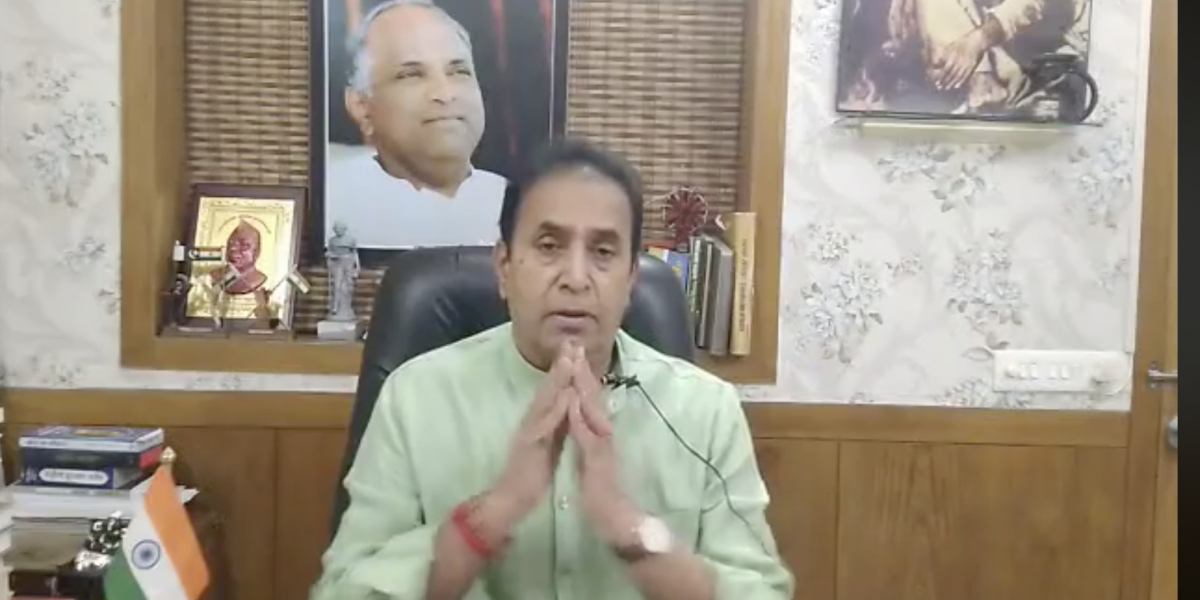 Singh, who was removed from the coveted Mumbai commissioner’s post soon after Waze’s arrest and sent to the Home Guards as its director general, trained his guns on Deshmukh in a letter to chief minister Uddhav Thackeray on Saturday.

However, the chief minister’s office raised questions about the “credibility” of the letter in question, and pointed out it had not been sent from Singh’s “official email id”. The CMO statement also said attempts are being made to get in touch with Singh.

In the letter, Singh has claimed that Deshmukh had been in touch with Waze and had directed him to “accumulate Rs. 100 crore a month”. “For achieving the aforesaid target, the Hon’ble Home Minsiter told Shri Vaze (sic) that there are about 1,750 bars, restaurants and other establishments in Mumbai and if a sum of Rs. 2-3 lakhs each was collected from each of them, a monthly collection of Rs. 40-50 crores was achievable. The Hon’ble Home Minister added that the rest of the collection could be made from other sources.”

Singh claims that at one of the briefing sessions in the wake of the Antilia incident that was held mid-March, he had pointed to several “misdeeds and malpractices” that Deskmukh has allegedly been involved in. Soon after the letter was made available to the media (curiously, first to the TimesNow channel), Deshmukh took to social media to rubbish the accusations levelled by Singh against him.

The former Commissioner of Police, Parambir Singh has made false allegations in order to save himself as the involvement of Sachin Waze in Mukesh Ambani & Mansukh Hiren’s case is becoming clearer from the investigation carried out so far & threads are leading to Mr. Singh as well

Singh’s letter is a crucial development for several reasons. One, he was police commissioner and Waze, a junior officer, is believed to have been directly reporting to him until his arrest. Also, the manner in which the investigation in the Antilia case is shaping up so far, several doubts have been raised about the senior police officer’s credibility and lapses in handling the investigation.

Alongside the bomb scare case, Waze is also accused of having played a role in the suspicious death of businessman Mansukh Hiren. Hiren’s car was allegedly used to plant the explosive substance a few metres away from Ambani’s residence. A few days after the Antilia incident, Hiren’s body was recovered from Kalva creek, near Thane.

Hiren’s wife and former chief minister Devendra Fadnavis have both alleged that Waze played a role in Hiren’s death. The investigation into Hiren’s death, handled by the state Anti-Terrorism Squad till March 20, has now been taken over by the NIA.

Waze, who was under suspension following his arrest in the encounter killing of a Parbhani-based techie, Khwaja Younus, was suddenly reinstated last year. The Maharashtra government had claimed that Waze and many other suspended officers were brought back following the rise of COVID-19 infections in the police force.

Similarly, when the state government decided to appoint Singh as the city commissioner in 2019, many had considered it to be a “wrong move”. The 1988-batch IPS officer, under the BJP government, had presided over the controversial investigation into the Elgar Parishad case. Before the NIA took over the case, the Pune police was investigating the case. In one of his press conferences, Singh, then the additional directorate general of police (ADGP), had read out letters purportedly establishing crucial links between the arrested human rights defenders and Maoists. The Bombay high court had come down heavily on Singh for his ill-timed press conference.

In his letter, Singh gives a detailed account of his alleged meeting with the home minister, his juniors’ —including Waze — meetings with Deshmukh and his personal assistant, one ‘Mr. Palande’ (Sanjeev Palande has been his PA for long) and the subsequent conversations that transpired between Singh and his subordinates.

In one of his many claims, Singh says: “Shri Sachin Vaze (sic) who was heading the Crime Intelligence Unit of the Crime Branch of the Mumbai Police, was called by Shri Anil Deshmukh, Hon’ble Home Minister, Maharashtra to his official residence Dyaneshwar several times in last few months and repeatedly instructed to assist in the collection of funds for the Hon’ble Home Minister.”

According to Singh, Waze had shared this with him and he was “shocked” and had been mulling over how to deal with the situation. Singh further claims that a few days after Deshmukh met Waze, two other police officials — ACP Sanjay Patil from the Social Service Branch and DCP (Raju) Bhujbal from the Enforcement Directorate — were summoned by the home minister. This meeting, Singh says, was to discuss hookah parlours in Mumbai.

Singh has also referred to the incident of the death by suicide of the MP from Dadra and Nagar Haveli, Mohan Delkar, in a hotel in South Mumbai. According to Singh, the case involved abetment to suicide and that Delkar’s suicide note had pointed to several persons back in his constituency; thus the case should have been originally investigated there. However, Singh claims that Deshmukh had insisted the police register a case of abetment to suicide in Mumbai and that he had allegedly resisted this idea.

“Due to my resistance, the Hon’ble Home Minister was unhappy with me as the political mileage desired to be derived from the registration of the abetment of suicide case in Mumbai in the death of Shri Mohan Delkar, Member of Parliament against senior officials of Dadra & Nagar Haveli was not being achieved,” Singh writes in his letter to the chief minister.

The Wire tried to contact Palande, Singh, Patil and Bhujbal for their comments but none of them were reachable. The story will be updated as and when they respond. Meanwhile, BJP leaders, including former chief minister and now the leader of opposition Devendra Fadnavis, have demanded Deshmukh’s resignation. Simultaneously, Congress leaders have stepped in to mitigate the damaged caused.

We demand detailed investigation by CentralGovt agencies into the very serious allegations against Maharashtra HomeMinister. If GoM disagrees,a Court monitored investigation be done. Looking at the evidence placed in this letter,HM should immediately resign or CM should sack him. pic.twitter.com/vAaTW7Fzek

Maharashtra Pradesh Congress Committee’s spokesperson Sachin Sawant said, “No sane person would indulge in such a conversation, more particularly after the Antilia incident.” If this conversation were to happen, it would have happened a year ago itself, Sawant added. He also claimed that what is playing out right now was already predicted by the BJP. “How?” he asks. “How was BJP already in the know of the extortion allegations made in the letter. If the Sushant Singh case could be registered in Bihar, why couldn’t Delkar’s suicide case be handled here?” he asked.

Singh says that his transfer from the Mumbai Commissionerate was “necessitated by administrative exigencies”. “I believe that the reason for the transfer noted by the Govt. in my file is to ensure a free and fair investigation in the Antilia incident,” he writes.

But in an interview to a Marathi daily on March 18, Deshmukh had accused the Mumbai police head of “serious lapses” in handling the investigations in the Antilia incident. Deshmukh had termed these lapses as “unpardonable” and claimed that Singh’s transfer was “not on administrative grounds”.

To this, Singh claims, “These statements are contrary to the record and seem to be for extraneous and vindictive reasons.” Towards the latter part of the letter, Singh mentions the purported message exchanges between him and his subordinate officers Patil and Bhujbal. Some alleged message exchanges are as follows:

Singh (March 16, 2021, 4:59 pm): “Patil how many bars and other establishments did HM sir and Palande mention to you when you had met them in Feb. And what was total expected collection they mentioned.”

Deshmukh, in a detailed media statement, has announced that he will be filing a defamation suit against Singh. “The claims made by Singh are baseless and made with an intention to cause harm to me and Mahavikas Agadhi government,” he wrote in his response. Knowing that Singh would be made to step down from the post of city police commissioner on March 17, Deshmukh claims that Singh staged a WhatsApp conversation with his close associates Patil and Bhujbal on March 16.

Deshmukh further claims that after his interview, given to Marathi daily Lokmat on March 17, Singh was sure that the evidence collected in the case so far was damning. So he tried to once again manufacture evidence on WhatsApp.

“It is a known fact in the police department that both Patil and Bhujbal are close confidantes of Singh. Moreover, Singh was directly involved in getting Waze reinstated into the department last year,” Deshmukh has alleged.

Deshmukh, while announcing that he is initiating defamation proceedings against Singh, questioned the motive behind releasing such a letter and more importantly at this stage. “Why did Singh wait until Waze was arrested?” the home minister asked. “As Singh claims that Waze had informed him about his meeting with me in February. Then why did he stay silent so long,” Deshmukh further added.