Opposition leaders insisted that the suspension order was against parliamentary laws since punishments cannot be carried forward into the following session. 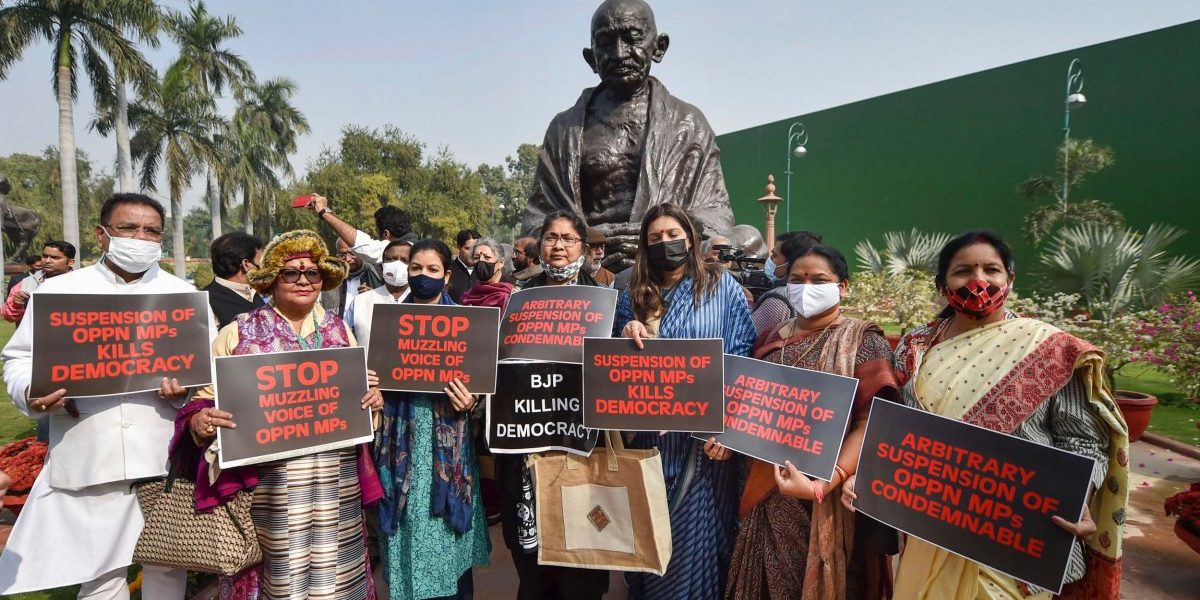 New Delhi: Opposition members staged a walkout from the Rajya Sabha on Monday over the suspension of 12 MPs from the ongoing winter session due to the violence that broke out on the last day of the monsoon session in August. They accused the government of strangulating the voice of the opposition through the action after chairman Venkaiah Naidu refused to revoke the suspension, saying the suspended members had shown “no remorse”.

Before the House assembled, leaders of 16 parties, barring the Trinamool Congress – which has not been attending meetings led by Congress Leader of Opposition Mallikarjun Kharge – met Naidu to demand revocation of the suspension order. The opposition leaders insisted that the suspension order, announced on Monday, the first day of the Winter Session, was against parliamentary laws since the punishments cannot be carried forward into the following session.

Despite the vociferous demand of the opposition members, no consensus was reached over the suspension issue at the meeting.

`Motion of suspension a violation of Rule 256’

Subsequently when the Upper House assembled at 11 am, Kharge again raised the demand for revocation of the suspension of the 12 MPs. He claimed that the action against the MPs – who included six from the Congress, two each from Trinamool Congress and Shiv Sena, and one each from CPI and CPM – was “selective” and in violation of the rules.

“I request you to revoke suspension of 12 opposition MPs… have been suspended selectively,” Kharge said, adding that “every Member should be allowed to make a Point of Order… Rule says Chairman has to take name of MP first and then a Question has to be made prior to suspension. Then a Motion for Suspension can be moved. This has to be on the day of the incident. In the present case, none of the MPs were named before the motion.”

Kharge also mentioned that the incident in question had taken place in the previous session. “We came to your office to request for revocation of the suspension of 12 MPs. The incident happened in the last Monsoon session. So, how can you take this decision now,” he said.

He added that “the moving of the motion, and its adoption is a gross violation of procedure regarding suspension of members, provided under Rule 256.”

However, Naidu refused to revoke the suspension, saying the MPs “haven’t expressed remorse”. He added: “Suspended MPs have not expressed remorse. I am not considering the appeal of Leader of Opposition (the Congress’ Mallikarjun Kharge). Suspension will not be revoked.”

Naidu said that the bitter experience of the last session continues to haunt most of the MPs and lamented that there was no apology for it. “The bitter experience of the last Monsoon Session still continues to haunt most of us. I was expecting and waiting for the leading lights of the House to take lead in expressing outrage over what happened in the last Session. Such assurance would have helped me in appropriately handling the matter but unfortunately it will not be,” he said.

At this the opposition members in the House protested strongly and then staged a walkout.

Meanwhile, some other leaders of the opposition have termed the action by the chairman to be “unwarranted and undemocratic”. Congress leader Abhishek Singhvi tweeted that the decision has helped the Centre numerically in the House. “By suspending 12 MPs from the Rajya Sabha, BJP has now gone ahead of the majority number. Can easily pass listed bills through the upper house now,” he wrote.

`MPs suspended so Centre could have brute majority in Rajya Sabha’

Congress MP Chhaya Verma, who was among those suspended by Naidu, too charged that the Centre wants a “brute majority” in the House. “This suspension is simply unfair and unjust. There were other members from other parties who created a ruckus but the chairman suspended me. PM Modi is doing just as he wishes since he enjoys a brute majority,” she told a news agency.

Meanwhile, giving out the government’s view on the issue, parliamentary affairs minister Pralhad Joshi said earlier today that the Centre was “forced” to suspend the MPs for “misbehaviour” but would revoke the suspension if they apologised. “The government was compelled to place this proposal of suspension before the House. If these 12 MPs apologise to the Speaker and the House for their misbehaviour even now, then the government is ready to consider their proposal positively with an open heart,” he said.

The opposition has, however, denied any need for an apology. While announcing that they would not go back to the House today, the members said they would be holding another meeting in Kharge’s office to decide on further action.

Leaders of various opposition parties also staged a protest at the statue of Mahatma Gandhi in the Parliament premises over the issue.