The MahaIT department has been mired in controversies for some time now, but the state has failed to take corrective measures. 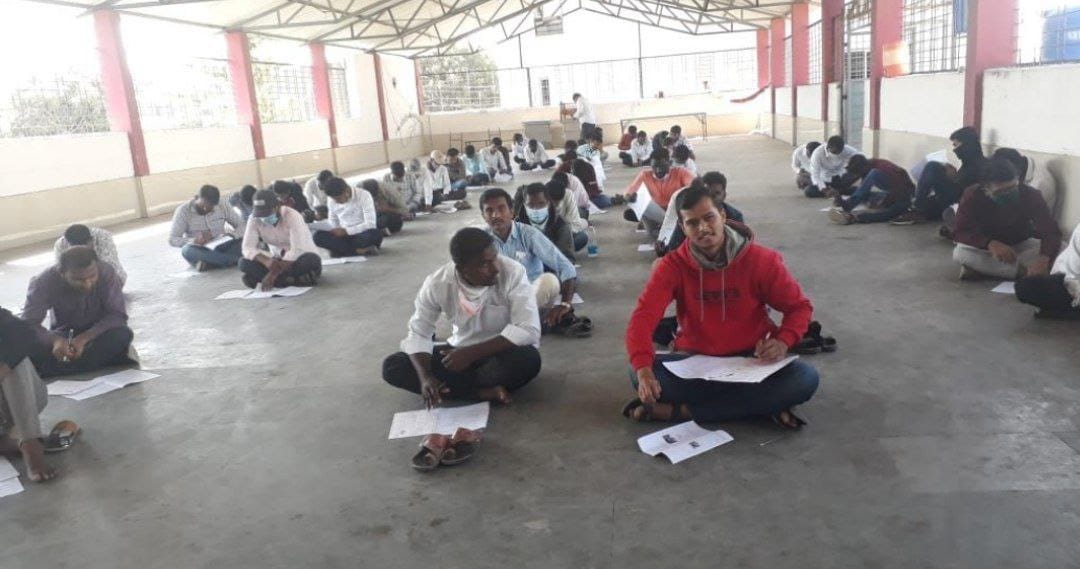 At some centres, candidates were made to sit on the floor. Photo: Special arrangement

Mumbai: On February 28, as aspirants for posts in the Maharashtra health department began to gather in thousands at Dhaneshwari Agri college at Deorai Tanda in Aurangabad district, the local Chikalthana police station received a specific input: “A candidate, equipped with sophisticated wireless earphones and scanning machines will soon be entering the exam centre.”

Within minutes, a team had reached the exam hall and apprehended the candidate right at the entrance. Until this time, the police team had assumed that it was yet another failed attempt by an overzealous student to cheat in the exam. But what emerged on his detention astounded the police team, says investigating officer Ashwini Kumbar.

The candidate, Kumbhar says, had worn a “delicate, micro-earphone” which could be easily missed. “Intricate wires were placed under his clothes and he had a micro scanner too,” Kumbhar explains. “The candidate, on receiving the question paper, was to scan it and send it to the control room, not too far away from there. The controllers were then to read the questions and promptly relay the right answer.” All this, she says, was made available on paying around Rs 10-15 lakh to the prime accused.

The candidate, on being apprehended, spilled the modus operandi and led the team to the main control room – a local study centre, close by. Three persons seated there with their laptops were immediately arrested. A few others had managed to escape. “But their gadgets were confiscated and we are in the process of establishing their identities too,” Kumbhar tells The Wire. In all, six persons – one candidate, the owner of the study centre and four others – were eventually taken into police custody. 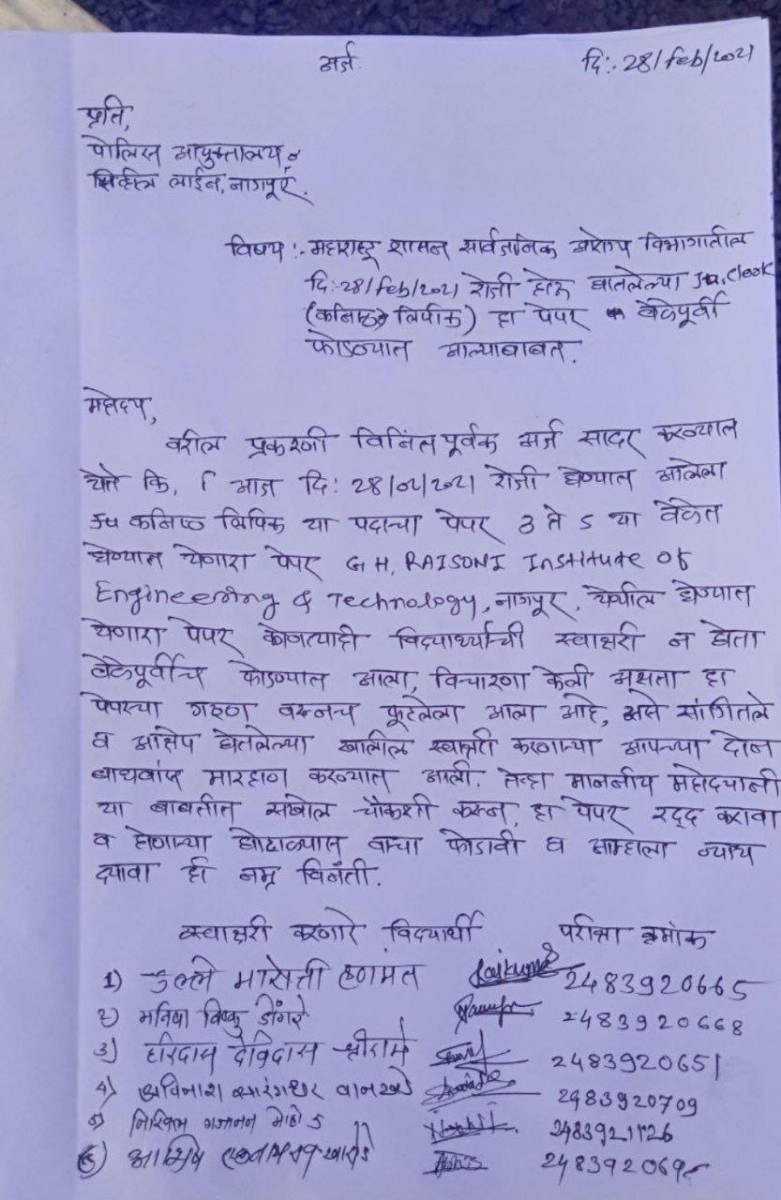 Several complaints were made with local police stations across Maharashtra. Photo: Special arrangement

What the Aurangabad police found is just the tip of the iceberg. At multiple centres, across all districts of Maharashtra, several cases of malpractice, mismanagement and mass cheating have been reported. Over 3.5 lakh candidates appeared for around 4,000 posts to be filled in class C and D in the health department. In several districts, candidates were shocked by the unpreparedness of the exam centres, expressed their discontent. In many places where candidates were found cheating through a well-established network, police complaints were registered.

This is not the first time that the Maharashtra Information Technology Corporation Limited or ‘MahaIT’– the nodal agency for recruitment for the Government of Maharashtra – has failed in conducting exams in a foolproof manner. The department has been mired in controversy, particularly from the time when Devendra Fadnavis was the state chief minister and his Man Friday, Kaustubh Dhavse, handled the department.

These exams are part of the administrative services governed by the General Administration Department (GAD). While in the past, Fadnavis had handled the GAD and had directly monitored the MahaBharti (mega recruitment) drive in the state, the portfolio is now with present chief minister Uddhav Thackeray. Both MahaIT and GAD have shirked responsibility. While GAD officials have accused MahaIT of mismanagement, the latter claims that GAD failed to issue a standard operating procedure (SOP) on time and that led to massive chaos on the ground.

In October last year, The Wire has published a detailed investigative article on the recruitment drive in the state, which by its complexity and extent, was comparable to the Madhya Pradesh Professional Examination Board, more commonly known as the Vyapam scam. What The Wire found in its investigation has been validated by both former Ahmednagar collector Rahul Dwivedi and a private audit firm, PricewaterhouseCoopers (PwC), engaged by the state in 2018 to conduct an audit on the recruitment drive.

As many as 25,000 positions were to be filled in the drive announced in 2019 – a crucial time for the BJP considering both general and state elections were carried out within a gap of a few months that year. A whopping 35 lakh aspirants – primarily graduates and those who passed class 10 – had applied for these positions. In 2017, the year when MahaIT had first conducted the exam, around 50 thousand candidates had applied and another three lakh candidates filled up application forms in 2018.

Soon after the story broke, the state revenue minister and senior Congress leader Balasaheb Thorat had informed the press that the government would conduct a preliminary probe into the allegations. MLA Rohit Pawar had demanded that the government should dig deeper and instead set up a Special Investigation Team (SIT) to probe the matter. The government, however, failed to act upon its own claims.

As an impact of the story, however, the earlier empanelled US-based IT company ‘UST Global’ and an Indian company ‘Arceus Infotech Private Limited’ were both sidelined and the IT department floated a new tender and got new companies on board.

The February 28 incident, however, shows that nothing really changed on the ground. Gajanan Chate, an aspirant who appeared for the health worker’s post’s exam conducted at Shamburaje college in Aurangabad, says the centre had made arrangement only for 1,000 candidates even when over 2,000 were to appear through the centre. “And that led to utter chaos at the centre. We were kept waiting outside close to 40 minutes after the exams had officially begun,” he says.

The question papers, he says, were not brought in a sealed envelope either. “Exam papers have to be brought in a sealed cover and only at the exam centre, the envelope can be opened. But here, the question papers were already out in the open,” Chate adds. Another candidate, Kiran Golhar, said that his centre at Ahmednagar was unmanned and anyone and everyone could enter and leave the exam centre as per their whims.

Candidates appearing for the ‘staff nurses’ post were shocked when they found out that the questions asked were for the fire department, and the paper had not a single question relevant for the nursing post they had applied for. “Along with maths, logic and general knowledge, 40 questions are dedicated for the posts you apply for. Instead of nursing-related questions, we were asked questions relating to fire drills and fire extinguishers,” Nilkanth Holambe said. A copy of the question paper is available with The Wire. 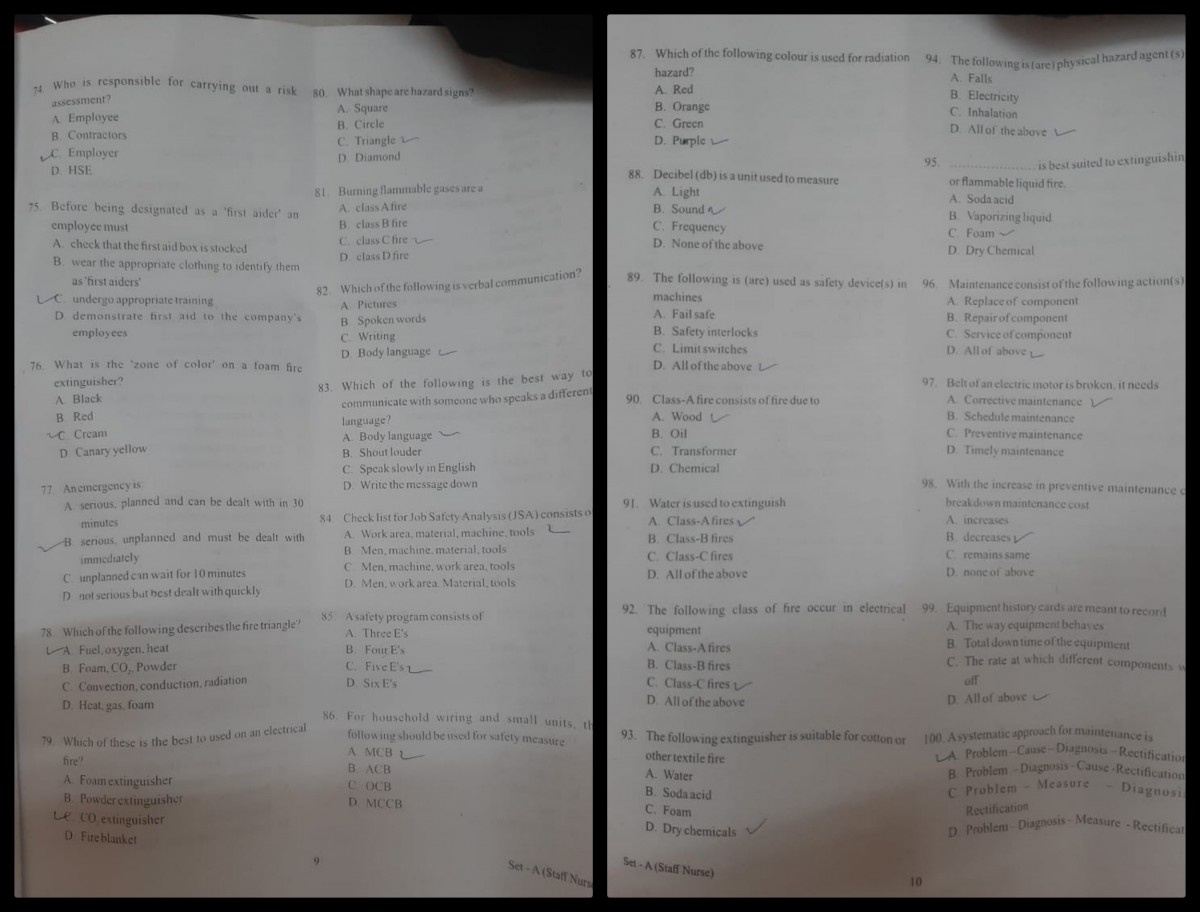 Similar experiences were shared by several candidates from across different centres. Soon after the exams on Sunday, social media was abuzz with videos and photographs from exam venues, where candidates can be seen haphazardly seated and copying from each other. At several centres, candidates on the completion of their exams headed straight to the nearby police station and lodged formal complaints. At some centres, like at G.H. Raisoni College of Engineering, candidates have alleged that they were manhandled by the staff when they raised questions over the open malpractice. A formal complaint has been made with the local Civil Line police.

The recruitment drive in the state has been delayed by several months. After 2017, this is the first time any exams have been conducted for the health department, says Nilesh Gaikwad, a BTech graduate from Buldhana district, one of the aspirants and also a member of the students’ collective ‘MPSC Samanvay Samiti’. Gaikwad tells The Wire that the aspirants had filled the application form in 2019 and had to wait for two years to write the exam. Several candidates, who had filled forms for multiple posts, were able to take only one exam at the end and at centres in far-away districts. Each of these forms costs around Rs 300-350 and on average, every candidate fills in six or seven forms each, Gaikwad says.

The delay in conducting these exams had pushed several aspirants to end their lives. In just November and December of 2020 alone, at least six separate incidents of aspirants dying by suicide have come to light.

On February 2, BJP leader and legislator Vinayak Mete raised the issue in the legislative council. He said that videographed evidence has been circulated across social media platforms. Deputy chief minister Ajit Pawar, in response, informed the assembly that several complaints have been received by the department and they are probing into it. He said, “By Monday (health minister) Rajesh Tope would be back to the assembly session and will take this question up. But as a deputy CM, I can assure you that if we find any truth in the allegations, we will promptly act upon it. We might even cancel the exams if the allegations are found to be true.” Aspirants, however, feel similar claims have been made by the government way too many times and that they don’t trust the state to take any corrective steps.