Asymptomatic workers coming from hotspots in other parts of the country want to be tested for their peace of mind. 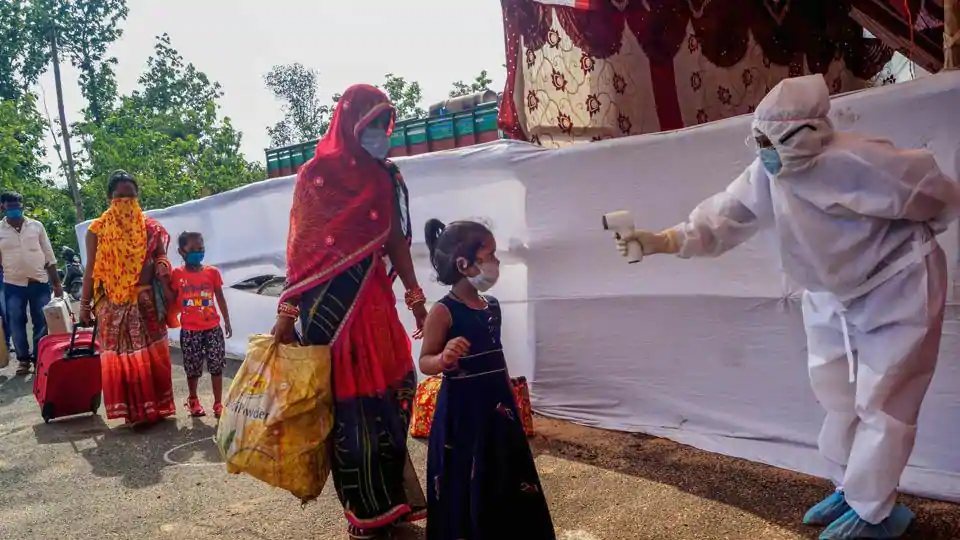 Bhubaneswar: On April 29, when the first batch of Odia migrant labourers reached the state from Surat, the city where thousands of them had been starving in the wake of coronavirus-induced lockdown, Odisha had only 125 positive cases of COVID-19.

However, the number of positive cases in the state has jumped to 1,948 within the span of one month, with around two lakh migrants returning home from different parts of the country. A bulk of the cases have been reported from Ganjam (404), Jajpur (259), Balasore (146), Khurda (131) and Bhadrak (113), which have received the maximum number of migrants. Odisha has also reported seven COVID-19 deaths so far.

As the state struggles to cope with the flood of home-bound migrants, the exponential increase in the number of COVID-19 positive cases is being directly linked to their arrival. In fact, chief minister Naveen Patnaik had himself dropped hints about a possible spike in COVID-19 cases when he had offered to bring back Odias stuck in various parts of the country because of the lockdown. But now it is more than obvious that even he did not expect this kind of a spurt in infections.

Containing the infection is turning out to be a Herculean task for the state government, even though it has set up 26 dedicated COVID-19 hospitals with a total of 4,470 beds. To add to this, there are seven dedicated COVID-19 health centres with 926 beds. The government has also readied 15,867 temporary medical centres in 6,798 panchayats where around seven lakh beds have been arranged to serve COVID-19 patients. Quarantine centres for Odias returning to the state from outside have been set up in each panchayat, with the government spending on food and basic care for those housed there.

Also read: The Lockdown Has Worsened the Plight of Odisha’s Indigenous Bonda Community

But there is no denying the enormity of the task. Defending the government’s decision to bring back Odia migrants, the state’s chief COVID-19 spokesperson Subroto Bagchi had said the state was duty-bound to do so on humanitarian grounds. “It is not only Odias who migrate. People from other states also come here for work. It is best to bring them (Odia migrants) back before the mahasankraman (peak of infections) takes place,” he had argued.

But with the waves of migrants have come the concomitant problems of monitoring their health and managing quarantine centres to everyone’s satisfaction. This seems to be putting extraordinary pressure on the government’s financial and human resources. There have been cases of protests over the quality of food in these centres at several places, while others have complained about lack of medical care.

With its resources stressed, the government has been forced to reduce the period of quarantine from 21 to 14 days, with seven days to be spent in institutional quarantine and seven days in isolation at home. District collectors, though, have been given special powers to take decisions according to the situation prevailing in their areas. For example, districts like Nayagarh still stick to the 14-day mandatory institutional quarantine norm and are advising those leaving the centres to go into home isolation for another seven days after that.

But people at some of the quarantine centres even in Nayagarh appear far from happy as far as their health care is concerned. Speaking to this correspondent over the phone, Manas Pradhan, who is lodged in a quarantine centre at Kasanda girls’ high school under Kasanda gram panchayat of the district, bitterly complained about authorities not paying any heed to the their demand for COVID-19 swab tests.

“I was quarantined here after returning to the state from Pune, where I worked in an automobile company. As the coronavirus epidemic spread in the city in a big way, 25 Odias working there contributed Rs 6,000 each to hire a bus and came back to our home state. There is no problem with food and other amenities at this centre but they are not conducting our swab tests despite us telling them that we have come from a red zone, where the epidemic was raging. We fear not only for ourselves but also for our family members if we are sent home without tests,” said Manas, who hails from Binodpada village under Brindabanpur gram panchayat of Nayagarh.

Santosh Kumar Jena, yet another Pune-returned person at the centre, said that the team of district officials who visit the centre from time to time give them medicines for problems like cough, cold and loose motions, they won’t conduct swab tests. “They say that there is no need to conduct these tests since we don’t have COVID-19 symptoms. Sometimes they try to scare us, saying that if we insist on tests we will be sent to COVID hospitals where we will suffer,” said Jena.

Kamdev Moharana, who is sharing the room with Manas and Santosh at the Kasanada centre after returning to the state from Indore, dittoed their health concerns. “There is no reason why asymptomatic people should not be tested because they can be potential carriers of the virus, especially if they are returning from coronavirus hotspots like Mumbai and Pune,” he said.

While Kasanda sarpanch Bijay Kumar Behera side-stepped the issue, saying that basic health concerns of the quarantined are being taken care of and they are being issued certificates after completing the mandatory 14-day period, Dr Baidyanath Nanda, who is leading the Ranpur block medical team, agreed that ideally even asymptomatic persons coming to the state from danger zones should be tested. “Earlier there was a government directive for testing even asymptomatic persons, but now only those with symptoms like cough and fever are being tested,” he said, adding that a paucity of kits or shortage of trained staff could be the reason for this change.

There have also been reports of protests by people at quarantine centre in other parts of the state over authorities’ refusal to conduct swab tests. Recently, around 80 migrant workers lodged at Radha Charan Das Girls’ High School at Baghasala in Gajapati district staged a dharna demanding tests. The stir was called off following an assurance by the administration that those showing symptoms of infection would be subjected to tests.

Though officials in Bhubaneswar chose not to comment on the issue, sources said that authorities in most of the districts maintain that swab tests for persons with no symptoms were not recommended and they could go back to their villages after the end of the quarantine period. “Sarpanches and others at the village level are also being sensitised to accept people returning from quarantine centres with or without tests,” said an official who did not wish to be quoted, as the issue has turned controversial.

However, people at quarantine centre like Manas and Santosh remain worried and argue that with asymptomatic persons accounting for a large number of COVID-19 positive cases, there was an urgent need to subject everyone coming from outside to swab tests. “At least this must be done in the case of those coming from states like Maharashtra where the incidence of coronavirus infection is very high. Otherwise they will be putting others at risk,” said Manas. One wonders if the authorities will listen to the appeals of the likes of him even as the number of positive cases continue to rise in the state every day.