According to the data, in most states there is a worsening in nutrition indicators such as childhood stunting, wasting and underweight. 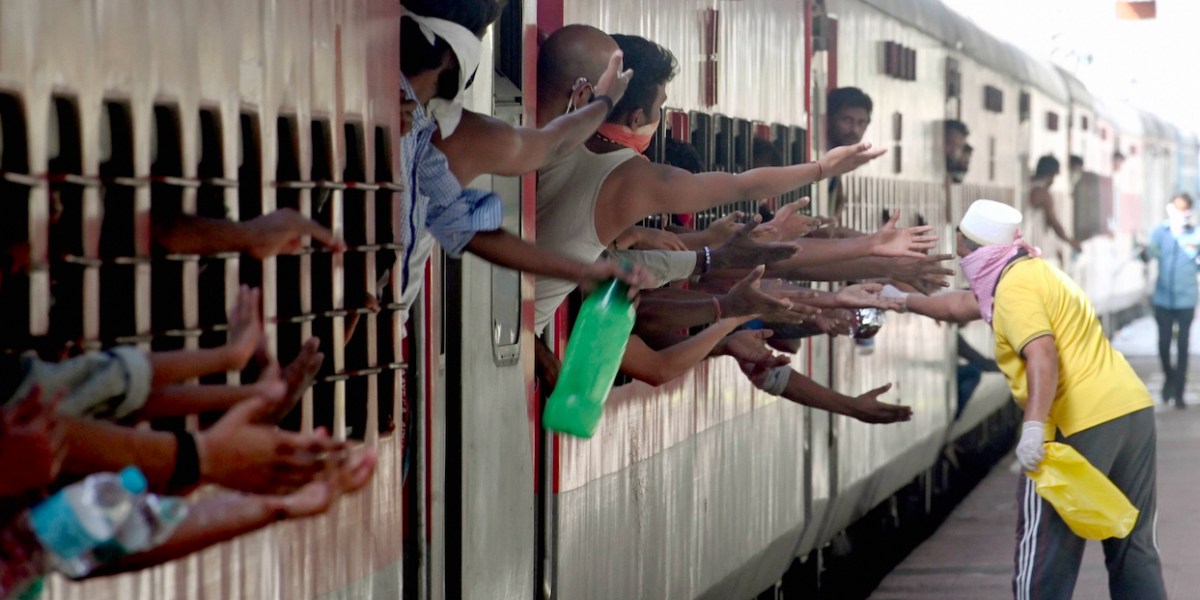 A volunteer distributes food packets and water bottles among migrants travelling in a train to reach their native places, during the ongoing COVID-19 lockdown, in Jabalpur, Wednesday, May 27, 2020. Photo: PTI

Partial results from the National Family Health Survey round 5 (NFHS-5) released last week draw attention to the crisis of malnutrition in the country. The factsheets that are available pertain to 17 states and five Union Territories – put together they roughly account for half of India’s population.

In fact, Andhra Pradesh and Sikkim are the only two states that see an improvement in all three of these anthropometric outcomes that reflect chronic and acute malnutrition among children. There is also an increase in the prevalence of anaemia among young children, adolescents, pregnant women, non-pregnant women and men in most of the states. Further, even overweight/obesity among men and women has gone up in most states.

While full data will give a better understanding, it cannot be denied that what we have so far is reason enough for serious concern as well as urgent action. In fact, given that the second phase of the NFHS-5 has been carried out after the pandemic and the lockdown, one can only expect that the situation may be even worse in the remaining states.

Also read: Food for All During Lockdown: State Governments Must Universalise PDS

Given the economic slowdown and stagnation in wages of the poor over the last few years, the NFHS-5 results are most likely an indication of the fact that people’s ability to access good quality nutrition has reduced. This was also reflected in the results of the consumption expenditure survey of the NSO (2017-18) which were leaked in the media but junked by the government citing data quality issues. 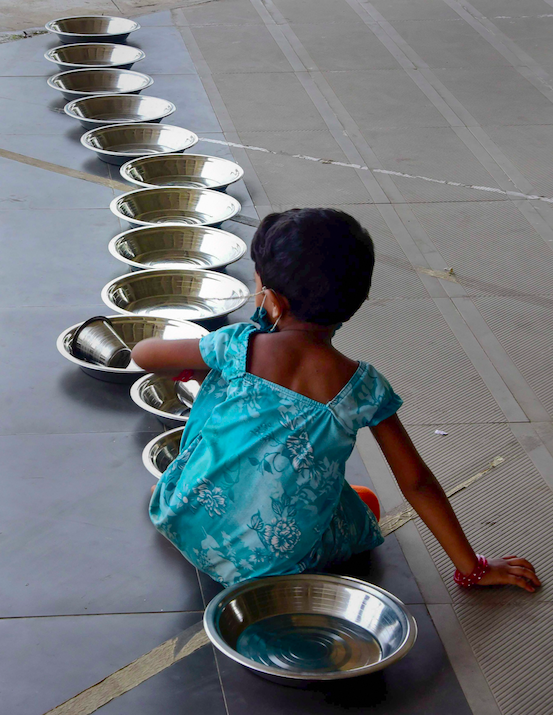 A child sits between a queue of plates placed by other people to reserve their spot, ahead of food distribution at a government-run shelter home at CIDCO Exhibition Center, Vashi in Navi Mumbai, Thursday, April 30, 2020. Photo: PTI

A recent paper by economist Jean Dreze and others also a finds a worrying stagnation in infant mortality decline in large parts of India in 2017 and 2018, which they say could mean that economic slowdown has had an adverse effect on child health. In such a context, strengthening the food supplementation programmes of the government through schemes such as the ICDS and the school meals was extremely important to arrest, at least to some extent, the negative impact such economic distress could have on child malnutrition. Unfortunately, what has been seen in the last few years is just the opposite.

The Prime Minister launched the ‘flagship’ programme, Poshan Abhiyaan (or National Nutrition Mission) in 2018 with the ambitious goal of achieving a Kuposhan Mukt Bharat. Although a proper evaluation would require more data, it is clear that the Poshan Abhiyaan has only managed to scratch the surface in so far as addressing malnutrition is concerned while most of the structural issues remain neglected.

Only 37% of funds released (Rs 1,576 crore out of  Rs 4,286 crore)by the government for Poshan Abhiyaan during the period between fiscal year 2017-18 and 2019-20 were spent until December 31, 2019. What the Poshan Abhiyaan has managed to do is to create a buzz around nutrition with an additional 36% of the funds being spent on behaviour change communication. Further, 36% of the total expenditure on Poshan Abhiyaan so far has been on the ICT-RTM (ICT – real-time monitoring) component as revealed by data that the Accountability Initiative got in response to an RTI.

Under this anganwadi workers can now enter data related to children’s growth and other indicators on smartphones and the data are available in real-time for monitoring. Considering the heavy burden of maintaining records on anganwadi workers, this is supposed to reduce the time they have to spend on filling registers as well as enable them to provide better services as the software aids them with reminders, appropriate nutrition and health messages and so on.

While such use of technology could surely help in improving the service delivery, they are not a replacement for either supportive supervision or community monitoring. Here, it must be mentioned that over 30% of supervisory positions in ICDS remain vacant. Further, the data collected are not even available in the public domain.

Moreover, as recent reports in the Hindu suggest, there are a number of issues related to internet connectivity and the server has also been down for over three months, which means that in this crucial time of the pandemic the governments or other stakeholders are actually not able to take advantage of this system of real-time monitoring.

This period has also not seen any expansion in the Integrated Child Development Services (ICDS) – which is the main platform through which nutrition interventions are delivered. A number of gaps in the ICDS, including poor infrastructure, insufficient funds, and therefore poor quality of Supplementary Nutrition Programme (SNP), low pay to anganwadi workers and helpers, need for additional anganwadi workers, converting anganwadi centres into creches that can give more attention to children under three years of age and so on, all have been raised by many, for a long time now.

However, reports have pointed out the budgetary allocations for ICDS and other nutrition schemes remain inadequate. Analysis by the Accountability Initiative shows that approved budgets for the SNP accounted for only 44% of the total funds required in 2019-20. Further in 21 states and UTs, the number of children receiving SNP was less than half the number of estimated number of beneficiaries with a rapid decline in number of SNP beneficiaries between March 2017 and June 2019.

In a nutshell, the last five years, on the one hand, have seen growing food insecurity among poor households, and on the other, inadequate investments in programmes such as ICDS that contribute to better nutrition. While there has been some improvement in other determinants of malnutrition, with some progress being seen in the NFHS-5 factsheets – there is an increase in access to toilets, immunisation coverage has gone up and some indicators of women’s empowerment such as women receiving more than 10 years of education or having a bank account also show an improvement – the benefits of these seem to have been negated by the neglect of basic household food security and access to diverse diets.

The period between 2005-06 to 2015-16 saw some improvement in the nutrition outcomes in the country with the overall prevalence of stunting reducing from 48% (NFHS-3) to 38.4% (NFHS-4). While this improvement was still slow, it meant a reversal from previous trends of stagnation.

This was a period that saw increase in real wages as well as an expansion in social security schemes of the government. It is clear that what is needed is a combination of both inclusive growth as well as concerted direct action towards improving the determinants of nutrition for women and children. In the last five years, we have slipped up on both counts.