In 'Digital India', Not Even 2.5% Panchayats Have Commercial Broadband

Modi's flagship BharatNet project is nowhere near its goal of functional internet for all. 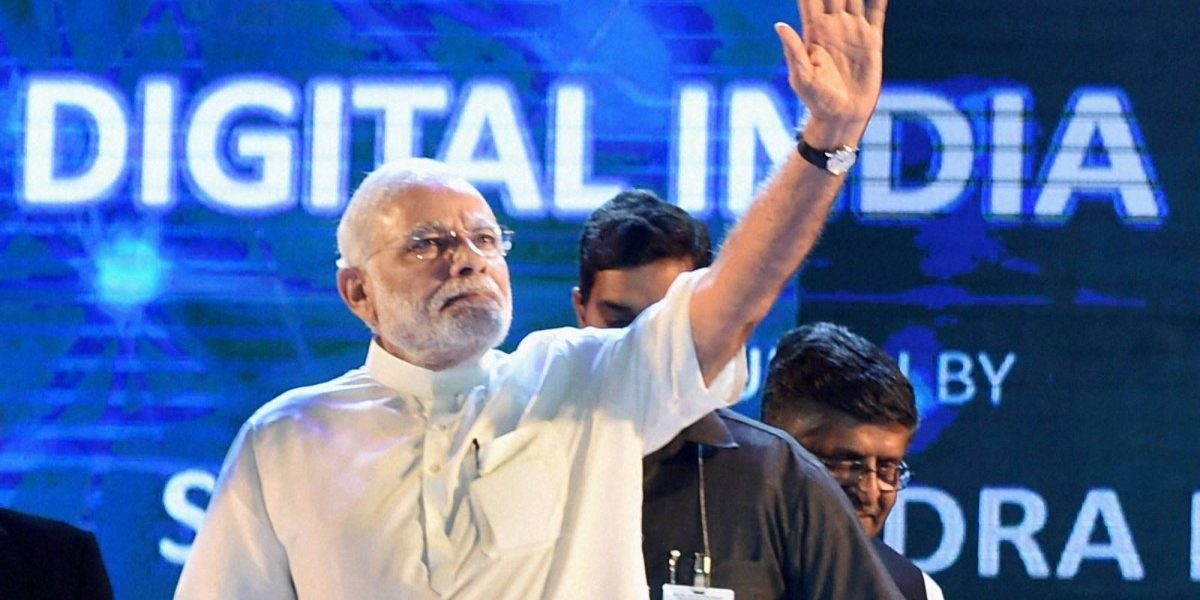 Over Rs 11,000 crore has been poured in so far, but the programme’s goal of functional internet seems a distant dream. According to latest internal government data seen by The Wire, less than 2.5% of India’s 2.5 lakh village panchayats have commercial broadband connections.

Under the Digital India scheme approved by the cabinet in August, 2014, the NDA-II government had set a target of providing broadband connections to all 2,50,000 village panchayats by December 2016.

“2,50,000 village panchayats would be covered under the National Optical Fibre Network (NOFN) by December 2016. Department of Telecommunications (DoT) is the nodal department for this project,” says the Digital India website.

Providing broadband to all village or gram panchayats is an integral part of the ‘Digital India’ programme. It is the first of the ‘nine pillars’ of the project.

In February 2018, the Centre announced that over 1.1 lakh village panchayats had been provided “optical fibre connectivity”.

However, only 5,010 village panchayats have actual commercial broadband connections as of October 31, 2018, according to internal DoT data accessed by The Wire.

Furthermore, DoT sources tell The Wire that only 660 MB of data is being consumed per connection that is provided as a result of BharatNet. A gram panchayat can have thousands of houses.

The average data use per connection also raises questions on whether those who have connectivity are using it to access the government’s digital health or education programmes.

The number of village panchayats with test connections is higher, at 56,700. However, these are free connections that are provided for only six months.

“Laying fibre and providing test connection has no meaning. It is the number of broadband connections used by the people and services through broadband that matters,” said K.N. Gupta, former executive director of the Centre for Development of Telematics (C-DOT).

Gupta likens it to laying water pipes for providing water to villages. “If you lay water pipes in villages but water doesn’t flow through them, the dry pipes are of no use to the people. Moreover, they get rusted.”

In a recent letter to the DoT, BSNL pointed out that the “optical fibre cable (under Bharatnet) is getting damaged….”, presumably due to the cable not being used.

As digital connectivity expert Osama Manzar noted earlier this year, while “cables have been laid… the end task of actually making Internet connectivity available, functional and distributed has been ignored”.

The task of providing high-speed broadband connections to rural India is a project that meandered under the UPA-II government as well.

When the Modi government took over, new funds were injected, and the project was also rechristened from the National Optical Fibre network (NOFN) to BharatNet.

Embarrassment for the NDA-II government?

As billions of dollars have been invested (more than Rs 11,000 crore) with few tangible results, even the Prime Minister’s Office (PMO) has become jittery, according to people with knowledge of the matter.

“This has the potential of becoming a big scam as taxpayer money has gone down the drain,” said Gupta.

Indeed, in the telecom industry circles, it has become clear that the BharatNet project has become embarrassing to a government that has focused on last-mile implementation.

In his first Independence Day speech in 2014, Modi eloquently explained the significance of Digital India.

“You can imagine what a quality education the children in villages will get, if all the villages of India are connected with broadband connectivity and if we are able to give long distance education to the schools in every remote corner of the villages,” the Prime Minister said. “If we create a network of telemedicine in the places where there is a shortage of doctors, we can have a clear guideline of the way in which health facilities have to be provided to the poor people living in those areas.”

What is the USOF doing?

At the heart of the implementation of BharatNet is the Universal Service Obligation Fund (USOF) – a government-controlled fund that is supposed to be used build rural connectivity infrastructure.

One of the reasons the government brought back Aruna Sundararajan as secretary in the telecom ministry in 2017 was because she performed well as administrator of the USOF back in 2014.

The projects she initiated four years ago are the only ones running successfully, according to DoT sources.

However, sources say that Sundararajan may now have her hands tied, as a handful of USOF officials are holding back major projects. According to one source, a few officials are deliberately placing restrictive conditions in tenders so that not even a single bidder comes forward.

“The easiest thing is to keep on seeking clarifications so that the project is delayed,” said a former member (technology) of the telecom commission.

One senior USOF official reportedly flaunts his connections to the Rashtriya Swayamsevak Sangh. Because of that, not even the PMO is questioning the USOF for its slow progress.

Another crucial aspect of ‘Digital India’ is mobile connectivity.

How well have the government’s mobile connectivity projects, which all fall under the USOF, done over the last four years? A cursory review reveals inadequate progress.

Also read: Modi’s Quest for Digital India Made Staying off the Grid Harder Than Ever in 2017

LWE 2 & Meghalaya: USOF has been delaying Phase II of the LWE (left-wing extremist) project for setting up 6,245 towers in LWE-affected areas and Meghalaya. The project is stuck as there is a big price difference between the estimates given by USOF and BSNL. As per USOF’s estimates, the cost would be Rs 11,241 crore, while BSNL has offered to do it in Rs 5,312 crore. The BSNL proposal was approved by a high-level technical committee under the-then member (technology) Prabhash Singh. Now, sources say, USOF is in a fix and is delaying it on one pretext or the other.

North East 1: The cabinet approved 2,817 mobile towers for the North East region in September, 2014. The project cost is Rs 2,258 crore. The project has been a non-starter, with USOF officials repeatedly imposing new conditions even after the tender was opened up. Once BSNL accepted these conditions, USOF officials declined to pay to BSNL for starting the project.

North East 2: The cabinet approved the projects for setting up 1001 mobile towers in NE region in September, 2014. Project cost is Rs 826 crore. It is not yet operational.

Aspirational Villages: There are 4,000 villages to be covered under this project. Most of these villages are in LWE areas. This project is a non-starter.

Uncovered Villages: About 20,000 villages are to be covered under this project. This project is also a non-starter.