Did Modi Mislead Parliament on the Number of Fake Ration Cards that Aadhaar Had Exposed?

There is no official data to back up the prime minister's claim that the use of "Aadhaar and technology" had led to the discovery of nearly 4 crore bogus ration cards. 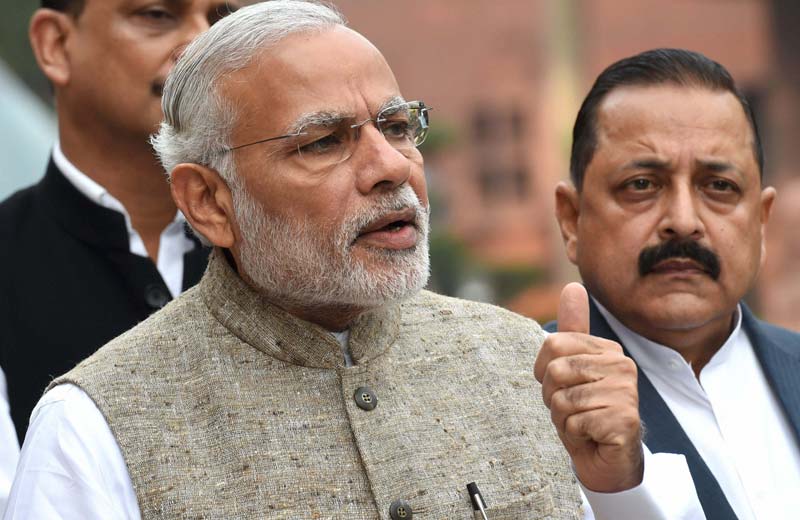 New Delhi: Nobody in the Narendra Modi government seems to know where the prime minister got the data on the basis of which he told the Lok Sabha that the use of technology and Aadhaar led to the discovery of 3.95 crore bogus ration cards (from 1:19 onwards in the video below), Right to Information Act activist Anjali Bharadwaj on Tuesday claimed at a press conference organised to “expose the false claims of the government about the benefits of Aadhaar”.

While Bharadwaj spoke about how Aadhaar has been cited to deprive crores of citizens of their right to food, other activists who participated in the meeting highlighted how the identity number has become a tool in the hands of the Centre as well as the state governments to reduce their expenditure on social welfare and to exclude people at will and on whims from their entitlement to pension, job cards under the Mahatma Gandhi National Rural Employment Guarantee Act (MGNREGA) rations and even mid-day meals.

During the recently concluded hearings on privacy in the Supreme Court, the activists – who were drawn from Satark Nagrik Sangathan (SNS), Delhi Rozi Roti Adhikar Abhiyan, Mazdoor Kisan Shakti Sangathan (MKSS) and the Right to Food Campaign – said that while the government made tall claims about Aadhaar ensuring food security for millions of people, the “experience on the ground and information accessed under the RTI Act shows that such claims are not backed by evidence”.

Bharadwaj also noted that a “corrected” statement was put up  recently, which now pegs the figure of bogus ration card holders quoted by the prime minister at 2.33 crores – a long way off from the 3.95 crore or nearly 4 crore he had claimed in the house. Incidentally, in his February 7, 2017 statement in the Lok Sabha, Modi had said that “main sadan main jab bolta hoon to zimmaidari ke saath bolta hoon (when I speak in the house, I do so with a sense of responsibility)”. He had also cited a Rs 14,000 crore saving from the removal of bogus card holders.

Within a month of Modi speaking about how Aadhaar had helped check flaws in the public distribution system, Bharadwaj, who has worked in the field of food rights for a long time, filed a plea under the RTI Act. She said since no details pertaining to the 3.95 crore ration cards in question was available online,  she filed an RTI application with the PMO on March 7 seeking state-wise numbers and details of bogus ration cards, including the ration card number, the name and address of ration the cardholder.

Data on department site not related to Modi’s statement

Bharadwaj said while a file titled “deletion of bogus ration cards by states/UTs” was available on the department website, and it did possess a “statement showing the number of bogus/ineligible rations cards deleted by the state/UT governments with effect from July 2006 onwards” and was last “updated on February 16, 2016”, it did not relate to the statement that the prime minister made, since it did not state if cards were found to be bogus due to technology or Aadhaar.

Also, she said, the prime minister was referring to two-and-a-half years of rule under him. “Further,” Bharadwaj added, “the figures provided in the file did not match with the figures stated by Modi.”

People losing jobs because of Aadhaar

Economist and social scientist Reetika Khera talked about how government officials have stated that one crore fake job cards had been found during the process of cleaning up by seeding with Aadhaar whereas RTI applications filed by Jean Dreze had exposed that so-called “fake” and “duplicate” job cards accounted for less than 13% of all deletions in 2016-7 which numbered 94 lakh.

Other deletions, she said, were on account of death of people, change in address, mistakes on job cards and people expressing their desire to surrender them. “However, a press note was issued by the government as if these deletions would not have been possible but for Aadhaar,” she said.

Khera, while giving examples of Jharkhand, insisted that only about 20-30% ration cards have been seeded with Aadhaar. She said on closer scrutiny a lot of people were found ineligible under the National Food Security Act because the old cards had been junked and new ones issued. It was also found that faulty point of sale (PoS) machines were responsible for about 15% of all cardholders not managing to get any rations as they were faulty and could not read their fingerprints. Even the 85% who somehow managed to get rations, did so after several visits which increased their cost of procurement.

Moreover, she claimed that the concept of ‘katauti’ or the ration dealer taking a cut in the supplies continued more or less as before.

Denying that activists like her were anti-technology, Khera insisted that they were all for it but wanted safeguards to be built-in properly so that people were not deprived of their rights. “Aadhaar by itself has done nothing to curb leakages, smart card technology was good enough for that,” she said, adding that the Centre would do better to loosen its purse-strings to increase its dole out of pension from Rs 200 per month at present.

Nikhil Dey of MKSS added that in Rajasthan 10 lakh people had been removed from the pension list through Aadhaar linkage. “While 50 lakh people were getting pension earlier, it has come down to 40 lakh now. As a consequence, many elderly have died or are living in abject poverty.”

In Rajasthan, the ‘dead’ come alive

Dey said when asked for the details of these deletions, the Rajasthan government said 2 lakh were due to deaths, 2.5 lakh due to duplication and the remaining due to other reasons ranging from address change or name not found. But, he alleged, that these figures were fudged. “In my village of the 11 identified dead, 9 are still alive.”

Similarly, he said, many disability pensioners had also been declared dead in the state – and all this only to save money.

When it came to rations, he said since September 2016, when Aadhaar biometric authentication was made mandatory in Rajasthan, over 25% of ration card holders – or 25 lakh families – have been unable to draw their rations.

‘Why no FIRs if so many bogus cards, pensions?’

Dey also questioned why no FIRs had been registered if so many bogus card holders or pensioners were found. He said that Aadhaar linkage had given birth to a new set of middlemen. “The ration dealers now decide which card holder remains in the system.”

“Similarly, the poor have now been exposed to the guile of the banking correspondents who are sent to deliver the pension money. We know how the gullible middle class is being targeted by fraudsters, but have no idea how these bankers with scanner devices are using the biometrics of unsuspecting account holders,” Dey said.

‘No mid-day meal for children without Aadhaar’

Right to Food campaign activist Dipa Sinha accused the government of making Aadhaar mandatory for all schemes without putting in any proper thought. Speaking about the recent notification vis-à-vis mid-day meals, she asked, “Will they not serve these meals to children who do not possess Aadhaar?”

Sinha said the move was also illogical as even the Unique Identification Authority had acknowledged that the biometrics of children change till the age of 15.

She said that the decision had been taken despite there being no data or basis for “attendance inflation”.

“We are looking for ghosts as if that is the problem. Ideally we should be focussing on providing more nutritious food to the children since in many places they are still served highly diluted pulses and milk and in others they are denied access to eggs.”

Amrita Johri of SNS accused state governments of suppressing data about the failure of Aadhaar enabled biometric authentication. “In Delhi, a pilot project under which Aadhaar-linked PoS devices were used in 42 shops had revealed problems regarding connectivity and difficulty in authenticating biometrics. And yet, the Delhi government is reportedly pushing through with universalising the P0S devices in all ration shops in Delhi.”

No rations even after Aadhaar

A number of residents of slum clusters as well as the homeless testified at the press conference that they were unable to access rations due to Aadhaar being mandatory. In some cases, after they managed to procure their Aadhaar cards, they were told that they would still not get rations as the quota of cards has been exhausted.