Modi attempted a response to the charge most repeated against his government – that the Centre had abandoned states to compete against each other for vaccines – by saying that this is what the states had wanted. 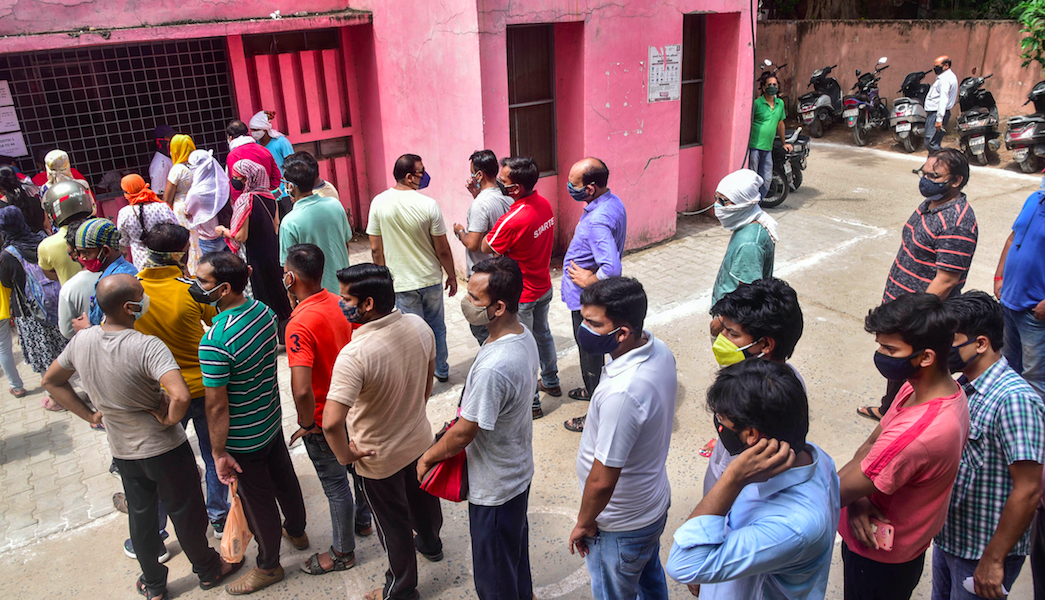 Representative image of people waiting to receive the first shot of COVID-19 vaccine in Varanasi on May 26, 2021. Photo: PTI

New Delhi: Prime Minister Narendra Modi on Monday, June 7, said that vaccine doses for everyone above 18 years will be provided free of cost by the Centre, removing his own government’s policy that state governments would have to procure vaccines directly from manufacturers for the 18-45 age group.

On April 19, the Centre had announced that from May 1, it will procure 50% of vaccines for distribution for free vaccination of those above 45 years. For the rest, state governments and private players would have to buy from the manufacturers themselves.

This move had garnered pitched criticism, most recently from the Supreme Court which had called the policy “arbitrary and irrational”.

Speaking in Hindi, Modi, in a televised address on Monday, attempted a response to the charge most repeated against his government – that the Centre had abandoned states to compete against each other for vaccines – by saying that this is what the states had wanted, apparently. Narendra Modi during his address on Monday.

By “25% of the work” Modi was referring to the breakdown of vaccine procurement earlier announced by his government, under which the Centre would acquire 50% of the vaccines manufactured, states would purchase 25% and the remaining 25% would be left for private players. This naturally does not directly mean that state governments would only be doing “25%” of vaccine-related work.

“Soon, the states began saying that the previous system was better. The ones who were asking for states to take up vaccination changed their stance,” he alleged.

Modi also said that the decision to leave purchase of vaccines for a section of the population to state governments was spurred by criticism of the Centre’s “one fits all” method of working.

Modi also said, “A section of the media took up the issue of vaccination as a campaign” – seemingly taking exception to news reports that pointed to loopholes in Centre’s vaccine policy.

The government will, in the next two weeks, introduce new guidelines before beginning, on June 21, free vaccination for all.

“No state will have to spend any money for vaccines,” Modi said.

There has been no response yet from Serum Institute of India and Bharat Biotech, India’s two vaccine manufacturers, on Modi’s announcement.

Both companies were selling vaccines to state governments at a price much higher than to the Centre. While SII sold Covishield at Rs 300, Covaxin was being sold at Rs 600 to states.

Modi also announced that the whole world is “interested in CoWIN, and many countries are looking to implement the technology in it.” The portal has emerged as one of the rallying points of frustration and disappointment in India’s vaccination policy, with very few managing to book shots on it.

In a nearly 30-minute speech, Modi credited his rule for bringing more than 90% of India under vaccine coverage, saying that earlier the extent was 60%.

“When our scientists were doing research on the vaccines, we had begun our logistical planning. When there were very few cases last year, we had formed the task force. Vaccine makers were helped with funds and clearances, the government helped them all through,” Modi said about the COVID-19 vaccination drive.

Three more vaccine trials are in advance stages, he said, in addition to two trials for kids’ vaccines.

“Research is also on for a nasal vaccine, to be sprayed through the nose. If this is successful, India’s vaccine drive will be faster,” he said.