'After about 15 minutes, our turn came. I pulled out my phone, with the result ready for inspection. The inspector did not bother to even glance at the screen and simply waved us to move on.' 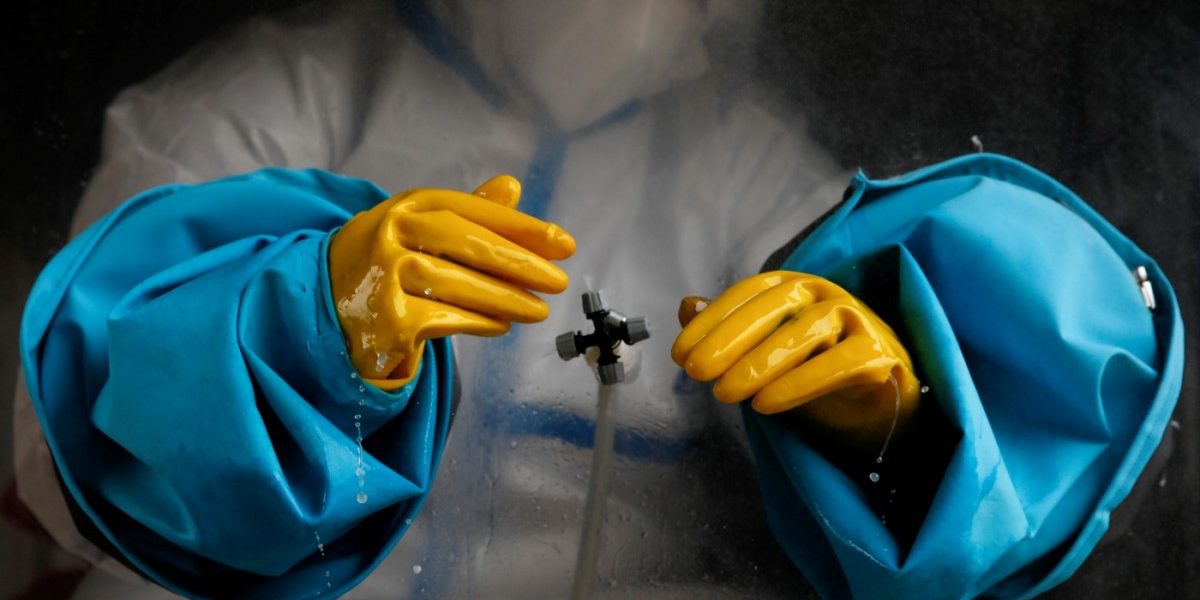 Representative: A health worker in PPE sanitises his gloves before taking a PCR test from a mobile swab collection vehicle, Kathmandu, May 19, 2021. Photo: Reuters/Navesh Chitrakar

Last week, I paid a bribe for the first time in my 60-plus years of life. I paid a sum of Rs 500 to get a fake negative PCR result for COVID-19.

After it was all done, I was surprised at how calm I was. I have always prided myself for never ever greasing a palm to get anything done. And yet, I felt no remorse, no twinge of conscience at what I had just done. On the contrary, I felt that the chaotic, money-grubbing and utterly opaque system that we have put in place in the name of COVID-19 prevention and control deserved the contempt I was buying with my bribe.

The smooth efficiency of the ‘test’ left me dumbfounded. All I had to do was to give my name and Aadhaar number to the intermediary, and in less than five minutes I had a very official looking ‘Medical Laboratory Report’ declaring me to be virus-free in my WhatsApp inbox. The “laboratory report” bore the insignia of Krsna Diagnostics, a prominent diagnostic laboratory with branches all over the country, with “Achievement Awards” oozing out of its website and with an uplifting slogan of “Let’s Do Good.”

But to be fair to this “world-class,” do-gooding laboratory – most likely its documentation is being forged by unscrupulous touts – the rot that led me to it began the moment I landed at the Indira Gandhi International Airport in New Delhi from the United States early in July. Every link in the chain, beginning with the Government of India’s own travel guidelines, failed and failed spectacularly. Obtaining a fake result was the only option I was left with.

Before setting out for Delhi, I did everything that I was asked to do. I got a PCR test for COVID-19 done within 72 hours of my date of departure, dutifully uploaded the test results on the self-declaration form on Air Suvidha, printed out a copy of the Government of India’s acknowledgement of my uploaded information. I landed in New Delhi confident that I would have the green light.

Alas, the self-declaration form turned out to be worthless. No one asked for it, no one looked at it. Instead, we were herded into a hall, made to stand in a long line for another test. No explanation was forthcoming, except “upar se order hain” (“these are orders from the top”). If no one was going to accept the pre-flight results, why make such a song and dance about it?

After much grousing and jostling on the weary passengers’ part, samples were taken for a fee. I was handed a very official looking piece of paper from Genestrings, the company doing the testing. Test results were promised within 8-12 hours. The only saving grace was that we were not required to wait for the results at the airport. We were free to leave.

The promised results did show up the next day. I thought that the system did work in its own slipshod and lumbering manner. Once I got over the tiredness and the jet lag, I even forgot the hassle of the queue at the airport.

A week after landing in Delhi, I was back at the airport for a domestic flight to Pune. All my previous tests were stale by now. I found myself back at the good old Genestrings testing facility. By now I knew the routine: pay the fees, have them swab my mouth and nose, get the impressive official-looking piece of paper and off you go.

And off I did go to Pune. I was worried that they may require me to wait at Pune airport till the results came in. But no, I was free to leave. And I left.

But this time, the results did not show up. Not the next day, nor the following day.

The problem was that this time, I needed these results so I could cross into Karnataka from Maharashtra on the road journey I was taking from Pune to Bangalore. I was worried that I would be stopped at the border without a negative test result.

Also read: After COVID-19, India Had to Test More – and Struggled to

I don’t know what the game plan was, for transparency is not a virtue much valued in this land of ours. Were test results made available only to international travellers? Was the whole set up meant to impress foreigners, while domestic travellers were left high and dry? Or was I not contacted because my test results were negative? Were they only contacting those with positive results? Or was the whole thing a money-making charade? I will never know.

That is when my very resourceful taxi driver set my mind at ease. He told me that he can get me a negative test result in minutes – for a small fee, of course. Well, I gladly paid the fee, without a twinge of conscience, for I was done with waiting, done with trying to get any information out of the system. As promised, I had a negative result in my inbox within minutes of this shady transaction.

Apparently, there is a big business in obtaining fake results for travellers. My driver told me that he routinely arranges for negative results for passengers he picks up from the Pune airport. I am sure that my driver is not the only one providing this service. And I am sure that travellers are not the only ones requiring a negative COVID-19 test to go on with their lives. The opportunity to make a buck in the market for fake tests is endless. No wonder the country is left flailing when the viral waves strike.

But this is not the end of the story. The crowning irony was yet to come.

Armed with my fake result, I set out from Pune to Bangalore. We were duly stopped at the Karnataka border. After about 15 minutes, our turn came. I pulled out my phone, with the result ready for inspection. The inspector did not bother to even glance at the screen and simply waved us to move on.

I did not know whether to laugh or to cry. Why put up a show? Why make ordinary folks jump through the hoops? What was the point?

But I was not going to argue.

We just moved on.

Meera Nanda is a historian of science.

Note: This article was edited at 4:36 pm on July 27, 2021, to emphasise that the fake report bearing the logo of Krsna Diagnostics was the handiwork of some other actors.