A report points at how a large number of Muslims feel they are implicated in terrorism cases, Dalits for petty crimes, and Adivasis for being Maoists. 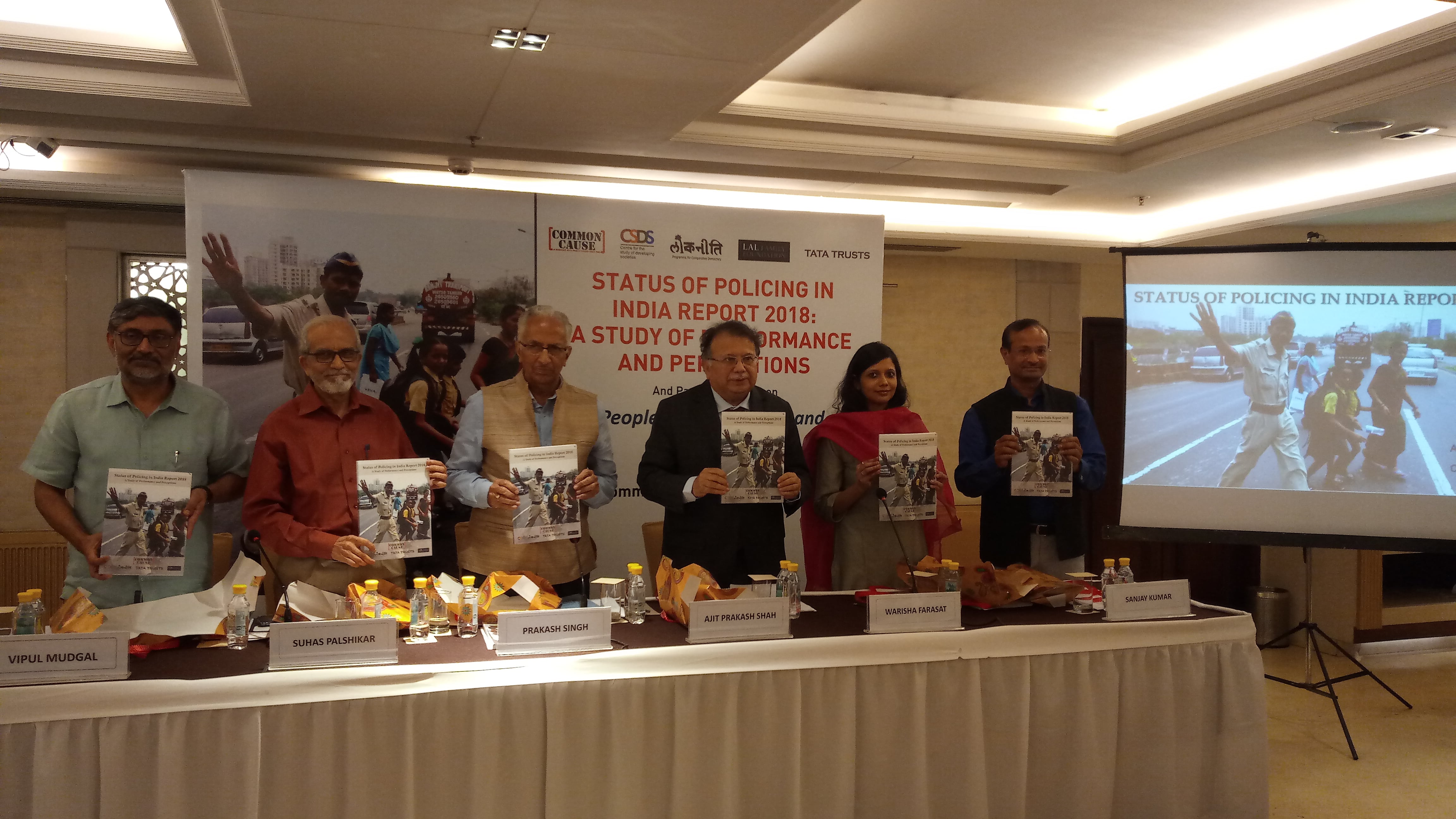 Muslim representation in the police force remains abysmally low whereas the community continues to have a disproportionately high representation in prisons, a report brought out by Common Cause and the Lokniti-Programme for Comparative Democracy at the Centre for the Study of Developing Societies (CSDS) has revealed. The study also noted that there was a high perception among Muslims that they were implicated in terrorism-related cases, just as Scheduled Tribes or Adivasis believe that they are implicated as Maoists, and Dalits or Scheduled Castes believe that they are implicated in petty crimes.

“Muslim representation in police, calculated in proportion to their population in the states and at the all-India level, is constantly less than half of the size of their population in India,” the report said, adding that “An even more distressing fact is that the data on Muslim representation in police – provided under Crime in India, NCRB until 2013 – has since been discontinued. The absence of information on this crucial aspect of diversity further clouds the possibilities of improvement in this aspect of policing.”

On how the minorities, and in particular Muslims, remained vulnerable, the report said: “Several studies in different states have been conducted on the disproportionate representation of minorities and vulnerable communities in the prisons. This has been found to be so particularly in the case of Muslims. When coupled with poor conviction rates and incidents of false implication, as recognised by courts, this points to a deeper problem of biases within the structure leading to hyper-incarceration of a particular section of the society.”

Taking the percentage of SC, ST and Muslim prisoners as a proportion to their respective populations in the state as a five-year average, the report further noted that “in case of SCs, only four states (West Bengal, Uttarakhand, Punjab and Karnataka) out of the selected 22 have SC prisoners in proportion to or less than their population in the State; in case of STs, this number is three (Himachal Pradesh, Madhya Pradesh, Nagaland), and in case of Muslims, all of the 22 states have a higher proportion of Muslim prisoners than the Muslim population in the State.”

It added that “the differences are as glaring as more than seven times the Muslim population in Nagaland in 2014, almost six times the population of STs in Uttar Pradesh in 2015 and more than double the percentage of SC population in three states in 2015 (Kerala, Gujarat and Assam). At the all-India level as well, this ratio continues to be skewed adversely against SCs, STs and Muslims through all five years.”

The report said an “aspect of police discrimination is the unfair targeting of certain vulnerable communities by the police and their false implication in cases”. In this regard, it said when respondents were asked to share their views on the false implication of Dalits in petty crimes, Adivasis on Maoist charges and Muslims in terrorism-related cases, 38% respondents agreed with the proposition that often the police falsely implicates members of backward castes, such as Dalits, in petty crimes such as theft, robbery, dacoity etc. Likewise, many claimed that Adivasis were falsely implicated on Maoist charges and Muslims in terrorism related cases, but the proportion of these was “not as high”.

An examination of state-wise opinion, the report said, pointed out that Dalits in Jharkhand, Telangana and Madhya Pradesh; Adivasis in Maharashtra, Gujarat and West Bengal; and Muslims in Telangana, Delhi, Tamil Nadu, Maharashtra and Karnataka were most likely to hold the opinion that their respective communities are falsely implicated by the police than their counterparts in other states.

Drawing a parallel between imprisonment of people from various communities and their representation in the police, the report said only two out of the 22 selected states for this study had met the reserved quota for SCs and these were Punjab and Uttarakhand. Likewise, only six states fulfilled the reservation quota for STs. These were Bihar, Himachal Pradesh, Karnataka, Nagaland, Telangana and Uttarakhand. A slightly higher number of nine states achieved the reservation benchmark for OBCs. These states were Andhra Pradesh, Assam, Jharkhand, Karnataka, Maharashtra, Odisha, Punjab, Telangana and Uttarakhand.

When it came to women in police, the all-India percentage was a “shameful” 7.3% as of 2016, the report said, adding that the state with the highest representation was Tamil Nadu at 12.9%. This, too, was just about a third of modest benchmark of 33% reservation for women, it said. 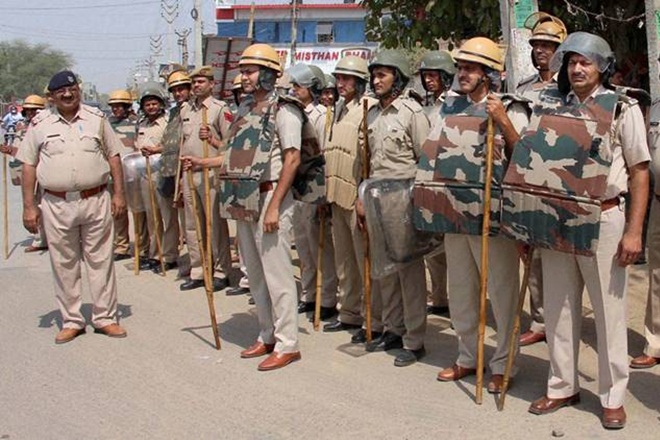 Data revealed that while 24% of Hindus were somewhat or highly fearful of police, in the case of Muslims this rate was 64%, in Christians it was 52% and in Sikhs 51%. Credit: PTI

Police contacted STs, Muslims and poor more than others

The report said while out of 15,562 respondents interviewed, only 14% said they had interacted with the police in the last four to five years, of these 67% had approached the police themselves, while 17% were contacted by the police.

On the police contacting people, the report said “Hindu upper castes were least likely to have been contacted by the police (13%). Scheduled Tribes and Muslims on the other hand were most likely to have been contacted by it (23% and 21%, respectively). In terms of class hierarchy, the likelihood of the police contacting a person is nearly twice as high amongst the poor compared to the upper class (21% as opposed to 12%).”

These findings, it said, reflected two possibilities: “Firstly, Muslims, Scheduled Tribes and those who are poor are less likely to contact the police on their own and secondly that they are more likely to be contacted by the police. This aspect of disproportionate minority contact might have possible links with the over representation of these minorities in different stages of the criminal justice system.” Similarly, it said, “Muslims, OBCs, socio- economically poor respondents were also most likely to have paid money to the police.”

The survey also revealed that the poor and the lower classes had the highest levels of distrust in police at 32% and 31%, respectively. The upper class had the highest levels of trust, and this was true across all genders. “On the whole, the upper class, even within the various caste-based distinctions weaved together, exhibited highest levels of trust. The caste angle on its own also plays an important role in shaping public trust in police,” the report said, adding that STs were found to be most distrustful of the police at 37%, followed by OBCs at 30% and SCs at 29%.

Fear of police varies on basis of demographics

Data revealed that while 24% of Hindus were somewhat or highly fearful of police, in the case of Muslims this rate was 64%, in Christians it was 52% and in Sikhs 51%.

Among Hindus, the report said the highest fear was displayed in the SC category, followed by Other Backward Classes (OBC). Among SCs, fear was highest among the poorest class (23%).

Drawing a correlation between a person knowing of some cases of police violence and his or her likelihood of being fearful, the report said while 15% of the respondents who knew of some violence were fearful the figure jumped to 36% among respondents who knew of many cases of police brutality. “Thus, it seems that the level of awareness does have an effect of how fearful one feels of the police.”

Overall, the report said Himachal Pradesh fared best among all the states, “meaning that here people are the least fearful of being a victim of police excesses, while Punjab comes last, signalling that people are most fearful of the police here.”

Delhi-based human rights lawyer Warisha Farasat said it was also an unfortunate fact that police turns partisan at times of riots and often also assumes the role of a perpetrator.

Farasat also flagged the issue of funds not being fully utilised by the states for police infrastructure and lamented that the executive has never prioritised these issues.

Director of Common Cause, Vipul Mudgal, noted that “in the context of the functioning of the police in India, it is widely believed that they do not always cater to the interests of common citizens and suffer from a systemic lack of accountability. As a result, a perceptible trust deficit has developed over the years.” The report, he said, was an “attempt to understand the functioning of the police by placing people at the centre-stage of their assessment.”

Noting that the report was based on survey data from 22 states covering over 15,000 respondents, he said, it “tries to offer the big picture regarding the understanding of satisfaction and trust in the rule of law, police excesses, perception of discrimination, responsiveness of criminal justice system and levels of impartiality.”

The report covered 42 variables in six main themes of crime rate, disposal of cases by police and courts, diversity in the police force, police infrastructure, prison data and disposal of cases of crimes against SCs/STs/ women and children. It also puts together critical deficiencies flagged by the Comptroller and Auditor General of India in its audit reports of 11 states spread over a decade.