At least one prominent activist, Shabnam Hashmi, co-convener of the NGO ANHAD, said she disagreed with the spirit behind the open letter. 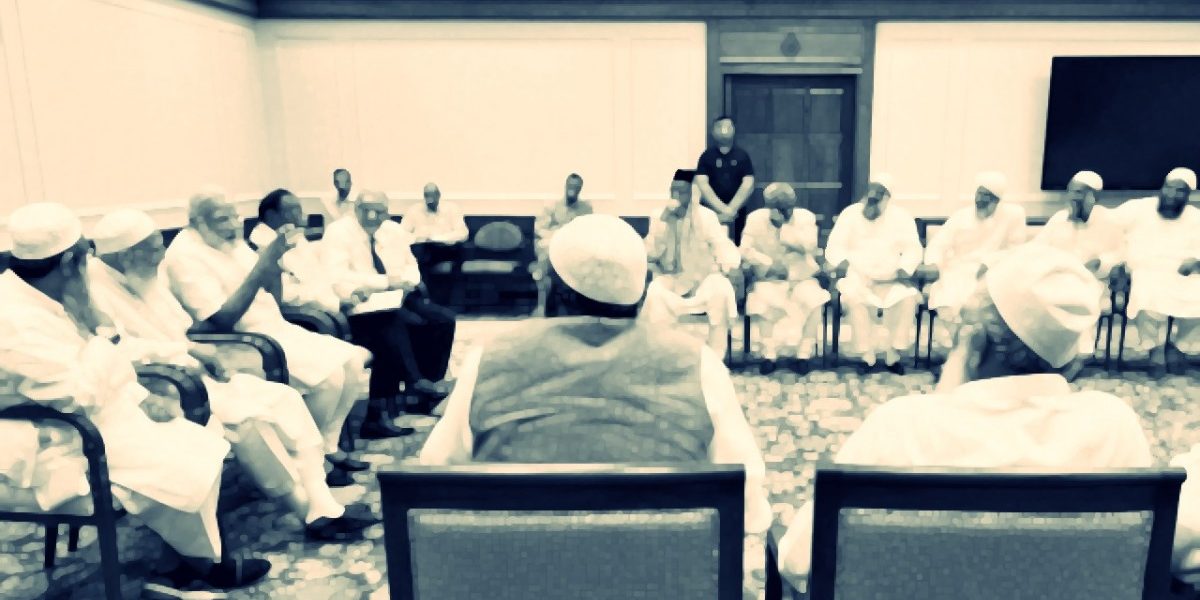 In his first tenure as prime minister, Narendra Modi met with a delegation of Muslim representatives. Now, a group of Muslim clergy and intellectuals has written to him again. Illustration: The Wire, based on a PMO file photo

New Delhi: A group of Muslim activists, educationists, journalists and civil society members has issued an open letter to the prime minister of India, offering their services in creating an administration that is just towards minorities and the poor.

In Narendra Modi’s first meeting with his party MPs, he spoke about the manner in which minorities are ill-treated and committed to working towards earning their trust:

“…the way the poor have been cheated, the minorities have been deceived the same way. It would have been good if their education, their health had been in focus. Minorities have been made to live in fear by those who believed in vote-bank politics. I expect from you in 2019 that you would be able to make a hole in that deception. We have to earn their trust.”

The letter urges the prime minister to make good on his commitment, towards which end the letter-writers have offered to meet with Modi from time to time to advise him on matters that concern minorities.

While lauding his emphasis on the health and education needs of the community, the letter says the prime minister also needs to give his “immediate attention” to “confidence-building measures by ensuring adequate protection under Constitution and the law of the land.” In particular they highlighted the need for ” reassurance to the innocent to ensure that hooligans would not be allowed a free run and would certainly be punished,” something that has not been the case during his first tenure.

The signatories include educationist Kamal Farooqui, Mahmood Madani of the Jamiat Ulema Hind and Zafarul Islam Khan, chair of the Delhi Minorities Commission.

However, at least one prominent activist, Shabnam Hashmi, co-convener of the NGO ANHAD, said she disagreed with the spirit behind the open letter. In a counter statement, she wrote:

My name is Shabnam Hashmi and you do not represent me

Letter doesn’t ask him about the goons let loose on the streets who are attacking Muslims, Dalits and raping women.

It doesn’t ask him about the post May 23 lynchings.

Letter doesn’t ask him about the proposed criminalisation of triple talaq.

Letter doesn’t ask him how a veteran who fought in Kargil has been sent to a detention camp and declared a foreigner.

Even if you have forgotten Gujarat and Muzaffarnagar and over 100 killed in the name of cow, the NRC, and the RSS farman on the ground to now finish the minorities economically, the hatred, the spewed venom across the nation during the past five years and taken to its peak during the election campaign.

Is it fear? Is it buying peace? Or is it having no back bone?

If you have written this out of fear then I will not call you names. I sympathise with you.

Still I want to tell you My name is Shabnam Hashmi. I might not be a practising Muslim but this country treats me like one now. AND you surely do not represent me.

The open letter written by the 19 civil society representatives and their offer to advise Modi takes on salience in light of the fact that there are very few Lok Sabha MPs who belong to minority groups. Muslims are especially underrepresented. The newly formed Lok Sabha only has 26 Muslim MPs, which amounts to 4.7% of the total number of members, whereas Muslims are more than 14% of the total population.

Also read: Trust That Begets Fear Is Not Trust

Although Modi’s Bharatiya Janata Party contested 436 seats, it only fielded six Muslim candidates (three from Jammu and Kashmir, two from West Bengal and one from Lakshadweep), none of whom won.

Even more astonishing is the fact that there is only one Lok Sabha Muslim MP, Mehboob Ali Kaiser from Bihar’s Khagaria, in the ruling National Democratic Alliance. A cabinet that has only one Muslim (minister for minority affairs Mukhtar Abbas Naqvi) now shoulders the responsibility of making India’s Muslims believe that they will not have to live in fear and that they will receive the same opportunities as members of majority groups.

The open letter has been signed by: