At the gathering, Kris read the preamble to the constitution, along with slogans and poetry about issues affecting the queer community. 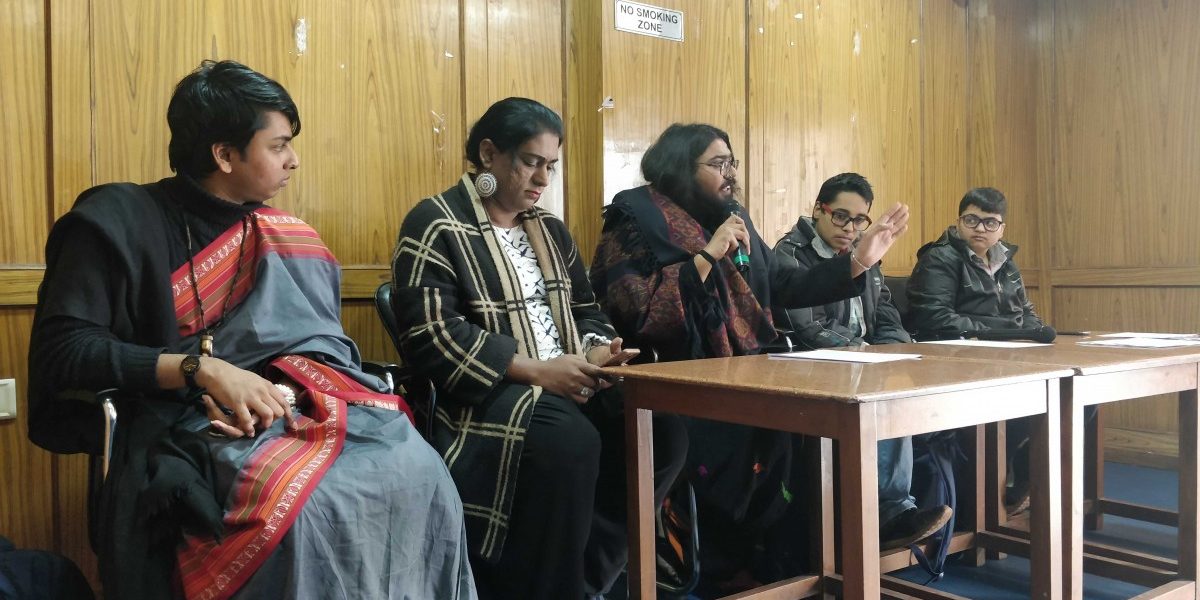 Members of the queer community speak at Press Club of India on February 7, 2020. Photo: Tarushi Aswani

New Delhi: Members of the queer community came out strongly in support of Kris Chudawala and others who have been charged with sedition over slogans raised in a Mumbai Pride solidarity gathering on February 1 at a press conference here.

As The Wire has reported earlier, Queer Azadi Mumbai (QAM) and Humsafar Trust had held a solidarity gathering this year after the Mumbai Police denied them permission to hold the annual Mumbai Pride march at the August Kranti Maidan – reportedly on the grounds that the rally would also address issues surrounding the government, the Citizenship Amendment Act and the National Register of Citizens (NRC).

At the gathering, Kris read the preamble to the constitution, along with slogans and poetry about issues affecting the queer community. However, Queer Azadi Mumbai, including activist Pallav Patankar, distanced themselves from Kris soon, saying that they did not approve of the path that the sloganeering had taken.

BJP MP Kirit Somaiya and former CM Devendra Fadnavis had been quick to take this up and tweeted on the same, asking the Maharashtra government to ”take action” with immediate effect.

What is this going on in Mumbai?
And why is the Maharashtra Government tolerating this ? pic.twitter.com/1uqnKxs2ns

Vihaan, a former TISS student, said at the conference that the politicians had drawn the reference to Sharjeel Imam – who himself has been slapped with sedition charges for a speech – out of context. “Various slogans were being raised about Rohit Vemula and then about Sharjeel, but in the video shared by Somaiya and Fadnavis, the slogans were drawn out of context and made to appear ‘anti-national’,” they said.

The organisers also expressed outrage over the fact that 50 others have been slapped with the sedition charge. Vihaan also drew attention to the risk caused to Chudawala due to misreporting and the use of their deadname in the media.

Ray, a law student from Delhi University and a trans woman said it was wrong of the QAM organisers to distance themselves from their allies.

“We do not expect this out of queer persons who themselves have had to face the struggle of coming out or staying closeted. How can they endanger another queer person?” Ray asked.

Claiming that Pallav Patankar’s tweet, in which he used Kris’s deadname had eventually led to Somaiya launching the “witch hunt,” Ray said that the slogans were not seditious and there was no incitement to violence. “Saying ‘Rohit Vemula hum aapke sapno ko pohchayenge,’ or talking about Sharjeel Imam is not sedition. You may be in disagreement with these people but that does not amount to a charge of sedition,” Ray added.

Kaushal, a student and member of the queer collective Hasratein drew parallels with the manifestation of instruments of oppression in legislation like the Transgender Persons (Protection of Rights) Act, 2019.

Bittu, a member of the Trans Rights Now Collective, while speaking about the National Population Register and National Register of Citizens, sought to illustrate that the parameters for determining citizenship were similar to the oppressive erasure involved in bringing the Trans Act.

“Suppose if someone does not want a trans person to live in their colony, they can easily raise suspicion about their citizenship…We should not forget that the RSS draws its inspiration from Nazi Germany, where not only Jews were exterminated but they also targeted queer and trans communities,” Bittu reminded.

While speaking to The Wire, Bittu added that the ruling BJP sees the queer community as any other minority community and the approach that the BJP has towards governance is to whip up majoritarian sentiments.