Information obtained by The Wire through an RTI response shows that despite a CAG report flagging the MPs' high expenses, they continue to splurge taxpayers' money.

New Delhi: Violating the guidelines prescribed for streamlining parliamentary committee study tours and cutting down expenses, members of the Lok Sabha and Rajya Sabha have spent crores of taxpayers money on frequent outstation tours, reveals information obtained through an RTI query filed by The Wire.

As per guidelines, parliamentarians must stay at government guest houses or hotels during parliamentary committee study tours. Only under special circumstances can accommodation be arranged at private hotels. However, it has come to light that the MPs not only booked the country’s top-rated and costliest hotels, but also incurred huge expenses on meals and transportation during their stay.

The Wire sought information from the Lok Sabha and Rajya Sabha secretariats regarding the expenditure on parliamentary committee study tours as well as details of people who undertook the tours between 2013 and 2018.

The information reveals that more than Rs 15 crore has been spent during 115 study tours in that period. In violation of the RTI Act, however, the Lok Sabha secretariat refused to provide complete information.

The Wire has accessed official documents, including hotel bills, food bills and travel bills of study tours, which show that the extravagant spending includes trips on private cruises.

For instance, the parliamentary committee on industries headed by JD(U) MP Ram Chandra Prasad Singh spent more than Rs 1.83 crore on five study tours during 2016-17. That is, on an average the committee spent Rs 37 lakh on each tour.

Also Read: More Than 80% of the Clean Ganga Fund Has Not Yet Been Spent

During the tour, the MPs stayed in expensive hotels such as Highland Hotel in Ooty, Oberoi in Bengaluru and Aloft Hotel in Coimbatore. A two-day stay in the Highland Hotel cost Rs 4.50 lakh, of which Rs 3.56 lakh was room charges, while Rs 21,853 were spent on food.

In Bengaluru, the stay at the Oberoi Hotel raised a bill of Rs 12.05 lakh, including room charges and food. One of the members of the committee, section officer C.R. Srinivas (contact officer of MP Ratna Dey Nag) spent Rs 3.78 lakh in a single day.

A considerable amount was also spent on transportation. The committee spent Rs 5.50 lakh on conveyance between June 7, 2015 and June 12. This payment was made to Travel Line, a private company located in Delhi’s Ashram area.

Information obtained by the The Wire also reveals that a considerable amount was spent on the purchase of bouquets, while a sum of Rs 14,175 was spent on jute items.

Bills of Study Tours by on Scribd

Guidelines issued in 2005 for parliamentary committee study tours say a tour should only be undertaken if it is indispensable. The committee members and accompanying officers should be accommodated in government guest houses, including those of PSU, MLA Hostels and Circuit Houses. Where a government guest houses is not available, government-owned hotels must be booked. If even government-owned hotels are unavailable, arrangements may be made in good hotels. As per the guidelines, arrangements for the committee shall be dignified, but shall not be ostentatious and should not leave room for adverse criticism from the media and public.

On February 2, 2016, the standing committee on health and family welfare visited the Guru Govind Singh Tricentenary Medical College in Gurgaon and Vardhman Mahavir College in New Delhi, spending Rs 1.25 lakh . Of this, Rs 22,295 was paid to Glorious India Travel, an agency based in Chanakyapuri in Delhi, while Rs 92,646 was paid to Sultanpur’s Rosy Pelican Resort for accommodation. 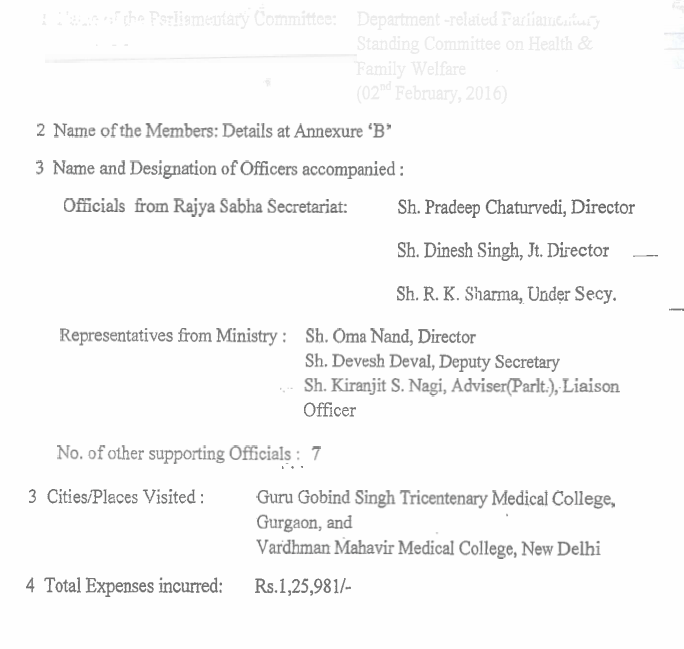 The standing committee on health and family welfare spent over Rs 1.25 lakh on one day.

Similarly, a committee for the welfare of Scheduled Castes and Scheduled Tribes paid Rs 11,800 to JMD travel, an agency based in Delhi’s Ambedkar Nagar, for traveling to the AIIMS on September 6, 2016.

The committee is headed by BJP MP from Ahmedabad West Kirit Premjibhai Solanki. He was accompanied by 22 other MPs on the tour.

The guidelines require members and officers to be provided with transport facility during the tour. Transport shall also be provided to drop and receive the members at airports or railway stations. They suggest that one car is sufficient for two members/officers and that air-conditioned cars may be arranged when necessary.

However, information received under the RTI reveals that huge sums were spent on providing transport facilities to members and officers. The parliamentary standing committee on health and family welfare paid more than Rs 20 lakh to Travel Line for three study tours to Coimbatore, Ooty, Mysore, Bengaluru, Mumbai, Goa, Manipur, Meghalaya and Guwahati. The tours were for a period of 20 days. On average, more than 20 people, including MPs and officers, went on each tour.

Expenditure on Study Tours … by on Scribd

Meanwhile, the parliamentary standing committee on health and family welfare spent more than Rs 30 lakh on tours to Bengaluru, Mumbai and Goa between October 20-26, 2016. During the visit, the committee members booked accommodations at the five-star Lalit Hotel in Bengaluru and Holiday Inn in Mumbai. The committee includes ten Rajya Sabha and 20 Lok Sabha MPs. The ministry paid Rs 10.12 lakh to Lalit Hotel for the study tour, whereas Holiday Inn was paid Rs 7.89 lakh for one day. Of this, Rs 4.63 lakh was paid only for accommodation.

Moreover, a payment of Rs 6.66 lakh was made to Travel Line agency for hiring cabs. The agency has provided cars on rent to the ministry on previous occasions as well. In addition, jute bags worth Rs 20,000 were also purchased.

Also, 20 MPs and ministry officials spent Rs 29.94 lakh on a study tour to Imphal, Shillong and Guwahati from January 15-22, 2018. The committee booked the Classic Hotel in Assam, Polo Towers in Shillong and Taj Vivanta Hotel in Guwahati. Once again, the services of Travel Line agency were used, which was paid Rs 7.79 lakh for transportation. Leather bags worth Rs 23,600 was also purchased during the trip.

The members also enjoyed a private cruise trip, incurring a cost of Rs 56,975. 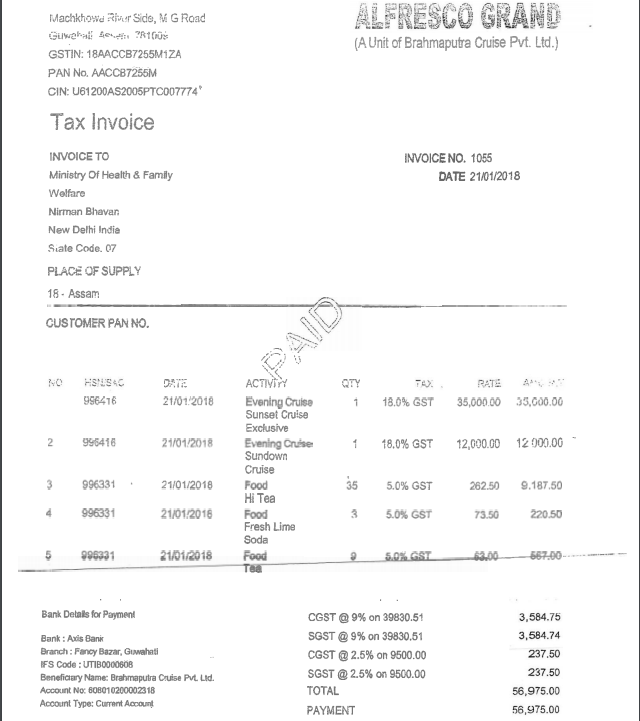 In October 2018, vice president M. Venkaiah Naidu announced that permissions will not be granted to parliamentary committees serviced by the upper house for more than two study tours a year. Naidu insisted that committee meetings should be held in Delhi and that a maximum of three officials would be allowed to travel with the committee for offsite visits.

Information obtained by The Wire reveals that in most tours, more than three officials accompanied the committee. In some cases, nearly ten additional officers travelled, though in most cases, four officers from the secretariat joined the tour.

Between January 15-22, 2018, four officers of the Rajya Sabha secretariat, nine representatives of the Ministry of Health and Family Welfare and ten assistant officers accompanied the parliamentary committee’s visit to Imphal, Shillong and Guwahati.

Four Rajya Sabha secretariat officers joined the study tour to Chennai and Thiruvananthapuram organised by the selection committee on the Motor Vehicles (Amendment) Bill between October 11-13, 2017.

Similarly, five officials accompanied a department-related parliamentary standing committee of the home ministry on a study tour to Kochi and Lakshadweep from April 24-27, 2017.

Expenditure on Study Tours … by on Scribd


The parliamentary committee’s guidelines state that officers of the level of joint secretary should avoid accompanying the study tours. But the information reveals that this is not the case. Besides, the committee has been organising several outdoor visits every year.

A tour proposal may be presented for consideration before the Speaker only there is specific requirement to visit the establishments or other necessary and related bases. Generally, permission will not be granted for more than one study tours in a year.

Similarly, a standing committee on transport, tourism and culture toured twice in 2015 and four times in 2016. On the other hand, a parliamentary committee of the home ministry headed by Congress MP P. Bhattacharya organised three study tours in 2015. CPI(M) leader Sitaram Yechury was also a member of the committee.

In 2015, the committee on subordinate legislation conducted four study tours. On three occasions, the committee, headed by Congress MP T. Subbarami Reddy, toured for more than five days. In 2016, the committee went on four tours and five in 2017.

In 2014, a Comptroller and Auditor General (CAG) report on the parliamentary committee’s study tours also highlighted the fact that members and officials were staying at costly hotels and enjoying expensive food. The report found that the Rajya Sabha secretariat allocated a huge amount of taxpayers’ money to MPs and officials between 2011 and 2013, violating the rules.

Even after the report was published, MPs continued to spend large amounts of money on study tours.

Transparency International – India, an NGO working against corruption and towards promoting transparency, wrote a letter to the Prime Minister’s Office (PMO) in 2014. But no response has been received yet.

The NGO’s executive director Ramnath Jha told The Wire, “It is a matter of concern that despite being admonished by the CAG, a huge amount of taxpayers money is being spent on study tours. We wrote a letter to the PMO in this context but no action has been taken. Looking at the seriousness of the issue, we are preparing to send another letter.”

The Wire sent a list of questions to heads of various committees but no response has been received yet.

The story will be updated if and when a response is received.