Speculation on what the subject of the PM's speech could be had ranged from the tension with China and the modalities of Unlock 2.0 to the possibility of a coronavirus vaccine announcement. 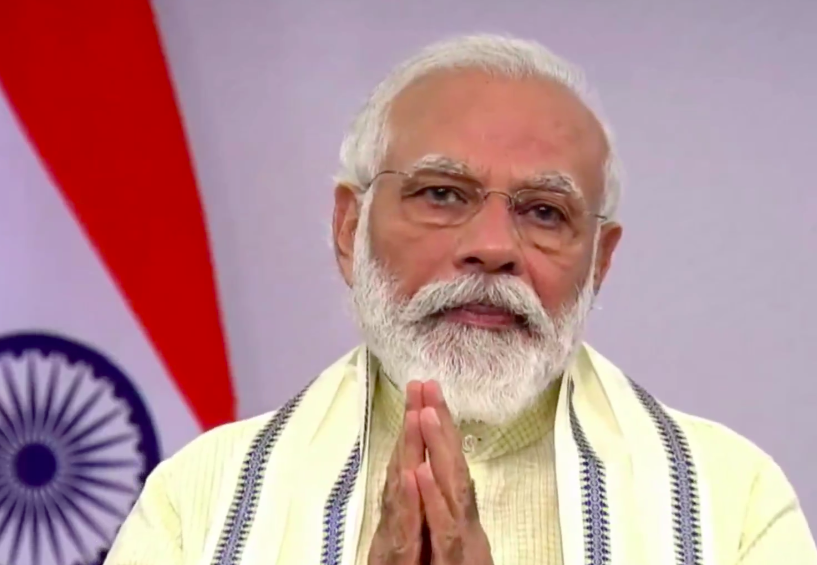 PM Modi during his address on June 30. Photo: Video screengrab

New Delhi: Dousing speculation on a COVID-19 vaccine or a definitive announcement of India’s stance regarding China, Prime Minister Narendra Modi, in his address on June 30, said that the government was going to extend the free ration scheme till the end of November.

As the prime reason behind the extension of the Pradhan Mantri Garib Kalyan Anna Yojana, Modi mentioned that the calendar would be seeing a number of festivals.

He named several Hindu festivals, along with August 15 and Guru Purnima, to illustrate the point and said that the Yojana would continue till Diwali and Chhath. Several noted on social media the marked absence of the mention of Eid ul-Adha, a Muslim festival in late July, and Guru Purab, observed by Sikhs, in late November.

Commenters on social media have mentioned how Chhath is primarily celebrated in Bihar, Jharkhand and parts of Uttar Pradesh, among which states, Bihar is going to polls in October-November this year.

Tuesday’s speech, at 16 minutes, was one of the shortest addresses by the prime minister.

“As many as 80 crore people will get free rations…five kilos of rice or five kilos of wheat, and in addition, each household will receive a kilo of whole grams per month,” he said, adding that the extension would cost the government Rs 90,000 crore.

Under this scheme which was announced by Union finance minister Nirmala Sitharaman on March 26, 80 crore ration card holders in the country had been entitled to 5 kilograms of grains (wheat or rice) per person, free of charge, for the months of April, May and June. This was in addition to the usual 5 kg of grain per month to which they were entitled under the National Food Security Act (NFSA).

Now, as per Modi’s announcement, each ration card-holding household will continue to be entitled to an additional 5 kilograms for another five months. This is over and above the provision of 5 kilograms of grain per month under the NFSA.

“Let there not be a single home where the hearth is not blazing. Everyone tried to ensure that no one went hungry,” the PM said.

He also mentioned figures of the packages brought by his government with the health crisis and lockdown in effect.

The prime minister also extolled the virtues of the ‘One Nation, One Ration Card’ effort under which poorer sections who do not live in their birthplaces can avail themselves of the benefits of the PDS. Bal Krishan Negi and Seema Bathla had analysed for The Wire how the scheme would have benefitted affected migrant labourers at the time of the lockdown.

Former secretary of the Union ministry of agriculture and farmers’ welfare Siraj Hussain said that the unprecedented pile up of stocks in the government’s granaries made the decision to extend the provision of additional grain a no-brainer.

“It is a good decision by the government to extend additional allocation of 5 kg free ration and 1 kg dal (pulses) per month to about 80 crore people who are covered under NFSA. Government has done well to extend it to November. The government had about 97 million tonnes of food grains on June 1, 2020. There is going to be acute shortage of storage space for procurement of rice in ensuing Kharif crop,” he said.

India currently holds about 100 million tonnes of food grain in its stock, while the buffer stock norm for July 1 is 41 million tonnes. This is after the provision of additional food grains for the last three months. So, there is no shortage of food grains as commentators have pointed out and as minister for Consumer Affairs, Food and Public Distribution, Ram Vilas Paswan, himself pointed out in an interview to The Wire a few days ago.

Modi also did not use this opportunity to extend the benefit of the public distribution system to more people as has been called for by several experts like Jean Dreze and Reetika Khera, for two main reasons.

First, many people who would not have been eligible to receive grains under the NFSA before the lockdown will now be in need as their incomes have been drastically reduced or wiped out. “Many gig economy workers, street vendors, auto and taxi drivers etc, who otherwise managed on their own are in need of support right now. Our food stock allow us to expand the PDS,” Khera said.

Second, according to an estimate by Meghana Mungikar, Drèze and Khera, about 10.8 crore people are excluded from the NFSA because the population figure used to calculate the number of beneficiaries is from Census 2011 – almost 10 years old. Since then India’s population has grown by an estimated 150 million.

Like in his previous speeches, Modi began this one by extolling the virtues of the timing of India’s lockdown. Modi stressed that the decision was a “timely and compassionate” one. Yet, he said that people had been growing lax at a time when more cautiousness was necessary.

“During the earlier days of the lockdown, rules had been followed with a lot of seriousness. Now, the government, municipal bodies and citizens need to show the same type of cautiousness, especially in containment zones,” he said, citing the example of Bulgaria (without naming the country) where the prime minister had been fined for not wearing a mask at a public place.

This is the prime minister’s sixth address to the nation since the outbreak of the pandemic.

Speculation on what the subject of the prime minister’s speech could be this time, had ranged from the tension with China and the modalities of Unlock 2.0 to the possibility of a vaccine that could fight the coronavirus.

I appeal everyone to tune in to Prime Minister Shri @narendramodi ji‘s address to the Nation at 4 PM today. pic.twitter.com/Bvet4iIE1D

Congress leader and former party president Rahul Gandhi had, an hour before the speech, sought to train the focus of the prime minister’s address on the China question.