Farm Law Protests: Modi Must Ensure January 26 Does Not End in Blood on the Streets

Whatever the Supreme Court decides, the government has two weeks left to decide whether it will find a way of meeting the farmers' demand for a serious reconsideration of the three bills, or run the risk of turning Delhi into a battle zone. 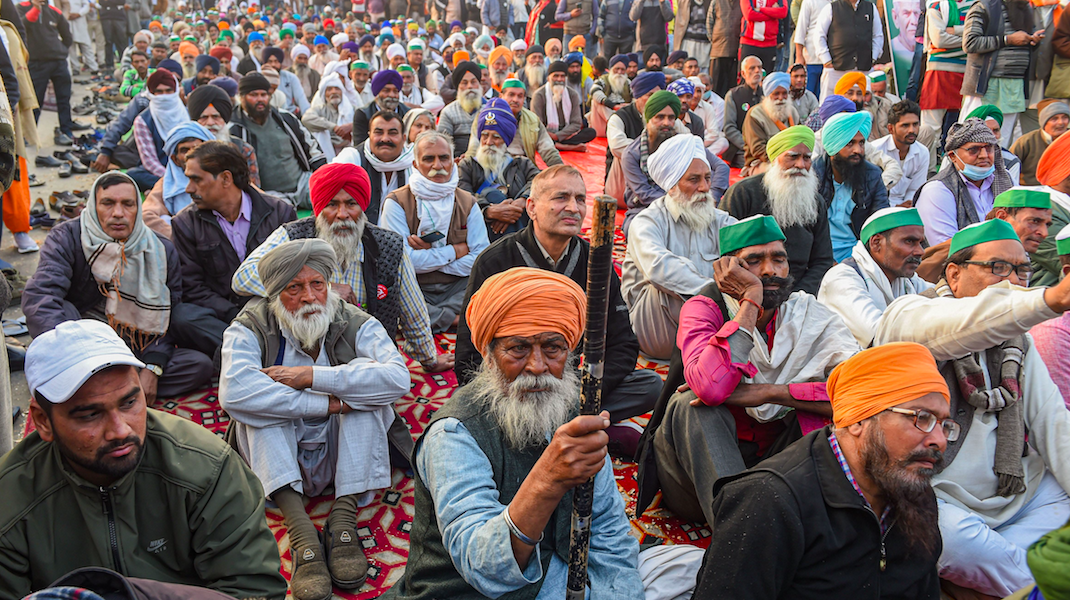 At first hearing, Prime Minister Modi’s unhesitating – and unqualified – condemnation of the invasion of the US Capitol by an extreme right-wing mob came as a breath of fresh air to those who have watched his government’s systematic assault on human rights and constitutional freedoms in the nearly seven years since he came to power. But his government’s sudden and sharp turn away from negotiations with the farmers and its decision to let the Supreme Court decide the matter, has given his January 7 statement a more sinister slant.

Mercifully, the Supreme Court is set to  stay the implementation of the three farm Acts, but its observations on Monday showed how uneasy the bench feels about the lengths to which it has encroached upon the prerogatives of the executive. What is more, by stating  that “it needs to be seen if protesters can be removed a bit from there”,  it has left a loophole open for the government to use force if necessary to vacate the national highway beyond the Singhu border where the farmers have pitched their camps. It is worth remembering  that the “duty” to ensure freedom of movement is exactly the pretext on which the Modi government had launched its onslaught upon the Shaheen Bagh protesters.

The Supreme Court’s discomfiture is understandable, for it is not the Eye of God.  On the contrary it is possibly the least qualified body in India for taking a decision on the substance of the issues that have been raised by the three farm acts. For these are entirely economic and to some extent political.

Whether rightly or wrongly, a very large body of farmers believes that these bills will severely impoverish and possibly ruin them and that the government is pushing them through in order to enrich crony capitalists close to it. No matter how many people the court hears, and how much homework the learned judges do, they will not become economists, let alone political economists, overnight. For their bailiwick is safeguarding the law, the constitution, and due process in their implementation.

If the government remains adamant upon the enforcement of its new farm laws, all that a Supreme Court  bench can do is to decide whether the farm bills have been passed in a manner consonant with the constitution and its enabling clauses and interpretations. Modi and his advisers are confident they can show the court that the government has done nothing that is legally or constitutionally wrong this. So, it is difficult not to suspect that the prime minister’s trenchant declaration that “the democratic process cannot be subverted through unlawful protest” was not so much a requiem for Donald Trump as an advance warning to the farmers of what he would do, if they insisted upon forcing their way into the capital on January 26.

Since the farmers have made it clear that they will not back down, the government has 16 days left to decide whether it will find a way of meeting their demand for a serious reconsideration of the three farm bills, or run the risk of turning Delhi into a battle zone on January 26, with all the hideous consequences that will follow.

Any government that puts the good of the people ahead of its own should find no difficulty in stepping back. In 2005, Manmohan Singh faced a similar, nationwide, opposition to the Indo-US nuclear agreement when its outlines were first revealed to the public in July. But instead of passing it by ordinance while parliament was in recess, and presenting it as a fait accompli when it reconvened, he first gave months for every informed opinion in the country to be aired in the then entirely unfettered media. As a consensus began to emerge, he took another year to persuade the Congress’s alliance partners, the Left, to support it.

Finally, he allowed a two-day debate in parliament – watched by the entire country – before putting the bill to a vote. The result is that not only has India got the benefits of civil nuclear cooperation but it has become the foundation of the far more wide-ranging Indo-US strategic consensus that exists today.

An exemplar of authoritarian rule

In the sharpest possible contrast, the way the Modi government enacted the three farm laws is the very exemplar of authoritarian rule: a decision that the government knew would cause an earthquake in the lives of 65% of the people of the country. A decision that was taken without any forewarning or discussion, and enacted by ordinance under the pretext of the COVID lockdown of parliament.

It was submitted to the Lok Sabha only for “ratification” on September 17 and pushed through both houses in just three days with no prior notice, no standing committee appraisal, and no time for debate on the floor of the House.

So great was the government’s hurry that it swept a model Contract Farming Bill that had been prepared two years earlier for adoption by the states in a manner similar to Atal Bihari Vajpayee’s Electricity Act of 2003 into the dustbin. Vajpayee took four years, and several meetings of the National Development Council, to enact that path-breaking Bill. Modi is too impatient, too impetuous, and too rash, to follow his mentor’s example.

If Modi has no second thoughts, the bitter fruit of this charade of democracy will be the destruction of a complex, informal, production, trade and finance network that is responsible for transforming India from a chronically food deficit country that lived from ‘ship to mouth’ 50 years ago, into one of the top exporters of agricultural produce in the world.

Therefore, if any segment of India’s citizens had deserved to be heard – and heard with respect – before the government took its decision, it was the farmers who had been responsible for this transformation. But ever since their struggle began, the government has followed a two-pronged strategy: the first is to stall their protest and wear them out with talks that lead nowhere; the second is to discredit their motives and belittle the support they enjoy.

The first is apparent from the fact that after several rounds of discussions, all that the government has conceded is that it will not criminalise stubble burning! The second can be deduced from the systematic campaign of denigration that the government’s spokespersons and its supportive media have launched behind the charade of ‘reasonableness’ to delegitimise the farmers’ protest, and cast doubt upon their loyalty and commitment to the nation.

To do this they have claimed that only 6% of farmers have actually sold their produce at the minimum sale prices fixed by the Central government for foodgrains; that these are mostly the rich farmers of Punjab and Haryana, who have been the principal beneficiaries, and that they, in cahoots with arhatiyas – traditional commission agents – and money lenders, have bilked the poorer farmers of an estimated 14% of the realisable price of (30-40% of the net profit from) their produce.

In this telling, the only way to improve the lot of the poorer and marginal farmers is to tear out this system root and branch or, as is now being suggested, allow it to wither on the vine by opening up the entire county to unrestricted private trade, and contract farming. The latter they claim is particularly needed to give the small and marginal farmers some bargaining power to fix stable prices for their perishable fruit and vegetables.

To dehumanise the protesting farmers further the Sangh Parivar’s trolls have also added that the majority of them are Sikhs, and that many of them are, or are being instigated by, Khalistanis.

This final insinuation is not only a brazen lie but also wickedly irresponsible. For those of us who lived through the terrorism of the ’80s and early ’90s in Punjab know that it was the ‘revolt’ against the Khalistanis by hundreds of the state’s 700,000 Sikh ex-servicemen, who demanded gun licenses from the government in 1990 and chased and killed the terrorists in the fields, that finally enabled the Punjab Police to end the Khalistan insurgency.

In the 16 days that lie ahead, it will be wise for Modi to remember this and be aware that his government could find itself facing another generation of the same stubborn, heroic ilk if he allows January 26 to end in a bloodbath.