According to information obtained under the RTI, of the Rs 55 crore last released under the UPA government in 2013-14, Rs 24 crore remains unspent.

New Delhi: More than four years since it came to power, the Narendra Modi government has not released a single rupee for the rehabilitation of manual scavengers. Not only that, the government is yet to spend almost half of the funds released by the previous UPA government.

This information has been brought to light by a right to information inquiry filed by The Wire.

According to the information made available by the National Safai Karamcharis Finance and Development Corporation (NSKFDC), working under the aegis of the Ministry of Social Justice and Empowerment of the Central government, Rs 55 crore was released during the tenure of the previous UPA government in 2013-14.

According to information revealed under the RTI, the government has released a total of Rs 226 crore under this scheme since 2006-07. All funds were released before the financial year 2013-14. Since the Modi government came to power in 2014, no further funds have been released.

Second, manual scavengers are given occupational training in the interest of rehabilitation. For this, they receive Rs 3,000 per month alongside two years of skill development training. Third, subsidies are provided on loans up to a predetermined fixed amount for manual scavengers.

According to the RTI information, cash assistance of Rs 40,000 was given to 8,627 people in 2015-16, whereas so far this year (2018-19), 365 manual scavengers have received it. Similarly, 1,567 people in 2016-17 and 890 in 2017-18 were given the one-time cash assistance of Rs 40,000. Even for those who received this payment, founder of the Safai Karamchari Andolan (SKA) and Ramon Magsaysay award laureate Bezwada Wilson does not think the government’s scheme for rehabilitation is anywhere close to adequate.

Wilson is of the opinion, “There is no comprehensive thought regarding rehabilitation. The government wants to get rid of manual scavengers. This is not an adequate scheme. It does not count female sanitation workers. The government hands out loans according to the scheme, but people are afraid of taking loans for fear of not being able to pay them back.”

He further said, “The government says do business, but how can they do business after society has kept them under its heels for so long? Doing business requires basic access to know-how. Handing out loans does not translate to business; for that training is required.”

Also read: Rehabilitation, Only on Paper: Manual Scavengers of Dausa Still Continue With the Practice

Thereafter, the Central government released Rs 100 crore for the NSKFDC under the scheme in 2008-09, the highest amount to date. 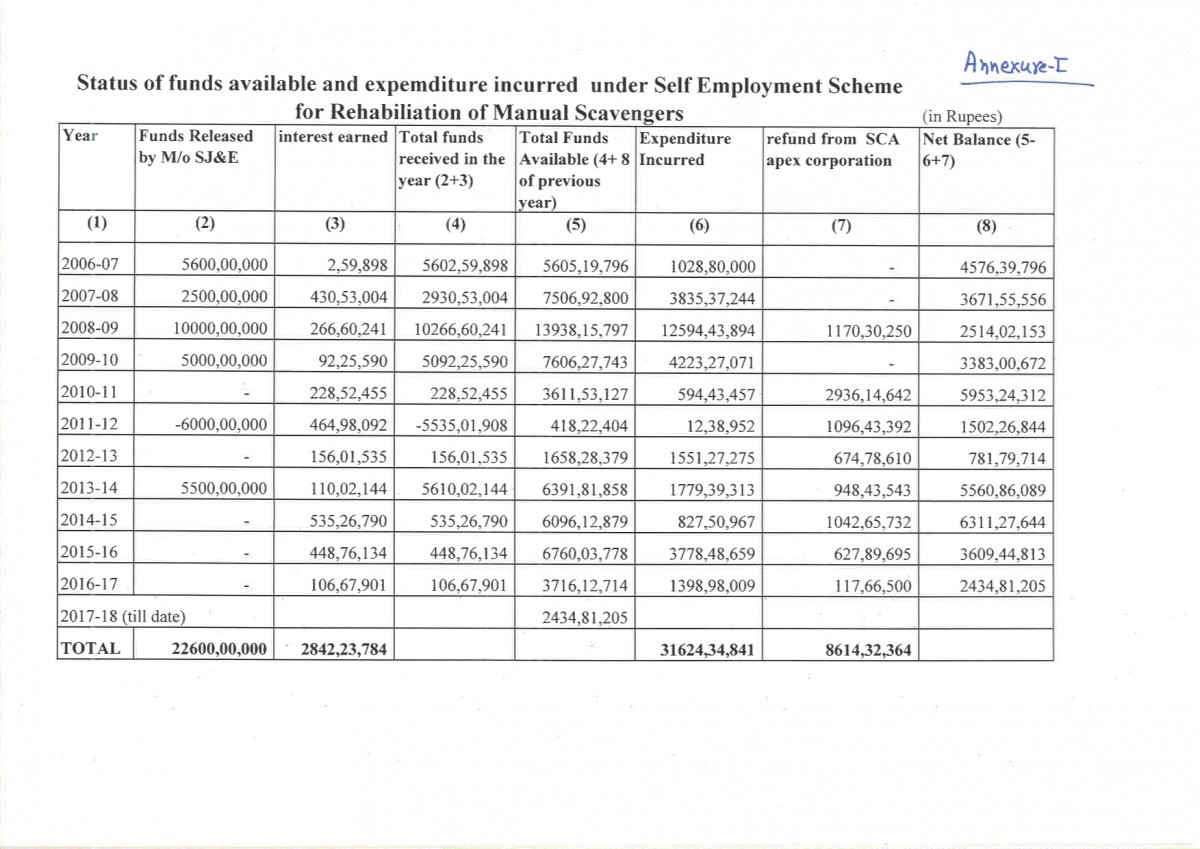 Having said that, a significant chunk of the meagre funds sanctioned by the ministry have not been put to use. Not a paisa has been released in the last four years, and of the funds released during the UPA government’s tenure, over Rs 24 crore has not been spent.

Figures reveal that a significant chunk of the funds released are similarly not being spent year after year.

The Wire has sent a list of questions on the issue to the NSKFDC and the Ministry of Social Justice and Empowerment, though so far there has been no response. If a reply is received, the story will be updated.

The first law pertaining to the abolition of manual scavenging in the country came into being in 1933. Thereafter, a second law was passed in 2013, according to which employing people for cleaning septic tanks and drains or availing their services for similar purposes is prohibited.

According to a recent survey conducted under the ministry, 53,326 people over 12 states are currently engaged in manual scavenging. This figure is four times the last registered official figure of 2017, when the number was reported to be 13,000.

Even this is not the final data on the number manual scavengers, as it incorporates figures from only 121 of the over 600 districts in the country

There have been allegations from activists that most states do not disclose the number of manual scavengers working there. Of the 53,000 manual scavengers cited in the Centre’s national survey, states have officially accepted only 6,650. Uttar Pradesh has registered the highest count of manuals scavengers, at 28,796.

Ashif Sheikh, director of the NGO Jan Sahas and a member of the central monitoring committee at the Ministry of Social Justice and Empowerment, said about the surveys, “Successive Central governments have conducted seven national surveys in the past 26 years for the identification of manual scavengers. A survey conducted in 1992 revealed that the country had 5.88 lakh manual scavengers. In 2002-03 that number increased to 6.76 lakh. Later on, after the government made amendments, the figure rose to almost eight lakh (7,70,338).”

He went on, “The dilemma is that in the nationwide survey of 2013, the numbers fell miraculously to a few thousand, only 13,639. Every single survey done for the quantification of manual scavengers has always been deeply flawed.”

The government believes the principal reason for manual scavenging to be insanitary or dry toilets. According to Section 5 of the Prohibition of Employment as Manual Scavengers and their Rehabilitation Act, 2013, the construction of dry toilets is illegal.

States like Gujarat have still not acknowledged that they have manual scavengers at all, even though Gujarat has 32,690 dry toilets. The national capital, Delhi, also has 69,640 such toilets.

Bezwada Wilson says, “This government wants nothing to do with manual scavengers. Building toilets is their hobby. Manual scavengers have been carrying the excrement of our society on their heads for centuries. Prime Minister Narendra Modi talks profusely of his ‘Mann ki Baat’, but the manual scavenger has never featured in any discussion on his mind’s preoccupations.”

Translate from Hindi by Binit Priyaranjan. You can read the Hindi version here.