Under Modi Government, Funding for Railway Amenities Has Taken a Back Seat

Thanks to the uneven utilisation of funds, actual spending on amenities like foot overbridges has seen negative growth in recent years.

A view of how the foot overbridge in Mumbai's Elphinstone station looked a few months before the stampede took place in 2017. Credit: Twitter 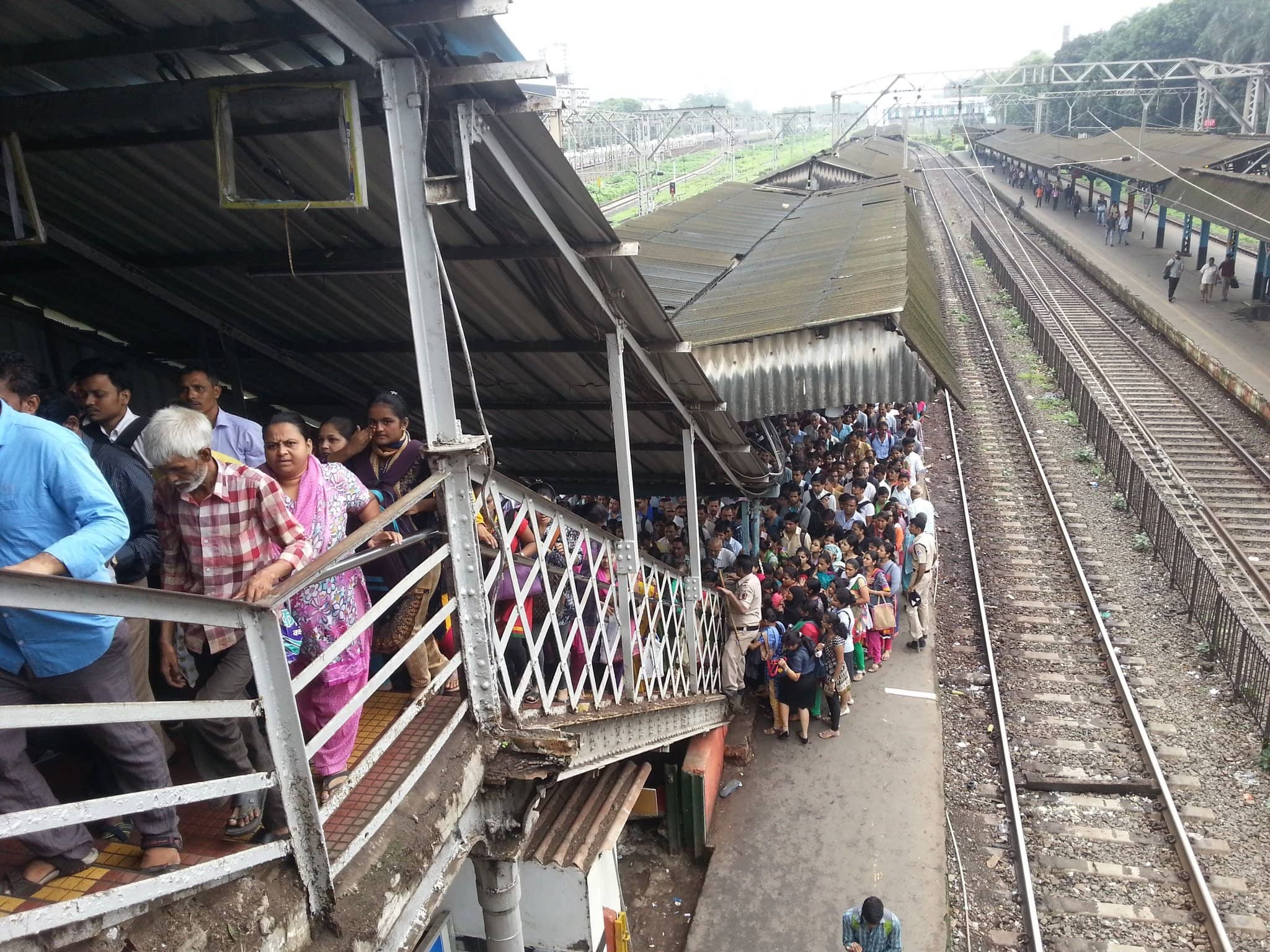 A view of how the foot overbridge in Mumbai’s Elphinstone station looked a few months before the stampede took place. Credit: Twitter

New Delhi: Data shows that the existing rail infrastructure remains neglected under the Modi government, which has taken a heavy toll on passenger safety.

The recent stampede over a narrow foot overbridge near a local Mumbai railway station, which resulted in the tragic death of more than 20 people, is a chilling reminder that the bulk of rail infrastructure that was built during the British Raj is now unable to cope with the increased traffic. There is thus an urgent need to renovate and modernise the rail infrastructure.

A close look at government spending patterns show that the bullet train system appears to be a greater priority than the renovation of rickety and outdated rail infrastructure.

The government has envisaged spending Rs 65,000 crore for the high-speed rail project during 2016-20 but just Rs 12,500 crore for providing passenger amenities including foot overbridges, escalators and toilets.

Not only is the budget for passenger amenities puny, it is hardly ever fully utilised. For example, nearly 17% of the allocation made for passenger amenities in 2014-15 was not utilised. The shortfall in fund utilisation on this head was as high as 38% in 2015-16. While Rs 1,838 crore was allocated for this purpose in 2016-17, it is still not known how much was actually utilised.

Thanks to the uneven utilisation of funds, actual spending on amenities has seen negative growth in some years. For example, actual expenditure on this head was Rs 906 crore and Rs 910 crore in 2009-10 and 2010-11 respectively but slipped to Rs 859 crore in 2014-15.

Taking note of the lack of foot overbridges at suburban stations, the national auditor observed in a 2016 audit report: “FOB [foot overbridge] is an important passenger amenity and passenger safety item, provided to facilitate movement of passengers from outside the station to any platform and from one platform to another. FOBs ensure safety by preventing trespassing of railway track by passenger.”

The Comptroller and Auditor General also found a shortfall in booking counters and toilets at railway stations.

The railways has blamed the heavy rain for the Mumbai tragedy instead of accepting its failure to widen the foot overbridge to meet the requirement of increased traffic.

Similarly, the government remains in denial mode over the poor condition of rail tracks, which has led to a spike in accidents in recent years.

India’s death toll of 193 from train derailments in 2016-17 was the highest in a decade. But rather than accepting the gravity of the situation, the government has tried to silence critics by saying that the number of derailments has decreased under the NDA rule.

Also read: What Explains the High Number of Railway Accidents?

The government has decided to set up a special fund, the Rashtriya Rail Sanraksha Kosh (RRSK), to provide for passenger safety in railways. It will be created with a corpus of Rs 1 lakh crore over a period of five years (Rs 20,000 crore per year). The central government will provide a seed amount of Rs 1,000 crore for this fund. The balance will be raised by the railways from their own revenues or other sources.

However, that sounds like a tall order for the national transporter which is struggling with falling revenues.

A House panel has also expressed scepticism over the railways’ ability to contribute requisite money to the fund.

“With railways struggling to meet its expenditure and declining internal revenues, it is unclear how railways will fund the RRSK. The Kosh will require the railways to spend Rs 19,000 crore every year for the next five years,” Lok Sabha’s Standing Committee on Railways noted in a recent report.

The committee said, “Considering the financial health of railways, in case of lesser budgetary support or less revenue surplus, appropriation to RRSK will be hampered.”

“Rather than appropriate separate funds to RRSK, diverting the amount already appropriated to two different funds – Central Road Fund and Depreciation Reserve Fund – is not a matter of financial prudence but jugglery of finances,” the panel added.

Another parliamentary panel report titled ‘Safety and Security in Railways‘ flayed the national transporter over derailment of Indore-Patna Express last November that resulted in the death of 149 passengers, saying there was a total failure in maintaining safety standards of rail tracks.

The report concluded that rail accidents have increased and train speed reduced due to congestion in network caused by lack of investment.