While the meat ban itself has evoked questions on democracy and rights, a BJP MP has asked for the restriction to be imposed across the country during Navratri. 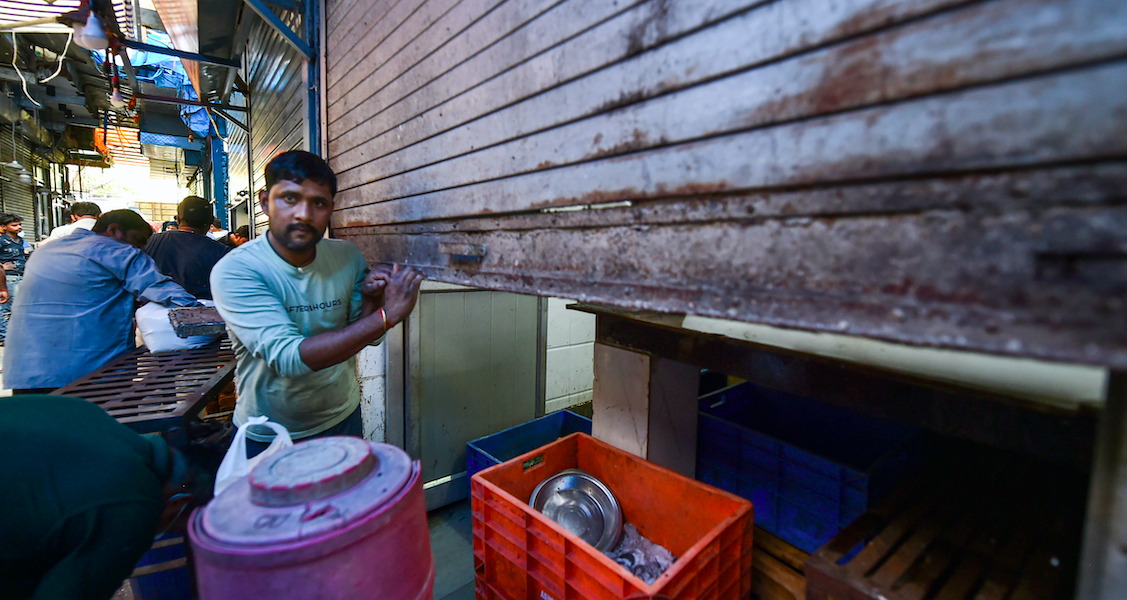 A worker closes the shutter of a meat shop, at INA market in New Delhi, Tuesday, April 5, 2022. Photo: PTI

New Delhi: In spite of the absence of an official order, reports had it that several meat shops in east and south Delhi remained shut on Tuesday, April 5, following verbal orders from the respective mayors of their civic bodies.

The mayors called for meat shops to remain shut during the Navratri period observed by a section of Hindus.

‘No need to open meat shops’

“Most of the meat shops were closed today. Most people do not eat meat, onion-garlic during Navratra time. So keeping in view the religious sentiments of the public, there is no need to open meat shops during the Navratra festival. An order in this regard will be issued today,” Suryan told PTI on Tuesday.

Suryan’s comment that “99% of households in Delhi do not even use garlic and onion” during Navratri had earned its share of reactions on social media.

During Navratri, 99% of households in Delhi don't even use garlic & onion, so we've decided that no meat shops will be open in South MCD; the decision will be implemented from tomorrow. Fine will be imposed on violators: Mukkesh Suryaan, Mayor of South Delhi Municipal Corporation pic.twitter.com/zGCw3dOW4R

Suryan in a letter to SDMC Commissioner Gyanesh Bharti on Monday had said that “religious beliefs and sentiments of devotees are affected” when they come across meat shops or “have to bear the foul smell of meat on their way to offer daily prayers to goddess Durga.”

Meat shops will not be allowed to open from Tuesday during Navratri till April 11, he had said, and asked the municipal commissioner to ensure strict adherence of his directives.

Aggarwal also asked to traders to keep meat shops closed during Navratra in view of “religious sentiments” of the community.

“I held a meeting today with senior officials, and in keeping with the religious sentiments of people, have appealed to traders to keep meat shops closed during Navratra, or at least on the last three days of the festival,” he said.

The East Delhi mayor said, every year on the last three days of Navratri, the Ghazipur slaughterhouse is closed, and this year it will be closed on April 8-10.

“So, it means if anyone is selling meat (of buffalo or goat) in this period, it would be either stale or slaughtering done through illegal means. So, I have ordered that 16 teams be formed to keep a very watchful eye on such traders, and take actions accordingly,” Aggarwal said.

“Actions will include seizure of meat or imposition of challan or even revoking if license or sealing of shops, as per the situation,” he said.

Meat shops in several markets in south Delhi, including at INA and at Jor Bagh, remained shut on Tuesday, fearing action by authorities.

There are around 40 meat shops in the INA market, and some owners said that the decision to keep shops closed was taken after Suryan’s remarks.

“The (meat) shops at the INA market are closed fearing action by authorities. Yesterday, the SDMC mayor announced in the media that strict action will be taken against those opening shops during Navratri. We have decided among ourselves to close our shops for today,” Sanjay Kumar, manager at Bombay Fish Shop, said.

Kamal, co-owner of Pigpo meat shop in Jor Bagh, said he had opened the shop in the morning but after learning about the mayor’s statement, decided to close it.

“We opened the shop in the morning but have shut it after we got to know that shops in nearby markets are closed,” Kamal said.

This is the first time when the civic body has asked for the closure of meat shops under its jurisdiction during Navratri which is being observed from April 2-11.

BJP leader amps call amidst opposition and others’ criticism

As the move triggered sharp reactions on social media, BJP MP Parvesh Sahib Singh Verma said such a restriction should be imposed all over the country during Navratri celebrations.

Verma is known to make comments against Muslims. During the Shaheen Bagh protests of 2019 against the Citizenship Amendment Act, he had called the protesters “rapists and murderers”

Meanwhile, National Conference leader Omar Abdullah hit out at the SDMC mayor, tweeting, “During Ramzan we don’t eat between sunrise and sunset. I suppose it’s OK if we ban every non-Muslim resident or tourist from eating in public, especially in the Muslim dominated areas. If majoritarianism is right for South Delhi, it has to be right for J&K (Jammu and Kashmir).”

“I live in South Delhi. The Constitution allows me to eat meat when I like and the shopkeeper the freedom to run his trade. Full stop,” she said.

Several on social media panned the move, many expressing that it is ridiculous

I'm a Hindu & eat non-veg almost daily. Didn't know what Navratri is before I came to Delhi. Ban on meat shops during Navratri is ridiculous in a democracy, where 70 per cent are non-veg. Even in Delhi. I'm no less Hindu for consuming non veg during Navratri. pic.twitter.com/zXF2QmBDk4

South Delhi has proved that more than being classy and hip, it's communal.
I live in South Delhi and I m ashamed of this illogical act. #meatban

Communal riot, attacks on livelihoods, Dharm Sansad calling for genocide & now meat ban – limits of India’s selective rule of law are being tested in Delhi, no less. It’s a deliberate undermining of national capital to reduce it to an apartheid city & send a message to nation.

There are many Muslims who can't afford online meat shopping at Licious etc.
For their iftar requirements they would depend on neighbourhood meat shops.
Meat ban will hit them most.