At Uri, Ground Zero of India-Pakistan Tension, Villagers Are Fleeing in Panic

“We don’t want to relive those horrifying times. Why can’t India and Pakistan allow us to live in peace?” 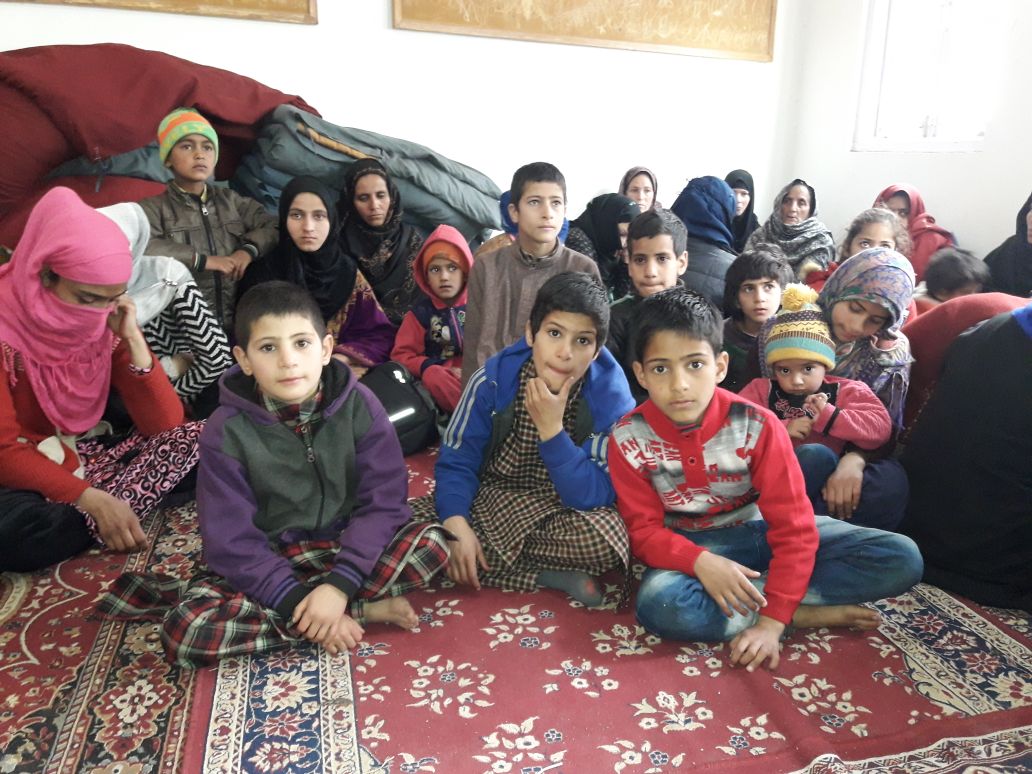 A group of children from the affected border villages in a classroom in the girls higher secondary school, in Uri town, which has been converted into shelter. Credit: Mudasir Ahmad

Uri (J&K): Shabir Khan shudders as he recalls the early Saturday morning horror when his house shook due to intense shelling of his village by the Pakistani army. Then, after a brief lull, he heard announcements made from across the Line of Control (LoC) on the public address system, asking families in Silikote, on the Indian side of Kashmir, to leave the village “without wasting time”.

Alone at home, 43-year old Khan rushed out to see what was going on. There was chaos all around. The entire village – men, women and children – had already started climbing down the treacherous mountainous track, past the main gate to Silikote, manned by soldiers, to run for their lives. Khan was the last man to flee the village, around ten kilometres from border town of Uri.

“I haven’t seen such intense shelling ever in my life, not even before 2003 when guns would roar for days together on the LoC. for a moment I thought it is the end,” Khan told The Wire at the girls higher secondary school in the town which has been converted into a makeshift shelter for people from border villages affected due to shelling.

Khan said he had barely moved three kilometres out of the village when Pakistan army again resorted to heavy shelling.

Silikote is the last village on the LoC with Pakistan and lies opposite the mountainous villages of Khawaja Banday, the last habitations on the Pakistan side. Separated by a gushing stream that flows from Pakistan into Uri, the village, with a population of about 200 people, is watched over by army soldiers round the clock from forward posts.

Tension mounted along the LoC from February 20 when the Pakistani Army killed a BSF jawan on the de-facto border in Kupwara district. In retaliation, the Indian army “destroyed several army pickets” on the Pakistan side, leading to a flare up that has now spread to the LoC on the Uri.

Silkote is not the only village that has seen such high levels of mass migration since the 1990s, after the Pakistani army targeted civilians.

At least 12 villages dotting the border, like Churanda, Tilawari, Batagram, Shoura and Hathinang, have faced Pakistani shelling and firing since February 23. 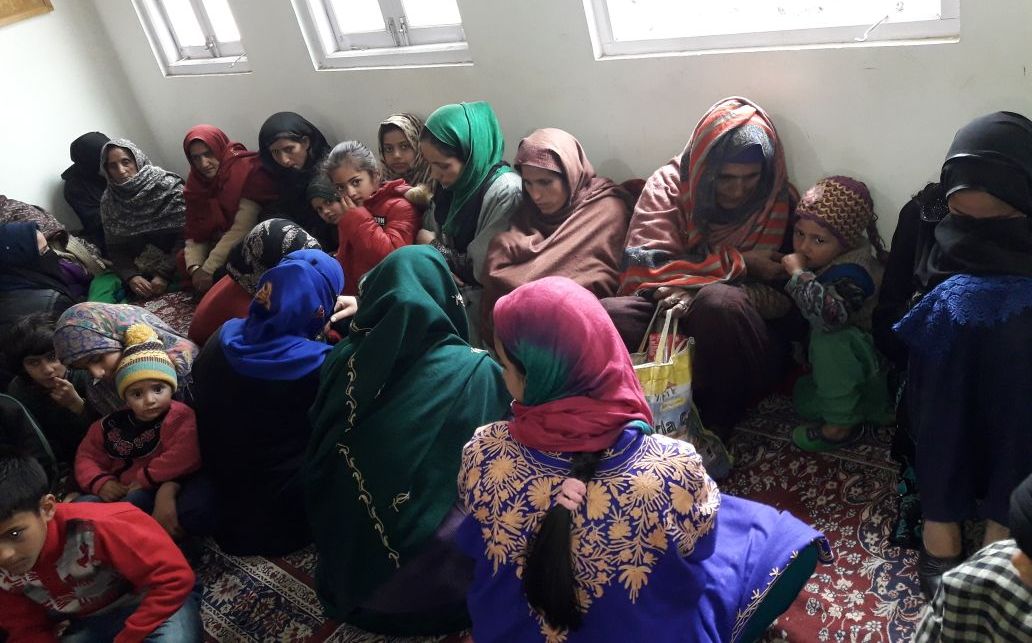 Women from the affected border areas await good news from their villages affect by shelling from across the LoC. Credit: Mudasir Ahmad

A total of around 2,500 people have fled these villages, some of them totally emptied, and have been shifted either to the higher secondary (school) or have gone to their relatives houses, said sub-divisional magistrate, Uri, D. Sagar Doifode.

Irshad Ahmad Mir, who lives in Churanda with his family, considers himself lucky for making it out of the firing range. The Mir family have been victims of Indo-Pak hostilities for some time now.

In November 2001, a shell fired from across the LoC hit Mir in the leg. The injury was so grave that his limb had to be amputated to save his life. Two years later, in September 2003, Ahmad lost his mother, Saja Begum, when she was hit by a bullet while she was grazing cattle in a field in the village that faces the forward post from the Pakistani side, with a population of about 1,500 people.

“We feel like we are reborn today. Words fail me to explain how we managed to save ourselves as shells continued to land in our village, some of them hit the houses,” said Mir’s younger sister Rubeena Jan.

However, many families who live close to the “zero line” are still stranded in some of these border villages as, according to the villagers, the continuous shelling and firing from the Pakistani side didn’t allow them to move out of the houses.

One such family is that of Talib Hussain of Shoura. The family, according to Riyaz Ahmad, Hussain’s nephew, and seven other families, is still stuck in the village.

“We have lost contact with them and are now concerned about their safety,” said Ahmad who, along with his family of five members, has shifted to the higher secondary school.

The sudden flare-up on the LoC seems to be spinning out of control as armies from both sides on Saturday exchanged heavy artillery for the first time since 2003 – when the neighboring countries entered into ceasefire agreement.

The Uri subdivision comprises around 1.25 lakh people and in case of any escalation on the 720 kms-long de-facto border, more than 50,000 people from over 55 border villages, circling the main town, are directly impacted. The town is surrounded by the LoC on three sides.

In the last two days, three civilians have been injured and at least five houses have suffered “severe damage” in twin villages of Silikote and Churanda.

An official at the sub-divisional magistrate’s office said the situation escalated from Thursday, and on Saturday morning they received panic calls from these border villages seeking help for evacuation. The situation forced the administration to press into the service ambulances and government vehicles to ferry people from some border villages. 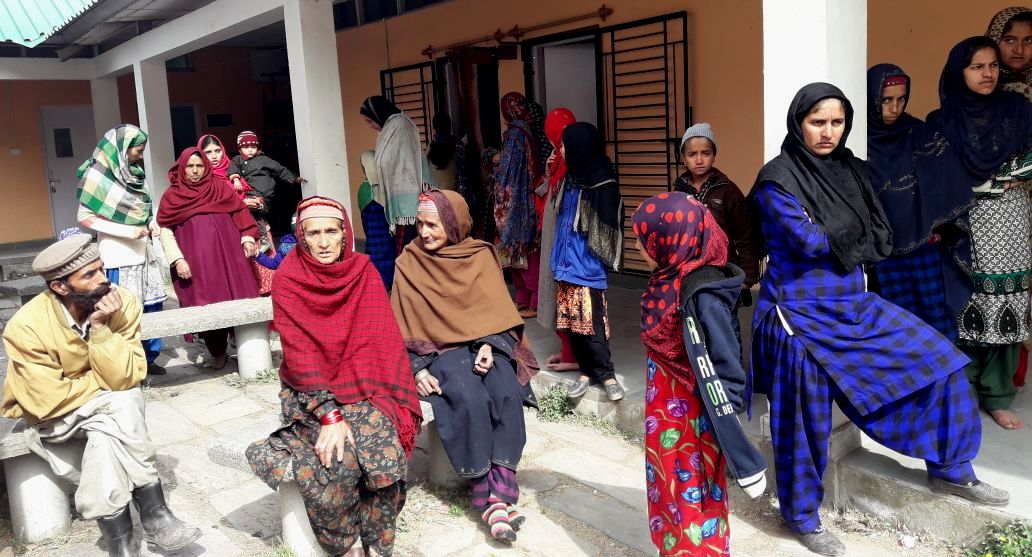 A group of people from border village of Silikote outside the girls higher secondary school in Uri town. Credit: Mudasir Ahmad

“It is an emergency-like situation, the biggest displacement in terms of numbers in the last around 28 years. Our entire focus is on saving the lives as we fear that the situation might worsen in the coming days,” the official said, confirming that there had been announcements made on the loudspeakers from Pakistan side.

This situation has forced the administration to set up an emergency control room in the town to deal with any eventuality.

The villagers too fear for the worst while referring to these “threatening” announcements. “I don’t recall any such announcement made in the past. This is a sign of tough times to come,” said 67-year old Razak Kahn of Churanda.

Amid intermittent rainfall since Friday, the villagers are worried about their children, though the local administration has arranged for a community kitchen and made arrangements for heating.

The sudden migration also means that people were forced to leave behind everything, including livestock and houses they had struggled to build post the ceasefire agreement, and nobody knows how long the situation will remain tense.

“We couldn’t even take a second pair of clothes with us. This should tell you how bad the situation is back in our villages,” said Rafeeqa Begum, who, along with her husband and four children, is putting up in one of the classrooms in the shelter school.

With the long-held peace agreement between the nuclear-armed rivals, India and Pakistan, being torn apart by guns roaring from both sides along the LoC and the international border in Jammu, the immediate worry for these villagers is, what if the situation slips back to the pre-2003 era?

“We don’t want to relive those horrifying times. Why can’t India and Pakistan allow us to live in peace?” asked Begum.