He tried creating his own world almost wholly made up of people drawn from Goa, but Lutyen’s Delhi had its own inexorable ways of breaching his citadel from time to time 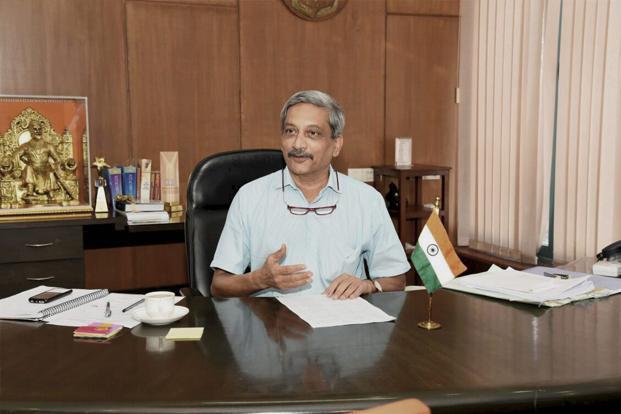 Goa chef minister Manohar Parrikar had it in him to be amongst India's distinguished Raksha Mantris. Credit: PTI

The BJP’s gain in the recent electoral battle has, in a way, been the nation’s loss. Arun Jaitley has been given the additional charge of the defence ministry but it isn’t the same as having a regular raksha mantri and, in particular, with a Manohar Parrikar at its helm.

I’m not aware of the games that are played on the political chessboard – in this case, the BJP’s – but looking from the confines of the defence ministry, sadly I can’t think of anyone in the ruling party who can remotely match Parrikar’s intellectual brilliance and penetrating insight into the vastly complex issues that confront the ministry.

Parrikar was new to the national scenario when he, much against his wishes, was made the defence minister in November, 2014. He was new to the Union government, to the murky world of Delhi’s politics and to the even murkier world of defence deals. The defence ministry is vast and humongous. The issues at stake are complex and roiled in tangles of rules and procedures. Decision-making is layered and at the same time labyrinthine. Each of the services has its very own shibboleth and reading a few sentences on a file will make clear the so-called minefield of lingo that one is likely to trample upon.

But Parrikar acquitted himself well – and rather quickly. About six months into his term when, as the controller general of defence accounts, I met him for the first time to discuss the pesky and complex issue of OROP, I discerned his clear understanding of the subject. All the three services chiefs were present at the meeting, as were senior bureaucrats of the ministry. Parrikar seemed to have all the facts of the case, intricate as they are, at his fingertips. He gave everyone a patient hearing, probing the issue deeper, thinking along as he hammered out the necessary calculations almost concurrently.

Soon after, when I moved over to the defence ministry, I saw more of the same on any issues I discussed with him in his chamber or in the many meetings he chaired. He was a hands-on minister like no other. He was quick, but behind his quick decision-making lay a mind that had reflected long and hard on crucial aspects of the issue. He was a brainiac who would dissect procurement cases, and expatiate at length on the pros and cons in the Defence Acquisition Council (DAC) meetings as if he was slowly peeling off layers of an onion. But he granted every official their right of say, no matter how much he disagreed with them. He knew his every move was under media scanner and the ubiquitous defence lobby, but he was firm and open in his conviction.

But more than anything that I saw during my tenure was when the new defence procurement procedure (DPP) was a work-in-progress. Of the many discussions we had in meetings, including in the DAC, the meeting of eight-ten senior officers of the ministry and services headquarters that Parrikar called for us to hammer out the DPP clauses is etched in my memory. The meeting went on for a good six hours. What to my mind still rings loud is the new concept of evaluation that he brought to play on the ‘essential and enhanced’ parameters in the services qualitative requirements granting nuances to the progressive, pragmatic way for single vendor situations in the DPP. “Essential Parameters – A and Essential Parameters – B (if applicable) are non-negotiable requirements to be met by the vendor, prior to commencement of equipment delivery. Essential Parameters – B to be used only when required, with DAC’s approval and not to be used when two or more vendors claim to possess the same at the RFI stage and not to be included in ab-initio single vendor cases. Essential Parameters – B may also be incorporated in the SoC, for provision of partial quantities of the items being procured, to meet different/higher specifications for specific operational requirements.”

This is no place to elaborate on other issues he wished to institutionalise in India’s protracted and scam-laden defence procurement procedure, like the concept of reverse LD to fast track cases in the ministry, but I can’t help alluding to his ability to see and weigh both sides of the coin and provide a transparent level-playing field to all. He certainly played a crucial role in pushing the government machinery to move faster than it has in decision-making.

Not that we didn’t have our share of disagreements on various issues and his dilly-dallying (the Indian Ministerial filibustering; I called it Parrikaring!) on many others. As a politician he flip-flopped at times; but given our societal value system and cohort pressures, and the times and ethos we live in, plus that he was a relative newbie in the arcane world of the government of India, graduating as he was from the corporation (coined from a friend) of Goa, I’m prepared to grant him the benefit of flip-flops. Cases that have haemorrhaged public funds for years and continue to do so, which he understood very well, readily come to my mind and with immense sadness. But notwithstanding that, I’ll always admire his cerebral sparkle and the hard yards he put in, his focus on Make-in-India that put LCA on centre-stage and the encouragement that he unstintingly provided to Aeronautical Development Agency and the DRDO.

Critics often complained that the Make-in-India project in the defence sector had failed to take-off. Sadly they fail to grasp, given our ecosystem, how tough it can get, how protracted the procurement of arms and weapons/platform are, and how long it takes to show results. The same goes with the recent criticism of the parliamentary standing committee on inadequate defence budgetary outlay. The expectations are immense but so are the imponderables, not to say anything on the need to appreciate the nation’s budgetary outlay in a holistic vein. Anyone who has dealt with issues knows the periodic pitfalls of achieving milestones and the payouts.

Commentators are also often wont to rile against the lower budgetary allocation towards the defence sector. To me though the reference to percentage of GDP is so misplaced that I find this betrays a complete lack of appreciation of the algorithm of a nation’s growth model. To cite a simple example: if a human body requires ‘x’ calories for an optimal life, must greater prosperity mean a greater/higher calorific intake? Common sense says no – it’ll be asking for trouble. The same too goes for the nation and its insurance mechanism. This is not even taking into account the available pool of resources that funds all areas of national development and sustenance. Frankly, I can see no correlation between the defence budgetary outlay and the GDP unless of course we wish to get carried away by the western world’s paradigm of comparative national defence outlays that SIPRI, among others, does. Incidentally, even SIPRI includes pensionary outlay as a part of defence outlay, which the learned commentators disavow and, instead, hammer out their insular architecture.

Parrikar learnt and inhered these issues rather well. He treaded cautiously, as a sensible man would, on issues of strategic partnership that carries in its womb plenitude of ramifications, both for the present and the future. This heaped infinite frustrations on the industry and the industry-driven media ever keen to swoop down on the slightest flaw. The only flaw I can discern here is Parrikar’s penchant to shoot his mouth off on such issues rather than holding back.

But how “correct” was it for Parrikar to leave the ministry and go back to his home turf? It is not for me to go into political calculations, but that he upped and left suddenly after doing the hardest part – understanding the DNA of the ministry that takes years to fructify and show results; the machinations and vacillations in its everyday functioning; the many flawed past trajectories; the many countervailing dynamics and interplay of personnel/middlemen/defence and civil bureaucracy et al – is unfortunate.

He left when he ought to have stayed put.

Columnists have opined that unlike other politicians he wasn’t fond of money, but he loved power in an architecture where he was the numero uno. Far from the general public perception of his ineffable ordinariness and beneath his plebeian visage, he was hubristic and won’t let go a chance to so adumbrate.

Also, coming to Delhi after years of helming the tiny city-state, the overwhelming world of Delhi may have underwhelmed his overweening psychology and worldview. He tried creating his own world almost wholly made up of people drawn from Goa but Lutyen’s Delhi had its own inexorable ways of breaching his citadel from time to time. His periodic, resuscitative visits to Goa didn’t exactly help his cause to carve out a niche in India’s capital.

He longed to get back to Goa. I sensed his heart was in Goa but his head was in Delhi – so well he had understood the defence ecosystem to lead from the front. Notwithstanding these foibles and his many gaffes, which likely would’ve ironed themselves out, he had it in him to be among India’s distinguished raksha mantris. While his party’s political calculations and internal dynamics are theirs, India doubtless needed him more than Goa did.