The armed group, which has entered a ceasefire agreement with the Centre, has overground camps.

New Delhi: Following objections from “many valley based” civil society organisations (CSOs) in Manipur, the state government has written to the Ministry of Home Affairs (MHA) seeking directions to remove the “unauthorised camps” of the Naga armed group – NSCN (Isak-Muivah) – from Manipur, and “relocate (them) in (to) Nagaland”.

The Central government has had a ceasefire agreement with the NSCN (I-M) since the past 22 years, as per which the armed group’s camps holding cadres are over ground and are termed ‘designated camps’ by the MHA, pending the signing of a peace deal. The biggest such camp is also the NSCN (I-M) headquarters in Hebron (Dimapur) in Nagaland.

Though former prime minister I.K. Gujral had once clarified in parliament that the ceasefire agreement extended only to Nagaland, there had been some amount of ambiguity about it. While the Manipur government and the CSOs working for the interests of the Meitei community quote the 1997 agreement, the NSCN (I-M) quotes a 2002 agreement that extends the agreement “without territorial limits”.

During the Atal Bihari Vajpayee regime, the Central government had agreed, for the first time, to sign a ceasefire agreement with NSCN (I-M) “without territorial limits”. However, it sparked massive protests by CSOs in the Meitei-dominated valley areas of Manipur. Following a meeting with the chief ministers of northeastern states, the then home minister L.K. Advani decided to extend the limits only to the state of Nagaland.

However, the NSCN (I-M)’s ability to enter into a ceasefire agreement with the then NDA government without territorial limits was considered a huge temporary success for the outfit as it had been demanding unification of all Naga inhabited areas of the northeastern states. The Centre had to take a step back following objections, mainly by Manipur. NSCN (I-M) chairman T. Muivah, so also most top rung leaders and cadres of the outfit, come from the Naga belt of Manipur, mainly the Kamjong and Ukhrul districts bordering Myanmar.

Though NSCN (I-M) claims the agreement renewed in 2001 doesn’t mention any territorial limits, security forces, from time to time, have been engaging in operations against NSCN (I-M) in states other than Nagaland. The I-M group is active in the Naga dominated districts of Manipur and some districts of Arunachal Pradesh. 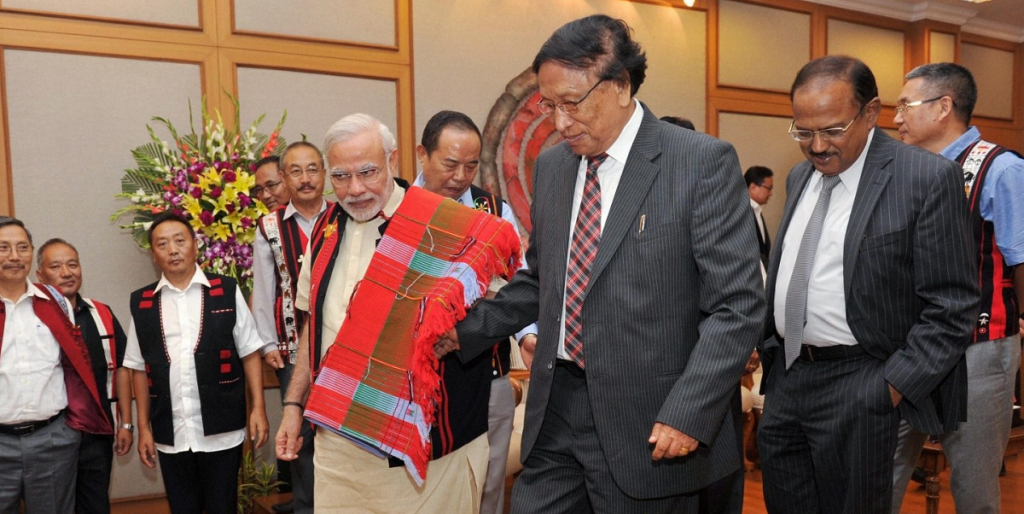 This past May 14, in a letter written to the union home secretary Ajay Kumar Bhalla, Manipur chief secretary J. Suresh Babu pointed out that such camps, in spite of the ceasefire agreement extending only to Nagaland, “exist in the jurisdiction of the state (Manipur) under the name of Taken Note of Camps.”

Accusing the NSCN (I-M) of carrying out “illegal activities” in those camps, the state government said it has raised objections to the presence of those camps “on many occasions”. The letter claimed that such camps have become “a subject of social tensions all the time”.

Without naming any organisation, the chief secretary’s letter said, “Many valley-based CSOs [implying those run by the Meitei people, the majority population in the northeastern state] are raising open objection against the open and illegal activities of the B+NSCN (IM) and the state government is seriously concerned about it”.

The BJP-led state government also sought a directive from the MHA to the Army and the Assam Rifles “to control the activities of the NSCN (I-M) and prevent public and civil society organisations from visiting these camps.”

“Of late, a large number of civil society organisations are openly invited to these camps and these videos are put (on) social media, inviting criticism from public and also causing embarrassment to the state government,” the letter said.

In response to the letter, the NSCN (I-M) issued a statement on May 20, reportedly naming United Committee Manipur (UCM), a powerful Imphal-based CSO, to be behind the move as a “spiteful” campaign against the outfit and the Nagas in general when the entire world was fighting the coronavirus pandemic.

The outfit yet again claimed that the ceasefire agreement “covers all Naga territories”, stating, “This spirit has guided the 22 years of the Indo-Naga political talks throughout. This was this mutual understanding and respect that has carried the talks this far.”

This past April, the Dimapur-based Newmai News Network had published a report quoting from a statement of the NSCN (I-M) that the then chairman of the ceasefire monitoring group (CFMG) Lt. Gen. R.V. Kulkarni had authorised the outfit to set up a designated camp in Kangkhui-Shirui forest in Ukhrul district of Manipur in 2007. It said the MHA was informed about the authorisation.

In a statement issued on April 26 in response to the news report, the UCM accused the Central government of “betraying the people of Manipur”. It reportedly said, “For years, the government has been denying existence of any designated camps of NSCN (I-M) in the state. However, the secret is out in the public and remaining silent now will only invite a public movement from the people of the state and UCM”.

In May last year, security forces, with help from CFMG, persuaded NSCN (I-M) to remove one such camp from Sahai village in Manipur’s Ukhrul district, situated close to the Myanmar border.

The Naga peace process under the framework agreement signed by NSCN (I-M) with the Narendra Modi government in August 2015 has been continuing and is yet to reach a deal.