Police had reportedly been on the lookout for 24-year-old Shariq for months before the November 19 Mangaluru blast, who they claim had been sharing content on the Islamic State and radicalising other youths. 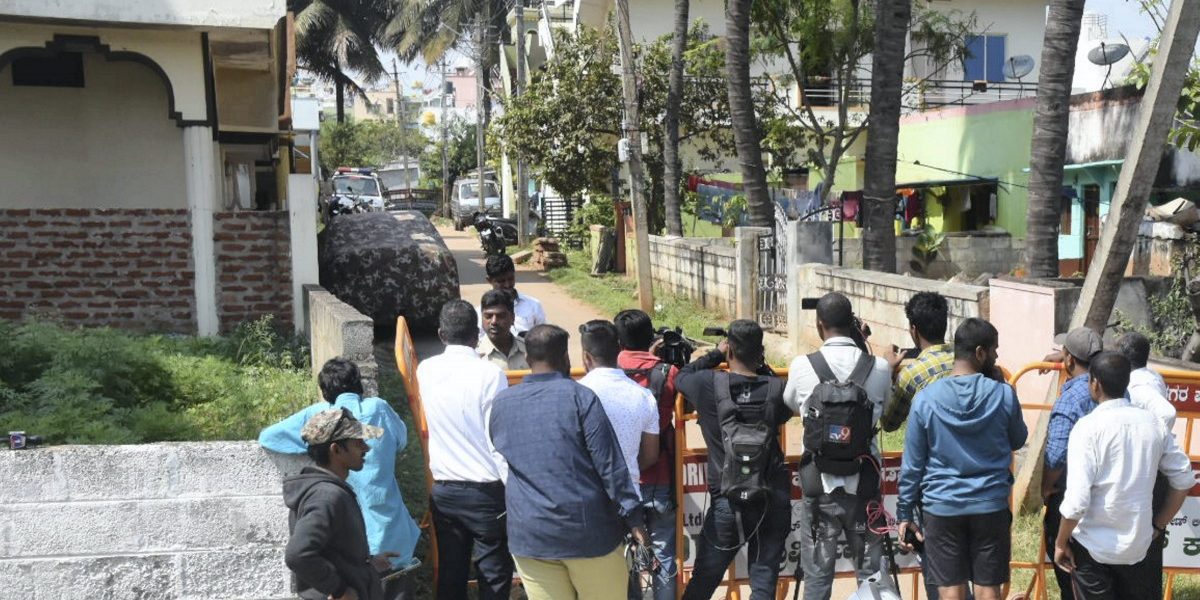 Police investigate at the residence of the accused involved in an explosion in an auto-rickshaw in Mangaluru on Friday evening, in Mysuru, Monday, November 21, 2022. Photo: PTI.

New Delhi: Karnataka police have linked 24-year-old Mohammad Shariq, the suspect in the November 19 autorickshaw blast in Mangaluru, to the stabbing of 20-year-old Prem Singh in Karnataka’s Shivamogga on August 15 this year.

Shariq is accused of putting together the improvised explosive device (IED) which accidentally went off while he was in an autorickshaw in Mangaluru on November 19. After suffering 40% burns on his body from the accidental blast, Shariq was admitted to hospital.

However, a report in the Indian Express quotes police as having said that they already had information that suggested that Shariq was trying to assemble explosives and that they had got this information while investigating the Shivamogga stabbing.

Communal clashes had erupted in the district on Independence Day this year, reportedly over posters of Hindutva icon V.D. Savarkar and Mysuru ruler Tipu Sultan. Thereafter, 20-year-old Prem Singh, who was not part of the initial clashes, was stabbed.

Upon interrogating Jarbi and going through his mobile phone, the police reportedly discovered that he had been receiving information on extremist group, the Islamic State (IS) as well as video tutorials on how to put together IEDs. And, speaking to the Express, police sources stated that it was Shariq, the suspect in the Mangaluru blast, who had been trying to radicalise Jarbi.

The police further told the newspaper that the statement of the accused in the stabbing case had led the police to file another case under sections of the anti-terror law, the Unlawful Activities (Prevention) Act (UAPA) and consider Shariq as an accused in the case.

Another police officer told the paper that the videos on how to assemble IEDs had been sent to Jarbi by Shariq.

In September, the Express had reported that the Karnataka police had arrested two of Shariq’s associates – 21-year-old engineering graduates Maaz Ahmed and Syed Yasin – for tinkering with explosive devices and were on the lookout for Shariq himself.

At the time, the police had claimed that Shariq was engaged in radicalising his associates by sending content related to IS, assembling explosives and “fundamental ideas and concepts of jihad” over Telegram on a channel allegedly run by the IS’s media centre.

Shariq and Ahmed had also previously been arrested by the police in 2020 for spraying pro-extremist graffiti on the wall of a police station and remained behind bars for eight months, according to the report.

The police even said that the three had purchased materials to create IEDs over the internet and in Shivamogga itself, including timer relay circuits, nine-volt batteries, switches, wires, and other explosive materials.

Further, the three reportedly even conducted a “successful” test blast in Kemmangundi on the banks of Tunga river in Shivamogga and had stored explosives for the future.

Due to this information, the police was reportedly already on the hunt for Shariq before he arrived in Shivamogga, where subsequently, an IED exploded in his lap. Since then, police have reportedly started analysing the materials on Shariq’s mobile phones.

However, the police have not yet been able to question Shariq to ascertain the exact motives behind the November 19 blast.