Is Maharashtra Showing the Way for the State to Reclaim its Role in Healthcare?

By capping prices for COVID-19 treatment in private hospitals, the government is paving the way for some much-needed regulation. 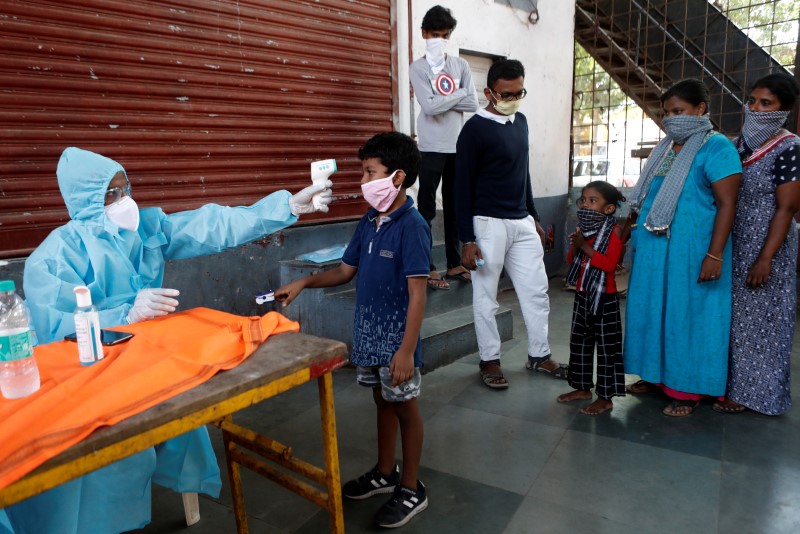 A healthcare worker checks a boy's temperature with an infrared thermometer at a camp in Dharavi, one of Asia's largest slums, during an extended lockdown to slow the spread of the coronavirus disease (COVID-19), India, May 29, 2020. Photo: Reuters/Francis Mascarenhas

In the first of its kind of moves in COVID-19 management, Maharashtra issued a directive on May 21 to all charitable hospitals saying that 80% of their operational bed capacity will be regulated by the rates provided by the state till August 31.

While many state governments have announced taking over private sector hospital for pandemic preparedness, their attempts to involve private sector have been restricted to either a few hospital facilities or a few beds in select private health facilities. Maharashtra’s move, along with other initiatives regulating the participation and functioning of the private sector, holds huge promise for the state to reclaim its shrinking role in health governance and effectively steer the private sector in health.

Steering private sector under the ambit of the BMC

Maharashtra is the second largest Indian state in terms of population and is highly urbanised, with 45% of the population residing in urban areas. As of May 25, it is one of the most severely hit states with 36,040 active COVID-19 cases out total 93,322 cases in India.

While the importance of regulating the private sector in managing this pandemic was recognised quite early, the Maharashtra government has come up with strong policies to effectively steer this sector.

Maharashtra witnessed its first COVID-19 case on March 9 and within three days, on March 13, with nearly 15 positive cases, Maharashtra’s chief minister Uddhav Thackeray during the state legislative assembly declared the COVID-19 outbreak as an epidemic and invoked the Epidemic Diseases Act, 1897 in five cities: Mumbai, Navi Mumbai, Nagpur, Pune and Pimpri Chinchwad. The government soon started preparing to equip testing and treatment facilities to manage the epidemic. With only three testing facilities in March, by the first week of April, by roping in the private sector, it managed to reach close to 15 laboratories in total.

Amid these preparations, during the first week of April reports started emerging that large private hospitals in Mumbai including Wockhardt, Jaslok ,Bhatia, Hinduja Khar, and Breach Candy were not taking any new patients after healthcare staff were exposed to the disease. A few other private hospitals were reported to be overcharging patients, with the costs going up to between Rs 50,000 and Rs 1 lakh for a single day of treatment or Rs 2.8 lakh being charged as ‘COVID charges’.

In order to address these complaints and prevent healthcare providers from hiking charges during the COVID-19 pandemic, on May 1, the Maharashtra government issued a notification to cap prices of medical procedures in all private and charitable hospitals under GIPSA-PPN (a preferred provider network which is a group of four public-sector general insurance companies which have restricted their cashless service only to hospitals that accept standardised price bands for over 100 specified procedures).

This was an exemplary move. Top officials like state health minister Tope and Dr Sudhakar Shinde, state Health Assurance Society head, were reported to be warning the private sector of stern action in cases of non-compliance. Nursing homes, dialysis centres and clinics were also asked to open their services and Central and Western Railways were reached out to, to convert train wagons into isolation facilities. Patients were asked to complain on official email addresses of district collectors if they face issues of overcharging in hospitals.

This was followed by another order issued by the Brihanmumbai Municipal Corporation (BMC) on May 3 which authorised assistant commissioners at the ward level in Mumbai and sub-urban regions to take possession of private hospitals and nursing homes under their jurisdiction to designate any of these health facilities as COVID-19 treatment centres. In a first again in Maharashtra, BMC commissioner Praveen Pardeshi granted permission to revive a private hospital project (Sunrise Hospital on Lal Bahadur Shashtri Marg) in Bhandup to cater completely to frontline workers including health and police staff.

In another interesting move, on May 6, T.P. Lahane, Director of Medical Education and Research, Mumbai, wrote to nearly 25,000 private medical practitioners in Mumbai to compulsorily render their services for the prevention and treatment of COVID-19 patients for at least 15 days. Non-adherence was to be considered as breach of the MCI Code of Ethics and called for strict action (including revocation of their license to practice).

However, on the other side, around May 6-7, videos posted by a BJP MLA went viral about poor performance of public hospitals like Sion and KEM, showing images of patients sleeping next to dead bodies wrapped in black bags on one hand and the exorbitant rate cards of ‘COVID’ charges in the private hospitals on the other hand.

To address these emerging issues, Dr Pradeep Vyas, principal secretary Maharashtra government, issued the much discussed radical directive on May 21 to charitable hospitals asking them to i) increase their bed capacity and accommodate maximum number of  patients and ii) 80% of the operational bed capacity in these hospitals will be regulated by the rates provided by the state.

Historical underpinnings: context of growth of private sector in Maharashtra

Before applauding or criticising this move, it is important to understand the chronic neglect and emaciation of the public health sector and the role played by the state in promoting a humungous unregulated growth of the private sector in health in Maharashtra.

Maharashtra’s investments in strengthening public health systems have not only been minimal but also seen a decreasing trend. For example, BMC budget allocation for the public health system fell from 25-30% up until 1990, to 9-10% around 2018. Similarly, the state government’s annual health budget for 2020-21 (4.3% of its expenditure) has been lower than the average allocation for health by the other states (5.3%).

The private health sector at large has seen exponential yet unregulated growth in India, rising from its mere 8% presence in total health facilities at the time of independence to occupying 60% of total health facilities by early 1990s. In the context of Maharashtra, in 1992 the Bombay Municipal Corporation listed 907 nursing homes and private hospitals in Bombay city alone (excluding Thane), and by 2018 that number reached to 1,319 hospitals and nursing homes.

Also read: Fighting COVID-19 on a Wing, a Prayer and an Acronym

There has been a clear mismatch between the patient burden and bed capacity in Mumbai, as almost 42% of municipal hospital beds are concentrated in the city’s apex institutes in South Bombay. With ill-located facilities not being able to optimise the triad of costs, waiting-time and treatment for the poor, BMC has been catering to barely 20% of its population despite of spending 25% of its budget on health.

This disparity in demand and supply of health services, especially for the poor, and growth in the private sector has been facilitated by the state. Under various reforms including the adoption of liberalisation policies in 1980-90s allowing for loans and investment for capital development; subsidising sale of land for healthcare projects; lifting import regulations for medical equipment; opening insurance sector to private investment; to lifting restrictions on foreign direct investment (FDI) allowing 100% FDI for health-related services under the direct route in 2000; the state has conveniently ignored the public sector and promoted the growth of private sector in health.

Reclaiming the role of the state in health systems

Many well-intended attempts of regulating the private sector like implementing the Clinical Establishments Act, 2010 , and standardising treatment guidelines and costs of medical procedures have been tried, but have proven to be ineffective in the past.

However, this unique move by the state government to regulate prices of medical procedures in private hospitals presents a unique opportunity to disrupt the way the health system is functioning in an urban megalopolis like Mumbai. It has created a potential for the state to reclaim its long-lost role in health systems governance and ensure universal provision of health services.

Also read: COVID-19 Is the Fine Line Between Public Health and Healthcare

At this moment, making private hospitals public for the duration of the pandemic is critical, yet it is still a temporary, emergency measure (that the state could take only through invoking different acts). A wider acceptance by the state for sustained investments in public health is needed to prepare public health systems to be resilient to respond to future health emergencies. These investments are a must to systematically steer the private sector, as radical emergency measures cannot count as a dependable strategy for future epidemic preparedness.

Nonetheless, the state must use this opportunity to strengthen its role, standardise medical procedures (and their pricing) across different health sectors and establish a clear role and accountability mechanisms for the private sector’s involvement in COVID-19.

Sumegha Asthana is a physician, health administrator and public health researcher by training. She is the India chapter lead for Women in Global Health (WGH) and a doctoral student at Centre of Social Medicine and Community Health, Jawaharlal Nehru University, New Delhi.