A day after thousands of migrants gathered outside Bandra railways station, the state government has booked several unidentified migrants and a TV journalist in three separate FIRs. 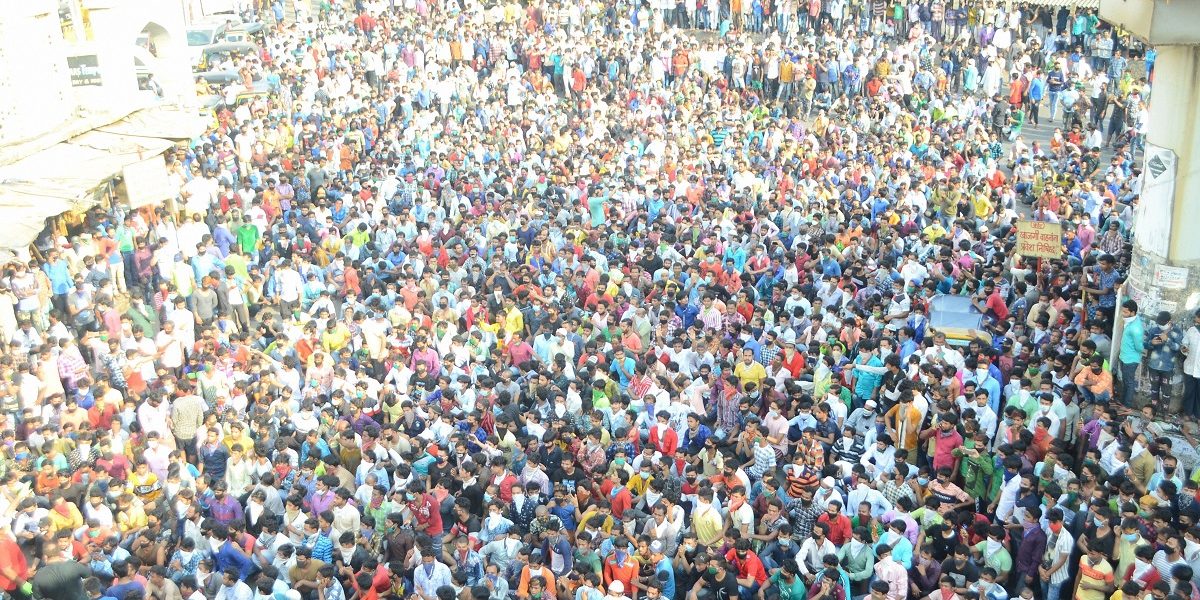 Mumbai: A day after more than 3,000 migrant workers poured onto the streets of Bandra in Mumbai in search of a train ride back to their homes, the Maharashtra state government has responded by registering three FIRs. Cases have been registered against a reporter of Marathi news channel ABP Majha for airing “unverified news”, against a political activist for “instigating people” and several other “unknown persons” for gathering at the railway station at the time when the state is under a complete lockdown.

The government has pushed the blame on the news report – even though the channel never even mentioned Bandra station or when any train service would actually start – and on the desperate migrant workers who took to the streets, but has not said if it has any concrete plan in place to ease the condition of the workers who are stuck in the state for close to a month without enough money or food.

According to news reports, the Osmanabad-based ABP Majha reporter Rahul Kulkarni was picked up from his residence and taken to Mumbai for further investigation. He was booked under IPC sections 117, 188, 269, 270, 505(2) of the Indian Penal Code, along with section 3 of the Epidemic Diseases Act, 1897.

The arrest is being seen by the media as the scapegoating of the journalist. Kulkarni, in his report on April 14 at 9 am had quoted a letter issued by a South Central Railway (SCR) official on April 13. The letter, which the railway now claims was only meant for “internal communication”, had proposed several measures that could be taken to ferry migrant workers from across the southern states back to their respective home states. Footwear lying on the road after after police action on migrant workers outside Bandra West Railway Station in Mumbai, April 14, 2020. Photo: PTI/Kunal Patil

South Central Railway (SCR) spokesperson C.H. Rakesh said that while the letter quoted in Kulkarni’s news report was “authentic”, it was only meant for “internal communications”. “The SCR, which covers a large part of Telangana, Andhra Pradesh, and some parts of Maharashtra, Karnataka and Tamil Nadu, had convened a meeting on April 13, during which several measures were discussed. These measures were mostly planned for the future in case the Central government were to ask us to suddenly make any arrangements. The letter does not mention that trains will be run,” Rakesh told The Wire.

The letter, however, stated:

“During video conference held on 13.04.2020, it is decided to run Jansadharan specials for clearing stranded passengers/ migrant labour of unreserved segment.”

The letter, signed by the deputy chief commercial manager of SCR, A. Malleshwar Rao, claimed that some divisions have already given data about migrants. While this letter was specifically for the SCR, Kulkarni in his live report claimed that the railways had taken measures to open trains from “every division” across the country. However, there was no mention of any station or time, which is why the government’s attempts to blame the reporter for the crowd near Bandra station is being seen as a knee-jerk response.

On Wednesday, the news channel issued an official statement on the issue. Kulkarni could not be contacted by The Wire.

Days before the national lockdown period was to end (on April 14), many state governments, including Maharashtra, had already decided to extend restrictions. In Maharashtra, chief minister Uddhav Thackeray had said that the state will be in a complete lockdown until April 30. 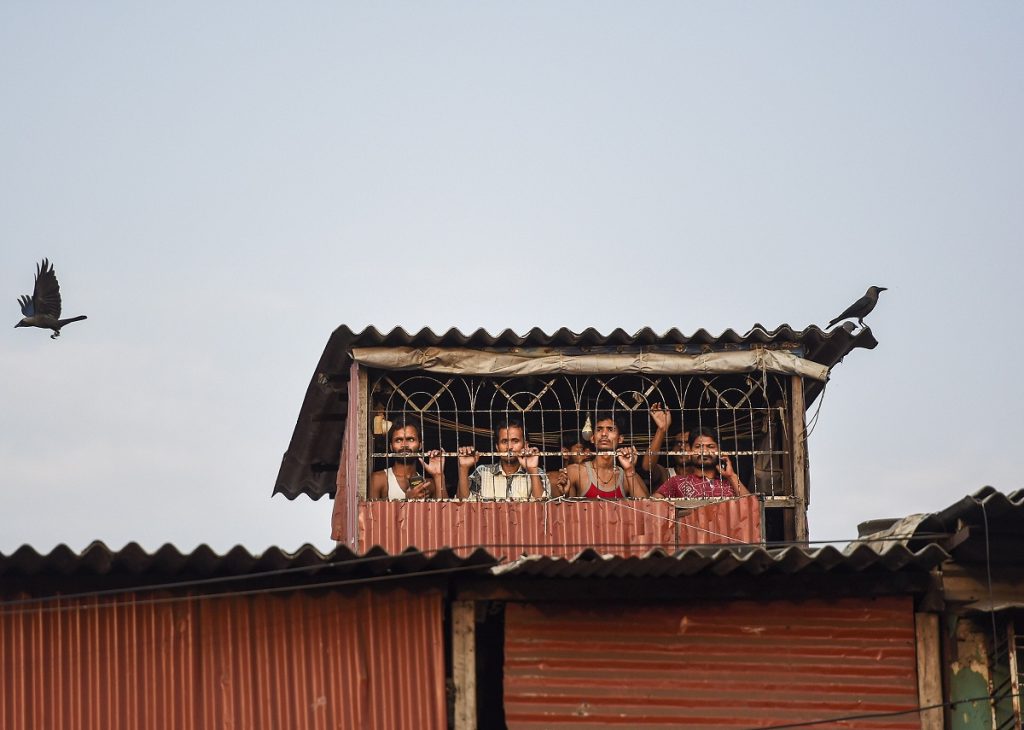 Families of workers look from their houses, after the extension of lockdown till May 3 in the wake of coronavirus pandemic, outside Bandra Railway Station in Mumbai, April 14, 2020. Photo: PTI/Kunal Patil

Until Prime Minister Narendra Modi announced that the lockdown would in fact continue until May 3, the Railways had opened online booking on the IRCTC app and website. The Railways spokesperson, however, has denied that the opening of booking could have been one of the causes behind the chaos at Bandra station. “The crowd that had gathered at Bandra station were mostly unreserved passenger. Those who had used the app and had made bookings were already informed through our automated messaging services. Also, we had waited for official communication from the government. Since the PM informed the nation about the extended lockdown until May 3, the railways have locked the app until further notice. Right now, only cancellation and refund are possible on the IRCTC website,” a Railways spokesperson told The Wire.

Besides Kulkarni, one Navi Mumbai resident named Vinay Dubey was also apprehended from his home and handed over to the Bandra police. He allegedly had posted messages on his social media account asking people to gather in large numbers.

Maharashtra home minister Anil Deshmukh has claimed that “11 different mehotds” were used to spread misinformation regarding commencement of trains.

Misinformation regarding commencement of trains from April 14, 2020 was spread using 11 different methods. The accounts have been tracked, FIRs are being filed & due legal consequences will follow.#StayAlertStaySafe #ZeroToleranceForRumors

The state government, so far, has only blamed the news channel, the workers and the Central government for the crisis that befell Bandra west railway station.

The current situation at Bandra Station, now dispersed or even the rioting in Surat is a result of the Union Govt not being able to take a call on arranging a way back home for migrant labour. They don’t want food or shelter, they want to go back home

Most of the workers, who live in slum settlements around the area, are from north and east Indian states. They had converged at the railway station hoping to make their way back to their home states. Their demands have been simple. “Arrange for travel back home.” The workers that The Wire spoke to soon after the incident on April 14 said they want to be back home because survival in the city was no longer possible. In several parts of the state, thousands of labourers have been stuck and have tried desperately to get back home.

But instead of quelling their anxieties, the police resorted to a lathi charge. And not just that, the Maharashtra police, along with brutalising them, have also criminalised their actions by filing an FIR against 800-1,000 “unknown persons”.

According to a PTI report, the police have arrested 11 persons including Kulkarni and Dubey in connection with the incident. Kulkarni and nine others will be produced before a court on Thursday. Dubey has already been remanded in police custody until Tuesday.

The situation also gave an opportunity for several news channels to communalise the situation. The fact that the Bandra station is situated near the Jama Masjid gave way to a “Muslim spin”, with news anchors asking, why were so many people gathered outside a Masjid after all? 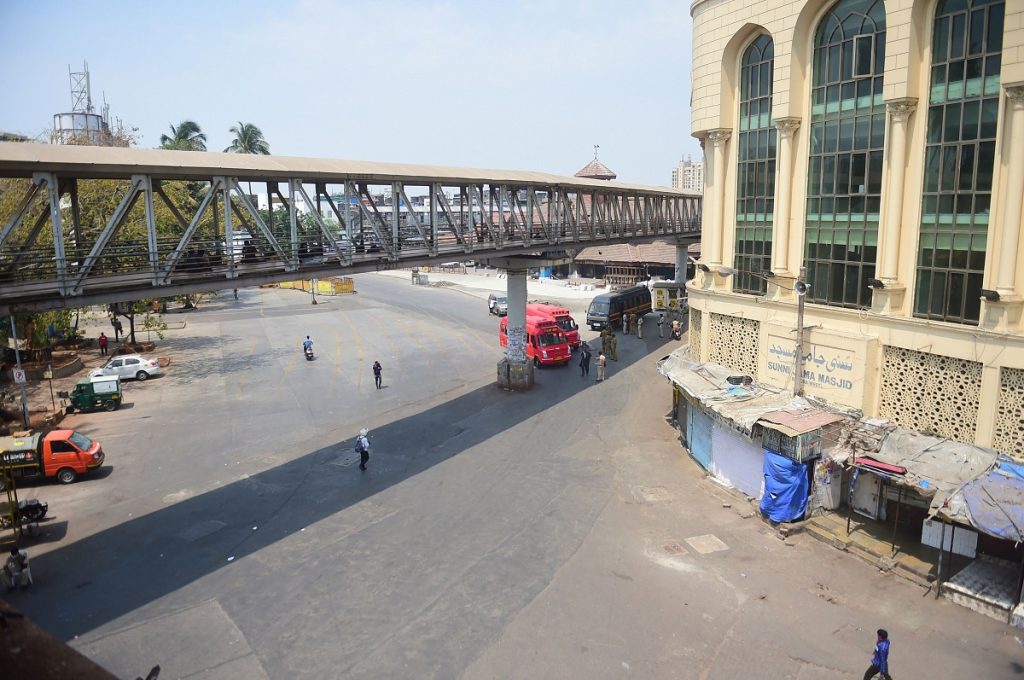 The Bandra West station and the Jama Masjid in Mumbai,. Photo: PTI/Shashank Parade

Rajat Sharma, editor-in-chief of India TV, who has over 4.3 million followers on Twitter wrote, “It is a matter of concern that such a huge crowd had gathered outside Jama Masjid in Bandra. Who had called them here? If they were returning home, why did they not carry their luggage?

It has over 22,000 retweets and was liked by close to 100,000 Twitter users. Deepak Chaurasia, consulting editor of NewsNation TV, asked why so many people were gathering outside a masjid.

The fact that the masjid was incidental, that the labourers were desperately trying to find a way back home and that the state and Central government had failed to provide any relief to them did not make it into TV debates.

ABP’s statement on the arrest of their reporter:

“There are several reports purporting to draw a connection between the gathering at Mumbai’s Bandra West station and a news story run on ABP Majha. The reports are entirely misconceived and are being circulated with the sole intention of baselessly maligning ABP Majha. Our news story was broadcast in public interest and on the basis of valid documents and information. Subsequent to the Hon’ble Prime Minister’s announcement at 10 am of the continuation of the lockdown and announcements thereafter from the Ministry of Railways with regard to cancellation of trains and refunds till May 3, 2020, we ran multiple stories, starting from shortly after the Railway Ministry’s announcement starting from 12:30 pm to 1:30 pm, on our channel clearly announcing that no trains will be running. There is no conceivable way in which the crowds that gathered at the Bandra West Station from around 3:45 pm can be linked to our stories.

“To insinuate that our running of the story and the updates thereafter amount to a criminal act is outrageous. We are shocked and dismayed that our reporter Mr. Rahul Kulkarni has been arrested in connection with the story. We will be taking necessary and immediate steps in law. We can say with full confidence that we have not deviated from practices of responsible journalism. Journalism and media are essential services. There is no denial of the Railway Ministry’s letter of 13.4.2020 recommending running of trains to return migrant labourers to their hometowns. We are a responsible and respectable channel running an essential service in providing information and news to society and community at large. We make every possible good faith endeavor to ensure the accuracy of our information and news from credible sources before broadcasting the same. Consequently, despite the morning news before the PM’s speech, shortly after the Railway Ministry announcement that no trains will run till 3rd May, 2020, we immediately started running the story on our channels as a responsible media institution.

“We would like to say that before journalists are arrested there should be due verification of all facts and circumstances.”