The police have charged five persons with serious offences under the IPC, including making "statements creating or promoting enmity, hatred or ill-will between classes" – for which they can be jailed for three years. 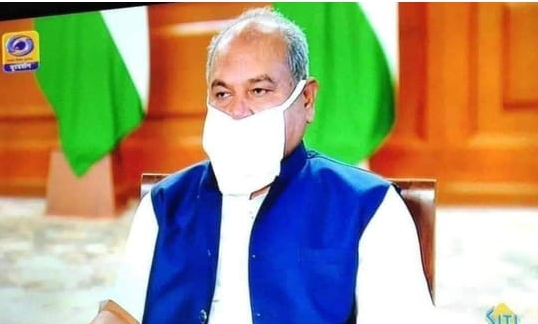 New Delhi: The Madhya Pradesh police has booked five persons, including three minors, for posting a Facebook comment on Union agriculture and farmers welfare minister Narendra Singh Tomar mocking the incorrect way in which he was wearing a face mask.

All the accused – Ajay Pratap Singh Sikarwar, Aman Singh, and minors AB, XX and YY* – are residents of Jaura village in Morena, which the Union minister represents in the Lok Sabha.

The five have now been charged under sections 188 and 505 (2) of the Indian Penal Code and Section 51 of the Disaster Management Act, 2005, (DMA) for their comment taking a humorous dig at the minister wearing a mask below his nose rather than covering it as is required

The IPC sections are related to disobedience of an order promulgated by an official and “statements creating or promoting enmity, hatred or ill-will between classes”. Section 51 of the DMA means that the accused persons attempted to obstruct a public officer from doing her duty.

The charges – evidently disproportionate, given the nature of the Facebook comment – were cleared by the head of the police in the district, an indication that either the minister, someone in his office or someone senior in the state government wanted to make an example of anyone mocking Tomar.

On April 24, the accused persons posted a picture of the minister with a face mask on, with a comment that read,

Translated, the lines mean, “This is the right way to wear a mask, learn something. This is Mr Narendra Singh Tomar. Brother, this is not an underwear, explain it to him.”

The comment was also suffixed with emojis of laughter, which indicated that it was posted only as a joke.

Curiously, the push to register a case against the accused persons came from the Morena superintendent of police Asit Yadav. The FIR, registered on May 3, says Yadav forwarded a complaint by one BJP worker Yash Sharma to the station house officer at Porsa on WhatsApp, asking him to initiate action against the accused.

The complaint by Sharma alleged that the accused misused the Union minister’s photograph, which had been clicked while he was advising farmers and village sarpanches on the necessity of masks and of taking adequate precautions to stay healthy at a time when the coronavirus was spreading.

The BJP activist then went on to say that that the Facebook post was “objectionable” and “insulted” not only the minister but all “people’s representatives, party workers and common people.”

The swift action in the case, a cousin of one of the accused felt, was vindictive. “Some of us had formed an unregistered group called ‘Bismil Sena’. All the five accused in the case were part of the group. While most of us are engaged in rescuing, feeding, and treating stray animals, we also use social media to point out the government’s high-handedness and negligence from time to time,” Aditya Singh Tomar, cousin of Ajay Pratap Singh Sikarwar, told The Wire.

He said that in recent times, the group has pointed out corruption at the local Jiwaji University at Gwalior and raised questions on the lack of government support to migrant labourers returning home from bigger cities. “We also criticised the Citizenship (Amendment) Act that the Union government had passed without much discussion. Our campaigns have annoyed many local BJP workers in the area,” he said.

Tomar, an undergraduate student of political science at Banaras Hindu University at Varanasi, said that it was surprising that the police filed such a stringent FIR in a frivolous case like this one.

“The complaint in the case clearly looks like some sort of vendetta. The FB post was obviously satirical. One thing to be noticed is that the case was filed at Porsa police station although all the accused persons are from Jaura village, around 100 kilometres away. The complaint was not referred to the cyber cell, as is normally done,” he said.

Ever since the FIR has been registered against the members of the Bismil Sena, local BJP workers have been threatening them on social media with complete impunity, Tomar added.

The Wire reached out to Morena SP Asit Yadav for a comment. He said he was busy at a meeting and would call back. The story will be updated if and when his response comes.

* The names of the three minors have been withheld