What Decides Where Big Cats Live in India – Conservation Policies or Politics?

The most popular rationalisation for why Gujarat doesn't want to share its lions seems to be pride – a tack that also allows it to hide the influence of the tourism lobby. 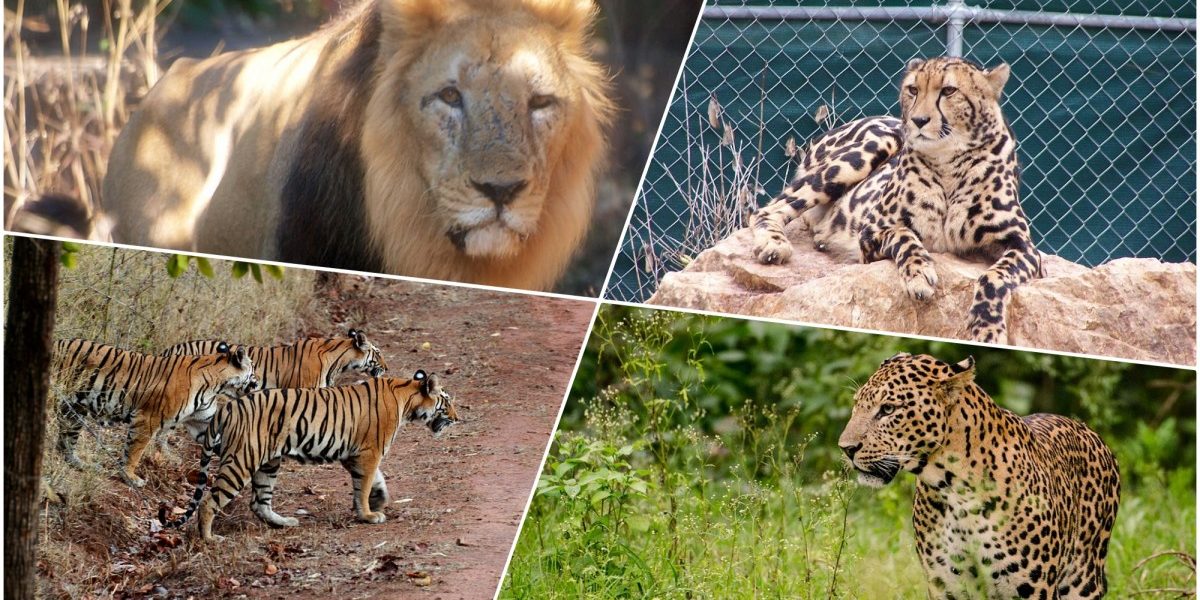 The four big cats (clockwise from top-left): A lion in Gir, a king cheetah somewhere in Africa, an Indian leopard in Nagarhole and a Bengal tigress with her cubs in Bandhavgarh. Full credits in the footer.

During his Independence Day address this year, Prime Minister Narendra Modi said that in the coming days, the government would launch a ‘Project Lion’ to help conserve Asiatic lions.

As such, Project Lion joins a list of projects advanced by previous governments that the Modi government has rehashed.

On August 16, an unnamed ministry official reportedly said Project Lion won’t be involved in translocating lions. He was referring to the process of moving some Asiatic lions from Gir in Gujarat to Kuno in Madhya Pradesh, like the Supreme Court had ordered in April 2013.

The court noted that the translocation is “of utmost importance … to preserve the Asiatic lion, an endangered species” and called for it to happen within six months.

In 1994, a canine distemper virus outbreak in Tanzania’s Serengeti national park had killed around a thousand lions. An epidemic of similar magnitude in Gujarat’s Saurashtra region could wipe out the local population of Asiatic lions there. So the court wanted the population to split up – to not have all eggs in the same basket.

However, seven years later, the translocation is still pending.

According to Ramesh, “the reason is only one. One man” – alluding to Prime Minister Narendra Modi and his oft-expressed reluctance to allow his home state to part with its lions. This argument is strengthened by forest officials in Gujarat being open to translocations within the state. 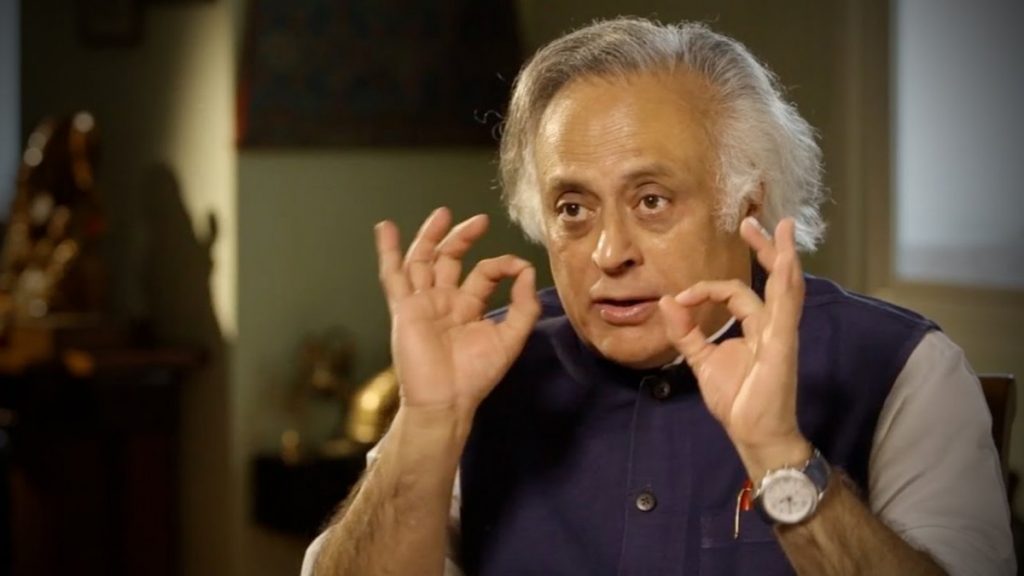 The first plan to establish a second home for India’s lions was born in 1995. The government drew up a 20-year-vision to be deployed in three phases. The first major problems crept up in the second phase: between 2000 and 2005, even though 24 villages in Kuno with more than 1,500 families had given up their ancestral land to make way for the lions, the Gujarat government, under the chief ministership of Modi, refused to move the cats.

This dispute went to the Supreme Court and culminated with the order to set up a second lion population in Kuno. But while Gujarat hasn’t complied, multiple disease outbreaks and inbreeding have only strengthened the case for a second home.

Union environment minister Prakash Javadekar and the forest departments of Madhya Pradesh and Gujarat have yet to explain why they haven’t followed through.

The most popular rationalisation for why Gujarat doesn’t want to share its lions seems to be Gujarati asmita – or pride. This tack gives the state an excuse to claim it is doing the right thing, and hide the influence of, among others, the tourism lobby.

India’s Asiatic lions all live in the Saurashtra region. This localisation has created opportunities for ‘lion tourism’ that “bureaucrats, politicians and local communities” have exploited “to gain mileage and economic privileges, often at the cost of the long-term conservation interests of Asiatic lions,” according to a paper published in August 2019.

While the efforts of local people have helped conserve lions in the region, the paper continues, the state monopolised the lions and used them “as an instrument of political and bureaucratic gain”, which influenced “the public psyche” and kept the Gujarat government reluctant to move lions to Kuno National Park in Madhya Pradesh.

As if mirroring this reality, the local sentiment in Kuno is in favour of reintroducing lions to Madhya Pradesh.

“Politicians from Sheopur district,” where Kuno is located, “sometimes ask the [state] government about lion introduction… They have seen how Ranthambore’s tourism industry has developed,” Dharmendra Khandal, a conservation biologist who works out of Ranthambore National Park, told The Wire Science.

According to him, the politicians have made up their minds about the benefits of translocation to the extent that they have already relocated 24 villages and the underlying land converted from revenue to forest land to host the big cats.

Khandal also said the local forest department hopes to reintroduce cheetahs as well, again to improve tourism revenue, and has accordingly been “prepping” the landscape.

The National Tiger Conservation Authority (NTCA) previously identified the scrub habitat of Kuno-Palpur in Madhya Pradesh as one of a few areas to relocate African cheetahs. (The others include the grasslands of Velavadar in Gujarat and Tal Chhapar in Rajasthan.)

The Kuno landscape consists of dry deciduous forests. “It might look like a grassland in some areas but this is because, when villages were relocated [to make way for the lions], agricultural fields that were left behind became grasslands in the first stage of succession,” Khandal said.

In the next stage, these grasslands become scrub forests and, in the third, forests with bigger trees. “But [the forest department] is uprooting shrubs and trees and making false grasslands because they want to introduce cheetahs [in Kuno National Park].”

When he asked forest department officials why they wanted cheetahs and lions, he said they told him that Madhya Pradesh already has six tiger reserves and many sanctuaries and national parks that have both tigers and leopards. With cheetahs and lions in the mix, the state will have all four big cats for tourists.

But Khandal isn’t convinced. “The area is a natural woodland and is not suitable for cheetahs, and the leopards here can also kill cheetahs,” he said. A story in reverse

India has thus far undertaken two major translocations: when tigers were reintroduced to Sariska in Rajasthan and Panna in Madhya Pradesh, after both these reserves had been ravaged by poachers.

Jairam Ramesh oversaw both these exercises, in 2008 and 2009, as the country’s environment minister at the time – and he went “purely by the advice of the NTCA and Wildlife Institute of India.”

There is a well-known nexus between politicians and businesspeople engaged in marble-mining, stone-quarrying, etc. in and around the Sariska tiger reserve in Rajasthan.

Ghazala Shahabuddin, a senior scientist at the Centre for Ecology, Development and Research, Dehradun, said the mining lobby in the Aravalli mountains, which run from Delhi to Gujarat, is “very strong” – and they seemed to be keen to “denotify the [Sariska] tiger reserve” once it had lost all its tigers.

However, a Rajasthani asmita – rooted in the shame of having a tiger reserve with no tigers – eventually moved the needle, with a dash of politics.

“Rajasthan’s [Ranthambore and Sariska reserves] were among the first ten tiger reserves in the country under Project Tiger,” Shahabuddin said. These lands previously belonged to Maharaja Jaisingh of Alwar.

A tiger in Ranthambore, Rajasthan. Photo: Christopher Kray/Flickr, CC BY 2.0

A similar story played out in reverse at the Satkosia Tiger Reserve in Odisha.

In 2018, two tigers – a male from Kanha and a female from Bandhavgarh (both in Madhya Pradesh) – were brought to Satkosia, as the first two of a planned six. However, the project was suspended last year after the male was killed by a snare that villagers had set for wild pigs. The female tiger now lives in an enclosure.

“She was forced into the human dominated, prey-depleted parts of the park because the only undisturbed and prey-rich portion of the core area was the territory of the last remaining resident tigress of Satkosia,” Aditya Panda, an Odisha-based conservationist, told The Wire Science.

According to him, Satkosia’s management hadn’t planned the reintroduction well enough, and rushed it even before they had the requisite number of trained staff and other resources.

The local forest department has also failed to gain the trust of the same people. So all said, it doesn’t look like tigers are returning to Satkosia anytime soon.