Having exhausted all domestic means in his quest for justice, Qalandar Khatana now wants the UN to look into allegations of gross human rights violations in J&K. 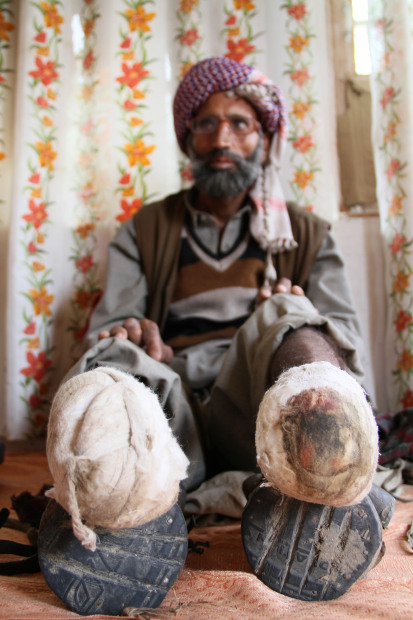 Srinagar: On a recent May morning, Qalandar Khatana stepped out of his home in Kothiya village, located near the border, after carefully strapping on his prosthetic legs. He picked up his crude wooden crutches, slung a small makeshift backpack over his shoulder and proceeded painfully on foot to Halkamori – the closest roadhead some four kilometres away.

From there he found some transport to Kalaroos. He then took a shared Sumo service to Kupwara and onward to Srinagar, his arduous journey reflecting his commitment to an informal group called ‘Survivors for Truth and Justice’.

Khatana, who lost both his legs after enduring torture, allegedly at the hands of the security forces, is a member of this group, which also comprises victims of sexual assault and families who’ve faced enforced disappearances and civilian killings in Kashmir. He joined the group on May 10 to make an appeal to the international community, pleading for the UN to look into allegations of gross human rights violations in the state.

These victims claim they have exhausted all domestic means of protest in their struggle for justice. They have carried out demonstrations in parks and other public spaces, have doggedly pursued their cases with the State Human Rights Commission (SHRC), a quasi-judicial human rights body formed in 1997, in the local courts, in the Jammu and Kashmir high court and even in the Supreme Court of India. However, not even a single case has been resolved and the denial of justice has left them dispirited. 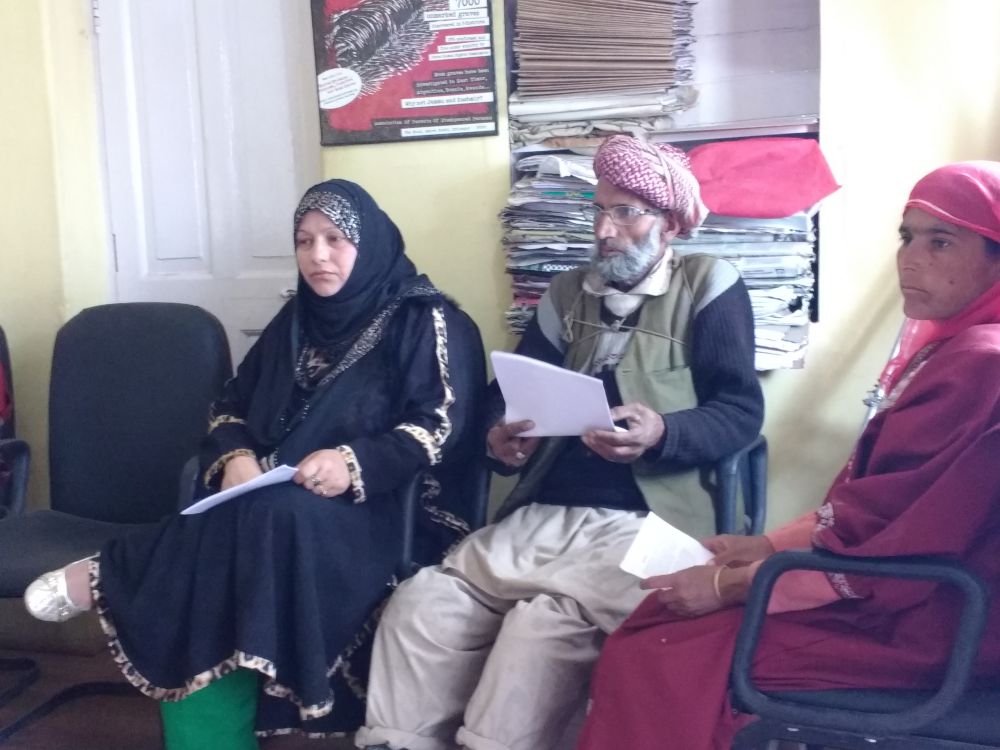 Qalandar Khatana (centre), a victim of severe torture, with two other members of the group ‘Survivors for Truth and Justice’, who are appealing to the international community as they have exhausted all available means of peaceful struggle for justice. Credit: Freny Manecksha

For Khatana, who underwent multiple incidents of torture for four years, the ordeal began in the 1990s, shortly after militancy erupted in Kashmir. A member of the Gujjar community, his home is located in one of the five villages in the remote highlands near the Line of Control. The conflict has had an especially adverse impact on the life of residents of the region.

Khatana says he and other villagers were often accused of crossing the border by Border Security Force (BSF) personnel but, up until the 1990s, the borders had been permeable and fluid.

“We used to roam with our livestock freely and could go into the forests. There was no one telling us where we could go or not go. Then they fenced off a portion of our own lands and began calling it the border and clamped down on us ferociously.”

One night in 1992, there was a knock on his door and Khatana was dragged away by BSF personnel to their camp at Mori. He was then accused of being a guide who had helped militants across the border.

“They kept interrogating me, beating me, even hanging me upside down,” Khatana said.

Torture by the security forces

In the months that followed, he claims he was taken from one camp to another, where he was tortured by the BSF and Special Task Force personnel. He claims they would take him atop a mountain and roll him down the slope. He was forced to do hard labour and even held in solitary confinement.

Six months later, he was brought to Srinagar’s Papa II, an interrogation and torture centre. He claims that the flesh from his waist and elsewhere was sliced with a blade, and that he was then forced to eat bits of it.

One day, a crude attempt was made to hack off his legs.

“I passed out and when I regained consciousness, I found my blood-stained limbs had been tied with strips of cloth. I learnt fellow inmates at the torture centre had torn off the sleeves of their shirts and had tried to stop the bleeding.”

He was then sent to the Kot Balwal jail in Jammu where he stayed for about four years. His wounds had gotten infected with maggots and eventually his legs had to be amputated. He was then released and received treatment at the Bone and Joints Hospital in Barzulla in 1996.

Devastated by his experiences, and lacking education and any other means of support, he returned home, too frightened to approach the police or file any complaint.

“I was terrified. It was almost as if it had been drummed into me that I had no right to life. I wasn’t sure if I would be allowed to live even after my release.”

Anthropologist Mohamad Junaid, who also grew up in Kashmir in the 1990s, observes that security force personnel use torture not so much to extract information but to send out a message through the broken and defiled bodies, and to break the people’s will and determination.

“This [is] psychosomatic warfare,” he adds.

Khatana’s worries were further intensified after he learnt that his wife too had been tortured. Being kicked violently in the chest left her with broken ribs that did not heal properly. She remained confined to her bed until her death a few years later, leaving Khatana to provide for and look after their three children – two girls and a boy.

Unwilling to be obligated to any organisation, Khatana believed his only option was to beg. People would hoist him on their shoulders and he would sit outside various mosques appealing for alms.

It was outside one such mosque that human rights activists came upon him and helped him file a plea with the SHRC.

After an inquiry, the panel concluded that he had been severely tortured and that his case was only one among a bunch where similar amputations had to be carried out because of the hacking methods used.