In the background of a photo clicked shortly afterwards stood the Coast Guard plane, CG 789, he flew over in.

This choice needs to be understood.

The Union Territory is connected by air to Kochi. Even at short notice, a two-way flight ticket from Daman to coral-fringed Lakshadweep costs about Rs 30,000. In contrast, Patel’s flight might have cost Lakshadweep as much as Rs 23 lakh.

According to a PTI report, Patel had at least one reason to avoid Kochi. “Anticipating that the administrator would be travelling via Kochi to Lakshadweep, two Congress MPs from Kerala T.N. Prathapan and Hibi Eden had gone to the Kochi international airport to meet Patel to convey their protest against what they called as anti-people reforms measures on the islands. It did not materialise as Patel reportedly opted for the Goa route to go to [the] islands.”

The Wire sent questions to Patel, his personal secretary A. Anbarasu, Lakshadweep collector Asker Ali and Sushil Singh, the bureaucrat in charge of Information, Food & Civil Supplies and Labour, asking why he had taken the Coast Guard plane. They did not respond.

Why the decision matters

The charter was, at the very least, the second time Patel has taken a Coast Guard plane to Agatti.

On February 21 as well, the administrator had taken a Coast Guard Dornier from Daman to Agatti and then back again. The bill came to Rs 23.21 lakhs. 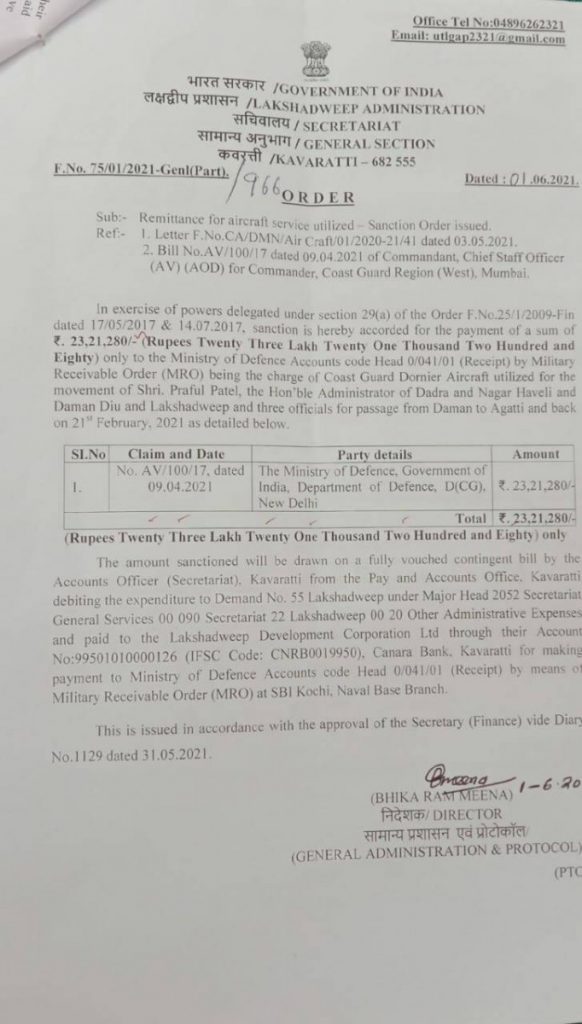 Order sanctioning the payment of Rs 23.21 lakh for Patel’s Coast Guard Dornier flight from Daman to Agatti and then back again.

There are other trips, an islander in Kavaratti, the UT’s administrative centre, told The Wire on the condition of anonymity.

According to him, Patel’s travel expenditure has “crossed Rs 90 lakh”. In our questionnaire, The Wire asked Patel – and the officials named above – for the number of flights he has taken to the islands, and an estimate on the expenditure incurred till now.

These are important questions. In Lakshadweep’s Demand for Grants (2021-22), a sum of Rs 20 lakh had been earmarked for “domestic travel expenses” by the governor/administrator of the islands. In February, as the letter above shows, Lakshadweep paid for Patel’s trip on CG789 by dipping into allocations like secretariat general services and other administrative expenses (OAE).

There are three issues here. First, according to the islander, the OAE fund is running low as well. If this runs out, will the budgets of other functions be reappropriated next?

Second, it’s not clear if the administration has the power to redeploy funds. “Budget allocations for Union Territories – which do not have their own assemblies – are done by parliament,” said a former finance secretary. “It’s possible to take money from another head but it would still require the approval of parliament. If they have not done so, the CAG [Comptroller and Auditor General] might ask for this money to be recovered.”

The Wire asked Patel and his officials if they can use OAE funds for travel expenditure. There was no response.

Third, this increase in spending on the administrator comes at a time when he is cutting back on state expenditure on jobs and welfare.

No rules for the ruler

On May 24, his administration tightened the norms for medical evacuation. 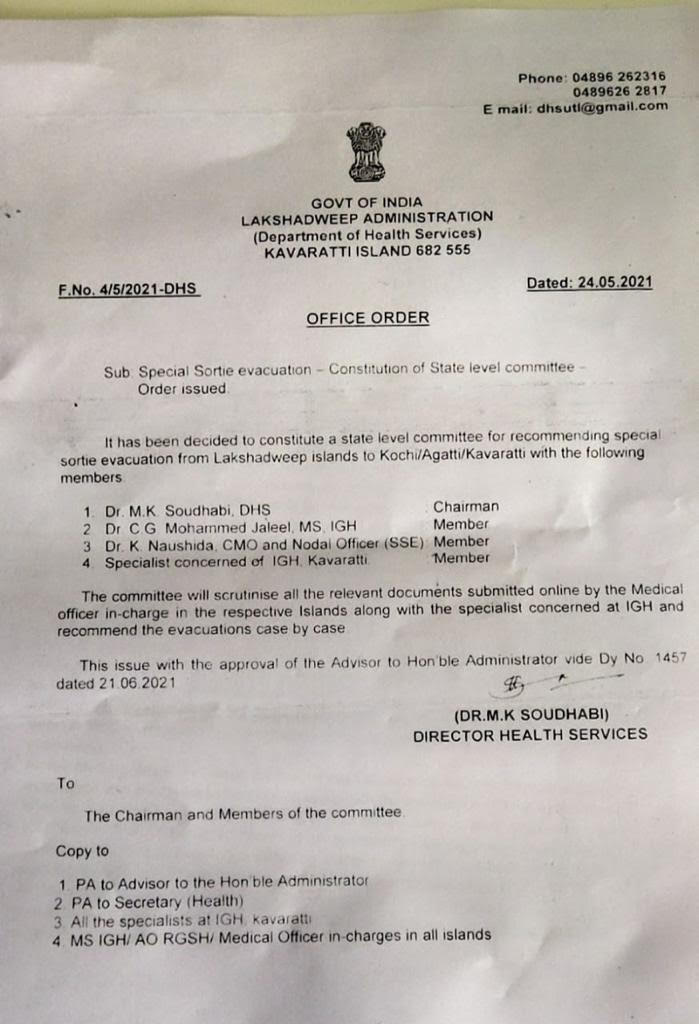 A four-member committee, said the administration, would now “scrutinise all the relevant documents submitted online by the medical officer in-charge in the respective islands along with the specialist concerned and recommend the evacuations case by case”.

This notification – issued while Lakshadweep was in the throes of COVID-19 – didn’t contain an explanation. Nor did it stipulate a time period in which applications would be processed.

“Medical emergencies till now have been dealt with very humanely,” said a person working on the islands. “If a person needs emergency medical help, three choppers were kept for it. Even the Administrator’s chopper has been used for emergencies in the past.”

The new system makes it harder for people to access these, she said. “Internet connectivity is poor on the islands. And now, this administration wants a request over email for medical evacuation by chopper. Then, four people will evaluate the situation. And only then will (patients) get the facility.”

In tandem, the administration has axed jobs. In February, in the days after the flight for which Lakshadweep had to pay Rs 23 lakh, Patel’s administration fired 193 workers from the tourism department and another 103 from the mid-day meal programme. The agriculture department saw lay-offs as well. So did other departments. Among those who lost their jobs, as The News Minute reported, were “30 contract surveyors in the Revenue Department and scores of others from the Women and Child Development Department and Health Department.” More lay-offs are expected.

Others have been told to stop coming to work without a clear explanation on when work will resume. In May, 200 members of an anti-poaching squad called marine watchers were disengaged pending further notice. Employed with the environment department, they were paid Rs 15,000 a month. That works out to a monthly outlay of Rs 30 lakh on salaries – and goes into protecting the local marine ecosystem, which supports most local livelihoods.

The administration, however, considers these functions dispensable but views a chartered flight as essential.

What we see is an extraordinary impunity. Not only is Praful Patel’s administration not bound by the rules it makes for the locals – we also saw this in his refusal to quarantine as per local COVID-19 guidelines – it is also unaffected by Central government dictats.

On June 10, four days before Patel took his flight, Nirmala Sitharaman’s finance ministry sent out a letter to all ministries and departments, asking them to “curb wasteful/avoidable expenditure” and “cut controllable expenditure” by a fifth. One of the suggested areas for economising?

Finance ministry circular on avoidable expenditure by The Wire on Scribd