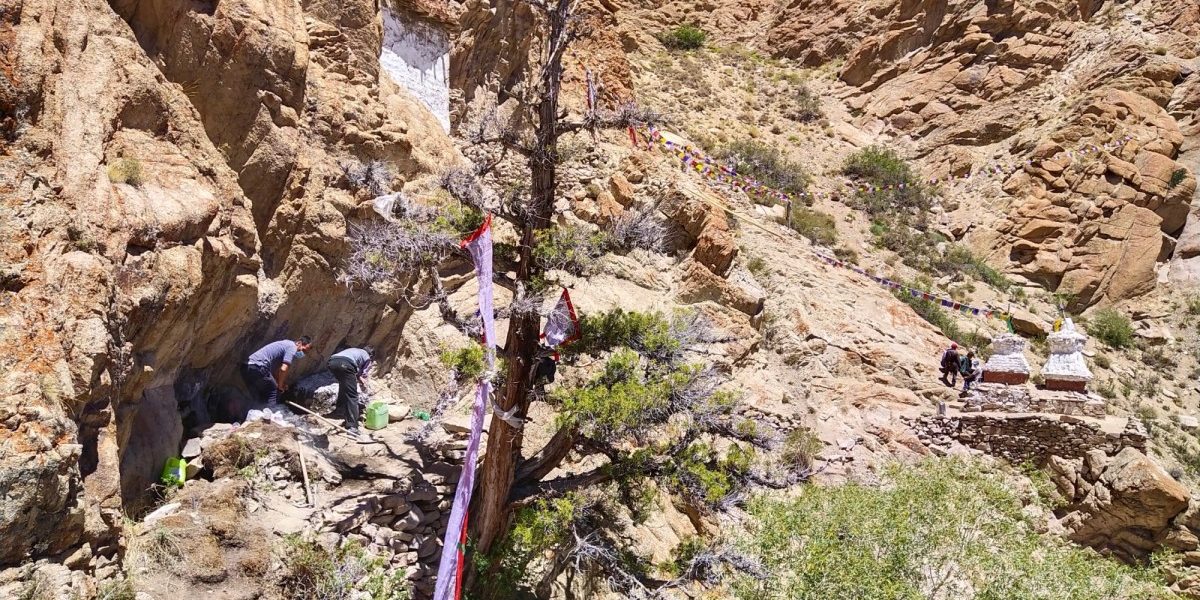 Dakmar is a cave hermitage situated four km north-west of my village, Hemisshukpachan. It is dedicated to a legendary duba, hermit monk, named Kasal Kosal who often came to Dakmar for long-duration meditation, ts’ams. The hermitage also served as a quarantine site for the 16th century Ladakhi king, Jamyang Namgyal, when he suffered from ze-nad, leprosy. The king recovered at Dakmar under the supervision of Kasal Kosal, and later under Choje Danma, a Tibetan monk who specialised in treating ze-nad.

What made Dakmar an ideal place for extended meditation or as a quarantine quarter for the king was the spring water located near the cave. To our dismay, the spring dried up two years ago. The juniper tree, considered sacred, sustained by that spring is also half dead.

Ever since Ladakh has become a union territory, there have been shrill cries made by administrators, local politicians and the media about increased budgetary allocation. The Union budget 2020-21 allocated Rs 5,958 crore for Ladakh, a significant jump from the Rs 250 crore that Ladakh received when it was part of the undivided J&K. Moreover, there were reports of funds available for the re-development of “touristy places” in Ladakh. These reports reached the youth association of my village. The association approached me in May 2020 to write a proposal for the renovation of Dakmar.

The fund for Dakmar’s renovation is yet to arrive. However, even if it does come, and Dakmar stands renovated, the spring will not come back to life. The dead spring at Dakmar stands as a symptom of global industrial capitalism and its reckless imitation by Ladakhis.

The funds can only renovate or built physical structures like Dakmar or new roads, but it cannot arrest the dying of springs, receding of glaciers and disappearing of birds. Nor can such fundamental ecological issues be tackled at the local level. But the UT status had provided an opportunity to set Ladakh apart, as an example of a green and local economy for the world to follow. Instead, barely a month after the official separation from J&K, the administration bought an SUV costing Rs 30 lakh for the top bureaucrat in Ladakh.

In Ladakh’s first year as a UT, bureaucrats have been allegedly empowered, while locally elected representatives are slowly disempowered. In April 2020, a 45-minute audio clip of a conference call among Ladakh’s BJP politicians and party high command surfaced. In the audio, politicians from both Kargil and Leh are complaining about how the UT administration is taking unilateral decisions without consulting elected leaders. Someone purported to be Jamyang Tsering Namgyal, BJP MP from Ladakh, uses the term “dictatorship of the UT administration” to describe the state of affairs.

In Ladakh, the most important locally elected representatives are the councillors of the Ladakh Autonomous Hill Development Councils (LAHDCs) of Leh and Kargil. LAHDCs are statutory bodies formed in mid-1990 as a compromise to quell the movement to demand a UT with a legislature for Ladakh. This demand, however, has been from the people of Leh, not Kargil.

With 26 directly elected members and four nominated members, the councils enjoy executive power over subjects like health, agriculture and education in their respective districts. The head of the council is called chief executive councillor (CEC), who is aided by three or four executive members. In order of precedence, the CEC is equal to a state cabinet minister. However, in practice, even before the UT status, the CEC’s role often overlapped with that of the district magistrate who is also known as chief executive officer (CEO). Expectedly, the CEC and CEO often clashed, but it was a clash between equals.

However, the UT status saw the appointment of several senior IAS and IPS officers. Expectedly, the elected councillors dwarf in comparison to high-level bureaucrats. And within few months of Ladakh becoming a UT, allegations of sidelining of the LAHDCs came from the councillors themselves. Notably, the BJP enjoys a majority in Leh’s council, and in Kargil, the council is run by a coalition between the National Conference and the BJP.

In the leaked audio, purported local BJP politicians are complaining to their high command about the reported FIR against the health executive councillor of Kargil and shutting down of the offices of the LAHDC, Leh by the administration during the initial phase of the nationwide lockdown.

The discord between the administration and the LAHDCs got worse during the evacuation of stranded Ladakhis from the mainland during lockdown. The elected representatives were coming under pressure from their electorates to bring back their loved ones. The administration, on the other hand, was citing home ministry guidelines to say that there is no evacuation policy in place for the UT. With no powers to order the bureaucrats, the CEC, Leh with his executive councillors sat on a dharna outside the Raj Niwas, Leh to put pressure on the administration to bring back the stranded Ladakhis. That photograph of our CEC wearing our gonchas, Ladakhi attire, sitting outside the gate of Raj Niwas encapsulates Ladakh’s first year as a UT.

On another note, the concentration of powers in the hands of bureaucrats is ominous for tribal rights. For a population of merely 2.74 lakh, Ladakh has an advisor to the lieutenant governor, a division commissioner, a commissioner secretary, inspector general of police, two district magistrates and two senior superintendents of police. They are all IAS and IPS officers, and are answerable to the Union home ministry via the LG.

After getting UT status, Ladakhis, as a scheduled tribe (ST), probably have the highest number of IAS and IPS officers per person, without any tribal community safeguards.  I am sure that administration will run smoothly in Ladakh with powerful bureaucrats stationed here. However, the fear of the Orwellian state cannot be easily brushed aside.

Moreover, efficient administration often runs counter to customary tribal practices and rights. Take, for example, the practice of conflict resolution in Buddhist villages in Ladakh. Conflicts are resolved at the village level involving close relatives, elders and the goba, traditional village head. The process is known as shaks-trims and the underlying philosophy of shaks-trims is peace and compromise on both sides. An efficient and robust police and judicial system, without recognition of some of the customary norms, will take all Ladakhis to police stations and courts.

The constitution provides for three mechanisms for providing safeguards for tribal communities. First is full statehood with additional special powers like Nagaland. Second is provisions under the fifth schedule of the constitution for tribal-dominated regions within states. Lahual-Spiti in Himachal Pradesh and Rayagada in Odisha enjoy fifth schedule protection. In these “Scheduled Areas”, transfer of land from tribal to non-tribal is prohibited, customary practices are protected and through the Provisions of the Panchayats (Extension to Scheduled Areas) Act, 1996, gram sabhas are empowered to ensure self-governance.

For many Ladakhis, the initial few months went by on the hope that the Central government will extend one of the tribal safeguard provisions to Ladakh. With the lack of any overtures regarding safeguards from the government, students organised two peaceful processions and a hunger strike. Then some student leaders were sent on a study tour by the UT administration to sixth schedule areas in Assam and Meghalaya. The local unit of the Congress party also started clamouring for the sixth schedule.

As demands for tribal rights were being made by Ladakhi youth, local BJP leaders continually spoke against the need for constitutional safeguards. They often argued that it would impede the development of Ladakh. Efforts by politicians from the local Congress unit, at the same time, seemed like too little, too late.

Constitutional safeguards for Ladakh became an important point for discussion, debate and activism in Leh. All this while, the people of Kargil raised their voice against the bifurcation of the state. However, the pandemic and Chinese offensive on the border pushed the issue to the back-burner.

Where are the jobs?

Apart from constitutional safeguards, Ladakhi youth felt disheartened at the lack of employment opportunities, one of the central promises of the new administrative status of Ladakh. In conversations with the student community, three main issues regarding jobs have come out.

First, there has been no government job openings in Ladakh since it became a UT. The understaffed administration has been bringing in government employees on deputation from J&K and the mainland. Second, until now, the administration has not come up with a recruitment policy. Third, Ladakh lacks a public service commission. The fate of young Ladakhis who have spent their best years of life preparing for Kashmir administrative and police services hang in limbo. For jobs notified by the J&K UT, Ladakhis are not eligible to apply. Many fear that they might cross the age limit to apply for such positions, even if a recruitment body for Ladakh is established.

Also read: Ladakh is Winning the War on COVID-19 but the Voices of the People are Diminishing

Be that as it may, at the village level people say that there has not been any noticeable change after the UT status has arrived. The huge budgetary allocation has not yet percolated to rural Ladakh. Moreover, villagers say that usual developmental works under the Mahatma Gandhi National Rural Employment Guarantee Scheme were impeded because of the pandemic.

The changes, it seems have come only in Leh, with new SUVs, news offices, Raj Niwas and so on. Nevertheless, the accounts of protests and activism for constitutional safeguards led by the student community have reached the elders in the villages. In the last two months, I overheard elders uttering the term ‘sixth schedule’ in conversations amongst themselves. They are aware of problems like the lack of job opportunities for the youth and the feebleness of elected councils.

Since August 5, the people of Ladakh have been discussing, debating and fighting for constitutional safeguards. But it is worth remembering that constitutional protections for tribes to sustain themselves is also so that they can continue to live in ways that are different from mainstream communities. The safeguards and autonomy for self-rule are not just meant as way to secure more funds. The autonomy is so we can live in ways that keep our springs alive.

Padma Rigzin is a research scholar from Ladakh.