Even After Abolishing It, Centre Collected Over Rs 1,300 Crore Under Krishi Kalyan Cess

An RTI response has shown that the government continued to collect money under the cess even after July 1, 2017.

Farmers plant saplings in a rice field on the outskirts of Srinagar June 10, 2015. Photo: Reuters/Danish Ismail

New Delhi: The Narendra Modi-led Central government has collected tax worth more than Rs 1,300 crore under the Krishi Kalyan Cess (KKC) despite having abolished it, information received through the Right to Information has revealed.

The Ministry of Finance had gradually disposed of several cesses with the Goods and Services Tax (GST) rollout, including the KKC which was abolished on July 1, 2017.

However, the Directorate General (Systems and Data Management) of the finance ministry’s revenue department has replied to an RTI query stating that Rs 1,340.55 crore was collected under Swachh Bharat Cess after that date.

On March 6, 2018, minister of state for finance Shiv Pratap Shukla had told the Rajya Sabha in response to a question that both the Swachh Bharat Cess and the KKC have been abolished since July 1, 2017.

Additionally, a press release issued by the finance ministry on June 7, 2017 also stated that a number of cesses, including the KKC, would be repealed from July 1, 2017 to implement the GST.

However, according to information obtained from the Directorate General  (Systems and Data Management), a total of Rs 1,340.55 crore was collected under the KKC between July 1, 2017 and January 2019.

Collecting money in the name of a tax that no longer exists raises serious questions about the government’s intentions. 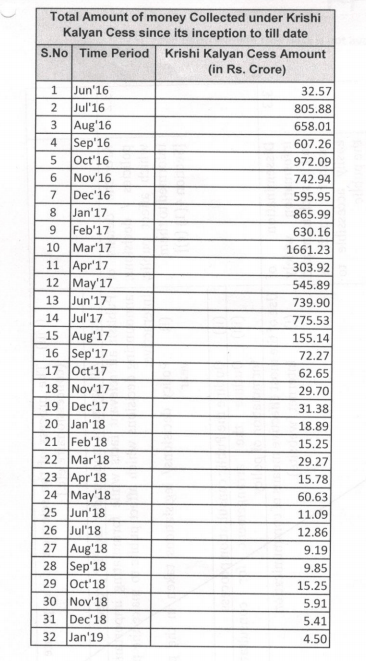 The KKC was implemented in the year 2016 to be levied on all taxable services at 0.5%. The government claims that the tax was imposed in order to provide funding for agricultural policies and promote initiatives towards agricultural reform.

Interestingly, the government has not yet revealed how the money, which was collected in the name of a cess that does not exist, is being spent.

Where was the KKC money spent?

The agriculture ministry claimed that the money received under the KKC during 2016-17 and 2017-18 has been spent on the government’s crop insurance scheme, Pradhan Mantri Fasal Bima Yojana (PMFBY), and subsidies on loans to farmers.

However, the ministry has provided no information detailing the expenditure of money obtained under the KKC after it was abolished.

The ministry also failed to give a clear explanation about where exactly the KKC money was spent under the PMFBY, as the ministry did not provide detailed information on this.

The Wire analysed the government’s response given in the parliament regarding the KKC and found that the government had provided information which was either incomplete or ambiguous.

The minister of state for finance has also not detailed how the money collected from the abolished cess is going to be spent under the PMFBY.