Shivraj Singh Chouhan has been referencing the "bulldozer" with relative frequency at public speeches. From violence to crimes against women, the CM has liberally ordered destruction of property of the accused as punishment. 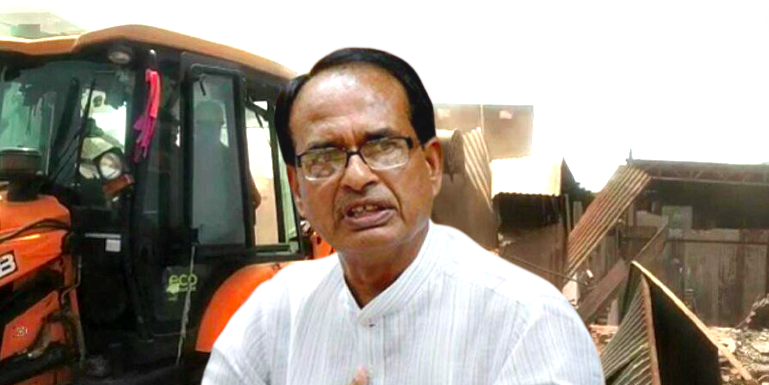 Shivraj Singh Chouhan. In the background is a bulldozer destroying property of Ram Navami violence accused in Khargone of Madhya Pradesh. Photos: Twitter and PTI. Illustration: The Wire

New Delhi: Local administration in Madhya Pradesh have demolished several properties associated with alleged suspects of the Ram Navami violence in Khargone, drawing questions on the legality of such a move and who his drive has affected the most.

Three areas of Madhya Pradesh’s Khargone saw reports of stone-pelting and arson during Ram Navami processions on April 10. As many as 80 people have been arrested. Meanwhile, numerous videos of bulldozers ramming into shops and buildings – most of them allegedly owned by financially disadvantaged Muslim families – have been shared on social media in the past day.

The Hindu has quoted the Indore Divisional Commissioner Pawan Sharma as having said that the number of destroyed houses and properties is 45. Times of India has reported that 50 properties have been destroyed. The real number of houses destroyed may be higher.

Sharma has told the newspaper that the move was necessitated because “not all, but some of the accused involved in the communal riots” who own these properties “were encroaching on public land and action has been taken based on land revenue records.”

In the absence of a court judgment calling for such a demolition, Sharma sought to justify the move claiming that “if an illegal structure is there, we can take action under relevant sections.”

He also said that the idea is to “instil fear of financial losses among the accused.”

Police’s drive to “instil fear” came amidst reports that fresh violence has been seen in Khargone on the night of April 10 and 11 in spite of prohibitive orders. Early on April 11, an elderly woman was allegedly hurt when a group of men in uniform barged into her house and an adjoining temple.

This was happening at 03.00 am in Khargone. Men in uniform were seen breaking gate of Bilal Masjid. Right in front of this Masjid lives an old woman with her family. No male members in the house. She asks the men to stop. Uses the word 'beta' for them.

Vehicles were allegedly burned after a Hindutva mob attacked a Muslim man on the Khargone-Khandwa Road.

Almost 36 hours after curfew, just a while ago, garage of Mubarik Khan was set on fire by Hindutva mob in Khargone-Khandwa road MP. 4 vehicles burnt completely. pic.twitter.com/rh8S4GClt1

The unique demolition drive undertaken by the Madhya Pradesh administration is, however, the latest in the Shivraj Singh Chouhan government’s stated objective of ensuring justice through such means.

Also read: Hindus Are Morally Obliged to Oppose the Anti-Minority Politics of Hindutva

The Prevention of Damage to Public and Private Property and Recovery of Damages Bill 2021 was passed without a discussion. Through it, tribunals could recover up to twice the cost of alleged damage.

“As I have said earlier, those who throw stones from their houses and cause damage to public and private property will now come under the ambit of law. They will not be spared. This bill has also been brought in so that anti-social elements and those causing riots will now fear the law,” the Madhya Pradesh home minister, Narottam Mishra, had then said.

In late December itself, The Wire had reported on what was perhaps the first instance of the implementation of the law. After rightwing Hindutva groups defied police instructions and entered a Muslim majority area during what was a ‘Shourya Yatra’ in Manawar tehsil of Madhya Pradesh’s Dhar district, a clash erupted with both sides pelting stones at each other. Police, however, only arrested Muslims among those accused. They also razed a Muslim man’s house for harbouring three of the accused there and not having “building permission.”

From earlier this year, chief minister Chouhan himself began referencing the “bulldozer” with relative frequency.

Amar Ujala, in a video report, highlighted Chouhan saying on March 22 during a visit to Raisen where a tribal youth had died in a fight between two communities, “Mama’s [pointing to himself] bulldozer has set off and will not stop unless wrongdoers are not entirely destroyed.”

Times of India has reported that afterwards, the chief minister ordered the demolition of the houses of people accused of starting the riot that led to the death of the youth. Fourteen people have been arrested in the case and FIRs name a total of 200 suspects.

On the same day, within hours of Chouhan ordering bulldozer action against three Muslim men accused in the case of the gangrape of a minor in Sheopur, their houses were razed. His administration has claimed that the houses were built on encroached government land, however, the government release itself made it clear that the intention was “punitive”.

“Chief minister Shivraj Singh Chouhan directed the Sheopur administration to take punitive action against the accused involved in the gangrape of a minor girl. Their houses were demolished in police presence,” a government statement said.

On March 31, 2022, at a function in Rewa, Chouhan asked top policemen “when will these bulldozers be used” while referring to a rape case that occurred in a government-run guesthouse in which a spiritual leader is an accused.

His mention of bulldozer justice has earned Chouhan the epithet of “Bulldozer Mama” – he first began calling himself ‘Mama’ after introducing a slew of schemes to benefit the girl child. The term is a take off from “Bulldozer Baba”, which is what Uttar Pradesh chief minister Adityanath’s supporters call him. In Uttar Pradesh, razing of property associated with people accused in cases is common and was seen in the case of property connected with gangster Vikas Dubey and most recently, in Shaharanpur, where police cited a rape charge against two brothers to destroy parts of their house.

On April 11, a day after the Ram Navami violence, Chouhan’s social media handles uploaded a video of him addressing the public, in which he is seen warning people that if they “look in a wrong manner at a mother or a sister, then Mama will send [them] to jail…Nothing will be left of his shop or house.” He then refers to “gangsters, wrongdoers and rioters”.

Several on social media have questioned as to how the Chouhan government’s ability to destroy property even before cases roll into trial is viable.

BJP’s Bulldozer barbarity…How can the state governments of UP and MP unilaterally, without due process, smash the homes of those they charge of “stone pelting”? This is medieval behaviour…Shame!

Imagine driving on a highway and a traffic policewalla “accuses” you of speeding. Next morning, the govt sends a bulldozer to smash and destroy your car without giving you a chance to say anything.

This is the Bulldozer Model.

Imagine driving on a highway and a traffic policewalla “accuses” you of speeding. Next morning, the govt sends a bulldozer to smash and destroy your car without giving you a chance to say anything.

This is the Bulldozer Model.

Law isn’t a #Bulldozer. It’s a plough that prepares ground for green-shoots. Punishment without due process scorches crime without uprooting it #JustSaying

While many have questioned if the government is within its rights to take up such a punishment, legal scholar Gautam Bhatia has written on Twitter that, in fact, the courts do consider that it is.

“In 2009, the Supreme Court handed down a “suo motu” “judgment” where it said that if some destruction of property happened in a protest, and you were present, your property could get attached without needing to show you were responsible in any way,” Bhatia tweeted.

He added that the judgment was aided by “recommendations of the amicus curae appointed by the Court, including establishment legal stalwarts such as Fali Nariman.”

Bhatia goes on to finally say that collective punishment is normalised in India, but that even thought the courts find nothing wrong in it, it is still illegal.

To clarify – since I see people quoting this thread in response to questions about whether MP’s home demolition is illegal – yes it is, because it goes beyond the bounds of even all this. It’s just that “collective punishment” has long been normalised in our legal system.