The family of Ghulam Nabi Patel has been served with a demand for "rental arrears", while other families have been evicted from government quarters.

On March 24, 2020, the day the nationwide lockdown to counter the COVID-19 pandemic was announced, the family of the late Ghulam Nabi Patel, a pro-democracy Kashmiri politician, received a demand for outstanding rental dues of Rs 7,42,080 for their quarters at the MLA hostel housing colony in Pulwama.

The arrears date from 2003, when the family had been moved into these quarters because of threats against Patel from militants in Kashmir. The secure government quarters did not save Patel. On the afternoon of April 25, 2018, he was shot dead in an attack by militants at Rajpora, Pulwama. His family, now financially weak, continued to reside at the government quarters. As registered migrants from Jammu, they felt secure there since, to resettle migrants in Kashmir, the local administration guarantees housing.

Since the accommodation had been provided by the J&K government to protect Patel, the family believes that the eviction notice from the district commissioner (DC) and the demand for rental dues are proof of the harassment of pro-democracy politicians in Kashmir. 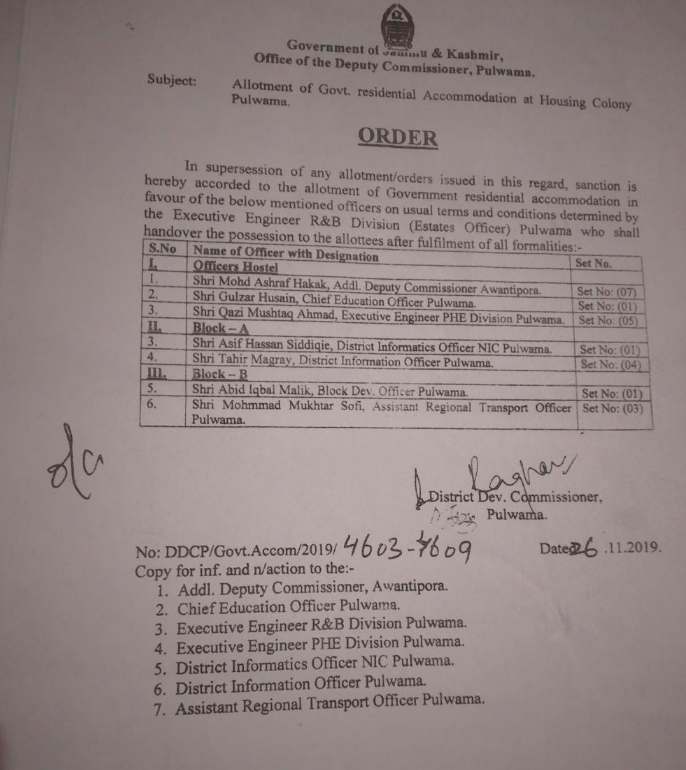 Notices of eviction have also been served to Pulwama-based politician Ghulam Nabi Niloora of the National Conference and Jan Mohammed, an independent candidate contesting from Wachi, Shopian. Niloora lost his father and his brother in attacks by militants and is the target of death threats himself. Jan Mohammed lost his father, Ghulam Mohammed Wagay of the PDP, to a militant attack. And Abdul Ghani, a political leader and advocate from Rahmoo, Pulwama, who was shot and killed in April 2017, had suffered interminable delays in his housing allotment.

“Our family cannot leave and why should we?” said a member of the Patel family. “The government knows well the threat we face for being part of a family that supports democratic politics in Kashmir. Was Ghulam Nabi Patel a stone pelter? No! He was a politician. Had we not been told to move here because of the threats he faced for his interaction with Indian democracy, he might have still been alive.”

In December 2019, the DC told the Patels to vacate their government accommodation. “We went to the DC’s office five times to explain why we live here, but we weren’t allowed to meet him. After that, we got a stay order on the matter from the High Court,” said the family member.

Because of his pro-democracy stance in a region tending towards anti-India militancy, Patel’s family has never felt safe.

“Sometimes I wonder why our father had to be a politician,” said 24-year-old Nighat, Patel’s daughter. “Why couldn’t he just be a daily wage worker? At least he wouldn’t have died the way he did. My father is a shaheed (martyr). He died for the ideas he believed in.” The 2003 official document of allotment of housing to G.N. Patel.

Nighat claims the PDP, the party her father worked with, has not helped her family in any way since her father’s death. She believes her father became a target for militants when he campaigned for former J&K finance minister Haseeb Drabu.

The family has been notified by a letter from the Roads & Buildings (R&B) department, Pulwama, that their quarters have been allotted to the assistant regional transport officer. However, according to Mohammed Yousuf Tramboo, district officer, R&B department and estates officer (Pulwama), the Patels’ quarters have been slotted as accommodation for doctors and other hospital staff dealing with COVID-19 patients.

The allotment and cancellation of government-owned secure housing is not within the R&B department’s purview. However the demand to the Patels for outstanding rent from 2003 to 2020 comes from them.

Militancy has been on the rise in Pulwama since 2016. But the area has also produced several pro-democracy leaders. Though the government at the centre read down Article 370 of the constitution of India to bring Jammu and Kashmir closer to mainland India, the administration’s withdrawal of secure accommodation to the families of pro-democracy leaders reinforces the locally-held belief that India and democracy are not on Kashmir’s side.

Tarushi Aswani was an editorial intern for The Wire.